For more than a decade, the Main Place Mall has been one of Main Street's most desolate and unimaginative buildings – and a symbol of downtown's struggles.

Originally envisioned as a thriving shopping hub in the midst of the city's business district, the dark modernist mall and its equally imposing tower have instead suffered from declining foot traffic and rising vacancies that deter visitors from even entering.

But that may be changing, with its owner now proposing to pump $75 million into the three-story retail complex for an upgrade and renovation, with a mix of offices and retail.

It's the latest in a series of downtown projects that, if completed, could bring a level of vitality and activity to that section of Main that hasn't been seen for decades. But it won't be easy.

Lower Main has been one of the hardest nuts to crack in Buffalo's redevelopment, largely because of the size and scale of the buildings that dominate the landscape. The opportunity is enormous, but so is the task at hand, given the money and confidence that are required.

Yet the five-block stretch from Exchange to Court streets is finally getting its due – even before the return of car traffic to that part of the thoroughfare.

From Seneca One tower to the AM&A's department store building, new owners and developers have been tackling some of the city's toughest projects, turning – or at least hoping to turn – vacant office and retail buildings on both sides of Main Street into vibrant new centers of commerce and living.

Seneca One, empty for the last four years, has tenants signed for about half of its office space, while new apartments are ready to be leased once construction work outside wraps up.

Combined with a series of office building conversions on the next block, that could bring hundreds of new residents and more than 1,500 employees to downtown. There is also a new banquet facility, along with plans for more storefronts and restaurants to draw in other patrons.

The city is eager to capitalize on the new opportunities, both by supporting and partnering with the developers to enable the projects, but also – in one case – by reaping the benefits of Seneca One tower owner Douglas Jemal's desire to fund infrastructure improvements such as Cars Sharing Main Street.

That yearslong initiative has brought back car traffic to the 700, 600 and 500 blocks of Main further north, where building owners have invested millions in renovations and facade improvements to capitalize on the new streetscape and the potential for more visitors. City officials and developers are counting on the same thing happening on Lower Main, once financing is secured and work begins in the next few years.

Even so, observers agree that there remains much more to do.

The gaps in development are a drag on efforts to create critical mass along Main Street. The hulking former AM&A's department store remains empty and crumbling, although a promised infusion of new capital could revive long-delayed efforts to turn it into a hotel and restaurant complex.

The Main Place plan and the new capital flowing into the AM&A's project raise hopes that those gaps could start to close.

"We always looked at it as an important development site," Mayor Byron W. Brown said. "We had looked at what Patrick Hotung and his family have been able to do in other parts of the country, and we knew they were capable of doing it, of making a tremendous transformation." 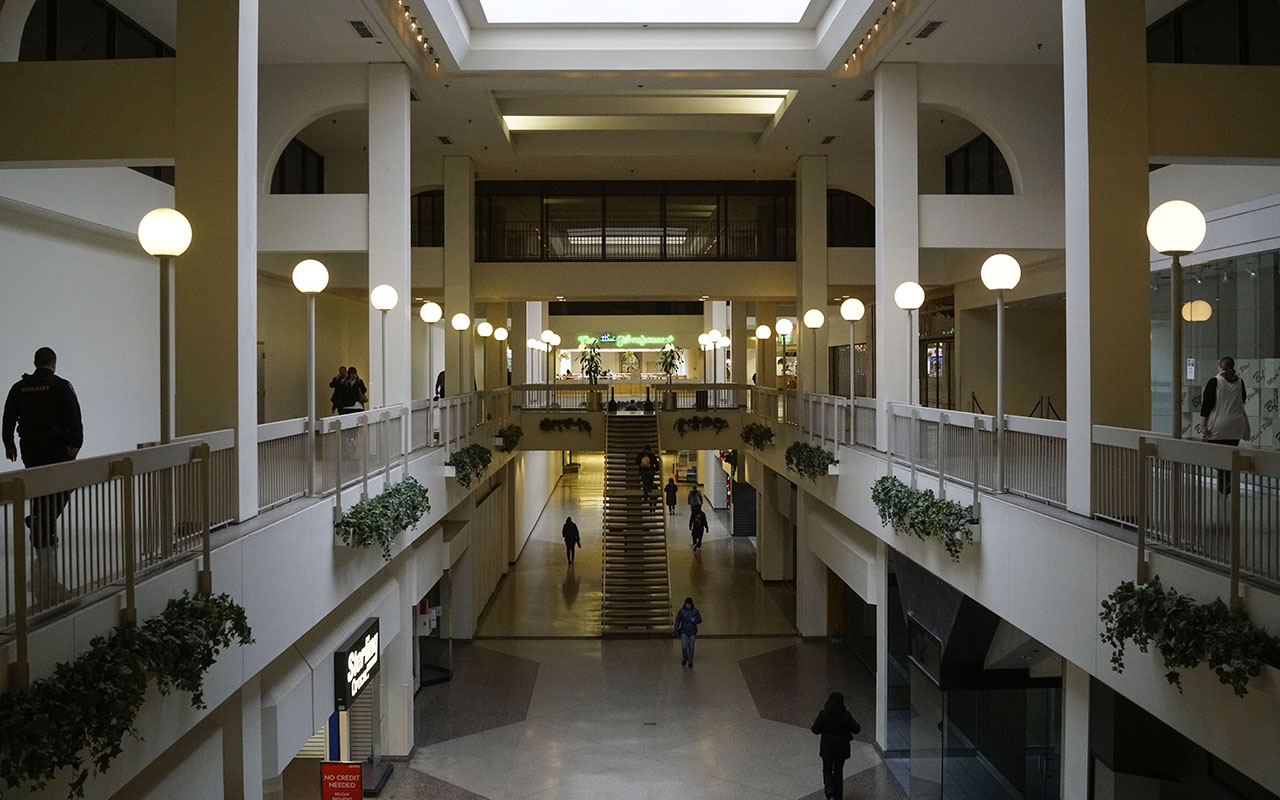 The sprawling retail complex between Main and Pearl streets was supposed to be a retail mecca within downtown Buffalo, but has instead become one of the big question marks amid the redevelopment boom. Much of its space is now occupied by telecommunications firms and computer data centers, aside from the Greenhouse Food Court and a half-dozen retail tenants, such as Sterling Optical, a deep-discount store and Gino & Joe's Pizzeria.

Its owner wants to hit the reset button.

Violet Realty's Main Place Liberty Group – the commercial real estate company owned by Patrick Hotung and tied to one of Hong Kong's most prominent families – is proposing a radical face-lift and remake of the lower levels below the Main Place Tower. 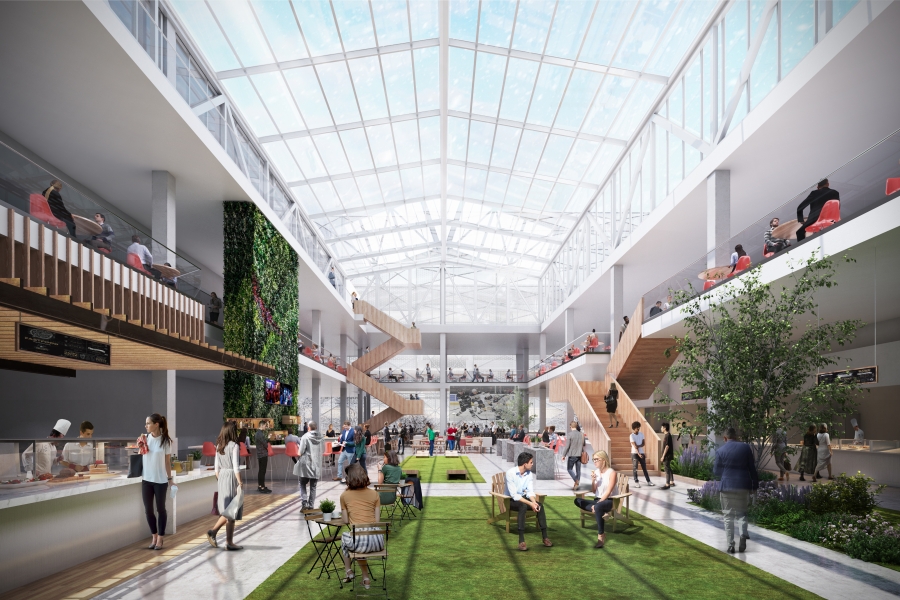 The ambitious project – unveiled as part of Brown's State of the City address last week – is designed to breathe new life into the complex by attracting large-scale business tenants to its three massive floors of retail space.

The idea is to convert the large floor plates – totaling 280,000 square feet – into office space with some retail and other amenities. The project also would give the building's exterior a new look, swapping out darkness for natural light, with an architectural ribbon spanning Main Street and Church Street.

Hotung wants to add skylights and floor-to-ceiling windows along the Main Street side of the building and on the third floor. And he plans to create a large-scale food hall and a rooftop garden and outdoor lounge as key elements of a new package of amenities for building tenants. Hotung believes the "creative, unique offering" could be a tool to attract younger workers to downtown Buffalo.

But first, Hotung needs to land new the major new corporate tenants to fill it up. 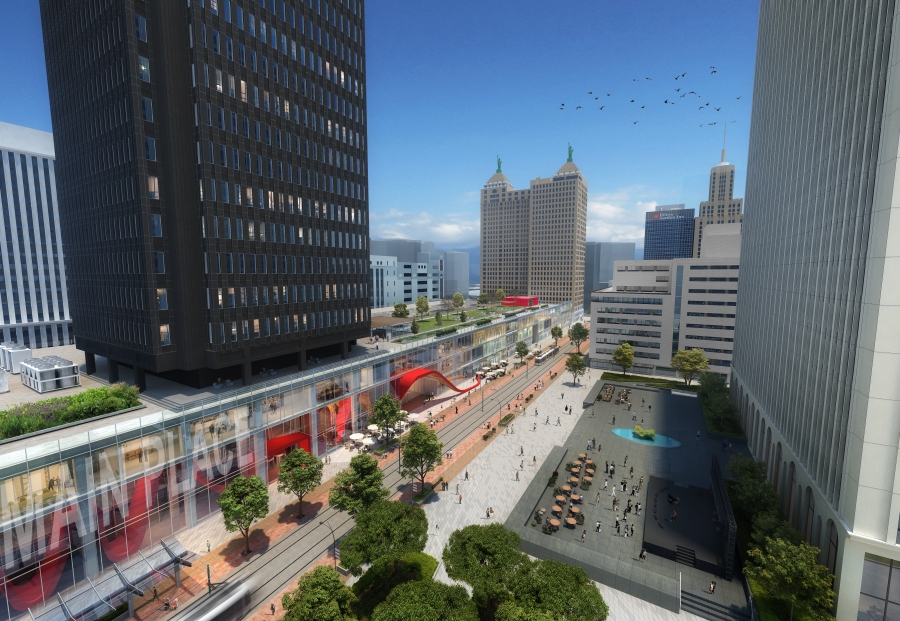 A bird's-eye view of the rendering of the redeveloped Main Place Mall. (Image courtesy of Main Place Liberty Group)

Hotung is betting that he and his family have the experience to make that happen. Besides Buffalo, Hotung also oversees other real estate ventures across the country, including in San Francisco and Chicago.

"We’ve had success attracting new information and technology tenants to our other projects, specifically in San Francisco and Chicago," he said. "We’re tapping into our expertise to take the Main Place Mall – and Buffalo – and put it on the national stage.”

The company did not provide details, but renderings released by Violet Realty suggest that a whole new look could be coming to the mall, with vivid colors, new gathering areas and wide-open office floorplates.

There's also a new glass "skin" and design on both the mall and the 1,210-space Fernbach Ramp across Pearl Street, which Violet and Main Place Liberty Group have tentatively agreed to buy from the city for nearly $20 million. The city said it plans to use those funds to advance efforts to "alleviate transportation burdens on commuters" into downtown Buffalo.

“We know the community, elected officials and local businesses will have a lot of questions at this point," Hotung said. "Although we don’t have all the answers, what we can say is that our team has invested time and energy into this project because we believe a development like this can happen in Buffalo.” 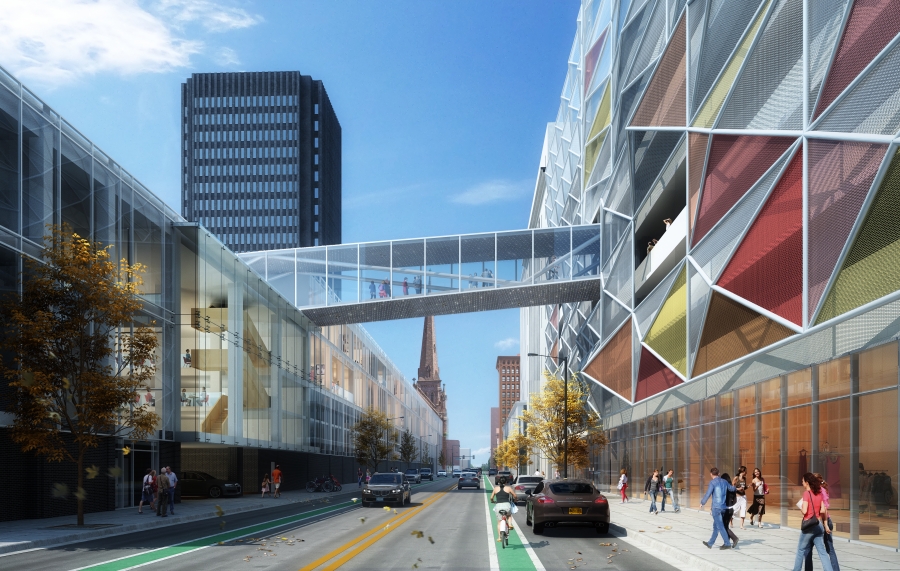 A rendering of the redone facade of both Main Place Mall and the Fernbach Ramp across Pearl Street. (Image courtesy of Main Place Liberty Group)

Meanwhile, things already are happening on the rest of lower Main.

At the southern end of the stretch, Washington developer Douglas Jemal is spending $120 million to bring Seneca One back to life, with 115 apartments, office space, storefronts and restaurants. The project is still underway, but the tower is beginning to fill up. 43North and its portfolio companies have moved into the formerly vacant 38-story tower, with M&T Bank Corp. to follow as the anchor tenant, occupying the two large floors below the plaza level along the street, as well as 11 floors of the tower.

Just to the north, banker-turned-developer Paul Kolkmeyer led an investor group in buying and renovating three adjacent buildings at the corner of Main and Seneca streets. The Marin, Roblin and Glenny buildings – former office buildings that weren't fully occupied – are now a mix of apartments and offices, with a rooftop terrace and a banquet and events center. Along with a parking lot, they occupy an entire block.

Across the street, next to Merchants Insurance's headquarters, public relations and marketing firm Crowley Webb bought the Sweeney Building and has renovated some of the floors, with more upgrades planned.

And after years of delays, the Chinese investment group that owns the AM&A's building said it is getting ready to start work on its $70 million overhaul of the derelict former department store into a 300-room Wyndham Buffalo Hotel and restaurant.

Not all of the work is recent, of course. Developer Carl Paladino bought the Ellicott Square Building in the 1980s, launching his company and successful real estate career through the renovation of the 10-story Italian Renaissance-style commercial office building that was built in 1896. Paladino followed up with the Swan Tower across the street – originally erected in 1909 for Fidelity Trust Bank – at 290 Main.

The big gap? The Main Place Mall. And after decades of decline, that, too, may change.