Fattey Beer Co.'s growth has been explosive, thanks to the allure of the craft beer store-meets-taproom concept and throngs of craft beer aficionados. Now, owner Nik Fattey has chosen his third location in which to expand: Orchard Park.

The next Fattey location is expected to open at 4226 N. Buffalo St. in spring. At 1,900 square feet, the newest location – two doors down from thriving Kaylena Marie's Bakery – will be the biggest of the trio of stores.

The Hamburg location of Fattey Beer Co. has laid the business' foundation since 2017. The downtown location, which opened in 2019 on Genesee Street, proved a hybrid beer store/taproom could thrive in the city, tapping 500 kegs in eight months and nearly filling its 350-person mug club.

In Orchard Park, indoor and outdoor seating, separated by a garage door, will capitalize on a walkable stretch of the village. Dogs are welcome, too, with a weekly Yappy Hour scheduled.

Fattey, who will work with partners Chris DiCesare, Matt English and R.J. Friedman at the new location, will boast 500 beers at all times, including the beer library, a big beer fridge and a cooler dedicated to $3 beers. It also will boast 16 taps, compared to 12 downtown.

Fattey's former travels as a hockey scout exposed him to breweries and craft beers around the country, which fueled his interest in finding excellent craft beers from around the world. 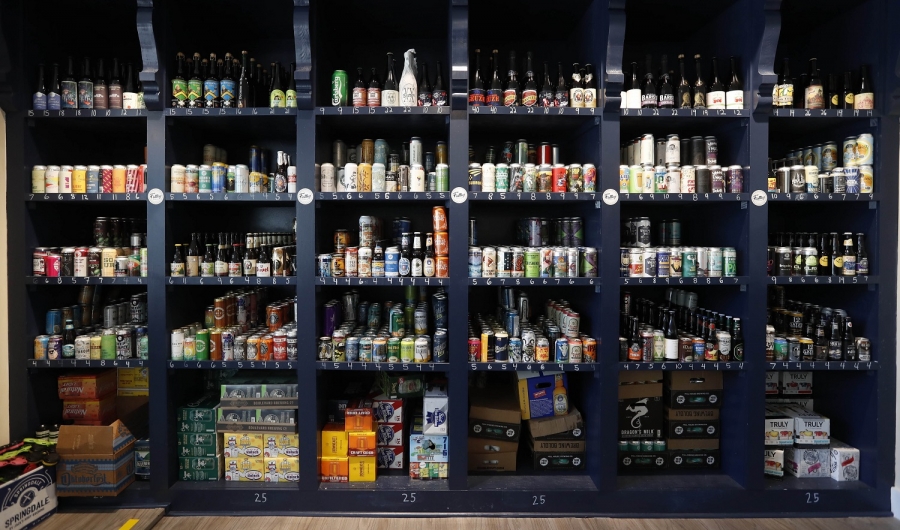 Fattey has more than 500 cans and bottles available for purchase at each location. (Sharon Cantillon/News file photo)

En vogue breweries such as Other Half, SingleCut and Fat Head's are on Fattey's rapidly rotating draft lists, which differ between locations and are largely driven by customer interest. For example, Fool's Gold, an imperial peanut butter hefeweizen by Rusty Rail Brewing in Pennsylvania, has taken the Genesee Street shop by storm. That location also has more trendy New England IPAs (four) than Hamburg (two).

"If I've never heard of a [beer], that means I want it," said Fattey, who already is pursuing further growth beyond Orchard Park.

A more elaborate food menu is in the works for Orchard Park, based on pizza sourced from another local company, plus pizza logs and housemade ice cream crafted in a small cooking area. There will be free popcorn, and customers will be allowed to bring their own food in from outside the shop. A private area with a 14-foot-long community table will be available for gatherings like office parties and fantasy sports drafts.

The space was previously Don Tequila, a Mexican restaurant that closed after a fire in late 2012. Developer Jay Macaluso rehabbed the building, which also includes 12 apartment units, after the incident.

*Interesting note: The Fattey Beer Co. at 5 Genesee St. has become the Buffalo home for fans of Chelsea FC, a professional soccer team that competes in the English Premier League. Roughly 10 to 25 fans gather on match days, and the bar opens early to accommodate.