A year ago, Sweeney wouldn’t have been able to celebrate in such fashion.

Sweeney played her entire junior season with a labral tear in her left shoulder. The 5-foot-7 guard was still able to average 19.2 points, 7.0 rebounds, 4.6 assists and 4.0 steals to earn NFL Player of the Year and fourth-team All-Western New York accolades while leading the Vikings to their first league title in eight years and the Section VI Class A-1 final.

The injury, a tear to the cartilage at the rim of the shoulder socket that helps keep the ball of the joint in place, arose during the previous lacrosse season and caused increasing pain while Sweeney played soccer and basketball.

“I kept playing through it,” Sweeney said. “They told me it was just a matter of pain tolerance, and I wasn’t going to let that stop me. There were times I’d come in the game and wouldn’t want to extend my elbow down and put weight on my shoulder. I definitely couldn’t use my left hand as much as I wanted to. But I didn’t want the other teams to know, so I would force myself to use it a little.”

A second-team All-WNY lacrosse selection as a sophomore, Sweeney gave up her three-sport status last spring to devote more time to rehabilitating the shoulder. She opted against having surgery, however, in order to play for her AAU basketball team, the Buffalo Titans, which won a U.S. Junior National 17U championship.

“I went to PT three times a week and would come to school every day to work with my trainer,” Sweeney said. “I was very diligent in doing the best I could to have the quickest healing time.

“Playing AAU slowed down the healing a little bit. There were nights I would get home from tournaments at 10, shower, do my exercises, and then wake up in the morning and do them again. But I’m glad I played AAU because it was an important summer for getting college looks.”

Sweeney received a number of Division II scholarship offers before committing to Cedarville University in Ohio.

She risked re-injury by diving to make saves for Grand Island’s soccer team in the fall, but the second-team All-WNY goalkeeper avoided a setback and helped the Vikings defend their sectional title.

Healthy and confident in the shoulder again, Sweeney set her sights on contending for more championships on the basketball court.

“Knowing we won the league championship last year, my mentality was that we have to work even harder to defend it,” Sweeney said. “We are going step by step. First with the league, now into sectionals. I think we’ve put ourselves in great position.”

Orchestrating the offense and anchoring the defense, Sweeney has averaged 22.9 points, 7.0 rebounds, 5.7 assists and a section-best 5.9 steals in leading Grand Island to the semifinals of the ultra-competitive Class A-2 bracket.

Tuesday night’s playoff game at Clarence will be the fourth meeting this season between Grand Island, ranked eighth among Western New York large schools, and honorable mention Lewiston-Porter. The Vikings have won the past two meetings, including the Frontier division tiebreaker contest. 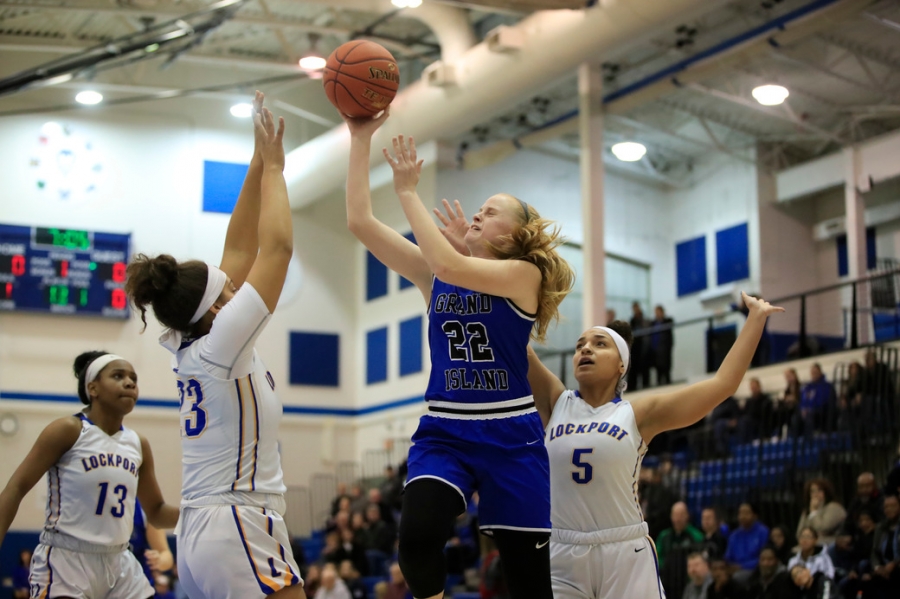 “She has evolved every single year and become such a versatile player, it’s special,” Grand Island coach Kristin Wegrzyn said. “She really struggled with the injury last year. Not a lot of people could see it because she had a tremendous year offensively, but her defense was lacking. This year, we’ve made her the centerpiece of our defense. From being a soccer goalkeeper, she is so good at attacking angles and playing the passing lanes. And on offense, she can create for herself and when teams put two people on her, she is so good at corralling the defense and finding her teammates.”

Opponents respect Sweeney’s on-court demeanor as much as her skill. Lockport coach Joe Catalano recalled seeing Sweeney play junior varsity while in middle school and telling his sister, “that kid is going to be special.”

“The poise and maturity she played with was unbelievable,” Catalano said. “One thing that stands out from a mile away about Lydia is how much her teammates love her. That is a true sign of a leader.”

“She can dominate a game in every aspect,” he added. “She doesn’t need to score to be an impact player. She trusts her teammates and is always toward the top of Western New York in assists. She is very fierce on the defensive end, too, and doesn’t take a play off.”

Catalano called it bittersweet to have lost against Sweeney in the NFL title game for the second year in a row.

“I was so happy to never have to game-plan against her,” he said, “yet I was sad because I loved the friendly rivalry we have developed.”

Catalano could find himself coaching against Sweeney in the future. Her older brother, Jake, was a University at Buffalo student manager and followed Bobby Hurley to Arizona State, where he is now an assistant director of basketball operations. Lydia said she chose Cedarville for its physical education program, with an eye toward the sideline.

“After college, I wouldn’t be shocked if I went straight into coaching,” Sweeney said. “I love the game so much and the way it works.”

Sweeney plans to coach a Buffalo Titans squad during the spring AAU season. She is undecided about returning to lacrosse.

If her high school career ends this month, Wegrzyn, a Viking herself, said Sweeney “is one of the best three-sport athletes that have come through Grand Island in a long time, if not ever,” with the aptitude to be a successful coach.

“She is going to be a coach that kids want to play hard for,” Wegrzyn said. “She knows the X's and O's and is going to know how to push the right buttons. Players will know she came from a place of working hard to get where she is and she is going to be a great role model for athletes.”