A milestone, a championship and an MVP trophy.

Coach Bob Rosen had a day to remember at KeyBank Center on Sunday. He wasn’t the only one who secured life memories on the day the Western New York Varsity Hockey Federation crowned its three boys’ playoff champions.

The Spartans not only added to their championship collection but also secured the 500th career win for Rosen – the only coach in the history of the 30-year-old program.

Jacob Okulewicz scored twice while fellow senior Mason Meggo’s goal 41 seconds into the game sparked a three-goal-first-period blitz by the Spartans (14-8-1), who defeated Orchard Park, 5-1, in the Section VI Division I final.

Rosen has led North to each of those crowns as well as five state championships. The winningest active coach in the state has achieved a lot during a distinguished coaching career, but even he experienced a first Sunday when selected as game MVP – an honor usually reserved for players.

Though Rosen said he would’ve preferred sharing the honor with Okulewicz, that doesn’t take away from the enormity of his feat. Rosen is just the fourth high school coach in state history to reach the 500-win mark. He’s 53 wins away from matching retired Salmon River coach Bill Plante for No. 1 in state history.

“I’ve had a lot of great teams and a lot of great kids,” Rosen said. “Not all the teams win, but some of the great teams are the makeup of the kids and being around them, and this is one of those groups that you’re just really happy to be around day in and day out. I’m happy for them and that it could be my 500th win today.”

In the Division II final, Starpoint rallied for a 3-1 win over Williamsville South as the third-year varsity program captured its first Section VI championship.

St. Joe’s added to its title collection as the Marauders captured their seventh Niagara Cup in nine years and 14th Fed playoff title by blanking St. Mary’s 4-0. St. Joe’s scored thrice in a span of just over 2 minutes early in the first period and cruised from there. Goaltender Joseph Fronczak made 29 saves en route to being selected game MVP.

That includes North, which won the state title during its last tournament appearance in 2017.

The Spartans (14-8-1) wasted little time getting the jump on OP, which entered the game as the defending sectional champion. Meggo picked off a cross-ice pass in the Quakers’ zone, near the top of the left circle and quickly zipped a shot past Ryan Albert to make it 1-0 North.

“We went over that on film and one went right on Meggo’s stick and he walked in and buried it which was sweet,” Rosen said. “When you prepare and a team sees something positive come out of what you just went over for the last three days, well you get immediate satisfaction and gratification that it’s done and it works.”

The lead grew when Okulewicz scored on a turnaround slapper with 7:09 left in the first. Ward fired in a rebound to make it 3-0 a few minutes later. OP had a great chance late in the period to get on the board and perhaps get some momentum heading into the second, but Braun made consecutive saves from point-blank range to deny the Quakers.

Orchard Park’s Owen Hughes scored on the power play to make 3-1 with 9:59 left. Plenty of time for more goals. It wound up being the Spartans though who kept finding the back of the net. Okulewicz quelled OP’s comeback bid 81 seconds later by splitting the defense on a rush and scoring top shelf. Scott’s goal provided the capper on a day when the stars aligned so Rosen could experience a milestone and championship moment at once.

St. Joe’s sang “When The Saints Go Marching In” for its fans while celebrating another Niagara Cup. That’s about as crazy as the Marauders’ celebration got as Sunday’s win gave them the opportunity to play for the title they really want – the New York State Catholic High Schools Athletic Association crown Saturday on Coney Island against a still-to-be-determined team.

St. Joe’s, the reigning state champion, had a phenomenal practice session Saturday, according to coach Richard Crozier. That carried over into the Sunday. The Marauders (20-2-3) had a 3-0 lead before the game was even 5 minutes old on goals by Sean Deakin, Tino Turello and Frankie Attea. St. Mary’s did put some rubber on Fronczak but couldn’t solve the senior, who stopped two breakaways.

“We had a practice where we could not miss,” Crozier said. “I stopped it 50 minutes into it. We had a 90-minute practice scheduled. I don’t remember ever doing that. Everything was going so well.”

“It’s a great feeling,” Deakin said. “I mean we’ve worked so hard this whole year. ... To be able to go to New York City now and have an opportunity to compete for a state championship is amazing.”

Starpoint proved that the old hockey adage of good things tend to happen when a player crashes is true once again. The Spartans (20-1-2-1) scored twice off rebounds, including Blake Dewey’s game-winning goal with 6:18 left as the No. 2 seed avenged a regular-season loss to top-seeded Williamsville South in the Division II final.

Dewey’s initial shot from close range was blocked by a Billies defender, but he quickly corralled the rebound and fired it past a helpless Jayce Faso. Joe LoBrutto added an insurance goal for second-seeded Starpoint with 2:57 left, as he used a defenseman as a screen and snuck a hard, low wrist shot past Faso.

Starpoint scored the last three goals as it tied the game late in the second period when Justin Bull won a faceoff, drove to the net and deposited the rebound of a hard shot from the point.

Williamsville South (18-4-1), one of the Original Eight founding members of the Federation, fell to 0-2 all-time in playoff championship games.

Starpoint, which has won 20 games since it lost to South, faces a still-to-be-determined opponent Saturday at the Buffalo State Ice Arena.

“It’s the best feeling there is,” Spartans coach Clayton Wilson said. “The boys have worked so hard. I’ve added extra practices. They’ve never missed a practice. These kids just want to be at the rink and it just makes it a please to be a coach.”

“It’s a great accomplishment and I’ll never forget about this,” Dewey said. “This is a memory that will last a lifetime.” 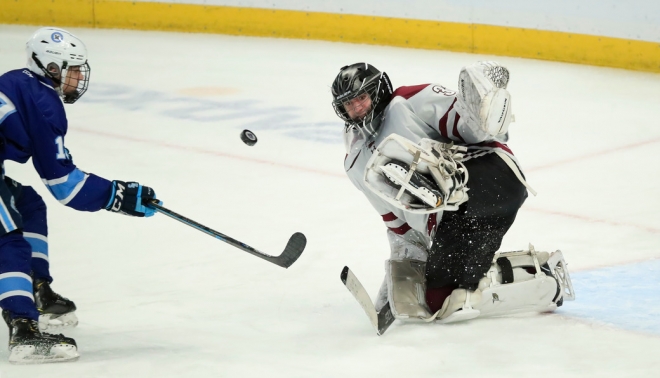