A final design for the Buffalo Sabres' commemorative 50th anniversary jersey arrived in late fall 2018 after hundreds of exchanges across several months between a small committee at Pegula Sports and Entertainment and Adidas.

The white alternate uniform included a unique take on the Sabres' traditional logo. The design team at Adidas used golden stitching on the crest to accentuate the hair flowing down the back of the bison and it was positioned above two golden sabre swords on top of a gold-outlined blue emblem.

Five golden stripes, each representing a decade, were placed on the arms and waist.

Hockey operations, including General Manager Jason Botterill, signed off on the concept and video testing was completed to ensure the nameplate was visible.

Terry Pegula, whose childhood fandom inspired him to purchase the Sabres and Bills, wanted one more change before he would provide a stamp of approval.

"I think we need a little more blue," Ron Raccuia, PSE executive vice president, recalled Pegula saying during a meeting in late fall 2018. "The next thing you know, we had a jersey."

Pegula suggested the middle stripe on the arms and waist be changed to navy, the final adjustment to a jersey that became the symbol of the Sabres' Golden Season.

All involved in the creative process worked backward to arrive at the final product.

PSE walked The Buffalo News through the planning, design, execution and unveiling of the jersey.

Before planning for the 50th jersey began, Terry and Kim Pegula decided to change the Sabres' primary colors back to royal blue and gold for the 2020-21 season.

During the summer of 2018, the committee at PSE – Raccuia; Frank Cravotta, executive vice president of creative services; and John Durbin, senior vice president of marketing – began planning how they could separate the alternate anniversary jersey with the new primary uniforms.

"It had to be done in conjunction to make it consistent and concise," Cravotta said. "It was a plan of transition, so you had to know what Step 2 was in order to do Step 1."

PSE received the first batch of renderings for the 50th jersey after it provided Adidas with a list of three basic elements.

1. Gold must be a primary color. PSE studied concepts used by other teams for their respective 50th seasons and noticed how the Philadelphia Flyers used gold trim around their numbers when they celebrated their anniversary in 2016-17.

PSE also thought that playing up the gold would allow the jersey to stand alone from the primary navy uniforms this season and the switch to retro for 2020-21. The committee examined versions of gold, including those used by the Vegas Golden Knights and the University of Notre Dame.

Adidas declined to make any of its designers available for comment.

"Gold isn't even one of the Flyers' colors, so what can we do?" Durbin said. "How can we push that even further? We wanted to make that really special and make it pop."

2. Terry Pegula prefers simplicity, so the design team wanted clean lines and requested five stripes after it used four on the 40th anniversary alternate jersey in 2010-11. A commemorative patch wasn't placed on the jersey, either.

Instead of including an ode to the franchise's past, each of the four logos previously used by the Sabres – the original bison, the goat head, two crossing swords and the slug – were stitched inside the back collar.

3. A jersey that resonates. Pegula and the committee wanted a uniform fit for the milestone season, something current and former players would wear with pride. Adidas executed that vision by including the golden-stitched bison in initial renderings sent to PSE.

"When we first saw it, we went, 'Wow, people are going to love this,' " Cravotta said of the bison.

"We were thinking about how can you make it not look like your current jersey," Raccuia said. "Then in order for it to not look like a retro jersey, we said let's have solid white on top without the blue shoulders." 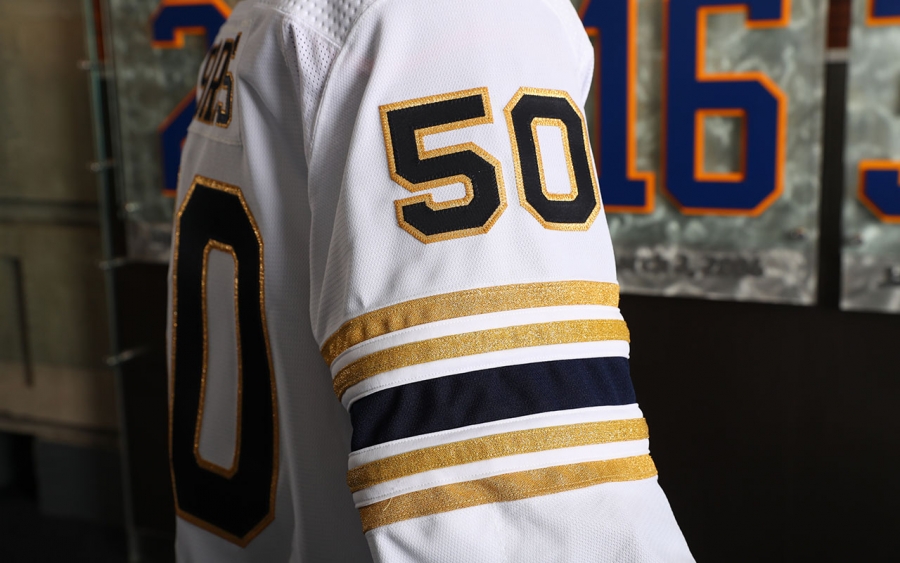 The collaboration between PSE and Adidas produced what was thought to be the final product: a white jersey with five gold stripes on the arms and waist, gold-outlined blue numbers and the golden logos on top of the blue crest.

Adidas sent the Sabres one prototype uniform with matching socks for video testing. A PSE employee wearing the jersey and corresponding equipment skated on the ice in KeyBank Center while people watched from the 300 level to see if the numbers and nameplate were visible.

"You need to see what that name looks like on the jersey," Cravotta said. "Obviously you want to see how that shiny gold bounces and pops. Really, what happens is in a perfect world they send you the uniform, you do your on-ice testing and everything is ready. We added another step to that."

The jersey was then completed when Pegula suggested the blue stripe shortly before the deadline. Cravotta altered a photo from the on-ice video testing to include the blue stripe and sent the idea to Adidas, which began the process of manufacturing the jersey. The design was also sent to the NHL for approval.

The licensing process began and vendors were notified, and Durbin was able to complete a marketing plan that was built around the jersey. The next step was equipment.

Initial renderings by PSE included all-white gloves, similar to those worn by the Golden Knights. However, Sabres equipment manager Dave Williams had concerns about how dirty those would become throughout a game and suggested a navy cuff be added to complement the navy stripe.

Williams searched online to see different versions of white gloves, including Vegas' and Boston University's, and suggested a few changes. He also had his son use one of the samples on the ice to see how much dirt could show on all-white gloves during a practice or game.

"I reached out to Vegas and had some of their gloves sent in as a sample, so we could compare it to the jersey we made," Williams said. "I suggested we add a blue cuff roll to break up the white a little bit. From there, the only thing I did after that was add the (three-dimensional) helmet sticker. I was able to use artwork to show the PSE people what I would like to do and they said it made sense." 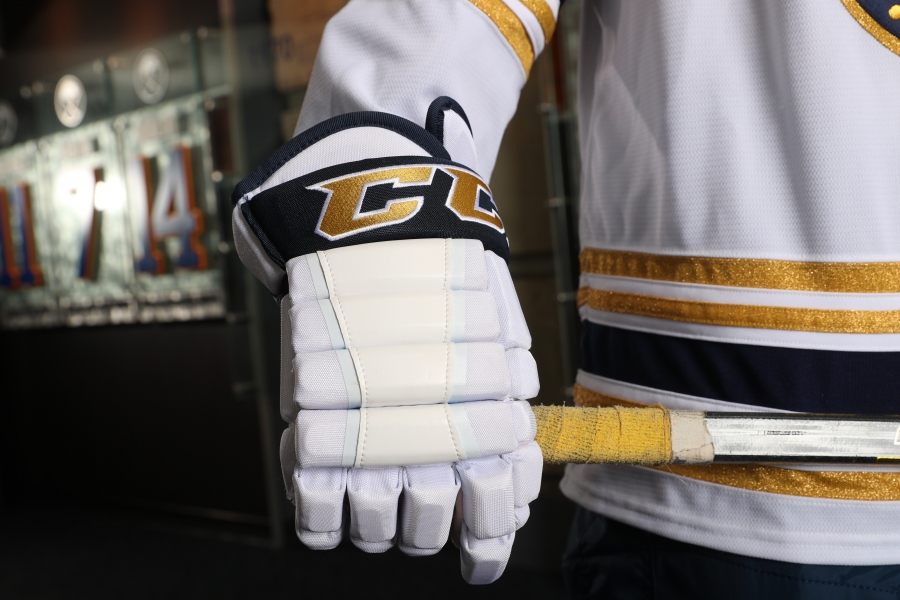 The team is wearing white gloves with the 50th anniversary jerseys. (Photo courtesy of the Buffalo Sabres)

When the gloves were approved during the 2018-19 season, Williams ordered samples from every major equipment company to make sure the gold and navy matched. An equipment order must be made six to eight months before the season.

The Sabres were scheduled to wear the 50th jersey during 13 home games, including the home opener and theme nights. Kevyn Adams, the Sabres' senior vice president of business administration, told The News in a recent interview that the team underestimated customer demand, as each shipment has sold out since the jersey was made available for purchase Sept. 17. Approximately 7,000 jerseys have been sold.

Additionally, a group of designers at PSE examined secondary logos used by other teams in previous milestone seasons and created a commemorative patch that was placed on the shoulders of the Sabres' regular home and away jerseys.

The unveiling was as important as the design itself. Since fans expected a retro look for the 50th, specifically one incorporating the franchise's original color scheme, the Sabres decided to first announce the switch to royal blue for 2020-21.

On Aug. 16, 2019, one day after the primary color change was announced, the team revealed the 50th jersey on social media with a video in which a PSE employee modeled the uniform while standing amid a plume of smoke.

"We wanted our fans to embrace it for what it is and what it's intended to be, which they did," Durbin said. "That unveiling could not have gone better, in my mind."

"When we were finally able to tell the story of us changing colors the year after, it took the air out of the problem," Raccuia said. "The 50th then was able to stand on its own as this one-of-a-kind jersey. ... It showed fans that we'll have a great 50th and you'll probably get what you want sooner rather than later."