The snow had not quite arrived Thursday as a pewter dusk slipped into night on Sycamore Street. Jessie Fisher and Barbara Campagna ignored a cold rain outside an old brick building near Michigan Avenue, greeting others at the entrance to a tattered landmark that for years had seemed abandoned to commuters driving past.

For the first time since the days when, well, many upstanding 19th century patrons found their way to that front door,  guests for an evening tour were asked to wait for just a moment in Eliza Quirk’s sitting room. In the shadows, amid peeling wallpaper and cracked plaster, it was not hard to imagine the place as Eliza saw it in 1850.

“I think we all have grown really fond of her,” said Christiana Limniatis, director of preservation services for Preservation Buffalo Niagara, which is playing a key role in saving one of the oldest surviving buildings in downtown Buffalo.

As for the enterprise it was built to host? Well, it was a longtime “bawdy house,” as journalists of the time sometimes described it when Eliza was arrested, which was not infrequently.

She was a sex worker. That started off as a surprise to researchers at Preservation Buffalo Niagara, whose initial focus was simply saving a landmark.

The previous owner had planned to demolish it, before developer Rocco Termini bought the structure and an adjoining building – that one lost to a 2018 fire – and handed over the property to PBN, which Fisher serves as executive director.

That rescue happens amid a moment of larger civic alarm for Fisher and her staff. Citing the threat of a lawsuit by developer Nick Sinatra, city officials reversed themselves Thursday and allowed the demolition of a 113-year-old house a few miles away, in the Elmwood Village — less than a day after the Buffalo Preservation Board recommended granting that house landmark status. 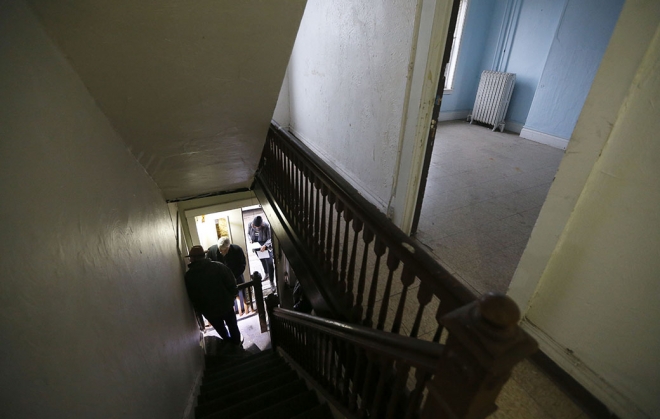 To Fisher, that sanctioned razing without Common Council review was a jarring step backward.

"It has deep implications for how we do our work in the future," she said. "That's why that case is so upsetting. We shouldn't have to go through this every single time in a city that purports to value preservation as much as this one does."

Fisher sees any loss of muscle in the established process as a threat to the mission of saving such buildings as the one linked to Eliza: Vibrant cities must be responsive – in both the decisions they make and the buildings they respect – to communities beyond traditional enclaves of power.

The simple, vine-covered structure on Sycamore, for instance, was built in 1848 and endures mainly because of its brick walls. As Campagna pointed out, it was the discovery of the Irish-born Eliza and her story that transformed the way its new owners view its purpose. 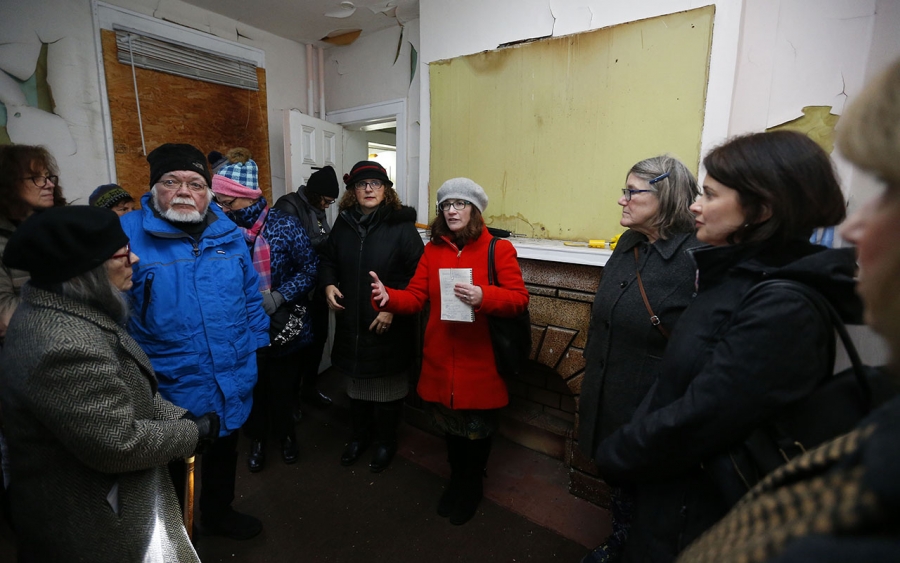 “She was a famous courtesan, a high-end sex worker,” said Campagna, an architect who serves as a consultant on the project. Eliza's career led to a slogan for the effort that may be unique, at least officially, within the annals of 21st century downtown development in Buffalo:

“The little brothel that could.”

Beyond all kidding, Fisher and her staff see it as a monument to realities of the world as they were, and remain, for too many who suffer.

Originally constructed as two separate buildings, then linked at some point in the 1880s, the structure retains a floor plan similar to the days when Eliza was alive. For the most part, as the property passed from owner to owner, its central function still offered rudimentary rooms for rent until it shut down for good about five years ago.

Within a neighborhood deeply intertwined with the city's African-American heritage, the post-brothel boarding house later hosted such businesses as the occasional candy store or cigar shop. Limniatis, during a lecture after the tour at the Big Ditch Brewing Co., said 72 Sycamore also held a tavern called the “The Surprise Hotel,” a name she believes may have been linked to its traditional enterprise.

Over the next two years, Preservation Buffalo Niagara intends to raise about $2.1 million for the restoration "in a patchwork of grants and funding sources" within the Michigan Sycamore Historic District. The structure would be transformed into three units of affordable housing, offices for the nonprofit Heart of the City Neighborhoods Inc., and a workshop and meeting space for PBN. 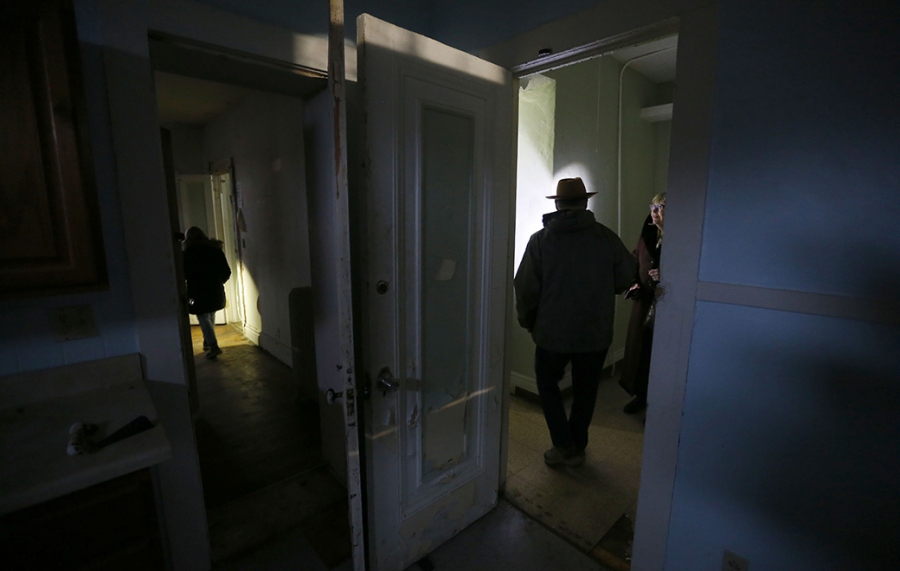 A tour Wednesday of 72 Sycamore St., near Michigan Avenue. The historic brick building, once a brothel, is finally on the brink of being renovated. (Mark Mulville/Buffalo News)

Staff members hope that restoration might inspire a similar revival for a neighboring 19th century commercial building, also threatened with demolition. Philosophically, they see Eliza's surprising life as a reminder of the purpose behind what they do.

"We really strongly believe that preservation should tell the full story of a community as it is right now," Fisher said. "If you read the cultural history of our city through what we've preserved, you're usually looking at a city built exclusively by and for wealthy white men. Certainly that’s a big part of our story, but there's a lot more, and we want to make sure we're finding those stories and sharing them with the public."

The larger tale of any community, she said, is told by the diligence, passion and trials of countless working people who sustain it.

Even by those standards, Eliza was unusual. 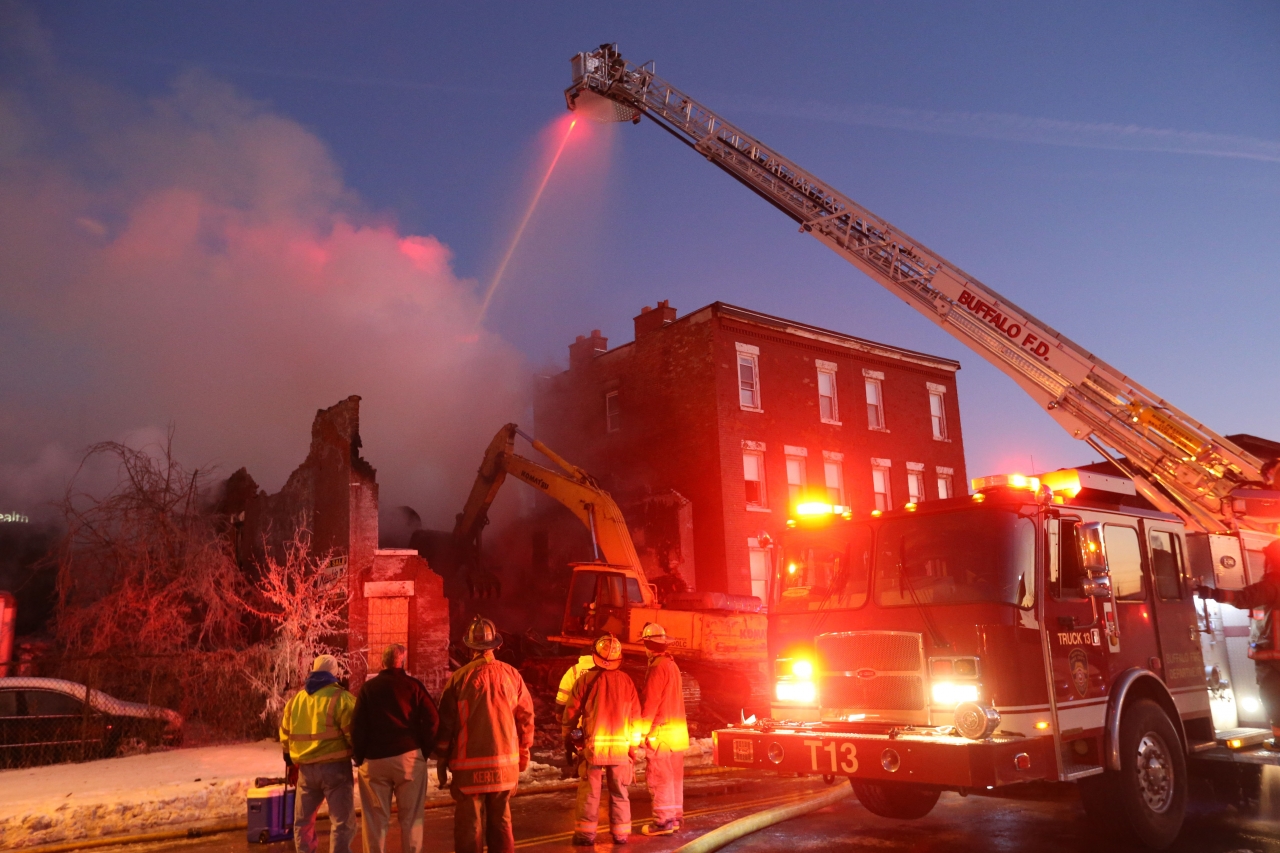 Fire trucks spray water as an excavator knocks down the remnants of a brick building during a fire two years ago that claimed a structure next to 72 Sycamore. (Derek Gee/News file photo)

Records show she was born in Ireland around 1812, before leaving at some point for New York City. She arrived in Buffalo as a young woman, possibly with an influx of sex workers responding to the legion of waterfront laborers drawn to the spot where the Erie Canal met Lake Erie.

While an obituary described Eliza as both "generous" and one of the the nation's "most notorious courtesans,” Fisher, Campagna and Limniatis speak of her with a little awe. Records show she originally lived in a red light district near the canal, a district where sex workers – women with little protection under the law – were essentially confined and always subject to violence and disease.

Eliza somehow broke out. In 1848, she put up two buildings on Sycamore whose value was estimated to be $10,000 by the mid-1850s. Going by an inflation calculator, that would be the equivalent of almost $300,000 today. Old newspaper clippings show that Eliza, arrested occasionally on charges related to her “house of ill-favor,” ponied up for bails as high as $1,000.

Campagna and Limniatis said Eliza's clientele was probably wealthier than the customers who paid for sex at the waterfront. In other words, Eliza – operating within a culture of pain, abuse and disease that destroyed the lives of all too many women – did about as much as possible to make that harsh business work in her favor until she died at home, in 1868.

With grudging admiration, that same obituary described her as leading "a bad, bold life." Burial was at the United German & French Cemetery in Cheektowaga, where the Preservation Buffalo Niagara staff wants to someday have a picnic in her honor, near an impressive tombstone of enough scale to lead to one conclusion.

"She elevated herself," Limniatis said, despite all the odds against it.

To Limniatis, Eliza's choices are a reflection of the hard and limited options available to a single, impoverished immigrant woman in the mid-19th century – and her success demands a kind of historical respect. Indeed, once the building is restored and light again pours through the windows, staff members hope it serves as a statement of purpose.

In all the struggle and shrewd resilience, they see a Buffalo we should not overlook.