Golisano's $20 million investment last fall was another step in the evolution of PostProcess, which has ambitious growth plans but is pursuing them methodically. The company, based in the Tri-Main Center, has 62 employees, 44 of whom are in Buffalo.

With startups gaining more attention in Buffalo, PostProcess is determined to make a breakthrough. Now it's up to the company to make the most of its technology, leadership team, capital, sales skills and advice from seasoned investors.

"As far as the growth opportunities are concerned for PostProcess, I think they're enormous, if you look at the market," said Charles Lannon, an investor in the business. "It's a disruptive technology, I'll grant you that. But it's one that's gaining more and more traction every day."

Specifically, PostProcess focuses on what to do with 3D printed parts after they are made, either as prototypes or production units. It's referred to as the "third phase" of 3D printing, after the design and printing phases. 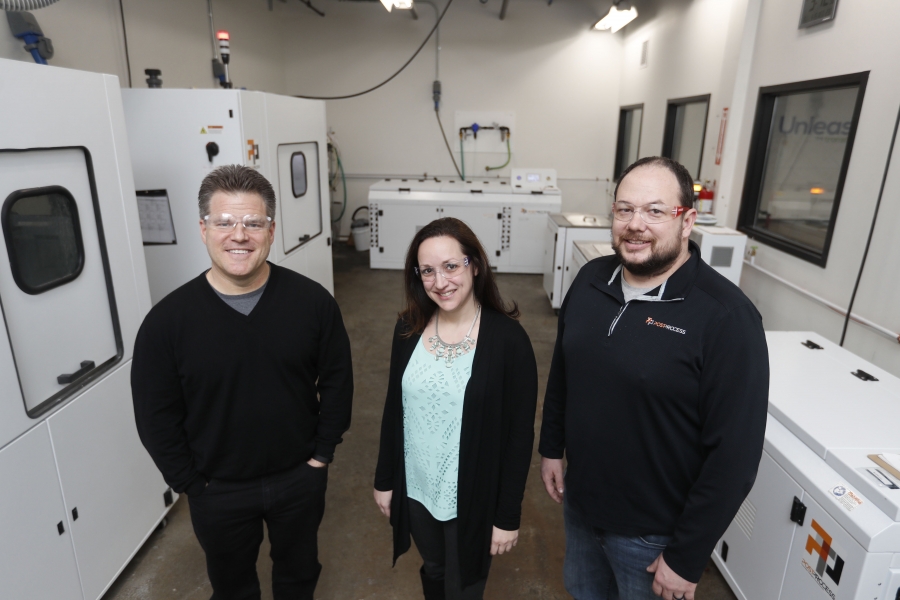 Typically, freshly printed parts have "supports," excess material that needs to be removed. Removing supports can be done manually, which is time consuming and delicate work.

A printed part – say, a medical model of larynx – can get damaged by someone using tools to remove the supports. Another method to remove supports is to soak a part in what's called a "dunk tank," but that might warp the part.

Daniel Hutchinson, who founded PostProcess in 2014, developed a different solution using automation. His approach is a combination of hardware – the machines that perform the work on the printed parts – the software that runs the machines, and chemistry, in the form of the substances used inside the machines.

"Integrating all three is really tricky," said Jeff Mize, the CEO. "We think that's going to allow us to extend our leadership position in the market." Along with removing supports, PostProcess technology can provide surface finishing for the parts, something customers increasingly want, Mize said.

PostProcess is counting on the 3D printing market to explode over the next few years. Experts who track the industry believe that will happen.

The Wohlers Report forecasts worldwide revenues in the additive manufacturing industry – another term for 3D printing – will reach $28 billion in 2023. Mize said the post-print market could account for $7.3 billion of the $28 billion total. If just a quarter of those customers choose an automated solution for their post-printing work – like the kind PostProcess provides – that presents a $1.8 billion market the company could tap into, he said.

Mize was introduced to PostProcess as a possible investment opportunity. But after talking with Hutchinson, Mize – who has worked in the startup world – was intrigued and saw an opportunity to join the company and scale it up. He was named CEO just over four years ago, and Hutchinson moved into the chief technology officer's role. 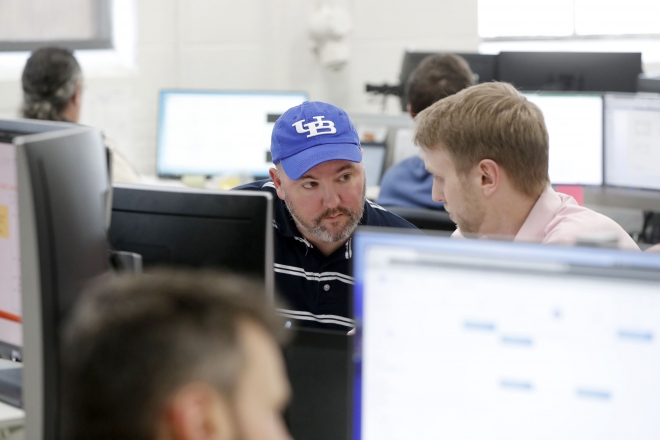 Investors have supplied financial fuel for PostProcess's growth. "We set out to raise $800,000 in the first round and we ended up bringing in $4 million, so it was tremendously oversubscribed," Mize said. "We had a lot more that wanted to come in."

A second round of fundraising, known as Series A, raised $14.2 million, far exceeding the company's $3 million goal. Mize said Lannon was a key investor who also helped bring in other local investors. "We wanted to make sure we made this as much of a Buffalo story as possible," Mize said.

PostProcess also felt Grand Oaks "would be looking more for a long-term perspective and we wouldn't be one company in a big portfolio, where we might get pushed to do something we didn't want to do just to make the overall portfolio look good." Plus, the investment firm is based nearby, in the Rochester area.

For all the investment that PostProcess has attracted, Mize said some private equity firms and venture capitalists had suggested the company aim even higher, to grow more rapidly.

"But our goal isn't to do a Silicon Valley spray and pray," Mize said. "It's really to have calculated growth. This [capital] round could potentially take us to profitability. But profitability isn't the primary goal. Making sure we maintain our leadership position in the market on a global basis is the goal."

There might be a point, maybe two to three years down the road, where the company embarks on another round of fundraising, he said.

Lannon is providing both investment and advice to PostProcess. He draws on his experiences from working with his fellow co-founders to build up the business now known as Life Storage. Those co-founders all worked hard and took care of investors' money, he said.

Lannon looks for similar character traits in the leaders of companies he chooses to invest in. He also looks for a board of advisers – which PostProcess created on his suggestion – and whether companies have a talented financial official on the team.

Lannon formed a limited liability company, consisting of 76 investors including himself, that has collectively invested about $7 million in PostProcess.

Lannon believes the key to PostProcess's success lies in positioning itself in the marketplace as a software company.

"The proof is in the pudding," he said. "We've got to go ahead and get to profitability sooner rather than later, and then scale upwards."

Buffalo-based Rand Capital invested about $300,000 in PostProcess in 2016. "Jeff and Daniel were people that we wanted to invest our money with," said Allen "Pete" Grum, Rand's president and CEO. "That's the first thing that stood out."

And PostProcess was involved in an emerging technology adopted by some notable customers, he said.

Grum said the $20 million investment by Golisano comes at the right time in PostProcess's development.

"They're really in kind of a commercialization phase of the company. The industry has come around to where they thought it would be. That, combined, with their customers, they're doing some great things."

PostProcess doesn't disclose its annual revenues. But the company said its customers come from all kinds of industries, including Toro, Bose, Ingersoll Rand, and the Johns Hopkins School of Medicine.

PostProcess also has a location in France, and is building an overseas network of distribution partners. "We have a lot of global people coming here, specifically, to visit with a startup company," Hutchinson said.

Hutchinson marvels at how PostProcess has grown. "I'm proud that it has an impact within a global scale market, the impact that it's making as a technology company."

How will PostProcess put Grand Oaks' $20 million investment to work? Mize said his priority is hiring more talent. By the end of the year, the company's headcount could grow to about 100 people. The company will also reach out to more customers, in light of its geographical expansion, said Diana Robbins, vice president of marketing.

Lannon said he believes the key to PostProcess reaching profitability comes down to something simple but essential: selling its products effectively.

"We've got to get the message out there," he said. "It's got to be not something that's hidden in Western New York. We've got to make this thing well known.