Every year, as the calendar heads for spring and Lent looms, it’s that time again. My traditional avoiding of the “What’s the best fish fry in Buffalo?” question begins.

The query is especially vexing because I don’t have a good answer. My reverence for the fish fry itself is tremendous. Haddock (but I can live with cod) in beer batter, plus macaroni salad, cole slaw, potato salad, french fries, rye bread, and butter is as close to a prayer on a plate as it gets in Western New York.

Best, though? Between the variations in offerings, the vagaries of fry cooks, the fact that Lenten fish fries pop up like dandelions after the rain, and the restrained sample size recommended by my cardiologist, there’s no way I can offer more than a dabbler’s opinion.

That’s why I asked David Lyman. He’s a 42-year-old married father of four, a 1995 Depew High School graduate working as a wealth manager for Cetera Investors, who grew up with an insider’s view of fish fry culture.

At his mother’s side in tavern kitchens, he watched her perform the sacred rituals. Haddock lowered into batter, emerging ready for its transformative baptism in hot oil, emerging as one of Buffalo’s favorite meals.

This was at Danny’s on Genesee when he was 5 or 6, then Jimmy’s Corner (now the closed Nickel Creek), then Fireside on Central Avenue (now the Yelling Goat). These days, Pauline Lyman is the kitchen manager at Gene McCarthy’s in the Old First Ward. 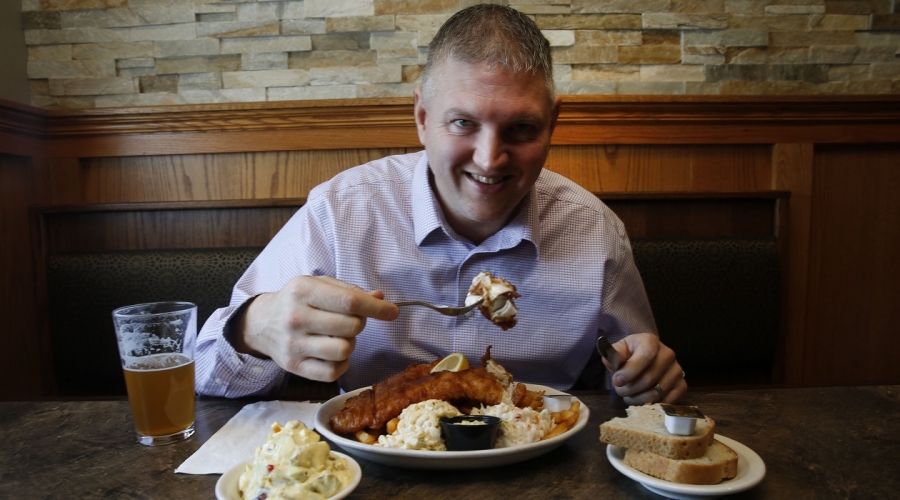 “It’s not just the fish, it’s the sides, everything taken together,” David Lyman said. “It's a team game, for sure.” (Robert Kirkham/Buffalo News)

[Sign up for the free [BN] Food & Drink newsletter to get the latest news about WNY restaurants delivered to your inbox every Wednesday.]

He’ll typically eat multiple fish fries each week of Lent. Finally, someone who has given the fish fry the attention it deserves. Finally, someone better equipped to answer the question: What’s the best place to get a fish fry?

“It’s so close and there are so many variables,” Lyman said at our first meeting, in Boston Hotel Steak & Crab House in Lancaster.

“You know from the first bite whether it’s going to be good, or chewy, or overdone,” he said. “There’s so many people in Western New York who can do it right, but then you get a bad one, and you’re like ugh.”

The fish fry: A beer-battered bridge that connects all Western New York

The fish is just the beginning, though. “Can the total package ... get above that line?” he asked. “It’s not just the fish, it’s the sides, everything taken together. It's a team game, for sure.”

The Boston Hotel in Lancaster's Friday haddock fish fry ($11.95) was a good example, with sides including mac and potato salad, cole slaw, french fries. Salt and pepper were called for, but the do-it-yourself seasoning is a style decision.

Despite the “hangs off the plate” mantra, size isn’t nearly as important as quality to Lyman. “I’m stuffed after a fish fry, and I usually get a half.”

He never used to take leftovers home, because what’s the point? Then he discovered the air fryer. “I was very impressed with the air fryer results,” he said. “I've tried many other ways and none have been good.”

The key is getting the complete fish fry constellation – fish, sides, bread – in sufficient quality, he said. “It’s everything together for the full experience.”

Lyman did offer one metric. “I don’t go to too many places twice,” he said. That’s partly because of his high standards for fish fry feng shui, partly because of the amount of ground he has to cover to check out nominations from friends and readers.

Pressed, Lyman agreed to share the names of five places he’s visited repeatedly, and would recommend first. He ranges widely, but these ended up not far apart geographically.

“Excellent off-the-beaten path corner bar feel, that is known for its fresh seafood, and the fish is no exception.” At $11.95, the combination has a standing line waiting on Fridays.

“Great value ($9.99) that includes a soup and salad bar, as well as all the sides and bread you can eat.” A classic neighborhood tavern from the old school.

A slightly higher price ($14.59) brings “an addition of spices in their beer batter that gives it a subtle, unique flavor enhancement” and superior sides, like potato salad fortified with hard-boiled eggs, and firm elbows in the mac salad. Owner Ken Kozminski, at it for 26 years, said the restaurant will put out 400 on a Lenten Friday.

“A light, golden brown Genesee-beer-battered fish that is consistently cooked to perfection.” At $13.75, it sneaks a little Polish-German touch in by offering to replace any side with braised sweet-and-sour cabbage.

“Great homemade sides that provide rich flavors to accompany a nicely cooked beer-battered piece of cod. A staple since I was a kid.” $13.50, with fresh cut fries and the required three salads that are Lyman’s overall favorites.

Beyond the Buffalo fish fry: Fish dishes from around the world