City Hall is normally the focal point of government business.

On Thursday, that focus switched to show business.

The occasion was the third day of filming in Buffalo for "Nightmare Alley," the new movie from Oscar-winning director Guillermo del Toro. The director and his cast – including Bradley Cooper and Rooney Mara – previously shot scenes inside City Hall and the Karpeles Manuscript Library Museum on the corner of North Street and Elmwood Avenue.

The film production necessitated the almost-unheard-of closing of Niagara Square, the iconic park and traffic circle directly in front of the 88-year-old art deco structure. For a day, the action around it looked more like it might have looked in its first decade of existence, as about 45 antique vehicles started rolling in around 10:30 a.m. Ten of the automobiles – dated 1927 to 1941 – came from the Buffalo Transportation Pierce-Arrow Museum, said museum owner James T. Sandoro. Many of the of other vehicles came from local enthusiasts found on social media and some auto were brought from New York City, he said.

For a while Wednesday and into Thursday, it wasn't clear if one of the city's best-known locales would be ready for its closeup. Del Toro brought his film here with the hope that it would look like a winter day, but the storm that rolled through the region brought with it high winds that could have created problems for some of the cranes being used.

But, appropriate for a movie set, the show went on

Producer J. Miles Dale said the conditions were a little "breezy," but said Thursday's snow "was actually kind of perfect. It's just enough to cover the square. ... This is nice. We got three, four inches. It was perfect."

Before filming started early Thursday afternoon in and around Niagara Square in front of City Hall, the approximately 200 extras dressed in 1940s-looking clothing and accessories passed the time standing around.

Thomas DeGraff, a 28-year-old graduate from University at Buffalo with a degree in architecture and historical preservation, got the call Thursday morning to show up on set with any clothes he has that look like they came from the 1940s. He brought with him a long, wool coat and a sweater from his father, but wardrobe provided the black hat, snakeskin-like briefcase and everything else, DeGraff said. 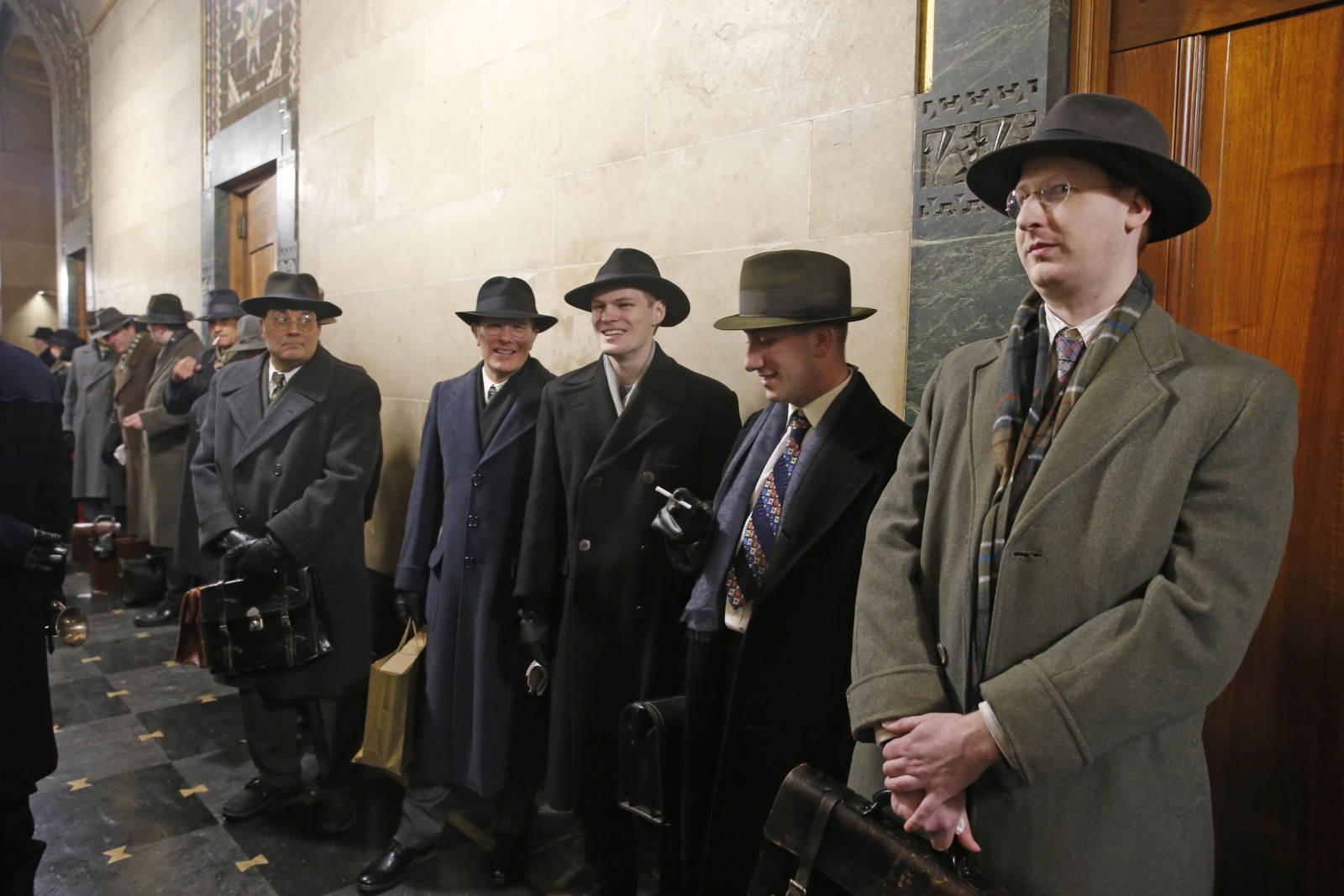 It was his first time on a movie set.

"It's just cool to be doing something different," he said.

Annmarie Bahny of Buffalo, has been involved in filming in Buffalo for years, including work as an extra on the movie "The First Purge" in 2018. Thursday was Bahny's second day as an extra on "Nightmare Alley." The day before, she played a married woman who was traveling with her husband in scenes that were filmed at Karpeles, which was fixed up to look like a bus terminal, Bahny said.

"It's exciting," said Bahny, 44, who had the opportunity to meet Cooper and Mara. Bahny's role on Thursday was to walk around Niagara Square as Cooper dropped money into a Salvation Army kettle surrounded by a group of singers on his way up the steps of City Hall.

A lot of advance preparation and attention to detail went into shooting Thursday's scenes. Local scenic artist Cindy Halloran started preparing the set at around 6 a.m. By about 10 a.m., she was "holiday painting" a shoeshine stand on the stoop of City Hall. The prop had two green chairs affixed to a black base. Halloran was using black paint to fill in missing or chipped paint spots on the black base.

"When paint is not there, it's called a holiday. The paint's on 'holiday,' " she explained. She and other members of United Scenic Artists, Local 829 IATSE, also worked on several other locally made movies including "Marshall," "The First Purge" and "A Quiet Place Part II."

All of the props need to look completely nostalgic, she said. The modern "bright metal boxes" on the lampposts, for instance, were spray-painted black "so they don't show up in the film" and so they're not distracting to actors while filming scenes.

"One of our jobs as scenic artists is to blend (props) into the background like it's a pre-existing thing so it doesn't catch the eye of the actor," Halloran said.

"If they feel like they're in a set that's real, they act better."