It's been a mild winter by Western New York standards, but the region was reminded Thursday that spring does not start in February.

Bizzard-like conditions to the south and biting winds throughout the area led to one of the only weather events of the season. High winds led to a jump in Lake Erie water levels, school closings, tough driving conditions, and even moments of whimsy and second thoughts for some school superintendents.

And it's not over.

For Buffalo, the Northtowns and Niagara County, small amounts of snow are expected while winds will continue to be strong, as high as 40 mph. The Buffalo forecast calls for a 60% chance of precipitation and less than a half-inch of snow during the daytime Friday; snow amounting to less than 1 inch is in the Friday night forecast.

For the Southtowns and the Southern Tier, the blizzard warning is expected to remain in effect through 4 p.m. with much higher cumulative snow totals possible.

"It's going to continue all the way through Saturday; this is a long-lasting event," said National Weather Service meteorologist Jon Hitchcock. "The 1- to 2-foot accumulations we’ve had in the forecast are a three-day total. We won't get there till late Saturday."

But the two-part storm left some wondering: This is a blizzard? 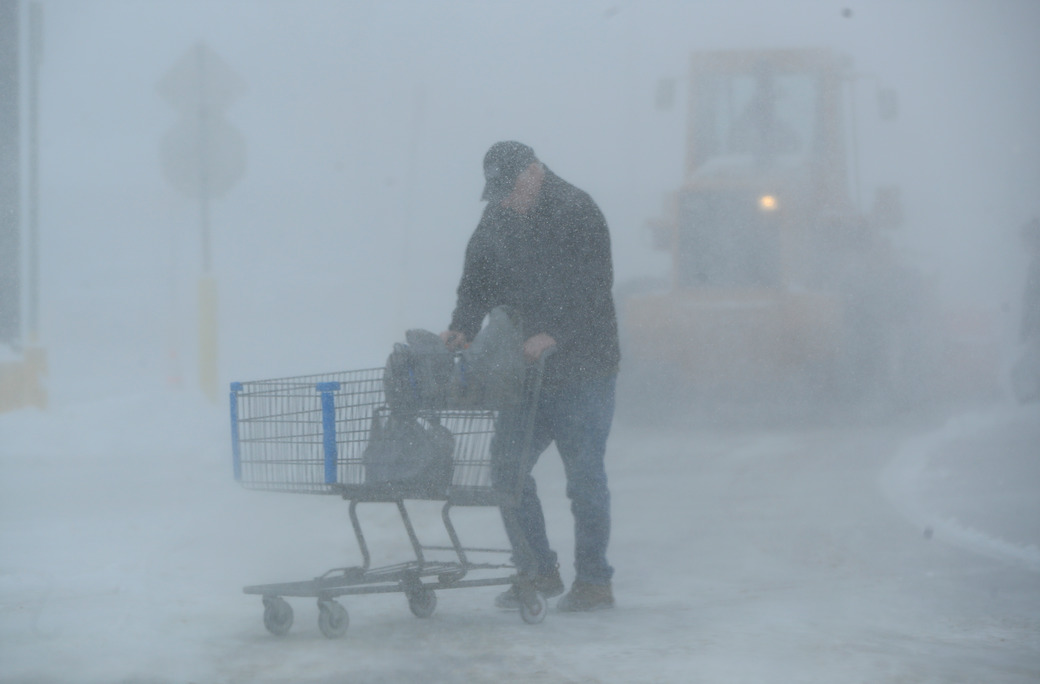 A Walmart shopper makes his way to his car in Springville Thursday. (Harry Scull Jr./Buffalo News)

For a storm to be officially defined as a blizzard, there needs to be visibility of a quarter-mile or less in blowing snow, with sustained or frequent wind gusts over 35 mph – and those conditions must last for at least three continuous hours.

Some of the higher elevations, such as the Boston Hills and Wyoming County, experienced poor visibility and winds gusting over 35 mph for a couple of hours Thursday morning. They were expected to meet the three-hour mark overnight, Hitchcock said.

"On the exposed hilltops the wind is much, much stronger," he said.

Highway crews in Boston found that out, according to Highway Superintendent Robert J. Telaak.

"Up on the top where the wind blows, it's pretty nasty up there. Once it starts snowing again later today, and the winds pick up, it's probably going to be a slow-going night up on the hill top," Telaak said.

Snowfall totals for the storm through late Thursday morning – posted by the National Weather Service – included 5.5 inches having fallen in Gowanda and North Tonawanda; 5.3 in Jamestown; 4 in Wales Center; 3.5 at the NWS office at the Buffalo Niagara International Airport in Cheektowaga; and 2.4 in Williamsville.

In Stockton and Sherman in Chautauqua County, the National Weather Service recorded 10 inches and 6 inches, respectively; 8 inches was recorded in Colden and 6.3 inches in Sardinia, both in Erie County; and in Niagara County, 4.3 inches of snowfall were measured at Love Canal in Niagara Falls.

The Lake Erie water level at Buffalo had risen 3 feet Thursday morning. Waves crashing across Route 5 forced the closing of a section of Route 5 between Big Tree Road and LaSalle Avenue in Hamburg. 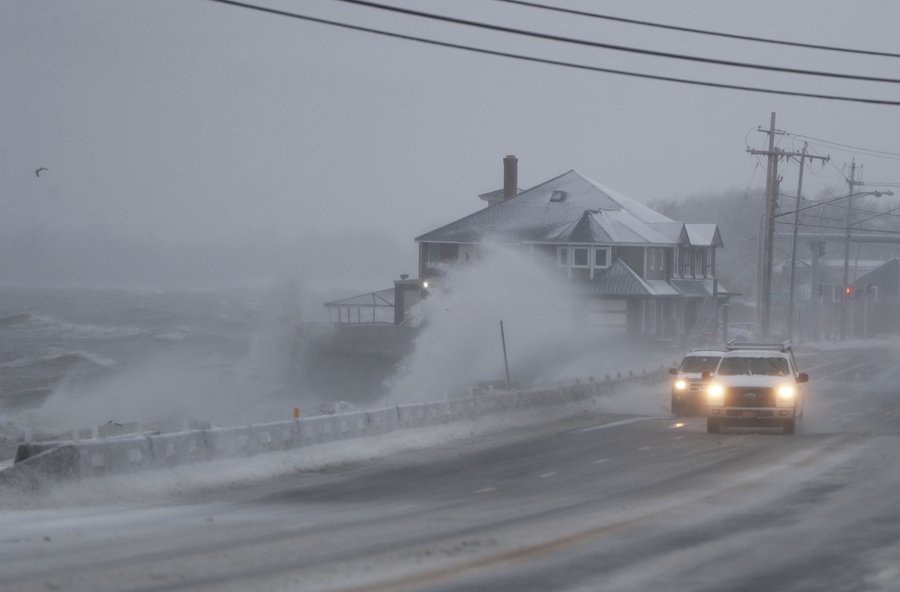 But the cold, windy weather did not deter Sharon Sookdeo and Chekesha Johnson, who rushed into the Metro Rail train stopped at Canalside Thursday morning, happy for a respite from the biting winds buffeting downtown.

"I don't think I'm dressed enough for this," said Johnson, who was wearing a thick parka, scarf and gloves.

The two visitors from New York City were among the hardy few who were venturing outside as a winter storm hit Buffalo.

For Tim Greening, the weather was much ado about nothing.

Greening, who was in town for the Lumineers concert Wednesday night at KeyBank Center, is from Watertown, where they expected blizzard-like conditions and 1 to 2 feet of snow Thursday.

"This is an inch of snow," he scoffed. "I was surprised to find all the shops here closed," he said of downtown.

It's been a surprising winter by most weather standards, with snowfall totals below average and temperatures consistently above normal for the time of year. Even the traditional snow belt areas south of metro Buffalo have gotten off relatively easy in 2019-2020.

The potentially dangerous conditions that came with Thursday's forecast seemed a classic case of "better safe than sorry." Still, what would the late Mayor Jimmy Griffin – who famously suggested Buffalonians "grab a six-pack" and stay home during the Blizzard of 1985 – have thought about Labatt Brew House on Perry Street closing Thursday because of the weather?

One activity the weather did not disrupt was the filming in Buffalo of  "Nightmare Alley," by director Guillermo del Toro, who came to Buffalo for the snow, but not the high winds.

Meanwhile, virtually every school in Erie County was closed Thursday, including one that closed with a flourish.

"I've never called a snow day this late, ever," Frontier Superintendent Richard Hughes said. "I thought I was going to make it to March." 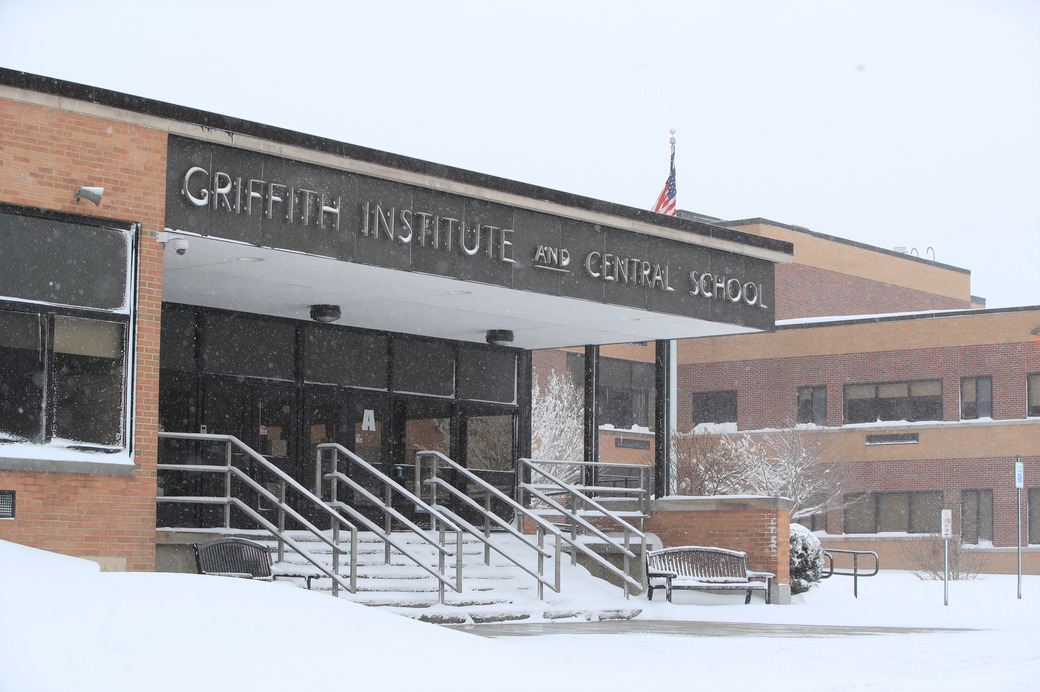 So he had some fun closing school, with help from Cloverbank music teacher Scott Panfil. In a spoof of Blanco Brown's "The Git Up" song, Hughes told his students in a video "You don't have to Git Up."

"Get comfortable, grab a blanket and grab a book, partner! If it snows a ton, no worries, because you don't have to leave. You don't have to git up and get out early," he crooned.

Hughes gave all the credit to Panfil, who put the video together.

"You just try to do it for fun and you hope people get a kick out of it," Hughes said.

Please watch below for a very important video message "You don't have to git up"....Snow day for Thursday February 26th!!! #SnowDayReading #FalconNation #BleedBlue Shout out to @MrPanfil pic.twitter.com/1KnVWI2fmV

Springville-Griffith Institute Superintendent Kimberly Moritz was having a little less fun. She was kicking herself for closing school Thursday morning. She saw dry roads and sun outside her Gowanda home, and took to Twitter:

"Where, exactly, did this blizzard hit? Because I'm really regretting my decision to close schools. When the NWS and the news talk blizzard and huge snowfall, I can't ignore that," she said in a tweet.

Moritz went on to apologize to "every working parent who had to take off a day from work for child care." But some district residents responded, saying weather was bad in their area.

"Come to east concord. where the wind is 30+ mph and i can’t even leave my driveway more less drive more than 30 seconds down my road," one replied on Twitter.

Moritz told The Buffalo News that she also heard from the school resource officer who drove around the district Thursday morning, and told her she made the right call.

"That's reassuring," she said. "It is always a much more excruciating decision than I imagined before I became superintendent."

The decision may have been little easier, she said, because the district had used only one snow day this school year.

As for the decision about school on Friday, she said: "I’ll go through the agony again ... of trying to make the best decision."