“People walking or riding by the large, red-brick plant of the National Aniline Division, Allied Chemical & Dye Corporation, on South Park Avenue, are aware of only two things – the characteristic odor and the fact that it is a chemical plant,” wrote newsman Ernie Gross in The News' Weekend Magazine in 1946.

The view of the National Aniline plant above is from the old steel truss Elk Street bridge, between the Seneca-Babcock and Valley neighborhoods of South Buffalo. All of the infrastructure shown in the photo, save the brick shell of a single century old ice house, has been lost to time. 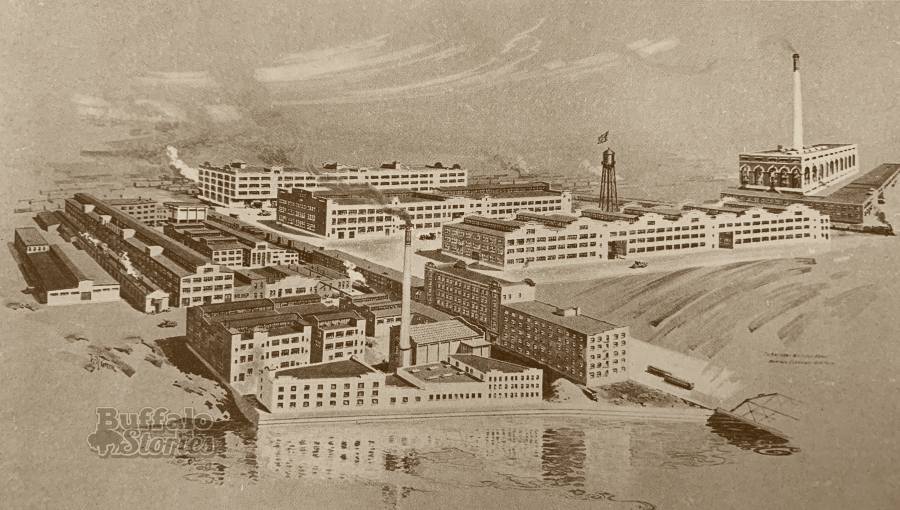 “The cluster of buildings and tanks, pipes, and girders along the north bank of the Buffalo River at South Park Avenue has been a local fixture since 1879 when it was established as the Schoellkopf Dye Works. Today, as the National Aniline Division of Allied Chemical Corp., it is a Buffalo by-word,” read a 1961 story in the Courier-Express.

There were more than 3,000 different chemical products produced there at the time, everything from laundry soap to polyurethane foam to the company’s most famous product, blue indigo dye used in the production of blue jeans.

At one point, every pair of jeans made in this country were dyed with indigo produced along the Buffalo River.

Buffalo Color, the last operating arm of what was once Allied Chemical and National Aniline, still provided 170 jobs in South Buffalo’s Valley neighborhood as late as 2000, after winning international trade relief that year to help continue on as the last American manufacturer of indigo dye.

Three years later the competition was just too much and Buffalo Color closed. Much of the plant’s works were carefully cut up, and placed in boats in the Buffalo River to be shopped to China for a dye plant being built there; thus ending America’s role in the coloring of the most American of consumer goods.