Opportunity can change lives and a fresh start can produce satisfying self-sufficiency.

The Grant Street Bazaar, a collection of seven food booths and other retailers at 68 Grant St., represents entrepreneurial hope for aspiring restaurateurs at an affordable buy-in: $1,000 per month in rent, with first and last month's payments as a deposit.

In the cases of the Robin family and 22-year-old Omar Muflahi, the Grant Street Bazaar has jump-started a transformation in their lives.

Eight years ago, Sholmeat Robin sat in her office in Islamabad, Pakistan, with no idea her life would change completely in the next two hours.

The director at St. Thomas Church had worked with migrant children and families in Pakistan slums for more than two decades, advocating for Christians in an overwhelmingly Muslim city. Her husband, Robin Gabrail, had been a chef for more than 30 years, cooking for diplomats, military officials and other foreign visitors to Pakistan.

But their lives were put in imminent danger after religious persecution involving high Pakistani officials. The Robins had to frantically pack their belongings, say a heartbreaking goodbye to the family dog and fly to America to seek asylum.

"We were not trying to show anybody that something was unusual, but we were running for our life," Sholmeat said from a booth in the bazaar.

"Half of my family didn't know we left," Gabrail said.

"We'd visited America before, but we never thought to come and settle down," added Sholmeat, whose degree in medicine from Liverpool, England, carries no weight in the U.S. "Maybe it's exciting when you're young, but when you are aged, you want your life to be settled, you know?" 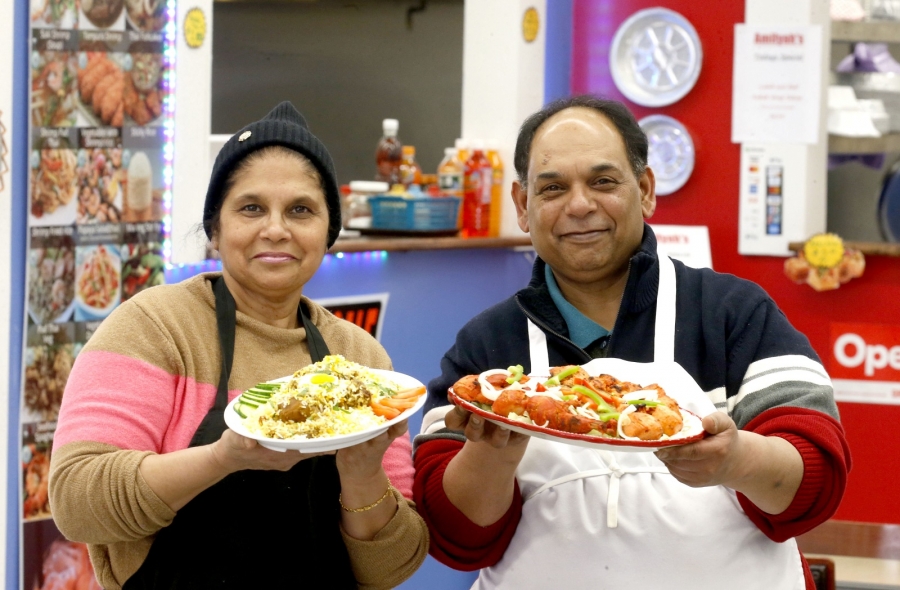 Omar Muflahi nearly earned a college degree, but soured on accounting when he learned of the profession's high suicide rate. The third-generation American, whose family hails from Yemen, graduated from Lackawanna High School while his relatives tried to stay afloat through a laundromat and clothing store but struggled to find their niche.

The independent Muflahi needed to provide for his growing family – he married in late 2018 and became a father in January. His Grant Street Bazaar booth, formerly Middle Eastern Cuisines, now reflects his daughter's name: Amilyah's.

[Related: Know the dishes, vendors behind the Grant Street Bazaar]

"Life is tough," Muflahi said. "I see my uncles and my dad, they went through struggle; they had money, then everything got hard. They couldn't figure out their way. If any of my sisters or brothers or my mom fall into that situation, I've got to be the trampoline to catch them."

At the Grant Street Bazaar, the Robins and Muflahi have joined others in creating an international food hall with seven booths serving such diverse cuisines as Somali, Sudanese, plant-based African, halal Thai, Middle Eastern and Pakistani-Indian. 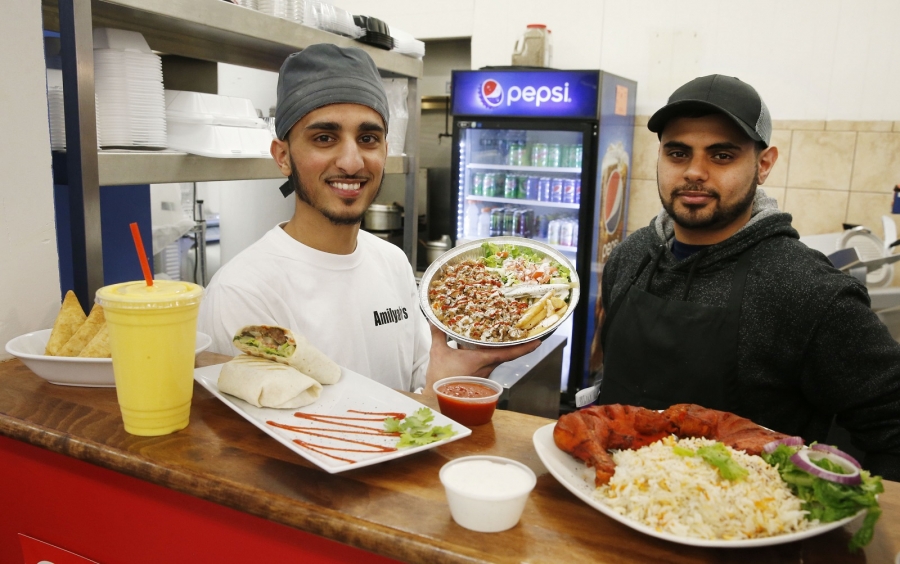 Omar Muflahi, left, is the owner-operator of Amilyah's, named after his young daughter. He poses with Gabriel Thabit. (Robert Kirkham/Buffalo News)

Over at Amilyah's, Muflahi is proud of his chopped chicken over rice, which has customers requesting more of his creamy white sauce. Inspired by New York City food-cart culture, Muflahi fashions nearly all the Middle Eastern dishes – and intends to eventually run a food cart himself. His wife, sister and mother chip in, too, preparing sambusa (deep-fried pockets filled with meat or vegetables).

The Grant Street Bazaar has potential as a wide-reaching destination thanks to its variety of cuisines and stirring backstories. And, given their precarious nature, these new businesses have incentive to churn out consistent, quality fare.

"[The bazaar] gives an entrepreneurial spirit to people – normally they wouldn't be able to start a whole business like this, but now they're able to become their own boss, they're a small business owner and are doing what they can for their livelihood," said Rashik Chauhan, who is part of the bazaar's ownership family along with his parents, Sue and Raj. 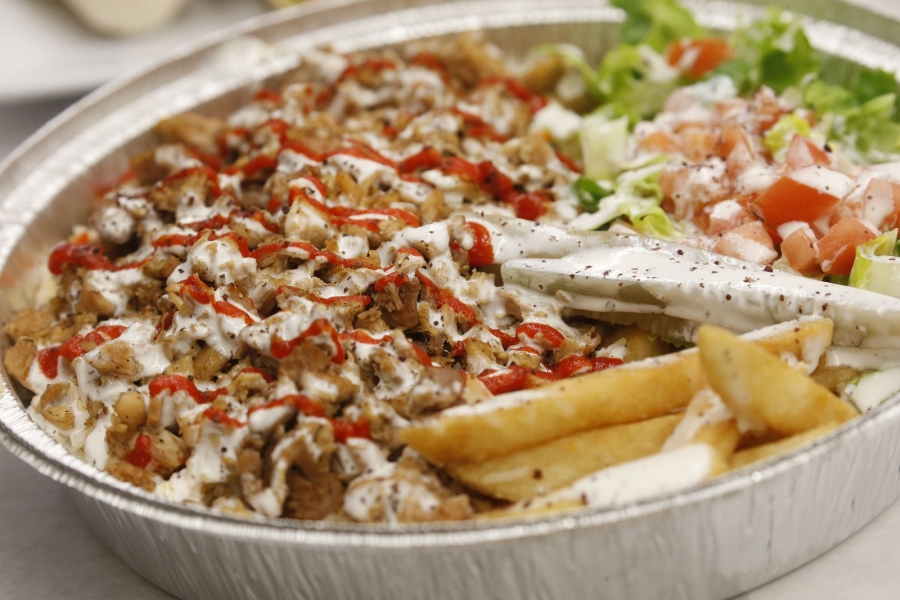 Chopped chicken over rice, topped with hot sauce and a creamy white sauce, from Amilyah's in the Grant Street Bazaar. (Robert Kirkham/Buffalo News)

Native to Haryana, India, Rashik moved with his parents to Buffalo when he was 2 months old. Sue and Raj have run ethnic grocer Vineeta International Foods (98 Grant St.) since 2012 after operating an Amherst market for years prior.

Their venture into the city was opportune, as refugees and immigrants – from Africa, Asia and the Middle East – converged upon the West Side during Buffalo's resettlement boom.

Shortly after opening Vineeta, Sue Chauhan heard a common refrain from customers: there was great demand to open small food ventures, but there was a staggering wait list – rumored to be in the hundreds – for a chance at the West Side Bazaar.

"They don't have a place for us, what should we do?" Sue Chauhan recalled her customers saying.

After flirting with leasing the Vineeta space to WEDI, an unconnected venture seeking expansion at the time, Sue took initiative by planning her own bazaar, a passion project to complement the family store.

"We love this area," said Rashik, now an articulate, business-minded 23-year-old. "I spent 17 years of my life on West Ferry Street, so it's not like I want to see it fall apart." 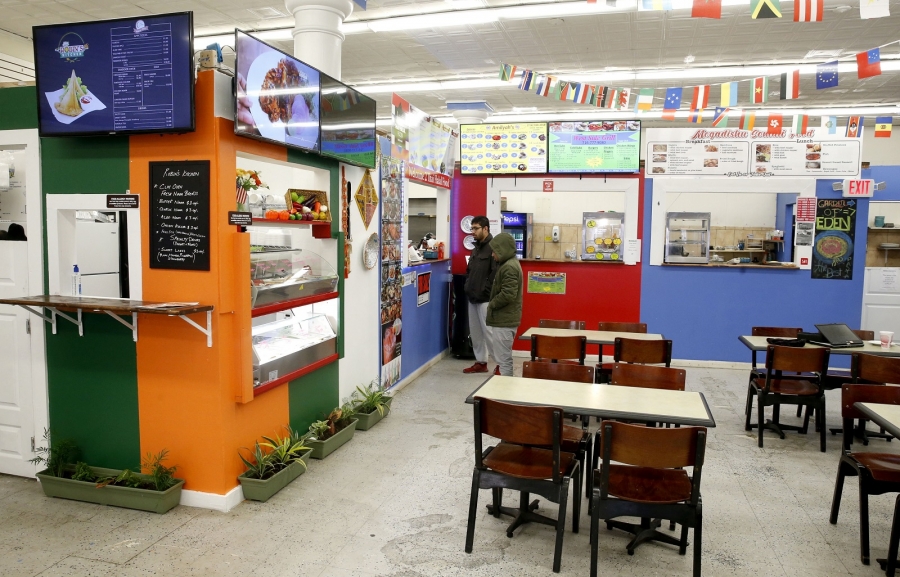 The booths along the left and rear wall of the Grant Street Bazaar. (Robert Kirkham/Buffalo News)

Because of their dedication to the West Side, the Chauhans sought help. They worked with the Small Business Development Center at SUNY Buffalo State, where Rashik attended before transferring to the University at Buffalo; Niagara District councilman David Rivera; and Assemblyman Sean Ryan's office, across the street at 65 Grant; and were given valuable advice and connections, if not financial resources.

"It's encouraging to see someone who already operates a business on Grant Street decide to take on an additional project in this area," Assemblyman Ryan said in a statement. "This business has turned what was a vacant storefront into a business that will help continue the revitalization of our neighborhood."

Much of the interior rehab of what was a former convenience store at 68 Grant St. was delegated or completed independently by the Chauhans, with help from a small construction grant. Improvements have been slow, however. The Chauhans are negotiating with their landlord – with whom they have a five-year lease with first option to buy – on how to tackle major projects, such as the floor. Removing three center booths in favor of more customer seating represents an immediate improvement.

The Chauhans recognize the bazaar must be more noticeable from the street; a reorganization or kitchen expansion could help.

Unlike the West Side Bazaar, where the Westminster Economic Development Initiative oversees and educates tenants, the Grant Street Bazaar lacks a robust organizational backbone and support system. Its exterior and interior remain haphazard, with little indication from the street that a group of aspiring restaurateurs grinds away inside.

But given their lack of financial backing and ongoing negotiations with their landlord, Grant Street Bazaar's owning family has done well to create a safe space. Much of the responsibility, then, falls on the vendors themselves. 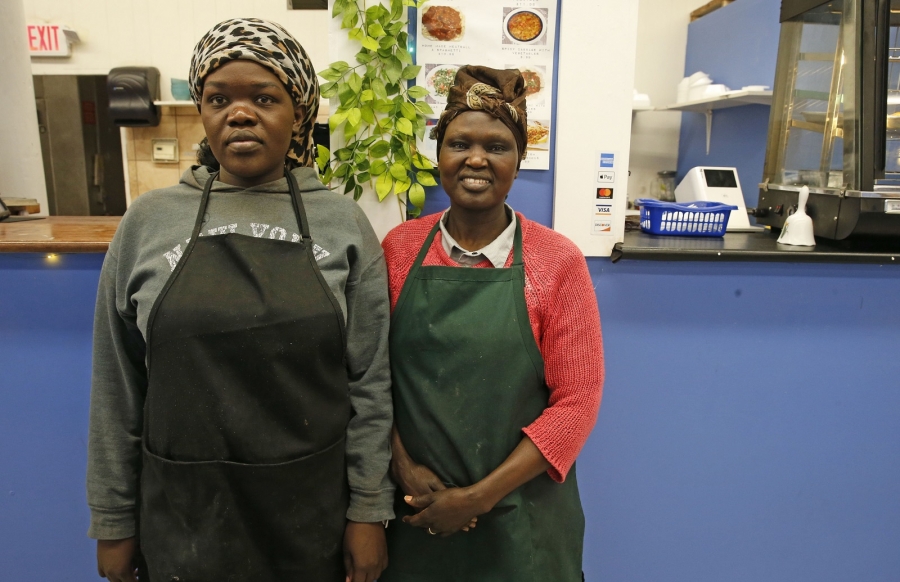 They must do more than take orders, cook and serve; extra work, such as cleaning up after customers and maintaining order when rowdy groups enter, is crucial, all while scraping by to pay rent by balancing a budget.

"[Grant Street Bazaar] is our business, we have to take care of it. Nobody else is going to ... " said Sholmeat, whose orange booth and row of plants have made an impression.

While vendors may bring their own equipment, the bazaar provides six stove tops, one fryer, a grill and two specialized burners in total.

"It helps build community," said Rashik of the cooperation and close quarters. "They understand each others' situations. They empathize with each other more ... They've been good at self-policing because they're a mutual business."

There's little stability, though. Leases are month-to-month, and at least three ventures have already left – including Chef Al's and La Saveur – or will soon, like Jailored Tea & Coffee.

The toughest adjustment for some is the daily grind, limited resources and personal sacrifices required.

Facilitating opportunities has been rewarding for Rashik, who – as an immigrant – grasps the difficulty of starting anew in an unfamiliar place, just as his family did two decades ago.

"This is a chance to see people turn their lives around," he said.

For now, the business owners are ready to grind.

"I'm a workaholic, so I see money before school," Muflahi said. "I'm an entrepreneur now for sure, straight business." 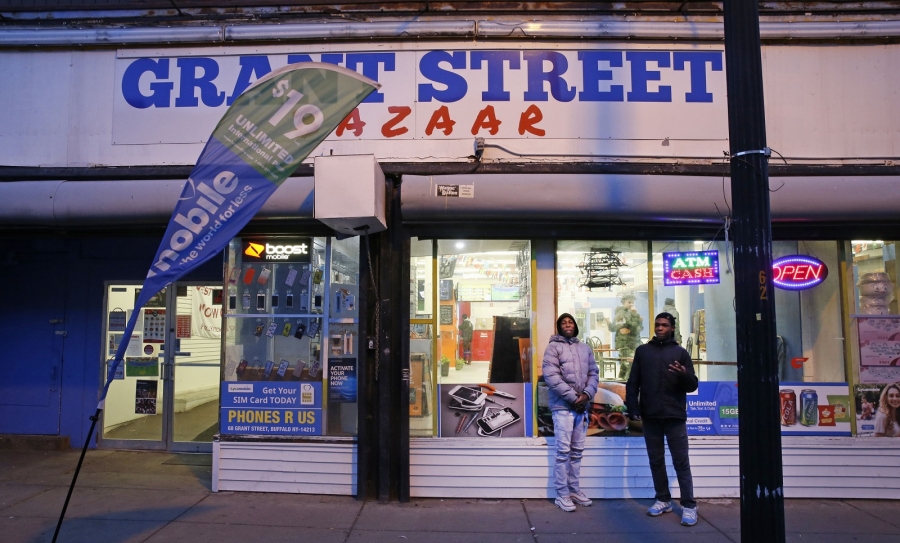