When a scion of a legendary Buffalo pizza family opens his own restaurant, you might assume you already know the menu by heart: pizza, wings and subs, the holy trinity of Buffalo chow.

But out in the Town of Boston, in a former Subway franchise space nestled beside the smallest Tops supermarket I’ve ever seen, Jonathan Jacobbi is offering a surprising assortment of dishes that stand out in the Southtowns dining landscape like the moon on a clear night.

Burgers, yes, but also a turkey burger flavored with Hatch green chile. Salads, sure, but the Caesar is kale, and the meatball salad comes with herbed whole-milk ricotta. Steak? Only Zittel’s grass-fed beef.

Pizza? Yes – but Roman style, topped more judiciously and presented in an oval the size of a stretched-out rugby ball. Thus the weatherbeaten Casa di Pizza sign hanging in the vestibule is both signifier and camouflage for what happens inside the doors at BOCO Kitchen.

First, a word about those doors: the slamming is jarring at first, but you get used to it. Not so much the cold draft coming through the front window.

The servers were warm, though. Ours sold us on the “secret family recipe” chicken soup ($3.50), an amiably creamy chicken rice with sliced carrots, peppery and a hint of Romano, just the thing to ward off the chill. Families are also in mind in the $5.50 children’s menu, offering peanut butter with marshmallow spread or banana, fresh fruit and drink, and fried chicken tenders. 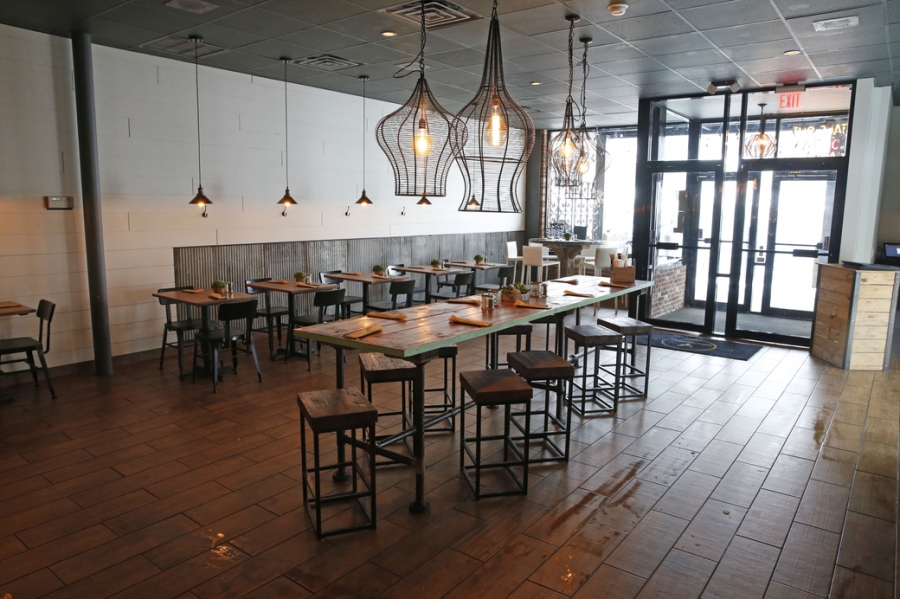 Mac and cheese bites ($6.50) turned out to be two inch-thick slabs, together the size of a paperback book. With a crunchy crust, the macaroni matrix was lightly cheesed, but the spicy ketchup picked up the flavor reminding me of the curry tamarind sauce at other places.

An arancini ($7.50) a bit bigger than a baseball, topped a lemony arugula salad. Its mozzarella core was molten, but the fried shell turned chewy, around underseasoned rice.

A fried mortadella sandwich ($11.50) was a significant upgrade over the fried bologna counterpart. The amplified porkyness of the Italian charcuterie, which soaked splendidly into the roll, had lots of mozzarella and caramel-tinged onions. It was soulfully delicious. 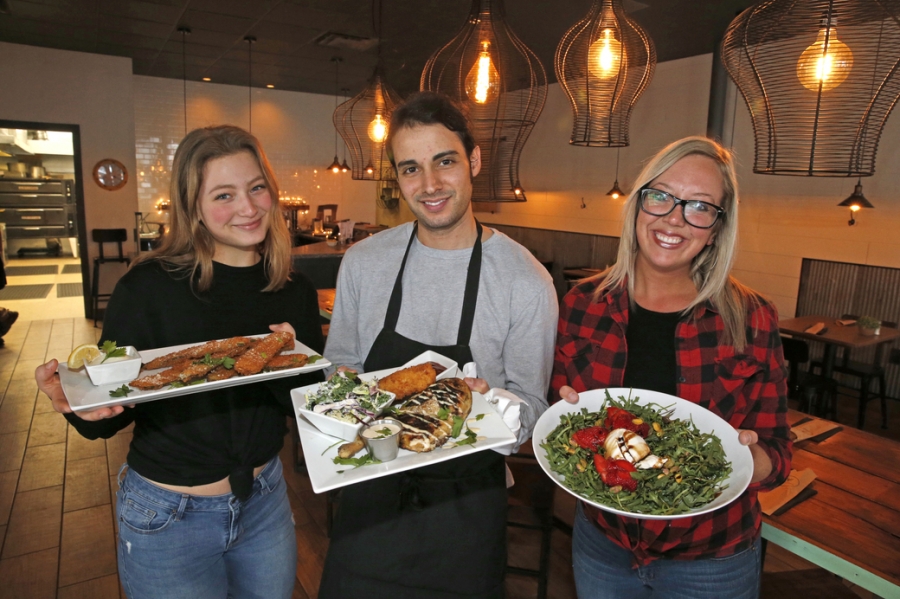 Gnocchi Bolognese ($16.50) was a bowlful of pasta dumplings squishier than I like, almost spreadable, under meat ragu, husky with lamb, robust but lacking long-cooked savor. House salads that come with pasta dishes are fully fledged, vegetable-wise, and could satisfy on their own.

Spinach lasagna ($16.50) featured sweeter tomato sauce and ricotta, and generous Bolognese, under an emerald corona of fried spinach that made the routine remarkable.

Speaking of which, the turkey burger with Hatch chiles ground into it ($11.50) has my vote for offbeat burger of the year. Turkey is what the low-fat people go for, and it’s usually a bland puck. At BOCO, it’s juicy and shot through with rousing green chile flavor, topped with sliced fresh green apple for a burst of freshness. Get the patty that way and it’s an outstanding lowish-fat burger.

As regularly decked out, it’s decadent, topped with havarti and avocado mayonnaise. Jacobbi said he had not been to New Mexico, but I bet he would love its chile-centered cuisine. 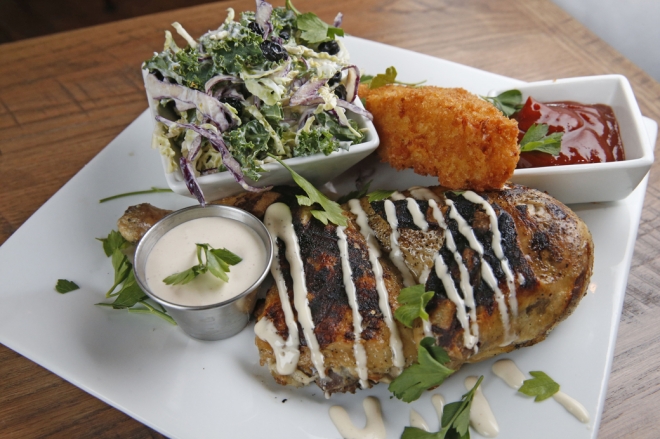 The Brick Chicken features a half-chicken, marinated and grilled with Alabama white sauce. It is served with BOCO mac & cheese and BOCO slaw. (Robert Kirkham/Buffalo News)

First score: This apple crisp was crunchy, unlike, oh, practically every version I’ve had in recent memory. Second, the chile-apple combination – already explored in the turkey burger — is gold.

Pizzas ($12.50) aren’t the cheese-quilted Buffalo style that made Casa di Pizza famous. Roman style, at BOCO, is an oblong crust, about half a regular-sized large pie, carrying topping combinations that steer their own course. Ever had fontina cheese drizzled with maple syrup under a sheaf of arugula? Me neither – and as it turns out, the buttery cheese and peppery greens are happy companions with the sweetener.

Another unusual pizza offering is a Utica-style pie, which flips the usual construction by putting a sheet of sausage on the dough first, covered with mozzarella, then tomato sauce. You can put those on a pizza in any order and I’ll dig it. These were tasty numbers, even if the crusts were tougher than I expected.

Though the restaurant comes from Italian rootstock, its most remarkable produce was original compositions. Here’s to Jonathan Jacobbi pressing on, while the community hopefully learns to enjoy a place whose motto could crib from another famous family: A little bit country, a little bit rock 'n' roll.

Hours: 4 to 9 p.m. Tuesday through Saturday. Closed Sunday and Monday.

Atmosphere: cool in the country 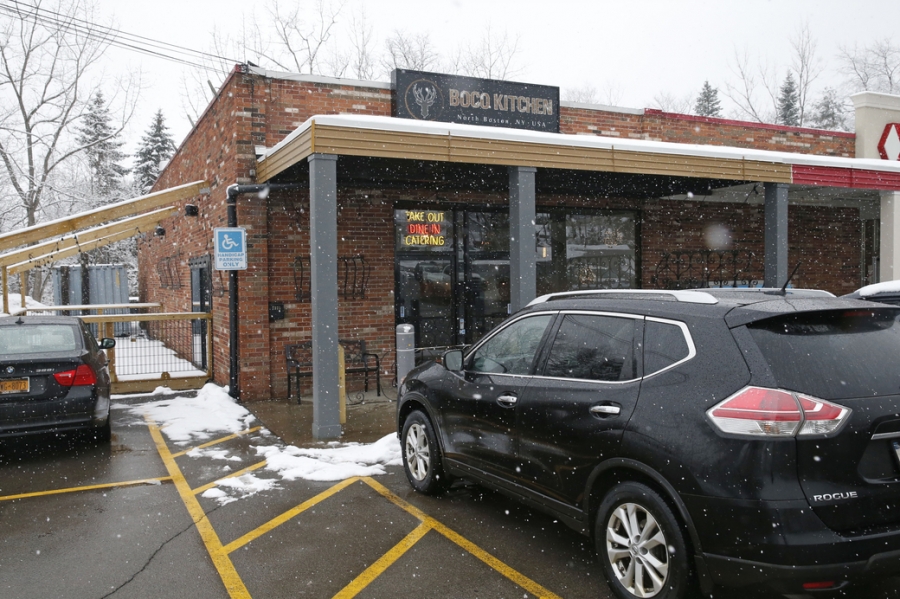