His job over the next two months: Deciding the best option for the best value that will breathe more life into the Bills’ attack.

Here were the key takeaways from Beane’s 20-minute meeting with reporters Tuesday at the NFL scouting combine.

1. The Bills want a difference-maker, regardless of specific characteristics. Yes, the team could use a tall receiving star to go with their collection of relative Smurfs. But Beane doesn’t sound like he is going to pigeon-hole himself.

“We’re not just looking for a certain thing, a speed or a size,” Beane said. “We’re looking for good players that we know can come in and fit alongside what we’ve already got – John Brown, Cole Beasley and the rest of that group. ... Honestly, I’m looking for a good player.”

Beane stressed the options before him in the heralded WR Class of 2020 are a smorgasbord. Upwards of 20 receivers could be taken in the first three rounds, according to media draft analysts.

“Receiver, of all the positions, probably comes in the Baskin Robbins’ 31 flavors,” Beane said. “Size, speed, length, run after catch, all sorts of variables. There’s really small guys that do a lot of the stuff Isaiah McKenzie does behind the line of scrimmage. There’s guys I call playing above the rim.”

“In all seriousness, this is a deep receiver draft,” Beane said. “I feel more comfortable about that now. I was asked about it at the Senior Bowl and still was doing some recon on these guys. One of the last things left is the medical on some of these guys and make sure they medically check out. If that happens, I think it will be a very deep position, probably the deepest in the draft.” 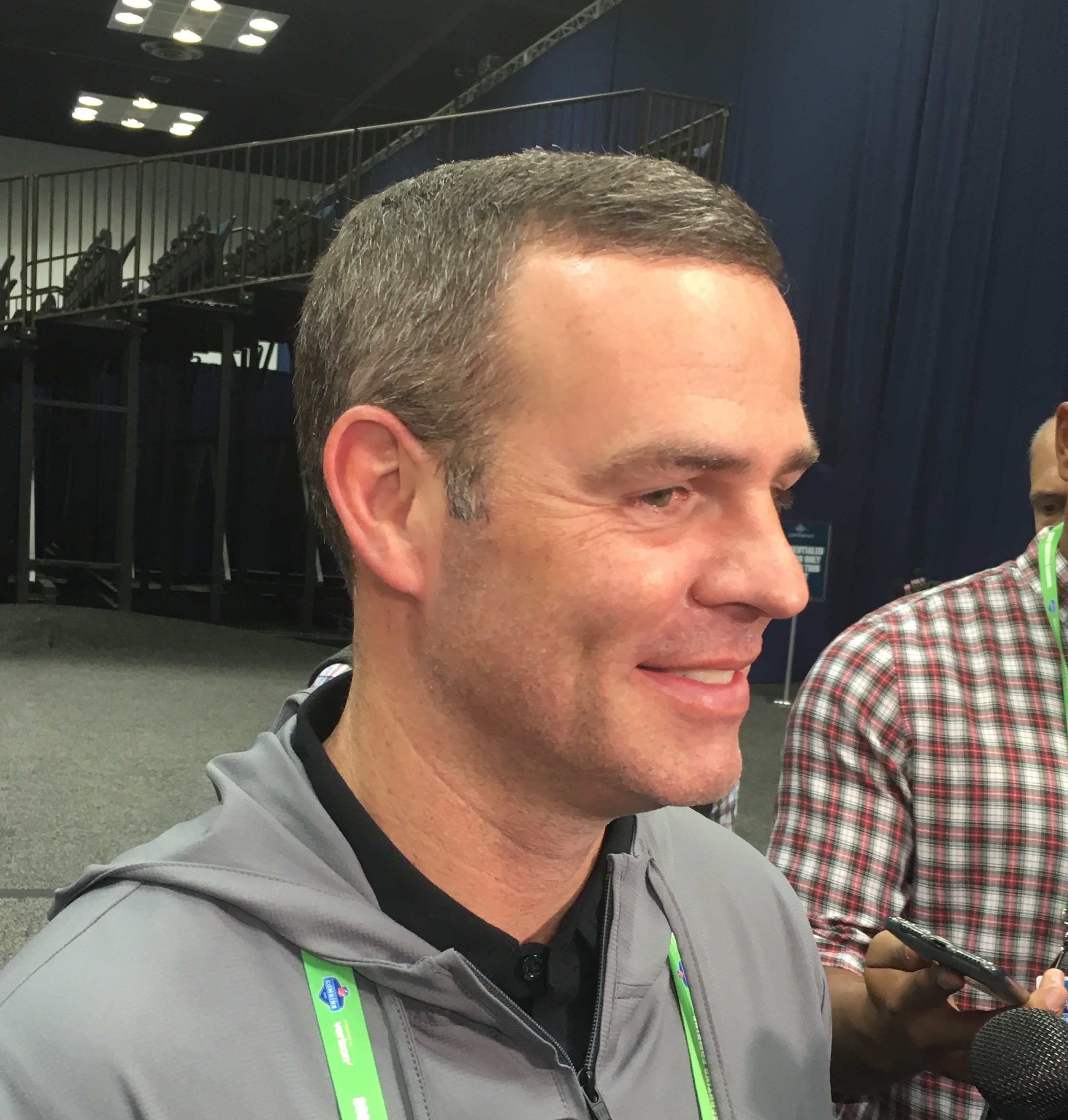 “We were talking about it the other day,” Beane said. “There’s going to be guys drafted on the third day of the draft who may come in and take a veteran’s spot on a team. It’s that deep.”

You want big? The Bills might get 6-foot-4 Tee Higgins of Clemson in the first round, 6-5 Michael Pittman of USC in the second or 6-3 Bryan Edwards of South Carolina in the third. You want a run-after-the-catch, jet-sweep demon? The Bills could land Colorado’s Laviska Shenault or Arizona State’s Brandon Aiyuk in the first. Pure speed? Maybe, if they’re lucky, Alabama’s Henry Ruggs III lasts to No. 22.

2. The Bills aren’t kidding themselves about the state of the offense, despite the 10-6 record in 2019. The Bills ranked 24th in yards, 23rd in points and 26th in passing. Beane put the onus on himself.

“We need to score more points,” Beane said. “There’s so many reasons why. You’ve got to protect better, you’ve got to run the better, you’ve got to throw the ball better, we’ve got to catch it better. We’ve got a lot of work to do. It starts with me, making sure I’m bringing in the right personnel. There were some things we did this offseason and last year that helped. I thought Brian Daboll and his staff and Josh (Allen) took a step in the right direction. Obviously, it wasn’t enough. We’ve got to take a bigger step next year. Those guys would be the first to tell you we’ve got to grow.

"Again, there’s no more blame on anybody than I look at the man in the mirror on that. We’ll continue to look to add pieces here in March and April and see what it looks like after the draft.”

“John Brown probably gave us our most explosive plays, and Dawson had a couple explosive plays, and Devin had a few,” Beane said, referring to Dawson Knox and Devin Singletary. “We didn’t have enough explosive plays. The less explosive plays, the more 10-, 12-play drives you’ve got to have. What makes those hard is one penalty sets you back. All of a sudden you get a holding and you’re in second and 20 it becomes hard to get a first down. That’s where you saw the Chiefs have a Tyreek Hill, and he takes it to the house in one play. You’re always looking for explosive guys.”

3. Beane pays a lot of attention to the sweet spot for positions in the draft.

“It’s important for us to get our board right, and make sure we’re putting a value on it and see where the value is,” he said. “How much better is this guy we have a first-round grade on than a guy in the mid-second or even into the third? Then what other positions of value are up there? If we’re on the clock in the first round and there’s a receiver there and a player at another position — and they’re both a similar value and I look down and see, man, it’s a long way before the next one at the other position. I probably should take that, knowing there’s more guys here (at receiver).

"But again, the receiver might be sticking out as clearly the better player, and if that’s the case you take the best player on the board.”

4. Odds are that contract extensions for players entering the final year of their contracts probably aren’t happening until May or later.

“The way it’s worked out, I’ve done more after the draft since I’ve been here,” Beane said. “We did Jerry. We did Hauschka. Eric Wood. There may have been one or two others. There’s just so much going on from when the season ends through the draft and free agency, it’s hard to slow down and focus on guys you already have under contract. Things will slow down a little bit for us on the personnel side in mid-May where I can kind of focus. I would not be hesitant to do a deal now if it made sense, with the agent.”

“I think it is regardless,” Beane said. “I think even if we signed back both Shaq and Jordan it would not deter me in any round to take another pass rusher. I think it’s one of the premium positions. The elite ones get paid. After the quarterback, that’s usually the next-highest-paid position.”

6. The pool of edge rushers for the Bills is significantly smaller than at receiver in part because a bunch of them fit the 3-4 better.

“The one thing is identifying which guys can play in our 4-3,” Beane said. “There are some rushers that are probably best suited for 3-4, and I would worry about them putting their hand in the dirt for us and what their run game would look like. You can have the greatest rushers in the world, but if you can’t get to third and long, then we can’t pin their ears back and go.”

7. Beane doesn’t like the reduction of interviews from 60 to 45 at the combine.

“Probably the thing I was most disappointed in was going from 60 to 45 interviews,” he said. “So I’ve got to figure out how we can make up for losing these 15 guys. We’ll still get out. I may find myself out on the road even more in March to try to get my hands on as many guys as I can, because I really want to get to meet as many as I can before I would turn the card in and say this guy is going to be a Buffalo Bill.”

“Star has been a great player for us and done a great job,” Beane said. “Unfortunately, he doesn’t get the credit he deserves. I’m probably his biggest defender out there, and I’ll continue to be. If you ask our D-line and ask our linebackers ... you go ask Luke Kuechly in Carolina, I know how much he loved him and told me he missed him when he left. This guy eats blockers. He helps our run game. One of the biggest things we struggled with in 2017 was our run defense. If you don’t stop the run, you can’t get to third and long to let the pass rushers free. That’s what Star does. We did work a deal with him which gave him some guaranteed money and kind of protected him, but he gave us something back.”

9. Beane identified one person whose draft stock is down.

Coach Sean McDermott barged into the middle of the GM’s group interview to ask if Beane could comment on the athleticism of his head coach.