The long-advertised turn to more wintry weather later this week is still a thing, and some aspects of it are a sure thing. The greatest uncertainties lie in snow and lake-effect snow placement and amounts.

Having started the week with a very mild Monday, this probably makes it that much harder to picture measurable snow and temperatures in the 20s in just a few days. This has been a winter in which Buffalo has not had a snowfall exceeding 4 inches since Dec. 4, when we received 4½ inches. Our greatest snowfall occurred way back on Nov. 11, with an 8.7-inch accumulation. The season’s total is at 57 inches – 19 inches below average as of Monday.

We’ll go through the week in chronological order. After Monday’s readings not far from 50, it will get just chilly enough Monday night for some wet snow to mix in with rain. None of the snow will stick on the Niagara Frontier, though there could be a minor slushy coating at higher elevations.

In other words, there will be no weather problems for the morning commute. Tuesday will be a little cooler with a few periods of rain and drizzle, and maybe a few wet snowflakes thrown in. Periods of rain will increase in coverage Tuesday night into Wednesday, and Wednesday temps will rebound into the 40s. Both the Sunday night European/ECMWF and a high-resolution National Weather Service model depict some more wet snow mixing in Tuesday night, but most indicators point to just wet roads for Wednesday. The steadiest rain will fall later on Wednesday.

The weather gets more wintry thereafter. Once this initial vigorous area of low pressure goes by early Wednesday evening, its colder wraparound circulation will rush some modified arctic air back into our region on gusty west or west-southwest winds. The rain will mix with snow overnight and likely turn to all snow by Thursday morning.

Here is where the snowfall forecast gets trickier. Most current forecast models keep the steadier widespread/synoptic wraparound amounts manageable during Thursday. At some point later Thursday, the cold air will deepen adequately to develop organized bands of lake-effect snow. One critical question will be the precise directional orientation of those cold winds. If they originated from 250 degrees on the compass, that might allow a band of lake snow to impact the metro area late Thursday and early Thursday evening. If you look at the low level wind barbs on this model output for late Thursday afternoon, you may discern they are not coming out a due westerly direction (270 degrees) which would steer lake snow south of the Buffalo Southtowns into hilly terrain. There is a slight west-southwest direction indicated, closer to 260 or maybe 255 degrees, which would take the initial lake snow closer to the southern part of the metro area.

Almost needless to say, this kind of precise information will be changing as the week progresses, at least in small increments. But because the most recent (as of this writing) ECMWF shows a very similar west-southwest orientation, I have good confidence the initial lake band is at least unlikely to head north of Buffalo.

The greatest kink of uncertainty that has popped up in some new model runs is the continued low level west-southwest flow still showing up on Friday in the ECMWF. Such an orientation would keep lake snow closer to the southern part of the metro area than just in ski country. By Thursday night and Friday, the arctic air will have deepened enough over the 34 degree Lake Erie surface to create better developed lake snow.

By late Friday and Saturday, there is much better confidence low-level winds will veer to more northwesterly, which would steer most lake snow to ski country and the Southern Tier, with spotty, lighter amounts to the north.

The overall preliminary forecast snow totals from Thursday into Saturday in these global models clearly favor heaviest amounts focusing more on the higher terrain with much lesser amounts in the metro area and on the Niagara Frontier. Here is the ECMWF output: 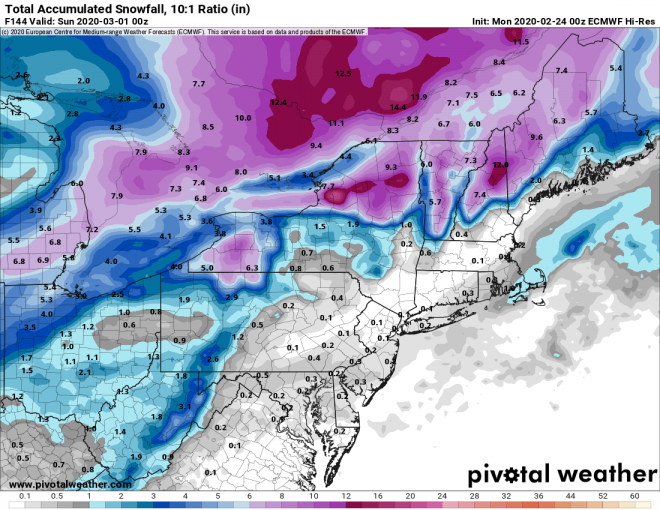 The American/GFS shows a similar tendency greatly favoring higher terrain to the south.

Finally, the Canadian/GEM model is also in good agreement on amounts and placement.

Why am I showing you all these “choices” and the low-level wind forecasts? It’s mainly a matter of expressing the uncertainty which still exists, and it’s the reason I can’t rule out the densely populated Buffalo Southtowns from receiving more significant accumulations despite those high terrain model forecasts. As of now, probabilities do favor heaviest lake snows to focus on ski country and the hilly terrain, but it’s not an open and shut case. I will update this forecast as necessary in the comments section below the article and in greater detail in the digital edition of Wednesday afternoon’s Buffalo News.

I should add the below average temperatures in the 20s will linger on both Saturday and Sunday, but a renewed moderating trend will be back by next Monday. By then, arctic air will once again be a rare commodity in the lower 48.