Winter hikes can be like walking through a Charles Burchfield painting.

Black, brown and white, with various shades of gray. And shadows, of course the shadows. Occasionally bright red streaks through the landscape. A cardinal, or maybe a hairy or downy woodpecker.

Such was the walk through the trails of Tifft Nature Preserve the second weekend of February. Three inches of snow covered the ground. The trees stood naked. Ice covered most of the ponds. A light wind rustled the dried reeds and cattails, but it was strong enough to drive the 20-degree cold through our bones.

The 264-acre preserve offers a pleasant winter stroll along its 5 miles of flat, well-marked trails.

And to think this once was a dairy farm, then an industrial area with rail lines and canals connecting factories to the Buffalo River and eventually a landfill. A group of environmentally minded citizens rescued and resuscitated this significant wildlife preserve in the 1970s and '80s, and the preserve is now a department of the Buffalo Museum of Science.

Granted, you will see old silos lurking outside the preserve and occasionally hear the whine of a truck shifting gears on nearby roads as you walk the trails.

But this is home to deer, beavers, muskrats, squirrels and an incredible number of birds and waterfowl, including a pair of osprey. The National Audubon Society considers it an “Important Bird Area,” and it is a hot spot for birding, especially during migration.

We started at the Herb & Jane Darling Education Center, to pick up a map and get a layout of the preserve. The log center overlooks Lake Kirsty, which was part of a canal system in an earlier day.

We learned at the center that a bald eagle had been spotted a week earlier on the Snakeroot Trail, which is just off the main path, so that is where we headed, hoping to see the raptor that has come back in full force to the Great Lakes. 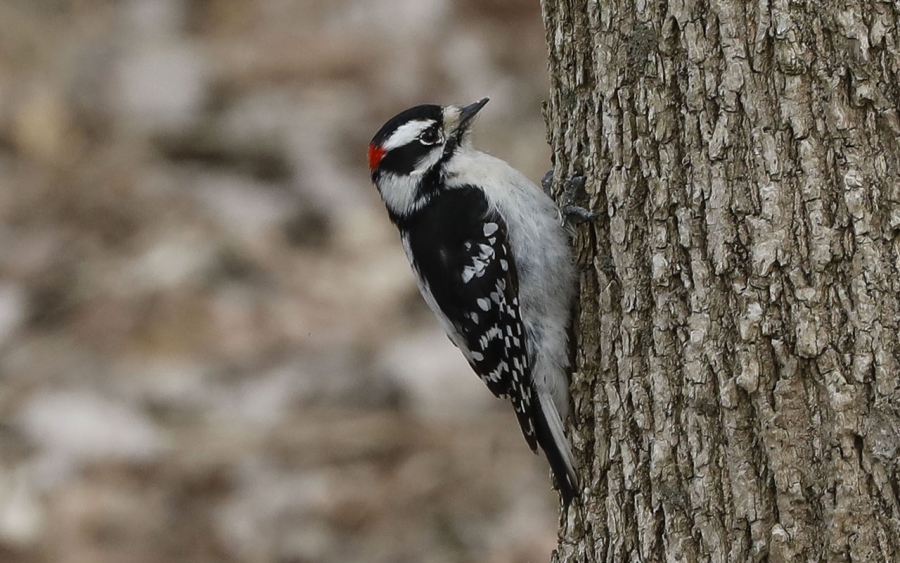 A downy woodpecker searches for a meal in the trees in Tifft Nature Preserve. (Derek Gee/Buffalo News)

Crossing the small footbridge, we made a right onto the Snakeroot with an arm of Lake Kirsty on our right. A bed of brown, dried reeds with tassel tops stood at least 15 feet tall along the trail, forming a corridor. They were impressive, but they are an invasive plant, phragmites, which choke out the native cattails. Several invasive plants – Japanese knotweed, buckthorn, honeysuckle and swallowwort – have set deep roots throughout Tifft, no doubt brought here by the industrial traffic that once bustled through this part of South Buffalo. But the preserve staff is doing its best to control them, and a 75-acre marsh is dedicated to the native cattails.

We walked the length of the .35-mile Snakeroot to its end without spotting the bald eagle, just a solitary chickadee that followed us. We then took a left on Old Tifft Street for a short distance before making another left on the Service Trail. All along the trails, dozens of trees, some young, some old, were protected at the base by wire and plastic coverings, preventing deer from eating the young shoots and the beavers from taking down the older trees.

The preserve has embarked on an ambitious tree-planting program to return eastern cottonwood, butternut, hickories, basswood, sycamore, black willow and swamp white oak. More than 2,000 native trees and shrubs were planted between 2010 and 2013. 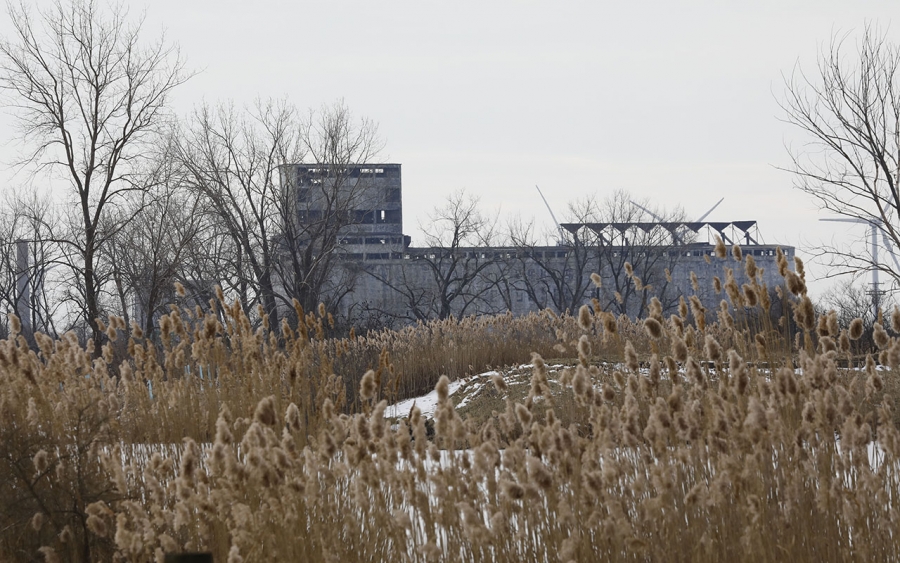 Hiking in winter can make you more attentive to the sounds – and the silence. Most birds have headed south, so you pay more attention to the occasional tweeting of the winter birds. And no bees or grasshoppers or crickets or other insects are buzzing about. The silence and stillness surround you. You hear the crunching of boots on hard-crusted snow. Occasionally, a bird chirps somewhere in the forest. You might hear a caw and look up to see a crow flying overhead.

The first right off the Service Trail took us onto the Boardwalk-Mosquito Junction trail loop, a more heavily forested area that leads to a pond.

The first observation area with blind overlooks the frozen water, where four or five wood duck boxes posted silent sentry. Another observation deck farther along the wooden boardwalk also offers views of the pond, empty now but certain to be filled with waterfowl during the coming migration.

This half-mile trail led us to the Rabbit Run East trail. Up to this point, wildlife was scarce. But once on Rabbit Run, friendly and inquisitive chickadees greeted us. We stood on the trail and watched as they hopped and jumped from branch to branch to get closer to us, cocking their heads back and forth, investigating, looking us over. I extended my hand, and they came closer and wished I had brought a handful of bird seed, as I have on previous hikes where I knew chickadees were plentiful. They will eat out of your hand.

Next came the cardinals. A couple of bright red males and a couple of yellow-brownish females. Then a single woodpecker, either hairy woodpecker or downy. I could not tell for certain. 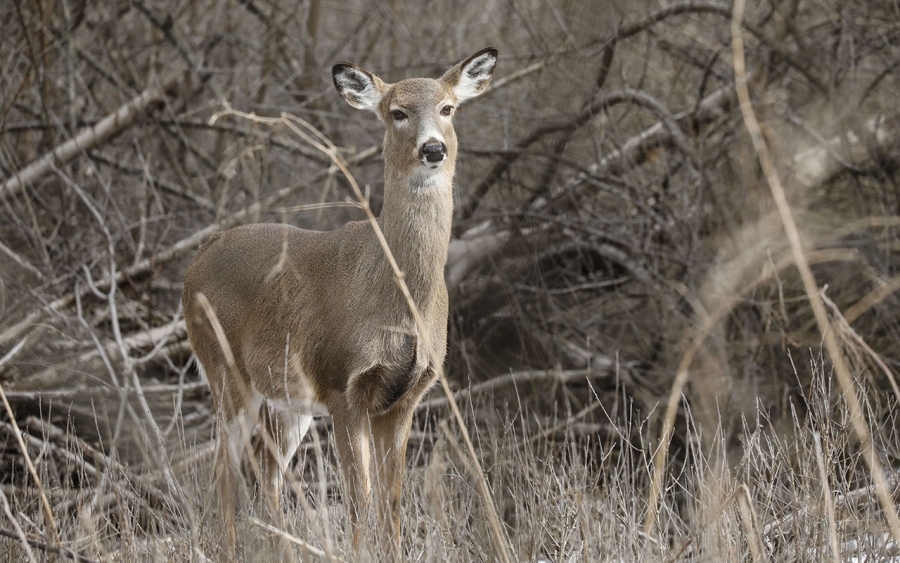 Whitetail deer forage in the brush near the trail in Tifft Nature Preserve. (Derek Gee/Buffalo News)

We continued down Rabbit Run and saw six or eight deer on the path. They stood their ground, watching us intently as we slowly approached, and didn’t bother to step off the trail until we were three or four steps away.

As we approached the lake, birds surrounded us. At least a dozen bright red male cardinals and their mates, dozens of chickadees, a yellow bellied sapsucker, a couple more downy or hairy woodpeckers, a rose-breasted grosbeak and believe it or not, four to six robins. Robins in early February in Buffalo?

We stood there in awe of this aviary menagerie on a winter afternoon.

Finally we headed back to the education center, where we confirmed that yes, those were robins. During mild winters, some do spend the winter here.

We did not see the pair of osprey, which have been nesting at Lake Kirsty since 2011. They are true snowbirds. Like many Buffalo residents, they leave in November and return in March or April.

This hike of 2.5 miles took us about two hours. We didn’t push ourselves. Just a leisurely stroll on flat trails with 3 inches of snow. We could have rented snowshoes at the center but chose not to. We encountered two other people on skis near the boardwalk of Mosquito Junction, and maybe four others hiking as we were. So it was not crowded.

This is a great place to walk through a Burchfield painting.

Worst feature: Utility line runs through preserve, other signs of nearby industry