Notes and quotes from the January Television Critics Association tour in Pasadena, Calif., about some thought-provoking shows arriving soon:

Al Pacino, the star of Amazon’s 10-episode series, “Hunters” – which premiered Friday – was blunt when asked if working on the streaming series was different than working on Martin Scorsese's more than three-hour Netflix movie "The Irishman."

“Every week or every two to three weeks, you get a new director,” Pacino in a news conference. “Shall I say more?”

Pacino has a heavy load in the opening episode of “Hunters,” playing a rabbi who leads a team of vigilantes in the New York City area who are seeking to find and kill Nazis who are planning a Fourth Reich.

Logan Lerman (“The Perks of Being a Wallflower”) plays a teenager who witnessed a Nazi murder his grandmother. He joins the hunters by the end of episode one.

David Weil said he created the series five years ago. Lerman's character appears to be modeled on his superhero fantasy.

“My grandmother was a Holocaust survivor,” Weil explained in the press conference. “She would tell me stories about her time during the war. And as a young kid, 5, 6 years old hearing those stories, they felt like the stuff of comic books and superheroes. And as I got older, I struggled with that feeling of birthright. What was my responsibility now to continue her story? 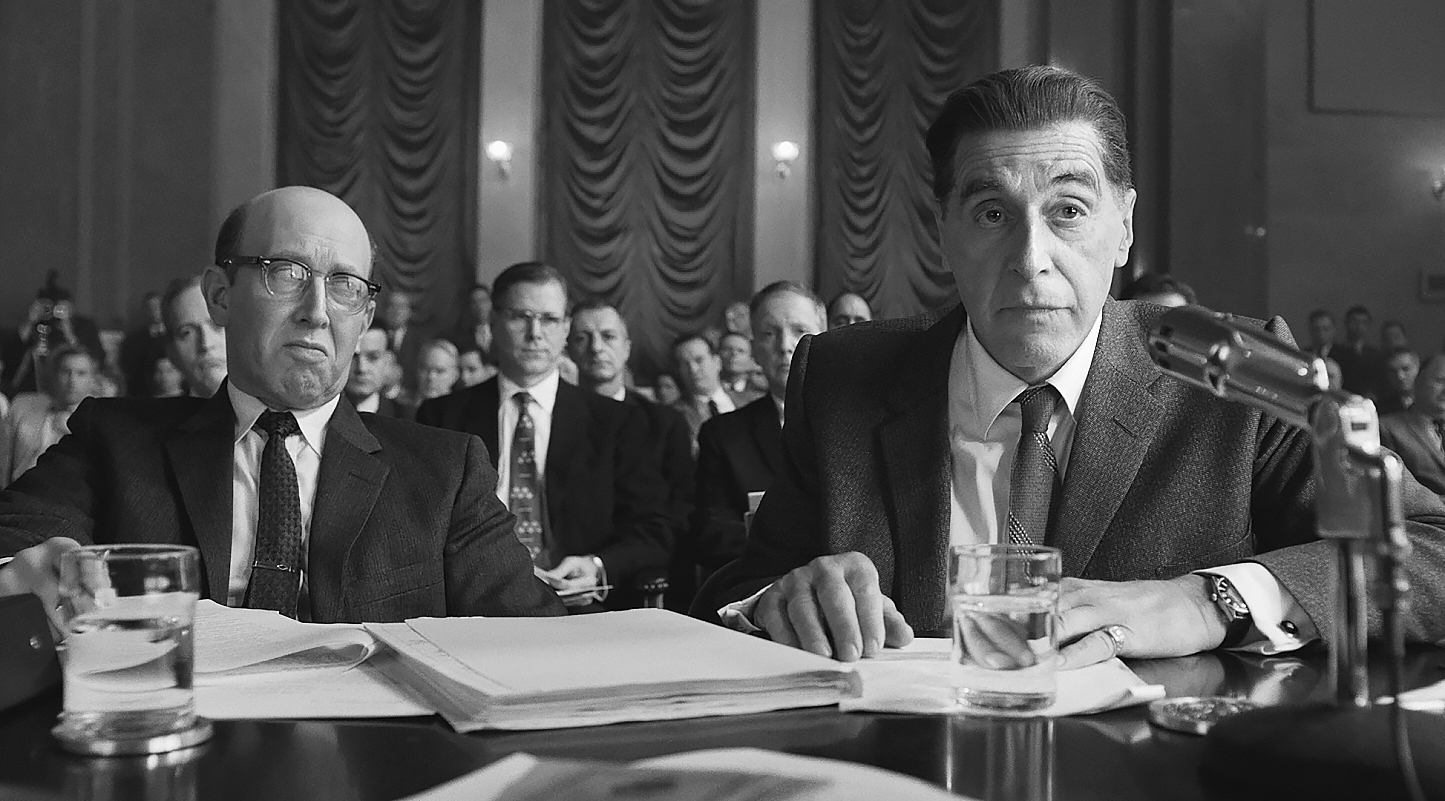 “So many Holocaust survivors are no longer with us and that community is growing smaller and smaller by the year. And so for me this was a love letter to my grandmother. It was a quest to don that vigilante cape in the face of rising anti-Semitism in the world, racism, xenophobia. It was a desire to shed light on hidden crimes and hidden truths. And it was also kind of a desire to create a sense of catharsis and wish fulfillment for a young Jewish kid growing up on Long Island who wanted to see superheroes who looked like him on screen, who engaged with the perpetration against the Jewish people in a way that felt unique and special, in a way that we reclaimed power.”

Weil described the series as an allegorical tale.

“It’s to draw the parallels between the '30s and '40s in Europe, '70s in New York, in America at the time, especially what’s going on today,” he said. “We’re facing an epidemic of anti-Semitism, racism, xenophobia, the likes of which we haven’t seen in decades. And so this show is really a question. It’s what do you do? And for this show about a group of vigilantes who try and reclaim the power, the question that the show poses is, if you hunt monsters, do you risk becoming a monster yourself? And I think that’s a very timely idea and question that we should all be asking ourselves in this day and age.”

The best speech of the press tour came from Zoe Kazan, one of the stars of HBO’s “The Plot Against America.” The miniseries is based on a Philip Roth novel that imagines Charles Lindbergh as a president who turns the U.S. toward fascism. It premieres March 16.

Zoe is the granddaughter of the late controversial film director Elia Kazan (“Gentleman’s Agreement,” “On the Waterfront”), who testified before the House Committee on Un-American Activities in 1952. He named eight friends who were members of the American Communist Party with him in the 1930s. He was given the Lifetime Achievement Award during the 1999 Oscars amid protests about his testimony that led industry people to be blacklisted and unable to work in Hollywood.

After a critic told Zoe Kazan that he didn’t want to bring up hard times for her, she quickly reacted before he asked a question.

“You’re not bringing up hard times for me,” she said. “You’re bringing up hard times for our country. ... My grandfather did an adaptation of a book by John Steinbeck called ‘East of Eden.’ And in that book, there is a discussion of a Hebrew word in translation in the Cain and Abel story. And the word – and I’m going to butcher it because I’m not Jewish, which is a whole other question if you want to talk about that – is ‘timshel.’ And Steinbeck translates it as ‘Thou mayest.’  And the question at hand is that God says to Cain, in some translations, ‘You can triumph over sin,’ and in some translations he says, ‘You will triumph over sin.’ And Lee, this character in the book, does a kind of deep-dive into the actual word in Hebrew and what he comes up with is ‘Thou mayest.’ Thou mayest triumph over sin, but it’s in the hands of the next generation, that it’s a choice.

“I have not wanted to weigh in on my family’s political history, partially because of the other people it involves in my family who have prized their privacy over a public life. So, I’m not going to go into it. But I will say that I thought a lot about how the history of our country affected my family’s history, what it meant for my grandfather as an immigrant to this country to have his Americanness tested and the choice that he made from that. And I thought a lot about my own choices that I’ve made, the way that I choose to live my life. I think thou mayest choose a different life, and I think that the reason that Steinbeck put that in his book about the foundation of the West in this country is that it’s also about Americans choosing to recognize who they have been. Cain did kill his brother. But also recognize that they may choose a different future for themselves. I think it’s meaningful in the book that it comes out of the mouth of an immigrant. So those were the things that were on my mind as I worked on this. It was a profound experience for me working on this, personally, politically, artistically. And I think that’s all I have to say about that.  Thank you.”

David Simon, the executive producer and writer of “The Plot Against America,” was extremely impressed by the answer, which practically stunned critics to silence.

“Can I just say I’ve been coming to TCAs now for about a decade,” said Simon, best known for “The Wire.”  "That was the best answer to a question. That was so cool. That had linguistics, that had like film history. That was gorgeous.”

I have come to TCAs for almost four decades and that was the best speech I’ve heard, too.

The fifth season of one of my favorite series, AMC’s “Better Call Saul,” arrives with back-to-back episodes Sunday and Monday. The “Breaking Bad” prequel will end with a sixth season that is currently being filmed.

At the end of six seasons it will have 63 episodes, which is one more than “Breaking Bad” had in seven seasons.

“That’s exactly what we wanted and that’s what we hoped for in our wildest dreams,” said Peter Gould, the show's co-creator and showrunner.

He added the writers didn’t have much of an idea how to end the series when it began.

“For the first, I’d say, four seasons, it was very foggy,” he told critics. “Then during the breaking of Season 5 … I think the fog started to lift a little bit. The headlights started to reach that much further down the road. We started to see where we think it ends, and I have to say none of it is what I would’ve expected when we started … but the end of it, I think, when this season is over, I think you’ll have a better understanding of kind of where this is all going.”

In the opening episode of the fifth season, Jimmy McGill (Bob Odenkirk) practices law as “Saul Goodman,” his character in “Breaking Bad.”

Kumail Nanjiani, a creator of the moving “Little America,” an Apple Plus anthology about the journeys of immigrants, was told by a critic describing himself as a recent émigré that he observed Boise, Idaho residents were more welcoming to refugees than to Californians moving there.

“Well, I think Boise has it right; I’d rather welcome a bunch of refugees than Californians,” he cracked. “Does anyone want to answer it seriously?”

Later, Nanjiani explained his feelings after arriving in the United States.

“I grew up in Pakistan, and my America that I knew was from movies, which is L.A., and New York,” he explained. “I moved to Iowa, and I remember being like, ‘oh, you guys did not advertise this part of the map.’

“It’s true I think pop culture usually portrays very specific centers, so that was also exciting … to be able to show (in “Little America”), somewhat ironically, more of America than people usually see in movies and TV shows.”