Sally Gower took the same route a decade ago, after she left a 30-year career as a pharmaceutical sales rep.

“I always felt that people were more apt to go to a medicine or to take a pill than to make lifestyle changes to improve their health,” Gower said.

The two women have since discovered that food can complement medicine, helping prevent and address obesity, diabetes, some forms of cancer, heart disease and more.

They will share what they’ve learned starting March 3 in Her Kitchen, a six-month, plant-based cooking class and wellness series that will run for three hours the first Tuesday evening of each month at Ashker’s in Black Rock. The cost is $395 and includes a mocktail hour and interactive cooking demonstration, followed by a meal. Preregister at hersanctuarybuffalo.com.

This will be the first of what four organizers hope will become more plant-based collaborations. Gower, owner of Eat Well Buffalo,  Morreale and her daughter, Ciara, owners of Her Story Boutique, and Sarah Nasca, co-owner of Askher’s juice cafes, lead the joint effort.

“We're going to be so much more than just cooking with this and other projects, because wellness is all about the mind, the body and the soul,” said Morreale, who along with Gower this week talked about what drives their passion for mostly plant-based eating.

Q: Who should come to a series like this?

Morreale: Somebody wanting to really step into this kind of lifestyle and ready to learn more. They probably have already started doing it but they're struggling to find recipes, struggling with what to make for their families. You can do this and the foods can be really good and delicious. We're not basing this all around women, either, although the boutique is related to them. We’ve had a man reach out to us, a structural engineer. He grows his own trees and he has his own garden. He and his girlfriend want to step into this lifestyle and take it to the next level.

Gower: The American Diabetes and Heart associations and the American Cancer Society are making these recommendations. So many health organizations are now saying eat less processed meat, more fruits and veggies. What we hope to do is provide a path for them. People feel they’re going to deprive themselves of eating the stuff they really love. Well, no. It’s really important that is a positive experience for them. There are so many more options out there that are delicious and wonderful and so healthy. 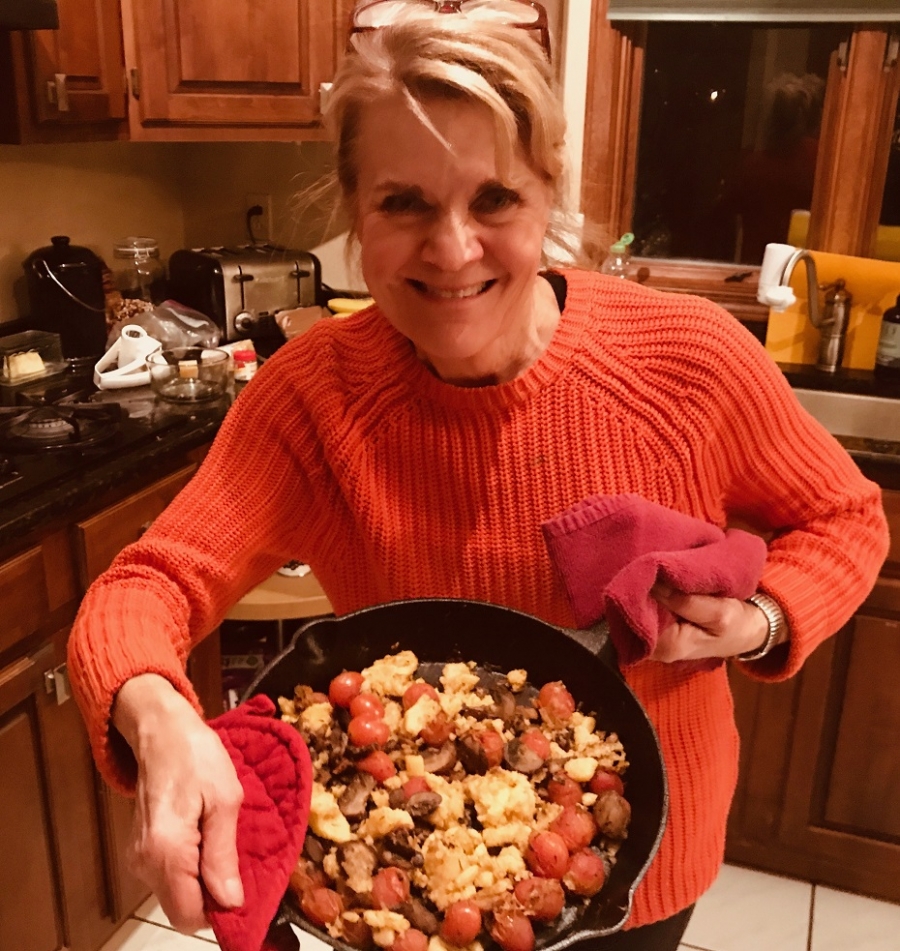 "Half your plate during your meals, and all your snacks, should be fruits and veggies," says Sally Gower, owner of Eat Well Buffalo, shown with a polenta, tomato and mushroom skillet dish she made. (Photo courtesy of Eat Well Buffalo)

Q: Sally, you’re a pescatarian who eats fish a couple times a week but otherwise plant-based foods. What’s that like?

Gower: It's so important to individualize what we eat because what works for me is not necessarily going to work for someone else. I know how I feel, the energy I have, how I sleep, all those things that make up the important pieces of your life. I get those by eating the way I do. I never eat red meat. I don't eat chicken or poultry.

My sister says, “I know you're gonna live to be 100.” It’s not that important how long I live but how well I live.

There are movements like the flexitarian and reducetarian movements. Look at Meatless Mondays. It’s trying to get people to be aware of not only the health of animals and the environmental issues … but put power back into our hands.

Q: What other steps and resources would you recommend?

Morreale: If people are going to be getting some kind of meat, make sure they’re getting it from a clean source. Check the label to make sure there's a Certified Humane seal. It's the gold standard in farming.

Gower: First, increase your water intake and start to eat more fruits and vegetables. If you're going to have meat, that piece should be no bigger than a deck of cards. Half your plate during your meals, and all your snacks, should be fruits and veggies. If you can start with that, that's huge.

You also want to move away from the soda pop and away from processed foods. It's impossible sometimes to give them up totally, but just decreasing them is important. If you just take baby steps, that’s good. I'm a strong believer this doesn't happen overnight.

“Blue Zones” is a wonderful reference. It’s written by Dan Buettner. He was a journalist with National Geographic. He's traveled the world and identified five zones where people that have lived the longest, so many of them over 100. He took the characteristics of these people and tried to see where the zones overlap and it's things like being plant-based, where there’s lots of family socializing, drinking more water, more tea, those kinds of things.

Her Story: A place where women feel empowered