Beer could be coming to Mighty Taco, but even though some Western New Yorkers may swoon at the thought of washing down a Mighty with a pint, others prefer to grab and go.

“It’s a brilliant idea, but I don’t know if I’m ever at Mighty that long to drink a beer. Having beer available is not a bad thing, but it won’t draw me to Mighty," said Jacob Fossitt, 25, who lives on the West Side.

Fossitt carried his Mighty in a bag as he took a quick break from his carpentry job to run in to Mighty Taco's West Chippewa Street location.

The locally owned fast-food chain, known for its quirky slogans and ad campaigns, has taken the first step in obtaining a liquor license from the State Liquor Authority for 19 of its 21 local restaurants, Mighty Taco CEO Russell Jasulevich confirmed this week.

“What’s better than a burrito and beer?” asked Jasulevich. “A taco and beer. It adds another dimension to our business.”

The liquor license would also allow the sale of wine and hard cider, said Jasulevich.

A fast-food restaurant seeking a liquor license is not common in Western New York, said William Crowley, an SLA spokesman.

Taco Bell, a national chain of fast food Mexican-themed restaurants based in Irvine, Calif., operates more than a dozen locations in the Buffalo area. While none of the area locations serve alcohol, Taco Bell offers alcoholic beverages at several Cantina locations in cities throughout the country including New York City, Chicago and Alexandria, Va., said James Ball, regional manager.

Ball was not aware of any plans to introduce alcoholic beverages here.

“We’re having a hard time staffing restaurants today,” Ball said. “I don’t want the hassle of fake ID and police. I want to serve you a hot burrito or taco and call it a day.”

Taco Bell’s Cantina locations in New York serve slush cocktails made with fermented vodka and rum and agave wine, posted VinePair, a digital content company offering insight into the beverage entertainment industry. Fermented alcohol, which is not distilled, contains a lower alcohol content, said VinePair in a post from August 2019.

Meanwhile, Mighty Taco's plan to serve alcohol is gaining acceptance in some suburbs.

In East Aurora, the Village Board approved a preliminary waiver that may clear the way for the Mighty Taco on Grey Street to serve beer, wine and hard cider.

“Are we now going to be expected to pass a liquor license for McDonald’s, Tim Hortons or other fast-food restaurants?” he asked.

Mighty Taco started with a single location on Hertel Avenue in 1973. The chain now has 21 locations in the Buffalo area. In 2012, it expanded to the Rochester area, but had closed both locations as well as a quick-service, health food location by 2018.

Two locations – 727 Maple Road in Amherst and 1039 McKinley Parkway in South Buffalo – will not be seeking a license because both are located within convenience stores where beer is sold, Jasulevich said. 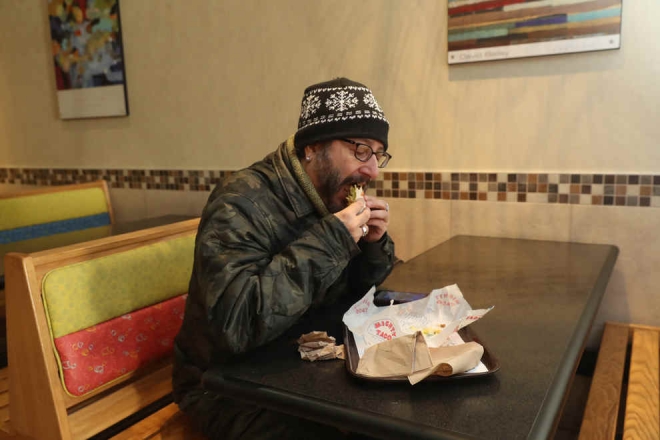 No decisions have been made as to what brands of beer, wine and hard cider will be offered, Jasulevich said.

Christopher McCoy, 50, enjoying his lunch Friday, said he does not drink alcohol, but had no objection to the idea.

“Having one drink with your meal is certainly not a bad thing if that’s what a person chooses to do," he said. "It’s up to people to drink responsibly.”

Others said the idea doesn't seem to fit with the idea of fast food.

“I wouldn’t get beer with my tacos,” said Teri Syracuse, 50, of Hamburg. “You’re usually on the go with Mighty Taco. It’s not a sit down and enjoy the meal kind of place. Quick. Cheap. In and out.”

“This is usually a fast stop with my kids. You wouldn’t get beer at the drive-thru,” said Sally Venditti, 43, of Lake View. “Maybe it will catch on here, you never know.”