Up north in Canada and Greenland, snow helps mold igloos on tundra-like terrain.

Limina is referring to the "igloos" at the two Tappo restaurants. These igloos are not made of snow, but look more like a playground dome climber with a plastic cover, sheltering guests from chilly winds and brisk temperatures. The clear domed enclosures are large enough to accommodate up to eight adults and a table and chairs for the ultimate outdoor dining experience – in the winter. At night, they are illuminated by strings of lights for a striking glow.

The igloos are found on the rooftop at Tappo on Ellicott Street downtown and outside Tappo Pizza on Chandler Street. Similar igloos overlook the Ice at Canalside where friends and families can sip hot cocoa and watch skaters and other winter activities.

Roughly seven feet tall with enough room for the average person to walk in, the igloos have small heaters to keep guests warm in the cold while utilizing spaces, like Tappo's rooftop patio, that would be unused in winter. 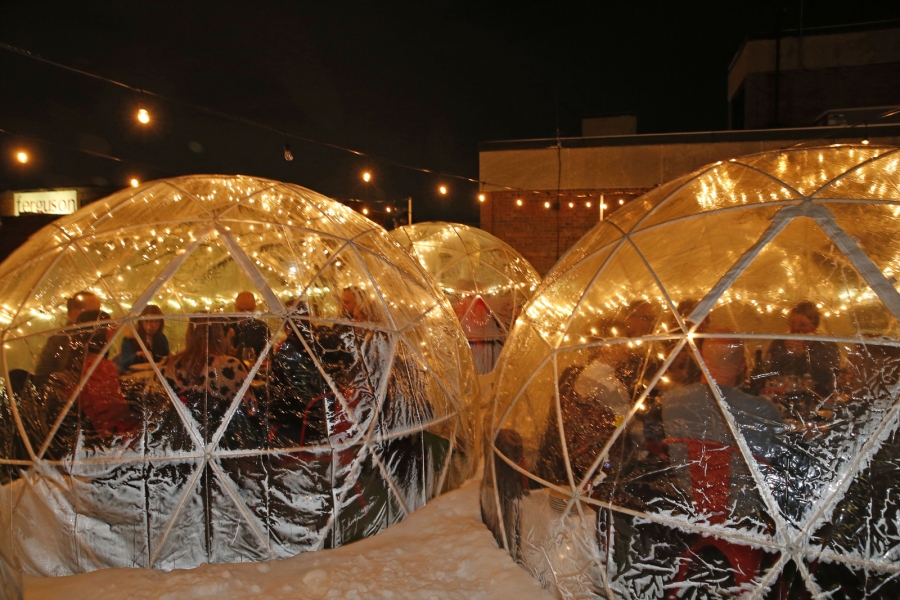 Snow surrounding the igloos on the rooftop at Tappo Restaurant downtown presents a picturesque winter setting, while heaters warm the diners inside. (Robert Kirkham/Buffalo News)

“You can dress in your fancy winter clothes, just without the need for a parka,” Limina said.

“People think that it’s going to be cold. It never is, but that’s kind of the fun of it, too. You’re doing something adventurous, it’s different but you’re not going to be chilly in here,” he added.

Reservations to nestle inside the Buffalo domes cost anywhere from $149 to $600 for a group of up to eight people and include various food and drink choices. (The cost averages out from $18.62 to $75 per person in a group of eight.)

Igloos have popped up around the country in recent years, including in Rochester and over the border in Niagara Falls, Ont. In January, The New York Times surveyed the “fake igloo wars” in the city where one establishment got more than 1,000 reservations at the start of its igloo real estate business.

“You’re right next to an ice rink so you’re going to feel those elements,” Gress said of our cold weather. “With the igloos, it’s like a snowglobe experience.”

Judi Donner and her friends had heard about the igloos a while back and thought it was something they would enjoy. When it was time for a belated birthday dinner celebration for Donner, the women decided it would be a great time to try it out. 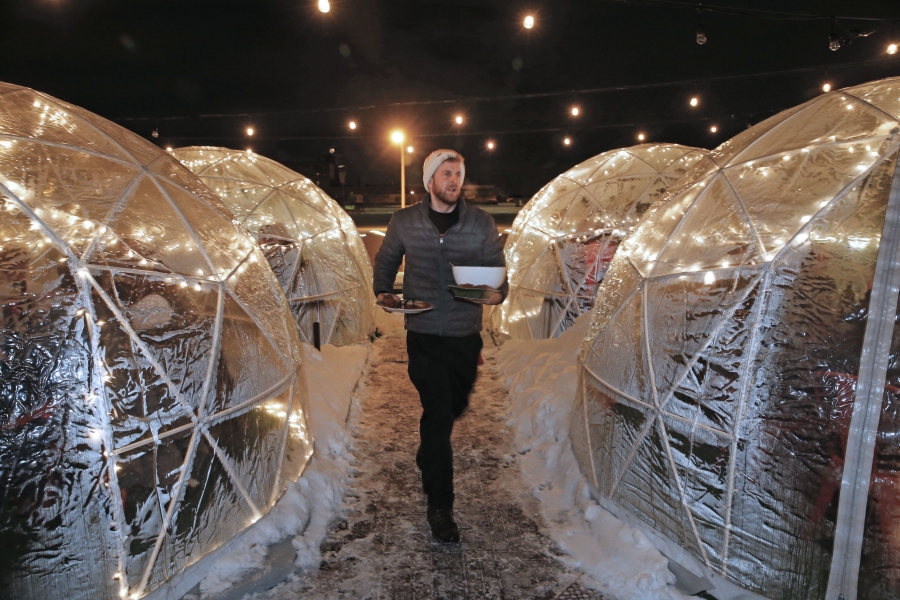 "My group of friends like to do different things and we thought we should do the igloo dinner," she said. "We had so much fun. The food was delicious. The service was great."

Wanting the full effect, Donner said they even hoped it would snow – and it did. "It was cold. It was snowy and that added to it. But it was comfortable. The Electric Tower was lit and you could see the city skyline."

Tappo’s six igloos each include a large table with plenty of room for diners to kick back in their chairs. . Although I feared I would hit the igloo’s plastic wall as I leaned back, Tappo’s arrangement offers ample room for diners to relax.

The view of the Electric Tower is a straight shot above Tappo’s Ellicott Street rooftop and the igloo was clear enough to take in the structure, much like looking out of a car window.

At Canalside, the igloos have plush, waterproof furniture where families can relax as attendants bring in bottomless hot chocolate. The interior also includes sports pennants that reflect Canalside’s past life as the site of Memorial Auditorium. Igloo-goers get a straight view of ice skaters as they circle the rink. Buffalo Waterfront’s igloo packages include skates, which you can plop on at any time and leave your shelter to hit the ice. 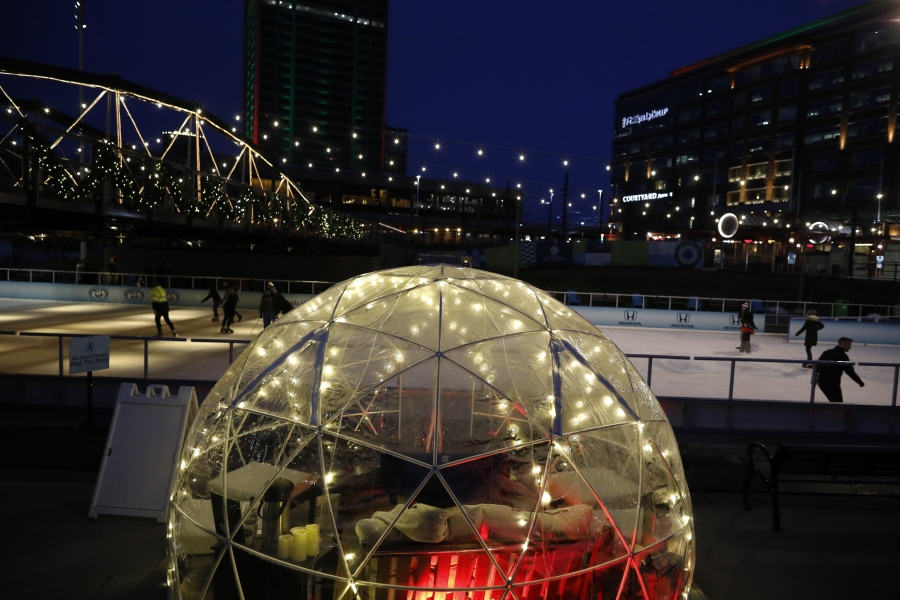 The furnished elements of the Canalside igloos, which are very much like a patio setting, are just the right accommodation for friends and families who can bring food inside from the nearby Snack Shack and Lowbridge Cafe. The igloos are one way Buffalo Waterfront is bringing more warmth to the space, Gress said, as cold weather-friendly activities like curling and ice bowling surround the small huts.

In the first few weeks after setting up Canalside’s igloos, which debuted this winter, Gress said even 50 to 60 mph wind gusts couldn’t bring them down.

“It’s impressive. But we tried to build these structures, build the floor and everything, by figuring out how to secure them the best way. They do really hold up well in the elements,” Gress said.

The enclosures bring more privacy to diners or ice skaters seeking escapes while still enjoying lively places in the city. This feature works well while dining at Tappo, as the igloo’s covering wraps friends and family together for meals.

“What I personally really like about this is you’re with the people you’re with, you’re not with anyone else, no one is eavesdropping,” Limina said.

Donner and her friends would agree that it's a great way to talk, laugh and spend time together.

"We were laughing so loud. It was fun. I would totally do it again," Donner said, adding she would tell those who are hesitant just to try it as something different. "People will say 'I don't know – it's cold and it's outside.' But  you will be surprised how much fun it is. It will knock your socks off."

Packages are for 90 minutes. Guests should arrive 10 to 15 minutes before reservation time. Season continues to about March 1.

Package: $149 includes ice skate rental and ice rink usage for up to eight people, one round of alcoholic/non-alcoholic beverages and complimentary hot cocoa. For reservations, call 436-7100 or visit buffalowaterfront.com/activities/igloos-at-the-ice

Packages are for two hours.

Tappo, 338 Ellicott St. For $375-$600 includes two bottles of wine, one warm beverage, salad, two entrees, dessert platters. Packages at $500 and $600 also include after-dinner drink options and entrees. Entrees include orecchiette pasta, roasted pork ragu with pasta. A prime rib steak is part of the $600 option. Split between eight people, cost is about $46 to $75 per person. For reservations, visit tappoitalian.com/igloo-rentals-2019-2020 or email elyse@tapporestaurantgroup.com.