Mitch Reynolds had the conversation as a teenager, high above the field in a lift at St. John Fisher College. He was watching the Buffalo Bills at a summertime practice alongside his grandfather, Henry Kunttu, who spent 40 years in charge of filming the team.

Reynolds had been helping out at Bills practices since he was a little kid. He loved everything about the atmosphere, and he told Kunttu he hoped to emulate the older man's career.

A football life was fine, Kunttu responded, but forget about video.

Kunttu was talking about the way top executives in the National Football League often had penthouse offices that looked out on the field. He compared that with his own career, how there was a time when he might not sleep for two days in a row while hustling to put together whatever film the coaches needed.

If his grandson wanted the NFL, Kunttu reasoned, better days awaited him if he shot even higher.

Reynolds listened. His parents, Matt and Lisa, raised him in Elma. He played football at Iroquois High School and earned degrees from SUNY Cortland and Canisius College. His football journey carried him from an internship with the Bills – he was laid off following the lockout of 2011 – to another internship in Kansas City, where he eventually was named director of team operations for the Chiefs.

The reward will soon be a Super Bowl championship ring, which Reynolds describes “as the biggest goal I had.” He recalls just how close his grandfather came with the Bills, and he knows his uncle, Erik Kunttu – a longtime video and film director with Syracuse University, the Indianapolis Colts and now the Detroit Lions – is still waiting to be part of a team that wins it all. 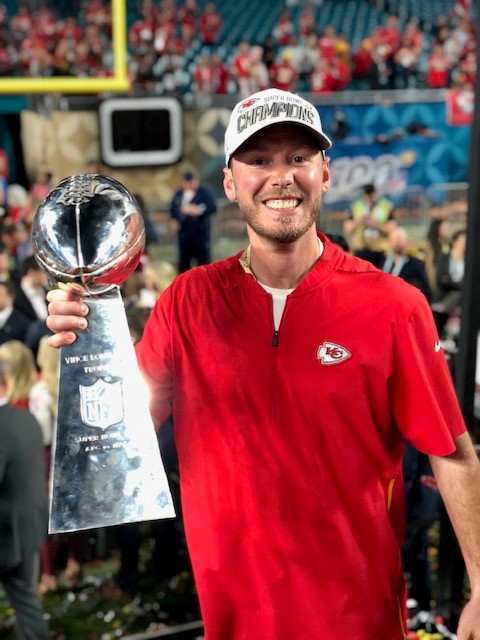 Amid the euphoria in Miami after the Chiefs knocked off the San Francisco 49ers, Reynolds had a chance to hold the Vince Lombardi Trophy “on both the stage and the field.” Back in Kansas City, Reynolds rode along in a championship parade he was involved in organizing.

“I still can’t believe it’s real,” said Reynolds, 32, looking forward to the day when he receives his ring and can show it to his grandfather. Kunttu keeps telling him he already has four Super Bowl rings, since the Bills and their staff received them following the Super Bowls they lost in the early 1990s.

Kunttu laughed. "The difference is," he said, "he has a real one."

He praised his grandson's work ethic and compassion. He can still remember Reynolds as a kid doing errands along the Bills sidelines, a little guy who once made the mistake of chasing a football that bounded into the middle of a full-blown 9-on-7 drill. Reynolds avoided ending up on the bottom only because one player “dragged him back by the heels” after seeing what was coming.

While Reynolds speaks of the ring “as getting one for the family,” Kunttu's original goals never involved football. After graduating from New Haven University in Connecticut, he took a job with Academy-McLarty Productions, a company that did animation, commercials and industrial filmmaking in Buffalo.

He arrived in 1966, a few years before the Bills hired that company to handle game film. Kunttu received the assignment. For a while, without an adequate dark room, he routinely drove to Cleveland to develop the film. Sensing an opportunity, he spoke to then-Coach Lou Saban and worked out a deal.

For 15 years, until the team hired Kunttu full-time, he served as a contractor, handling game film for the staff and setting up his own darkroom. During the season, before the great advances in video, the first part of the week became one long and sleepless shift, with the coaches needing their film, and fast. That on-the-job education led to other clients, including the old Buffalo Braves of the National Basketball Association.

Before he retired about a decade ago from the Bills, Kunttu was there to capture a tumultuous sequence of franchise ups and downs. As a measure of how much he appreciates his grandson's ring, Kunttu was on the sidelines in early 1991 as Scott Norwood’s Super Bowl kick angled just wide and the Bills lost to the New York Giants by a fingernail.

It helped drive home a lesson. Nothing is guaranteed.

“I’m so excited for him,” he said of Reynolds. “I told him he got lucky. A lot of guys, a lot of great guys, have been around for years and never know what it’s like to be on top of the hill.”

Kunttu still feels an ache when he thinks of the Bills teams of the 1990s and all they accomplished. As Reynolds is learning now, the booby prize for going to the Super Bowl is that nothing ever stops in the NFL. The teams that make it to the final game are already a step or two behind the rest of the league in preparing for the next season.

To go back twice in a row, Kunttu said, is an achievement.

To go four straight times? “I don’t think anyone else ever will,” he said. 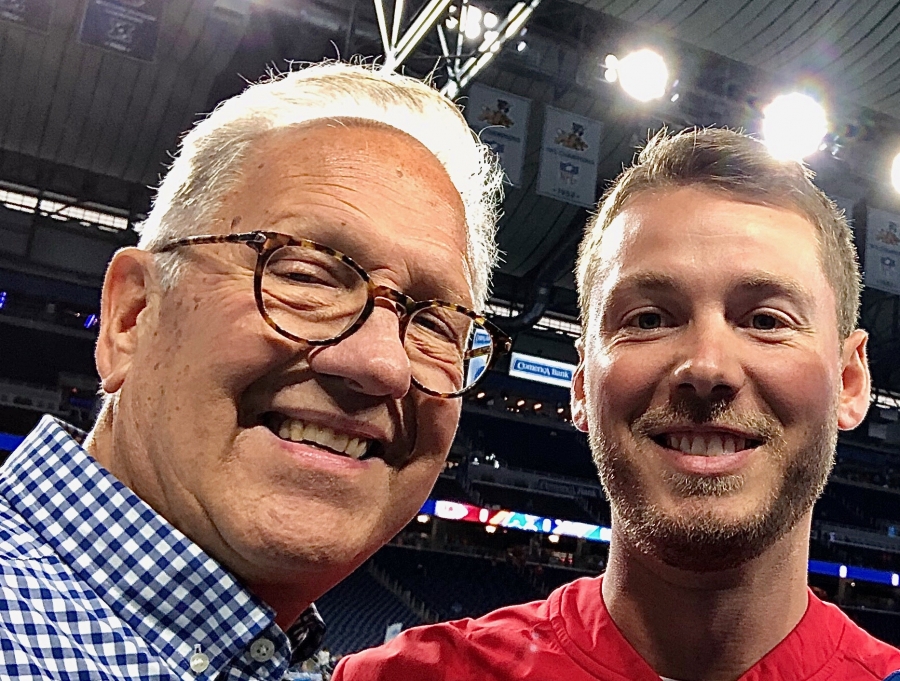 Henry Kunttu, retired video and film director with the Buffalo Bills, with his grandson Mitch. (Photo courtesy of Henry Kunttu)

Reynolds has only vague memories of those years. What he remembers of the mid-1990s is wondering why his Southtowns neighbors abruptly stopped having the big Super Bowl parties they held every winter, an understanding he arrived at soon enough.

His duties with the Chiefs - twice, he has been named NFL travel director of the year - involve a deluge of everything. That means “when the free agents come in and where the rookies go” and “what we eat and where we eat.” It includes where the players stay and how they get back and forth from road games, all things you had better do exactly right – because if you foul up, the entire operation suffers.

One gift of the job, he said, is his ability to verify that Andy Reid, the Kansas City head coach who won his first Super Bowl, is not only a great coach but a deeply empathetic person.

“It’s the way he treats people,” Reynolds said. “It’s people first, employees later.” As operations director, Reynolds interacts with Reid all the time. Their relationship is warm and close. They are both often working in the wee hours of the morning, and Reynolds recalls a moment not long ago when the Chiefs were on the road and Reynolds was working through a problem in his life.

There was a knock on the door. It was Reid, there to listen and to help. 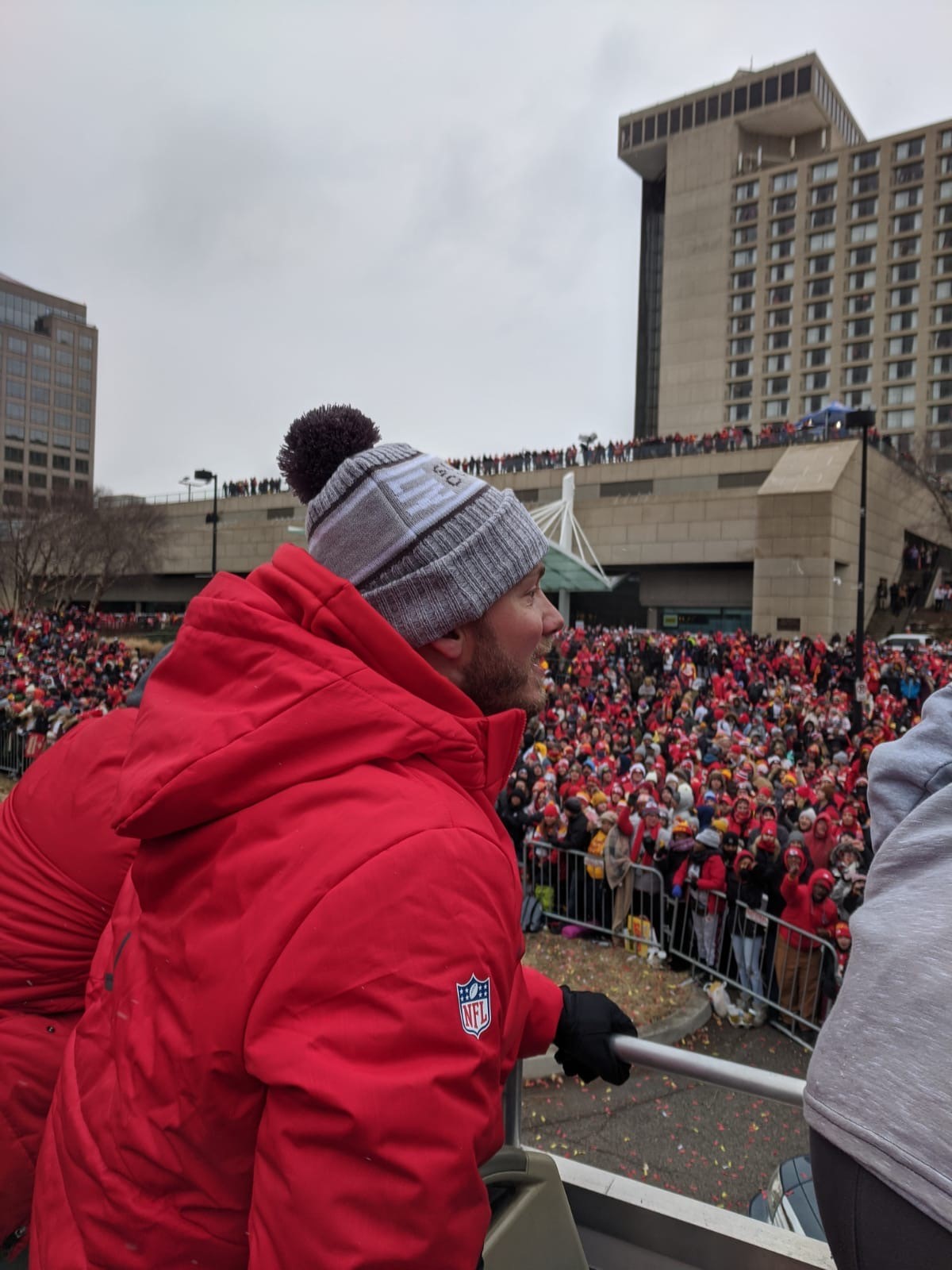 Reynolds, who has two young children, Maya and Jack, with his wife Diana, said that Reid – understanding how a football organization rises on a legion of people doing everyday tasks – is concerned about the entire staff. After the Super Bowl, amid the chaos on the field, Reid quickly offered an emotional hug to Reynolds, who will soon receive his ring.

As for Kunttu, Reynolds does not forget his grandfather's advice. The kid raised around the NFL now has plenty of experience in the way that a team runs. He dreams of someday serving as a general manager, one of the ultimate jobs involving a glass window.

He still has plenty of family and close friends in Western New York, where he will always have a soft spot for the Bills. Reynolds likes what Brandon Beane and Sean McDermott have done with the team, and he is keenly aware of the regional hunger for a championship season. Reynolds understands his grandfather's mixture of wistfulness and joy at his Super Bowl success, and he hopes the entire community eventually shares in the jubilation to which he finally bears witness.

“If our parade was crazy,” Reynolds said, “imagine what it will be like someday in Buffalo."