The developer behind the controversial Queen City Landing residential tower on the Outer Harbor is doubling-down on his bet, proposing two more six-story apartment buildings and a cluster of 32 townhouses on the rest of the peninsula that juts into the water.

Gerald Buchheit, whose pending proposal for a 20-story building is still mired in controversy, now says he wants to add two more phases to the project, located at 975 Fuhrmann Blvd.

His concept would ultimately add another 178 apartments – on top of the 206 he already plans in the first phase – along with additional restaurants, terraces and parking, according to documents that Buchheit has submitted to the city.

That would push the total cost of his development to $180 million, and extend the duration to spring 2032 – making it one of the biggest and longest projects in the region. He already demolished the former Freezer Queen structure on the site, cleared the land, and spent millions of dollars on an environmental cleanup.

"I bought a contaminated, abandoned industrial waterfront site with the vision for creating a signature waterfront development," Buchheit said. "Our community deserves more opportunities on our Outer Harbor, which is one of the jewels of Western New York."

Buchheit knows he faces an uphill battle against environmentalists and other opponents. Anticipating those objections, he's also proposing a zone of 2.5 acres for "ecological restoration and public access waterfront," with boardwalks, viewing platforms, canoe and kayak launches and fishing areas. That would be completed first, expected by 2023 or 2024, and would allow a "return to a more naturalized state" for that land. 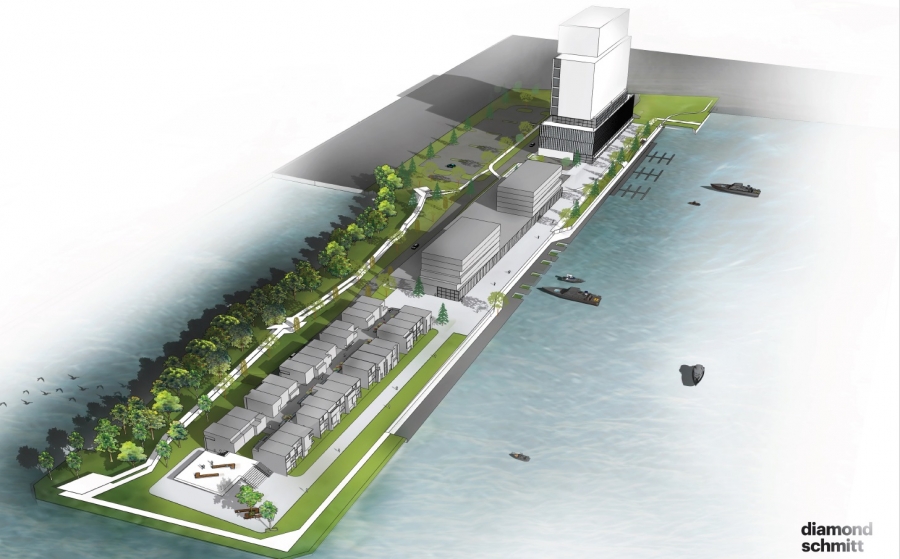 That's likely to be of little comfort to his critics and project opponents, who have long said they want the entire Outer Harbor site to be left open to nature, for the public to enjoy, with little or no development. They're already mobilized against the first phase of development – now being reviewed by city officials – and they've previously shown a willingness to go to court to challenge Buchheit's plans.

Environmental and land-use attorney Arthur Giacalone, who has represented clients in prior litigation, said the proposal would require a "hard look" and detailed environmental review to examine the impact on the coastline, traffic, waterfront aesthetics, the nearby parks and marinas and birds. He argued that residents would be isolated from the rest of the city and "the necessities of everyday life," and suggested that Buchheit is just "pretending to have a plan" because he needed to satisfy the city.

"The Queen City Landing parcel is an unsafe and unrealistic site for a residential development," Giacalone said. "We have all seen the impact of recent storms and seiches on this stretch of Buffalo’s Outer Harbor."

Buchheit said he doesn't object to the criticism, even after years of fighting to get his earlier 23-story proposal approved, only to see it face two years of litigation and further delays. But he also said the complaints are "virtually identical" to those that were ultimately dismissed by a court after the city's Planning Board and Common Council approved his project in 2016. He and the city ultimately won those fights.

He and his attorneys also stress that there are only three sites on the entire Outer Harbor – totaling 72 acres – that are zoned for residential or commercial use, and therefore open for the kind of development he proposes. His peninsula is one of them, although it's still governed by the Green Code.

And contrary to what many people expected in the last few years, Buchheit said he won't give up.

"We, as a community, cannot let habitual critics and naysayers continually stifle, delay and derail progress and investment," he said. "I have had plenty of reasons to throw up my hands and walk away, and plenty of others probably would have walked away. I won’t." 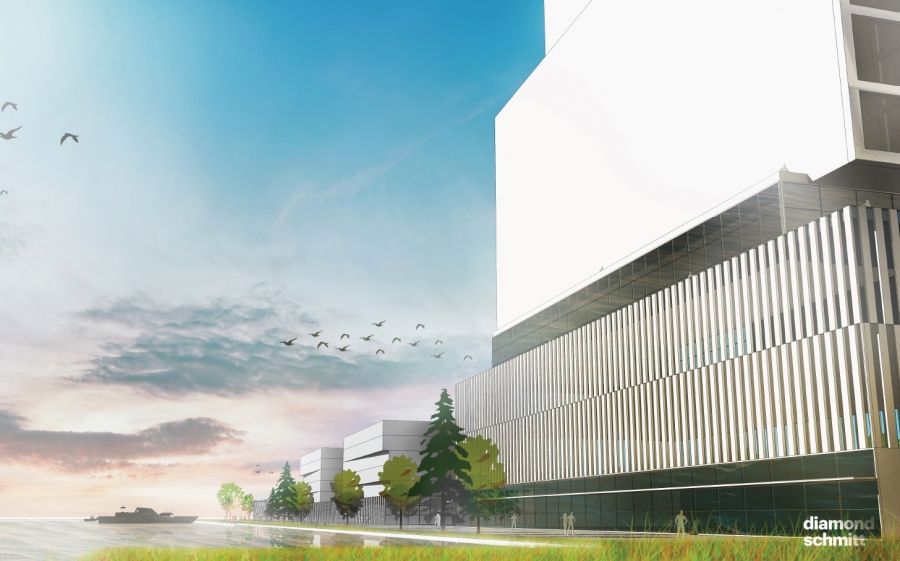 Buchheit's latest submission to the city is not a formal site plan or land-use application, but is rather part of the revised planned-unit development request for the pending Queen City Landing tower. That is, the proposals for the future "are just conceptual now," and could change, said Buchheit spokesman Phil Pantano.

In seeking approval for that first phase, the developer had asked the Common Council to designate the entire 20-acre property as a single coordinated plan under a predetermined set of zoning rules that would allow certain types of development in the future. Since the tower takes up only 6.8 acres of the property, the city asked Buchheit to lay out his vision for the rest of the land.

Plans by Toronto-based architectural firm Diamond Schmitt call for dividing the property – technically 15.4 acres of land and 4.58 acres underwater – into four zones, not including the water. The first part – which fronts along Fuhrmann, will host the 477,000-square-foot residential tower, with 206 apartments above ground-floor retail and restaurant space, 350 structured parking spaces on four floors, and a banquet and event facility on the sixth floor. 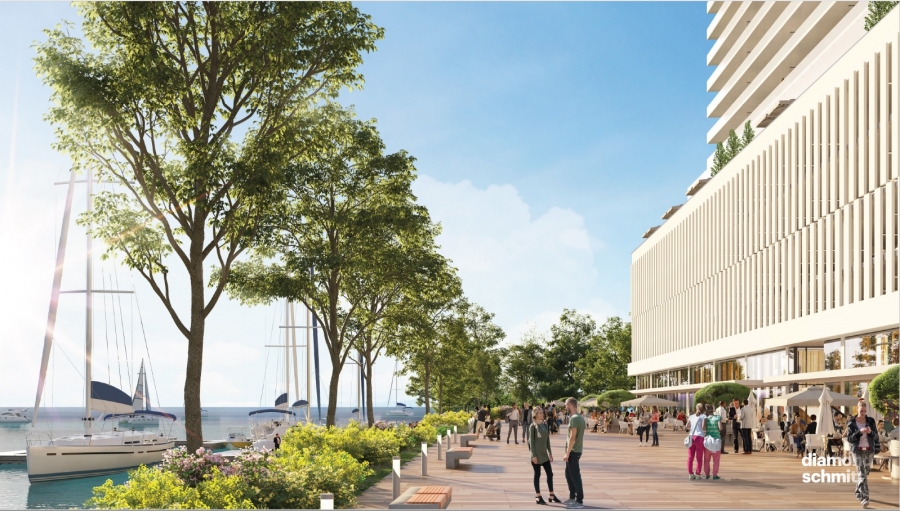 That's the project that is currently under consideration. If approved, construction could start in June and work could be completed by spring 2022.

The second zone, about 2.5 acres in size and 990 feet long, sits along the northern edge, and would be protected as open, natural space. A separate public waterfront promenade would continue along the southern side of the pier, ending in an open public space at the western tip.

Zone 3, with 3.1 acres, is midway down the peninsula, with 560 feet of waterfront along the southern edge of the land. It would consist of two six-story structures with a shared parking garage of 146 spaces and 9,200 square feet of retail and restaurant space, underneath four floors of 146 apartments. The buildings would include a second-floor rooftop outdoor terrace for residents, and would be separated by 125 feet to reduce the scale of the construction. Completion of the 170,000-square-foot mid-rise loft development is anticipated for spring 2027.

The fourth zone at the western edge would feature eight three-story clusters of four townhouses in each, with ground-level access to the public space. Each townhouse will also have rear access to a shared parking ramp with 72 spaces, and semi-private access to a second-floor community garden and amenity space. The 32 low-rise townhomes, totaling 82,000 square feet, are aimed for spring 2032. 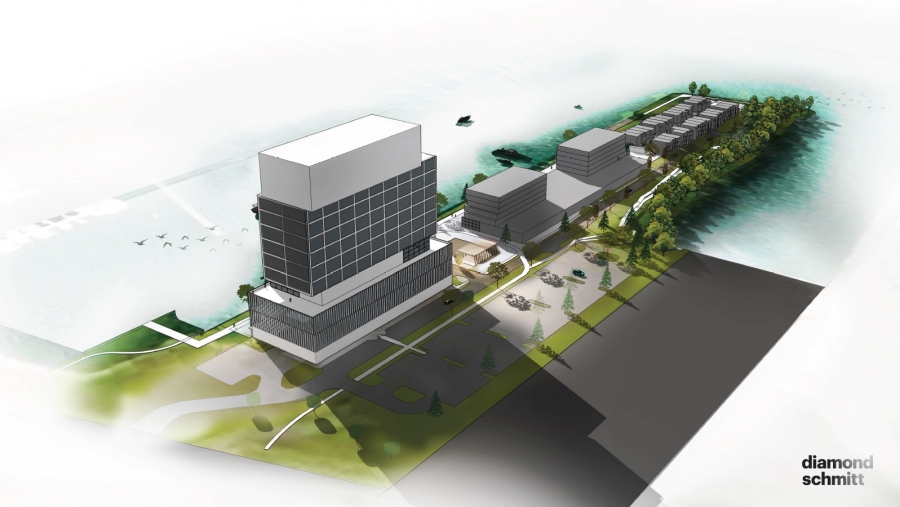