The massive Towne Gardens apartments and shopping plaza complex is on the hot seat again.

The 360-unit affordable housing community on Buffalo's East Side scored so poorly on a 2018 inspection that the U.S. Department of Housing and Urban Development labeled it "troubled." Then it scored even lower, according to a 2019 HUD report.

City inspectors have cited 34 court cases at the complex with each case containing multiple violations, such as leaky roofs and broken windows. The cases go to Housing Court on May 27, when an agent from Towne Gardens will have the opportunity to show how much progress has been made on clearing up the violations, said Lou Petrucci, Buffalo's deputy commissioner of permit and inspection services.

Meanwhile, a member of a street gang that used the neighborhood as its base of operations is on trial for murder.

Merchants at the adjacent 1.4-acre shopping plaza have complained to the Common Council about the deteriorating conditions there, including the facade in disrepair, dozens of menacing potholes and a leaky roof that looks like "Swiss cheese."

"The plaza is in deplorable conditions. We have gotten complaints from almost every tenant in the plaza about the lack of attention to the building," said Council President Darius G. Pridgen, who represents the Ellicott District where Towne Gardens is located.

The situation is so bad that the Council directed inspectors three weeks ago to conduct an "inspection blitz" - a concerted and intense check for code violations - at the commercial strip on William Street.

But Petrucci and HUD representatives say progress has been made, pointing to about $1.5 million in upgrades that are either underway or on the way at the commercial and residential complex.

Petrucci said his office "is working out the details" of exactly when city inspectors will conduct the "inspection blitz" on the shopping plaza, but he doesn't expect "a large list of violations" because the city already has 34 court cases that Towne Gardens is working to address. 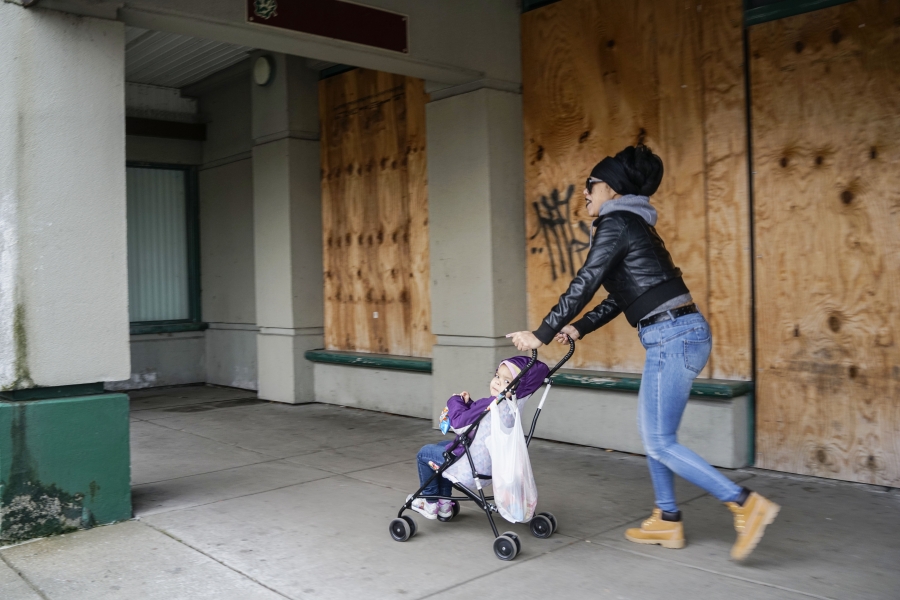 A woman pushes a stroller past a vacant storefront in the Towne Gardens Shopping Plaza in Buffalo. (Derek Gee/Buffalo News)

The shopping plaza – which has more than a dozen vacant spaces – primarily contains a Family Dollar store, a McDonald's, laundromat, M&T Bank branch, Boost Mobile, a pharmacy, a pediatric office, a health clinic and the district office of Erie County Legislator Howard Johnson.

The commercial strip used to house a supermarket and several specialty shops.

But some of the windows are broken. Others are boarded up. Most are covered in a gray-colored material that prevents people from looking inside. And the casing surrounding one of the large pillars in front of the store is gone, exposing the green plasterboard.

A large, tattered yellow banner on the facade blows in the wind.

Shoppers and neighbors are complaining.

"I almost lost my tire" said Benita Gwynn about a pothole in front of the Family Dollar. The health care worker, who works nearby, shops at Family Dollar several times a week.

"I think it's horrible," said Andrew Lewis as he was leaving the laundromat.

"I don't think it's horrible. I know it's horrible, especially like up in here in the front part of the plaza," he added, pointing to busted light fixtures and chipped paint on the facade.

"This is the only plaza really within this area besides Broadway Market," Lewis said. "There's nothing over here. The supermarket's gone. The clothing store is gone. The wig shop is gone. I'm surprised the bank's still there. I'm surprised McDonald's is still here. It's the only fast-food chain restaurant in the neighborhood."

Linda Price, who has lived near the plaza for many years, used to shop at the IGA supermarket. The loss of the market was profound, she said.

In 2019, a State Supreme Court justice appointed a receiver – Raymond Fink – to oversee the complex after Fannie Mae began foreclosure proceedings because the owners stopped paying the mortgage, said a HUD spokesperson.

Towne Gardens LLC and Moshe M. Florans own the complex.

Fink's job is to collect rents, manage the property and keep operations normalized during the foreclosure process.

HUD subsidizes 302 out of the residential units at Towne Gardens and forwards the subsidy payments to Fink for operating expenses, utility bills and taxes. Fannie Mae has regulatory oversight of the entire property – residential and commercial.

Petrucci, Fink and HUD representatives say upgrades and repairs are moving forward at Towne Gardens on both the residential and commercial sides.

"He's getting the complex headed in the right direction," said Petrucci of Fink, whom he met with recently.

Both the apartment buildings and the commercial strip have suffered decades of neglect, Fink said. "I recognize fully that the property was in poor condition, but in the last 12 months a lot has been done," he said.

The completed repairs have been mostly on the residential side, which was Fink's first priority because of health and safety concerns of the people live there, he said.

"I'm not even sure if it's a roof anymore. It's probably like Swiss cheese," he said.

Fannie Mae is paying for the repairs, Fink said. His next step is to ask Fannie Mae to fund the resurfacing of the plaza's parking lot and the replacement of exterior lighting on the poles and the building with LED lighting. Both projects will cost about $100,000.

The work has been "going as well as it can under the circumstances, but there's a lot more to be done," Fink said.

Lynne Patton, HUD's regional administrator for New York and New Jersey, is pleased with the progress and expects the property to get back on track.

"HUD is confident that Towne Gardens is currently in good hands and will continue to work on improvements so that its residents can enjoy the homes they deserve," she said.