Viewed today, the statement is even more haunting.

That’s because Lichtenberger and his girlfriend, Gianna N. Ameno, both 21-year-old North Tonawanda residents, died Friday night in a violent, six-vehicle crash at the corner of Military Road and Sheridan Drive in the Town of Tonawanda, police said.

The accident occurred at 10:50 p.m., Town of Tonawanda police said. The intersection was closed for about nine hours, reopening at about 8 a.m. Saturday.

A man and woman later identified as Lichtenberger and Ameno died at the scene, Police Chief James Stauffiger said.

Three other people were taken to Kenmore Mercy Hospital and Erie County Medical Center for treatment. Police had no update on their conditions.

Public records show Lichtenberger and Ameno shared an apartment on Fifth Avenue and friends say the pair was in a relationship and had a child together.

"They were great together," an emotional Dana Bostwick told The Buffalo News on Saturday.

Bostwick has known Lichtenberger since middle school and attended North Tonawanda High School and Erie 1 BOCES with him.

Lichtenberger and Ameno started dating early in high school and he was her first real love, said Haylee Nugent, who has known Ameno for years.

“They loved each other hard and that happens with any young couple,” Nugent said in a Facebook message to The News. “There’s definitely highs and lows but they had a bond that couldn’t ever be broken and their child strengthened that.”

Their son, Joseph, is about 3 years old and there’s no indication he was with his parents at the time of the crash.

Ameno was a devoted mother to the boy, Nugent said.

Lichtenberger worked as a roofer, Bostwick said, and Ameno's Facebook page states she worked at the new Chef's on the Go restaurant in Amherst.

"His heart was in the right place," Bostwick said, noting Lichtenberger's devotion as a friend. "He really loved her."

A Tyler J. Lichtenberger, also 21 and a North Tonawanda resident, was charged with reckless driving in October following what City of Tonawanda police described as a "road rage" incident.

Officers said he instigated a confrontation over a woman with another driver that ended in a crash. Town and city police on Saturday could not immediately confirm the two crashes involved the same man.

Police said speed was a factor in Friday's collision.

"I'm hearing a lot of different things, so I really don't know," Lori Ameno, Gianna's mother, said in a brief interview. "The police simply said it was a high-speed chase, or collision, or whatever they said."

One of the cars involved in the Tonawanda crash was involved in a minor collision at Military Road and Skillen Street in Buffalo a short time before the fatal crash, a Buffalo official said on background.

The official said a person involved in the minor crash called police to report that a person from the other car also had a gun.

When Buffalo Police arrived, one car had left the scene, the official said, adding that Buffalo Police notified Tonawanda Police that a vehicle was headed north on Military Road at a high rate of speed.

Assistant Police Chief Nicholas Bado told WIVB-TV that town police are treating the crash as a potential criminal investigation. He declined additional comment when reached by The News.

“It appears some sort of activity initiated in Buffalo,” Bado told the station. “I can’t say pursuit, or what the nature of that was, but it appears to have been coming from that direction. The vehicle was traveling northbound on Military when it reached this intersection and the collision occurred.”

The Town of Tonawanda Accident Unit and Criminal Investigation Bureau are looking into Friday night's crash. No charges had been filed as of Saturday morning.

Police are looking for witnesses who may have seen the crash to call the police confidential tip line at 879-6606. 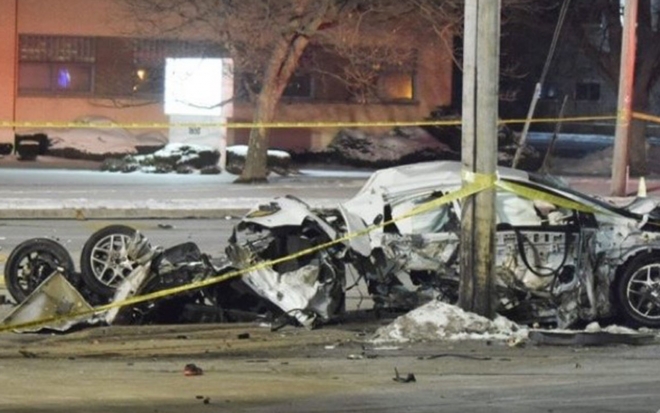 One of the cars involved at the scene of the crash. (Brian Fose photography, Facebook name WNY1984 Photos From Wildlife To Events)