Dim Lam Lun made the decision the first time she touched the keys. She was a teenager in Burma, forced to seek an education far from home amid sweeping reprisals in 1988 that shut down government schools.

She enrolled at a seminary school that had a piano, the first one Dim had ever seen. In a place where she still felt like a stranger, surrounded by children who spoke different languages, she marveled at the opportunity to put her hands on the instrument, creating a sound of such resonant power that “words cannot express.”

At that moment in her young life, she made a vow.

“I always knew,” she said, “I will make sure my kids have music.”

More than 30 years later, Dim is living out the promise on the West Side of Buffalo. As a mother of two young participants, she is both a passionate volunteer and an informal pupil with Buffalo String Works, a community music program in which 16 teachers offer free classical lessons to about 75 children from backgrounds that often involve struggle, many from immigrant or refugee communities.

“Music gave me an identity and built my confidence,” said Yuki Numata Resnick, one of the co-founders. “It has the potential to completely change a life, to become the thing that makes you whole and makes you proud.”

Certainly, those qualities brought Dim's family to the program. She and her husband, Daniel, arrived in 2008 in Buffalo. Their son Ethan Leong was an infant, while their daughter Olivia would be born two years later. As the children grew older, Dim became increasingly aware of how many kids burn away time "looking at phones and watching TV,” and she was eager to find alternatives. 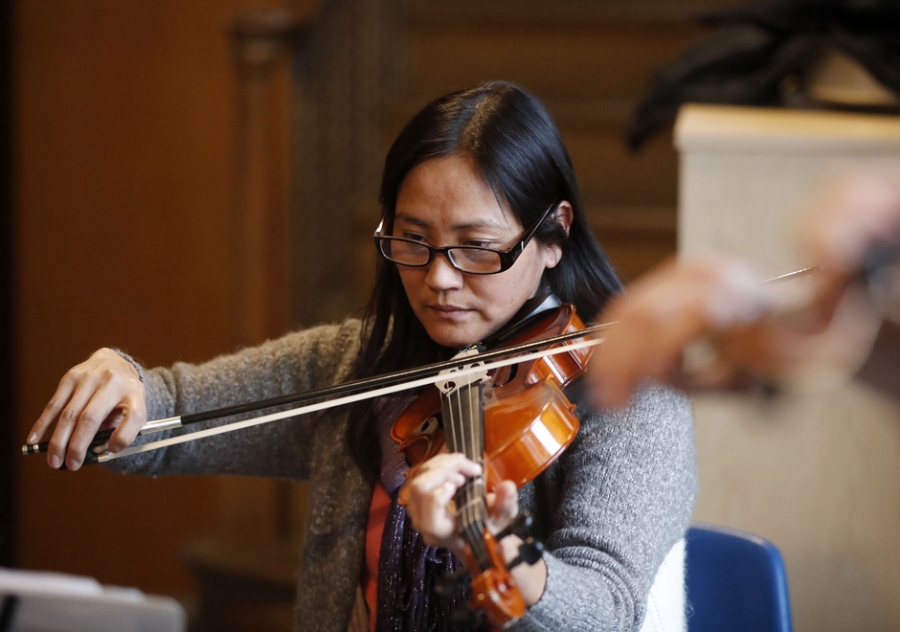 Two years ago, she watched with awe as a few young musicians from String Works performed selections inspired by Buffalo's Karen community, an immigrant group in which her husband serves as a prominent leader, during a celebration at P.S. 18 Community School.

Afterward, Dim approached Virginia Barron, one of the co-founders. Dim not only signed up her own children, Numata Resnick said, but quickly recruited another dozen or so girls and boys from the Burmese community. She now helps them line up transportation to the Buffalo Dream Center on Lafayette Avenue, where the String Works students practice three times a week.

In what an appreciative Dim sees as the chance to live out a lifetime dream, she and a friend, Eh Tha, regularly sit in to practice with a children's class taking violin lessons from Isaac Hutton, one of the instructors. He makes the drive from Rochester, he said, because he believes so deeply in the program, based on an international model known as El Sistema.

The idea, as Numata Resnick puts it, is “that music has the ability to transcend barriers and create social change.”

To Hutton, then, Dim is not really a student.

"She's more of a collaborator," he said, "and we're going to the same place."

The program sprang from a spontaneous moment six years ago. Numata Resnick, who learned violin during a Vancouver childhood, had moved here from New York City to become an assistant professor of viola and violin at the University at Buffalo.

She was in her first year, “a brand-new mother with a brand-new position,” when Elise Alaimo, then a music teacher at Buffalo's International School, approached her about performing for the children with a piano quartet that included Barron.

The National aims to effect change through music and help refugees

Numata Resnick is a fierce believer in bringing music to children in the city, where parents and teachers have gone to court with their claim that the Buffalo school district fails to provide adequate music education. As the quartet began to play at the International School, Numata Resnick half expected her small listeners to be restless and distracted.

Instead, they zeroed in as the little group performed a slow movement from Brahms. Barron, watching children raised by parents from nations around the world, still recalls "how a light came to their eyes." Asked for a response, one shy 7-year-old – who they all remember had crawled beneath a desk while they played – raised his hand and said: 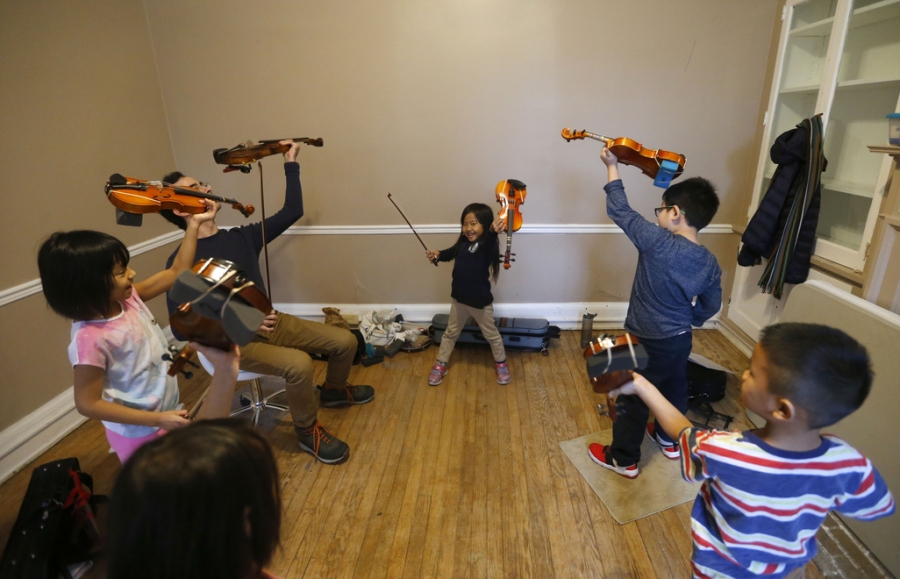 Buffalo String Works instructor Evan Courtin with his students during a practice at the Buffalo Dream Center. (Mark Mulville/Buffalo News)

That was the ignition point on which String Works was born. It was founded by Numata Resnick, Alaimo and Barron, a professional viola player who drove to Rochester and traded in one quality violin for 12 instruments that gave them enough to start. Within a year, Numata Resnick – now executive director – had resigned from UB to devote herself full time to the program.

The focus is on children from 10th grade through tiny kindergarten pupils. While initially centered on the West Side, String Works has gradually expanded and now draws from schools throughout the city. Numata Resnick said it holds about 15 concerts and public performances each year, always accompanied by interpreters with roots in the Somalian, Congolese, Burmese and other refugee communities.

The next concert, on March 7 at the Hotel Henry, is a critical fundraiser for the organization. As for the larger impact, Numata Resnick asked several children to describe it for themselves.

Yamilette Garcia, 11, has been playing again for two years, after first picking up the violin in the third grade. Before String Works, she went through a time in which she had no way of taking lessons, a time when she felt “like I lost a piece of me.”

Whatever sadness comes into her life, she said, seems to vanish when she plays, meaning practice is not a chore but a respite. Numata Resnick also sat down with a 9-year-old named Jariel Pichardo, who paused from an interview to ask his teacher if he could push ahead in his book, seeking to go far beyond their lesson for that day.

"He has boundless enthusiasm," Numata Resnick said, "and he always wants to do the next hardest thing."

Match that drive with joy, she said, and you have a guiding principle. As she spoke, the front door opened and she greeted Nay Blue and Hay Blue Myint, 16-year-old twins who began lessons at 12, moved on to Sacred Heart Academy and now return to String Works to serve as volunteers.

All the effort is worth it, Hay said, because “this brings happiness.”

To Dim, hearing dozens of children of wildly different origins in harmony on violin triggers the same reverent wonder she felt upon first touching the piano. She was teaching in Thailand, she recalls, when she became pregnant with her son Ethan. She began playing a Mozart CD for him while he was in the womb, hoping for some mystical connection with the music. 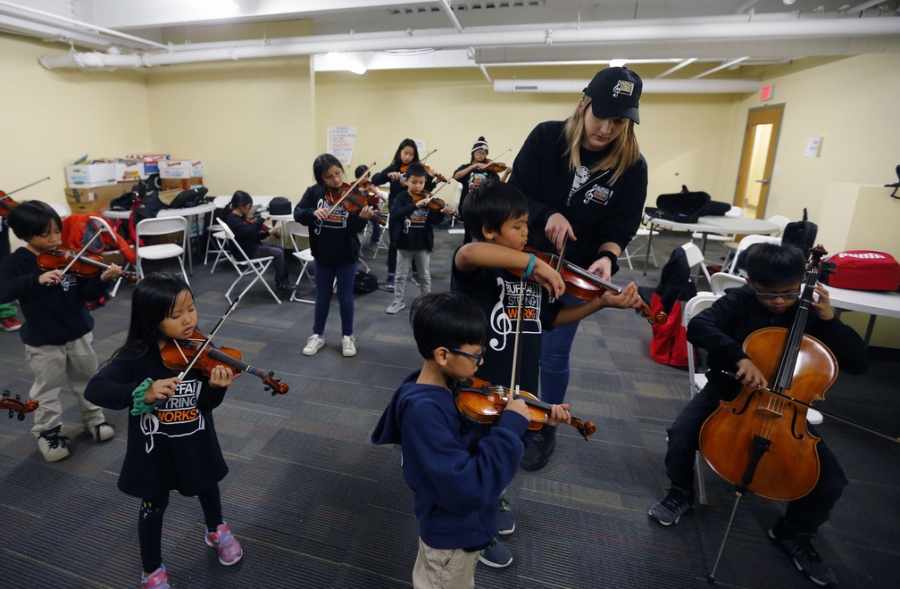 Laura Jay, a teacher with Buffalo String Works, during a rehearsal for a holiday concert at West Buffalo Charter School in December. (Mark Mulville/Buffalo News)

Dim speaks three languages and describes music as a fourth. She and her husband are content and grateful, she said, with their lives as they are in Buffalo – in no small part because of String Works.

“The gifts of being here,” Dim said, “are music education and a bright future for our kids.”

She tells her children she hardly expects them to be professional musicians, understanding other demands and other passions may come into their lives. Still, the principles Numata Resnick sees as the bedrock of the system are exactly what Dim feels when she hears her children practicing.

The music propels them both toward love, and the next hardest thing.