Dedra Robinson grew up in the Commodore Perry public housing complex, was 13 when her mom died, and pregnant when she graduated from Hutchinson Central Technical High School. She had a job at Burger King by then, but it didn’t take long before work as a nurse’s aide seemed a better way forward.

Kittrella Whitlock left Buffalo after graduating from the same school, landed university degrees in communications and public relations, and returned home almost seven years ago to take a good job at Yahoo. She got laid off five years ago, shortly before her father suffered a stroke, and during his recovery wondered why she’d long ago abandoned her dream of becoming a doctor.

The Pathways to Nursing Success Program promises both women the chance to blaze a new career.

Trocaire College offers the program, which provides $10,000 each school year in tuition breaks and stipends, as well as academic and professional support to minority students with limited means. This lowers barriers toward either a two-year registered nursing degree or four-year bachelor’s in nursing, and in many cases, both.

“We wanted to do something where we address the population of students who are financially disadvantaged and often the first generation in their families to attend college,” said Ann-Marie John, dean of nursing at the South Buffalo school.

The program is one of 35 across the country designed to bring a more diverse, well-prepared pool of nurses into parts of the country where racial economic disparity and the need for more health care providers – particularly in primary care – are pronounced.

Pathways – singled out at a conference last fall as the best program of the bunch – began in 2017 in a region pegged by the U.S. Census Bureau as among the top 10 most segregated in the nation.

Buffalo Niagara housing trends have been slow to change the racially separate ways that took hold in many Rust Belt cities during the mid-20th century and worsened with “white flight” to the suburbs. Today, more than one-third of black residents in the region continue to live in predominantly black neighborhoods, more than twice the national average. The black poverty rate of 33.1% is more than three times that for whites.

“Only 6% of the nurses in this area identify as minorities,” said Shawnte Wilson, a social worker and Pathways program coordinator. “In terms of diversity in Buffalo, our population is way higher than that.” 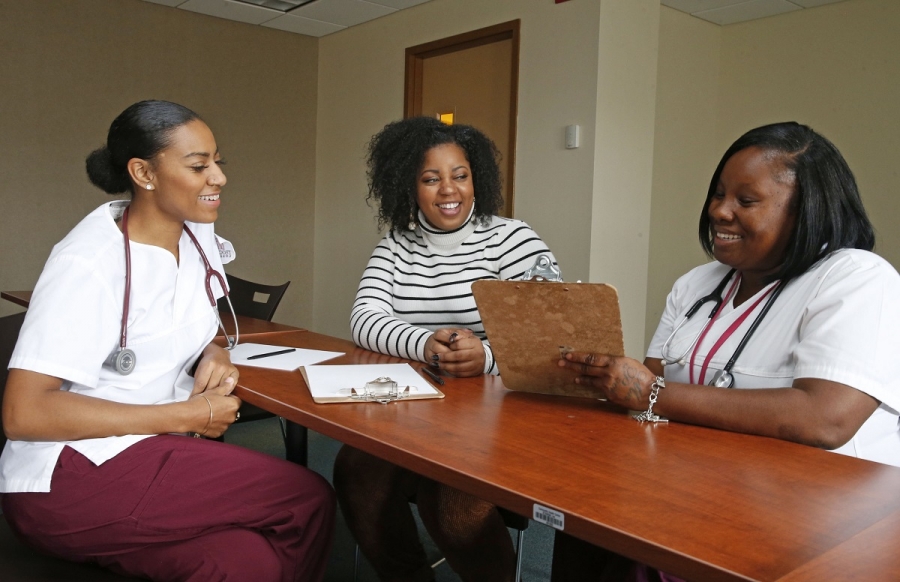 Nursing students Kittrella Whitlock, left, and Dedra Robinson discuss their progress with Shawnte Wilson, center, the Pathways coordinator, after their intern shifts at the Community Health Center of Buffalo. Such discussions are common in the program, which provides financial, academic and other support to student participants. (Robert Kirkham/Buffalo News)

The nursing school led the effort to secure the grant – the only one given in New York State – bringing added resources to a small, private institution with about 1,200 students and no on-campus housing.

The nursing school has almost 750 students in three programs. Its dean also is principal investigator of a study gauging the impact of Pathways.

Pathways provides a set of tools to increase the odds of success for up to 25 students at a time who meet its guidelines. It has so far served 37 students; almost 90 more are on a waiting list. The retention rate has been 96%. All its graduates have found nursing jobs or gone on to advance degree programs at other schools.

Students have access to tutors and three mentors – one a professional nurse, another a faculty member and a third a fellow Pathways participant, generally someone in an upper class who has successfully navigated the program.

Participants take a full-time course schedule of 12 to 16 credit hours per semester, including clinical rotations that start the first semester at nursing homes, then move into primary care settings and hospitals that include Buffalo General and Erie County medical centers, and Mercy and Oishei Children’s hospitals.

Wilson leads regular gatherings on-campus and in the field to further train and support student participants.

“It's been rewarding, and it's been a struggle,” Robinson said. “Nursing school is not easy. When I decided that this is what I wanted to do, I had to make sure it comes first.”

Like three of every four students in the program, Robinson is a parent. Her oldest, daughter Amber Quinney, is now a 24-year-old small business owner. Robinson also has two sons, ages 22 and 7, and two grandchildren.

Like 92% of fellow Pathways students, she also works. She became a licensed practical nurse in 2007 and juggles school with per diem nursing jobs at the Mercy Nursing Facility at OLV, Buffalo Public Schools and Absolut Care.

Whitlock, 30, works in patient transport at ECMC. She just started her fourth semester with Pathways.

“I needed to be in this program,” said Whitlock, who has become a peer mentor. Wilson, she said, “has been so instrumental in all of our success here.”

Nearly 90% of Trocaire nursing students are women, John said. Roughly one-third are below age 22 and about half are 23 to 35. About 20% are black, 8% are Latino and most of the rest are white.

Slightly more than 47% of city residents identify themselves as white, 37% as black, 10% as another race and the rest as multiracial, according to the U.S. Census Bureau.

A growing number of Trocaire nursing students count themselves among the ranks of those below 200% of the federal poverty level, John said.

Most students in the Pathways program are women aged 19 to 30, she said. English is the second language for 12% of participants. 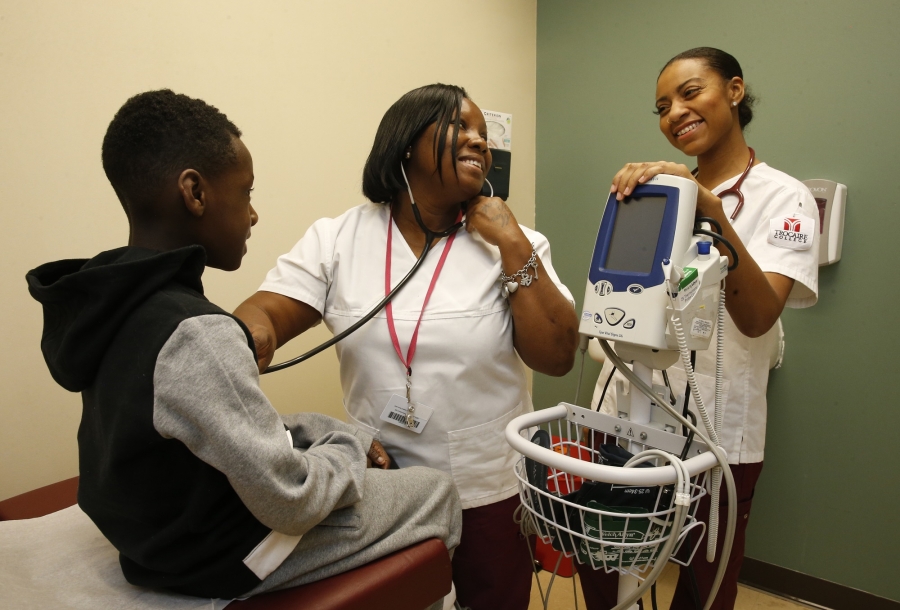 Nursing students Dedra Robinson, left, and Kittrella Whitlock, are among moms with jobs in the Pathways program, as are most student participants. (Robert Kirkham/Buffalo News)

Pathways dynamics – and the implicit bias that studies have shown can impact both patients and health providers of color – help explain why John encourages students to do at least some of their clinical work at sites that serve immigrant, refugee and minority patients. In Buffalo, they include Jericho Road Community Health Center, OLV Human Services (formerly Baker Victory Services) and Community Health Center of Buffalo.

The dean holds a doctorate in nursing, and is among health care professionals of color who can give accounts of patients who mistook them for a nurse’s aide, in her case while working downstate.

“The way I've dealt with that,” John said, “is I follow up with the question: ‘Help me to understand what would make you think that I'm the nursing assistant, because clearly I have a stethoscope around my neck, and my ID is very visible on my chest?’

The nursing school learning curve should include exposure to all kinds of patients, create cultural competency and help health care providers of all stripes understand their own unconscious and unexplained biases, John said.

At the start of the Pathways grant, nursing school faculty and staff took 10 hours of training at the Erie Niagara Area Health Education Center that focused on all three. Pathways student gatherings also have included Q&As with those from Native American Community Services, BestSelf Behavioral Health, Compass House for homeless youth and Project Mona’s House for victims of sex trafficking. Nurses with the Erie County Sheriff's Office have come in to talk about treatment of inmates.

“We really try to get anybody who works with specialized populations to come in and talk to our students because they are likely to see these people at some point during their professional careers,” Wilson said.

In many cases, those introductions will be welcome by patients who are sick, frightened and in need. Several Pathways students are Hispanic and speak Spanish fluently. Program participants also include someone who is Native American, several from the Islamic faith and three students from Africa, Wilson said.

This is among the reasons leaders with the Community Health Center of Buffalo welcome aspiring RNs in the program to work as interns beside their staff, Nursing Director Rudo Mushonga said.

“We have patients that come in from Syria, Africa, you name it,” said Mushonga, a native of Zimbabwe who trained in England before arriving in the region several years ago. Several center patients have become nurses, she said. “We have an RN who speaks about five languages, and whenever she is running into someone from her native country, it’s a good experience.”

Brandy Barber, 27, is among those who became an RN in the Pathways program. She is now in the bachelor’s program and has become a role model to many newer to the program. The single mother of two children, aged 4 and 7, recently became a nurse supervisor at Elderwood nursing home on Grand Island.

“I still have a lot of things going on in life, but I'm gonna push through,” Barber said. “This program is making me a stronger nurse. It builds on to your career, builds on to the person you are. I’ve learned so much about myself. It opens your mind and gives you a different perspective of things.”

The Pathways grant ends in 2021. John already is looking at another grant that would expand the definition of a disadvantaged student and focus primarily on scholarships.