Tom Golisano eased back in a chair, collar open, his sportcoat left with the doorman downstairs so it wouldn’t soak up the smoke from the cigar in his hand.

It was 3:30 p.m. on Thursday afternoon in the Buffalo Club. And it was a moment of respite during an otherwise busy week for the 78-year-old businessman, who splits time between his home in Florida and his hometown of Rochester, where he started the payroll company Paychex nearly 50 years ago.

Two days earlier, Golisano was in New York City to give a series of interviews and talks for the release of his book, “Built Not Born: A Self-Made Billionaire’s No-Nonsense Guide for Entrepreneurs.” The promotional efforts were working: Golisano received word that the book was No. 1 in Barnes & Noble’s business section, and the book retailer’s No. 11 overall.

“The most common reaction I’ve gotten to the book is, ‘Why didn’t you write it 20 years ago?’ ” said Golisano, whose chapters offer advice in areas including raising capital, developing products, generating sales, and protecting your business assets. (“Get a prenup!” writes Golisano, who is married to the former tennis star Monica Seles.)

This evening was a break from book promotion. In a few hours, Golisano would be making his return to KeyBank Center for the Buffalo Sabres’ celebration of their 2000s decade. Golisano, who purchased the team out of bankruptcy in 2003 and turned it into a profitable business, would be reconnected with several of his former players, and with Terry and Kim Pegula, to whom he sold the team in 2011.

Golisano was going to be recognized during an on-ice ceremony before the Sabres’ game against the Columbus Blue Jackets, which raised an obvious question: How would the fans react? Would they recognize Golisano as the billionaire from Rochester who stabilized, and likely saved, the franchise? As the owner whose 2005-06 and 2006-07 teams were among the most exciting in franchise history? Or would they remember him as the businessman who acknowledged when he bought the team that he wasn’t a hockey fan, and as the owner whose team lost two of its best players – Chris Drury and Daniel Briere – to free agency on the same day?

Would it be gratifying to get a positive fan reaction? Or to be blunt – and as Golisano writes in his book, he prefers people be straightforward with him – does he care?

“I’ll tell you what: These two guys deserve it,” Golisano said, pointing to his left and right. He was flanked by Larry Quinn, who was managing partner of the Sabres under Golisano, and Dan DiPofi, who oversaw the team’s finances. Both men earned equity stakes in the Sabres and, when Golisano sold the team for $189 million to the Pegulas, became wealthy.

Quinn and DiPofi got money, but in Golisano’s mind, there’s something else they didn’t receive. “They did the hard work,” he said, “and they did not get credit for it.”

Neither man had high expectations of a rousing reaction from fans. 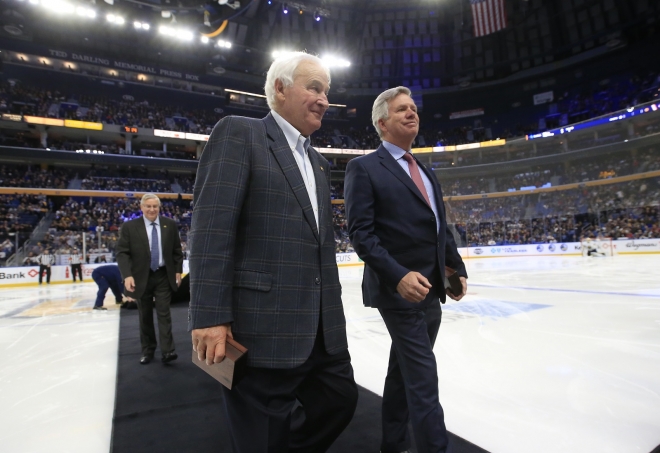 “It would be nice, but I stopped investing in that a long time ago,” said Quinn, who in the mid-1990s oversaw construction of the hockey arena under the Sabres’ original owners, the Knox family, and then served as team president until he was fired by the next owners, the Rigases. But the Rigas family ownership crumbled when their main business, Adelphia Communications, went bankrupt and patriarch John Rigas and his son Timothy were sent to federal prison on multiple counts of fraud. With the Sabres’ future in question, Quinn and DiPofi ultimately helped Golisano make a bid to National Hockey League Commissioner Gary Bettman, who was overseeing the franchise until a buyer was found.

At the time, Golisano was curious why Quinn and DiPofi bothered to present him with the opportunity.

“Why did you give me a projection that does that?” Golisano asked.

“It happens to be the truth,” Quinn said.

Golisano thanked them, but said he couldn’t do it. But over the next few months, he gave it more thought. Golisano concluded that by treating the Sabres like a business designed to make a profit – rather than as a billionaire’s real-life equivalent of a free-spending fantasy hockey team – he could make it work. But he wanted Quinn and DiPofi to run it.

“We tried to give him a realistic view,” DiPofi said. “He probably looked at us as someone he could entrust running the business.”

He still does. Quinn and Golisano are in regular contact, and Quinn served as a pre-publication reader for Golisano’s book. DiPofi, after spending eight years in retirement, went back to work for Golisano recently, helping him vet and manage private investments in startup companies. In late 2019, Golisano made large investments in two Buffalo companies: He invested $20 million in PostProcess Technologies, a 3D printing technology company, in November, and put another $20 million in December into Viridi Parente, a clean energy company.

Golisano and DiPofi met with both companies during the day on Thursday.

“We were just at some board meetings today where they handed out packages this big,” DiPofi said, using his thumb and forefinger to approximate a thick written report. This is a Golisano no-no. In “Built Not Born,” he advocates strongly for brief, to-the-point business plans – documents that are precise in vision and devoid of unneeded details, graphics and pictures.

“They haven’t learned yet,” DiPofi said, his eyes glinting. This is a common lesson Golisano teaches the people around him.

“You’ve got to give them a copy of the book,” DiPofi said. 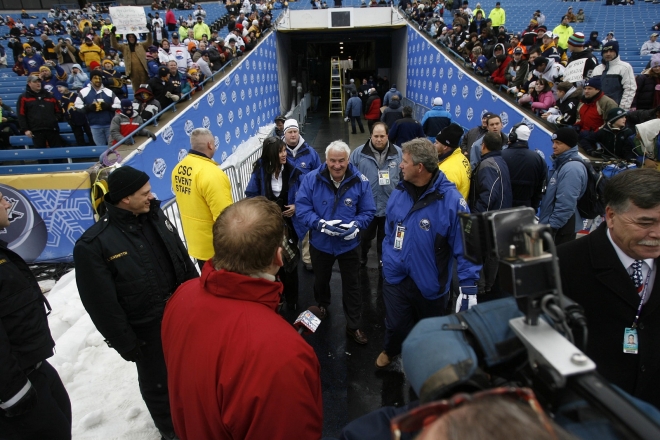 Golisano laughed. He told the executives earlier that day to cut their presentations to the core details.

“I think I’ve been accused of being very direct,” Golisano said. “I want to be treated that way. Would you say that’s fair?”

“Absolutely right,” Quinn said. He recalled a Sabres executive who was nervous about presenting to Golisano and prepared a detail-laden, 50-deck slideshow. “That’s the worst thing you can do with Tom,” Quinn said. “Just be able to get on your feet and talk about our sales and what you expect.”

And know your numbers. This is both a key Golisano bit of advice from the book, and expectation if you work for him. Or even if you don’t.

One time at a Sabres game, Golisano was hosting former President Bill Clinton. Golisano was a significant donor to the Clinton Global Initiative, which was designed to bring together influential leaders from around the world to tackle international problems. But after the first meeting of the Clinton Global Initiative, Golisano had some concerns about spending and wanted to review them. Golisano pulled out a ruler he carries with him – one with a magnifying glass in the middle, perfectly designed for reviewing spreadsheets – and asked Clinton to sit with him in the Sabres’ office. Together, they reviewed the budget, including details such as cutting down on exotic breakfast foods that Golisano noticed people weren’t eating.

“I was pleasantly surprised the way he reacted, because he listened to me, and he made some decisions based on the input that I gave him,” said Golisano, who also tells this story in his book. Clinton and Golisano remain friends, and were talking on the phone several days ago about their grandkids – and still joking about the line-item review. “(His) staff didn’t like it too much,” Golisano said, “but Bill Clinton handled it really well.”

Another Golisano rule is maintaining a graceful public image, something he had the chance to exercise Thursday night. After his wife arrived at the Buffalo Club, Golisano, Quinn, DiPofi and their friends, family and staff headed to the arena. After catching up with Bettman and the Pegulas, Golisano was led to the Sabres’ media room for a pregame scrum of media interviews. Standing in the room finishing his own interviews was Daniel Briere, a star on Golisano’s Sabres whom the team didn’t re-sign as a free agent in 2007. Briere has expressed disappointment over the years that the team didn’t keep him, and the departure that summer of both Briere and his co-captain Chris Drury has been a sting many Sabres fans and media have never quite soothed.

Briere was diplomatic about it Thursday night.

“There’s not hard feelings,” he said. “I thought I was going to be a Sabre for the rest of my career, honestly. After the season, things happened. Things happen for a reason. I’m not trying to throw anybody under the bus. It’s done. We can’t change anything about it.”

When Golisano entered the room, he held off on answering questions until he could greet Briere.

“Wait a minute,” Golisano told reporters. “I want to say hello to this guy.” He tapped Briere. “When I heard you were coming, I was very glad.”

“It’s good to see you too,” Briere said politely. “Awesome.”

The fun seemed to happen. When Golisano, along with Quinn and DiPofi, were introduced before the game, the crowd delivered a standing ovation. A video tribute to Golisano acknowledged that he came into the Sabres as a businessman looking to save a franchise, and left as a hockey fan. It ended with the line, “Thank you for believing in Buffalo.” And the crowd cheered again.

'Tom saved hockey in Buffalo': How the Golisano years rescued the Sabres