A demolition ball 40 years ago this month reduced the Metcalfe House on North Street to rubble.

The shingle-style brick and sandstone structure, completed in 1884, was the first residential commission in Buffalo by McKim, Mead & White, one of the era's prominent architectural firms. The anger unleashed over its loss became the catalyst for the city's preservation movement – then led by academics and patricians – to become more activist-oriented.

While the house is long gone, two rooms – the solid cherry dining and living rooms – were preserved before the demolition occurred and reconstructed inside SUNY Buffalo State's Rockwell Hall. The rooms are tucked away behind an unmarked door in the college's Performing Arts Center.

"The house was a very significant part of the architectural heritage of Buffalo and of the United States because it was the beginning of the firm that became the leading architectural firm in America in the early 20th century," said Frank Kowsky, a SUNY Buffalo State distinguished professor emeritus of art history who played a key role in salvaging the rooms.

The Metcalfe House was located just west of the Williams-Butler Mansion at the corner of North and Delaware, now the University at Buffalo Jacobs Executive Development Center.

Delaware North's demolition of the house to make way for a parking lot that was never built was something those unable to save the building wouldn't forget.

"We weren't going to let this happen again without a fight," said Sue McCartney, who co-founded the Preservation Coalition of Erie County in the Metcalfe House's wake and served as president.

The group, with Tim Tielman as executive director, went on to lead the charge to save numerous threatened buildings over the next two decades. Among them were the Buffalo State Asylum for the Insane, now the Richardson Olmsted Campus, the Squire Mansion, the Connecticut Street Armory and the Plymouth Methodist Church, now the Karpeles Manuscript Museum.

The group also created the Cobblestone Historic District to preserve the 19th century streets and buildings.

The Metcalfe House was named for a prominent 19th century Buffalo family.

James H. Metcalfe was a banker and early parks commissioner who helped implement Frederick Law Olmsted's plan for the city park system. A street on the East Side is named for him.

After Metcalfe's death in 1879, his widow, Erzelia Metcalfe, who lived with their son, James, a future New York City drama critic, hired McKim, Mead & White to design the house. Stanford White, a former assistant to H.H. Richardson, was the lead architect on the project. 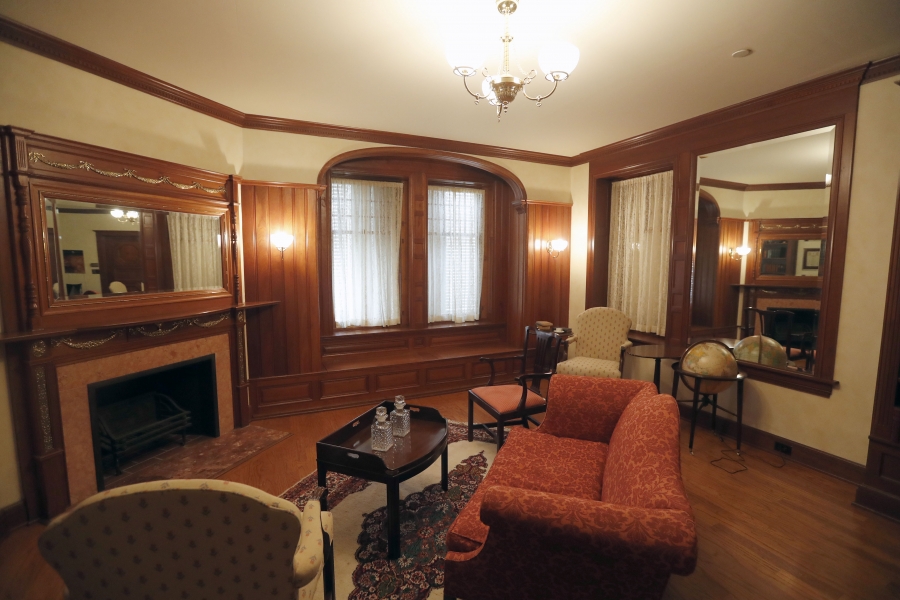 The library from the Metcalfe House is preserved at SUNY Buffalo State in Rockwell Hall. (Mark Mulville/Buffalo News)

Metcalfe chose a "suburban country house,"smaller than the extravagant Victorian Gothic and Second Empire styles that were in vogue for the well-heeled. The design of the Metcalfe House, built for $23,464, reflected the practicality that characterized colonial architecture. The rooms were smaller and the ceilings lower, requiring less heat, fewer furnishings and a smaller number of servants.

Metcalfe sold the house in 1905 to Edwin Thomas, whose exterior changes included extending a piazza across the entire front of the house. In 1921, the building became a boarding house, which it remained late into the 1970s.

The house's upkeep was neglected for years when Delaware North, the Buffalo-based food service and hospitality management company, bought the rundown property in 1979. The company announced the Williams-Butler Mansion would be its company headquarters on the condition the Metcalfe House be demolished to build 38 employee parking spaces. Parking lots were created west of the property with the takedown of buildings at 127 and 147 North.

Joan Bozer, who as an Erie County legislator led the fight to save a historic post office and turn it into the downtown Erie Community College campus, was one of the people who sounded the alarm. John Conlin, editor of Western New York Heritage magazine, was another. People began meeting about how to save the house, and Mosette Broderick, an expert on McKim, Mead & White, was brought to Buffalo to speak about the house's architectural importance.

Broderick later said the Metcalfe House was more worthy of saving than the Williams-Butler Mansion. "Here you had a very rare early McKim, Mead & White house," she told The Buffalo News in 1989. "They're almost non-existent; you lost that. The wrong house went down by a long shot. It's very depressing."

Austin Fox, the president of the Landmark Society of the Niagara Frontier, a blue-blood preservation organization, urged that parking alternatives be researched before demolishing the house. The Society for Architectural Historians registered its concern, as did the National Trust for Historic Preservation.

The Buffalo Landmark and Preservation Board approved the demolition on Dec. 19, 1979.

Delaware North suggested the cherry wainscoting, molding and other carved features in the house be removed prior to demolition and reconstructed elsewhere. 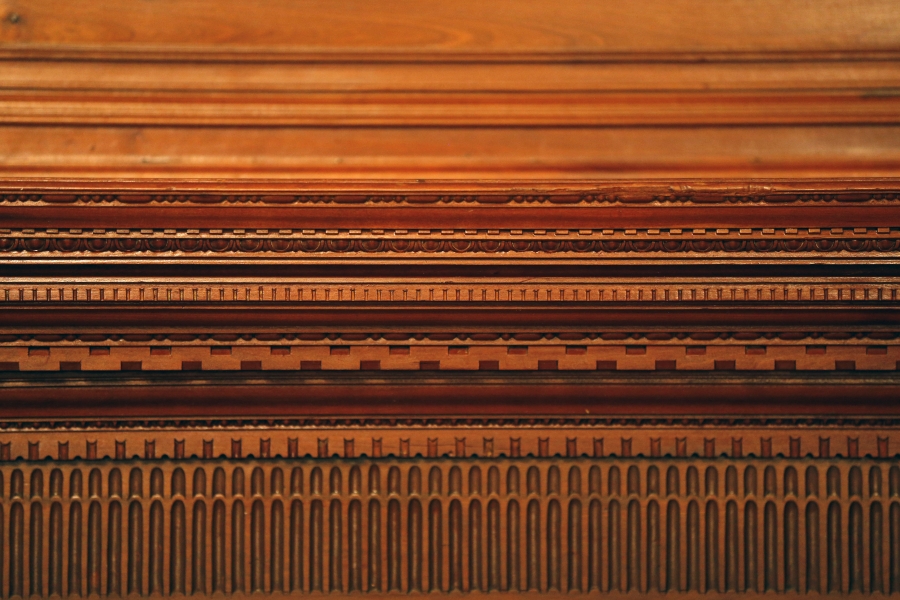 Details in the woodwork of the fireplace mantle from the Metcalfe House preserved at SUNY Buffalo State in Rockwell Hall. (Mark Mulville/Buffalo News)

Accepting there was no other alternative, Kowsky asked R. Craig Miller, assistant curator of the American Wing of the Metropolitan Museum of Art, about taking rooms to exhibit. After going inside the house, Miller agreed, and procured the entry, stair hall and parlor.

Kowsky got Buffalo State, with the support of Bruce Johnstone, the college's president, to take the dining room and library.

Still, Kowsky felt dismantling the house should never have been necessary.

"[The house] was in remarkably good condition considering it had been a boarding house," Kowsky said. "If the Metropolitan Museum wanted the interior for its collection, it wasn't a piece of junk. It was – architecturally and historically – the most important of the McKim, Mead & White houses in Buffalo."

Courier-Express art critic Richard Huntington lamented the loss in a Jan. 27, 1980, article: "It can be said flatly that this is not a house which can be experienced piecemeal. A room in limbo behind velvet ropes or an architectural fragment in a glass case cannot possibly convey the joyous interaction of White's inventions."

A last-gasp lawsuit filed Feb. 8, 1980, on behalf of the Save the Artistic Metcalfe House Association was rejected by the State Supreme Court. That set the stage for a two-week period in which the interior rooms were removed with help from the college's art conservation department, and demolition commenced. 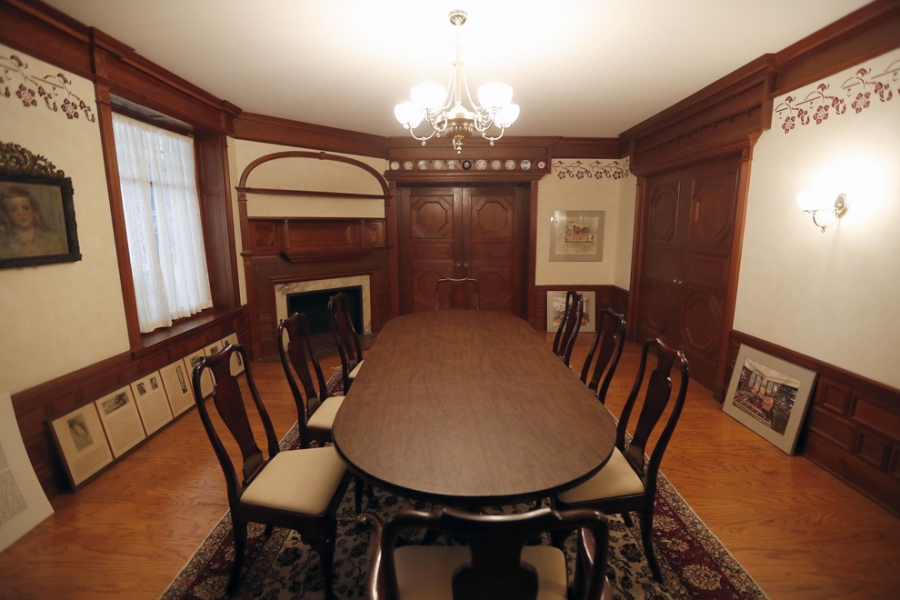 The dining room from the Metcalfe House is preserved at SUNY Buffalo State in Rockwell Hall. (Mark Mulville/Buffalo News)

Putting some pieces back together

The dining and library interiors were taken apart and stored in boxes before being put back together at SUNY Buffalo State for a cost of $220,000.

Nearly a decade later, carpenter Bernie Sekera spent four months putting the rooms back together inside Rockwell Hall. He wasn't given many dimensions, and had to go by photographs taken just before the building was torn down. The boxes contained fragments that had cracked and splintered after the century-old solid cherry molding was torn from the plaster.

"You're basically an anthropologist when you start out," Sekera said at the time. "I had to measure and build everything in reverse."

The reconstruction work was financed through private donations, including $40,000 from Delaware North, and a large contribution from the Seymour H. Knox Foundation. The restored rooms, including the removal of white latex paint applied to the wood during the boarding house years, opened at Buffalo State in 1989.

The Met exhibited the entry and the stair hall, with a basketweave pattern on the walls of the staircase, two years later in 1991. The parlor, due to difficulties in identifying the original design, has remained in storage. Two windows moved from the house during a period of remodeling were presented to the Met the following year.

But years before then, Delaware North announced it no longer needed the parking spaces that were the reason for the house's demolition.

At one time, four McKim, Mead & White houses were on North Street, near Delaware Avenue, each reflecting different periods of the firm's work. Today only the Williams-Butler Mansion remains.

But at Buffalo State, the cherry woodwork in the dining and living rooms, with flutings, sunburst patterns and other ornamental details, the fireplaces in each room with marble and plated metal and other features are well-preserved.

Some things are no longer original. The furniture and the bookshelves aren't, nor are the ceiling lamps, the dining room table or a vine pattern on the wall where there was once a hand-painted decoration of leaves and flowers.

Susan Eck, a researcher who has written about the Metcalfe House on a blog, felt sad when she visited the rooms at the Met.

"I just thought what a loss, what a loss," Eck said. "They are quite beautiful to look at on their own at the Met. The woodwork is exquisite and it's wonderful that it was saved, but you are left with a less than intact impression of what it was like to visit the Metcalfe House."

Open to the public

Although the Metcalfe Rooms are not publicized at the college, they can be visited by appointment, said Carlos Jones, interim dean of the School of Arts and Sciences.

"Our position is that we very much respect, honor and cherish the space," Jones said.

He said the rooms are used for meetings, including cabinet meetings with the college president.

"We take very good care and are protective of it because of its historical value," Jones said. "We want it to last and not get a lot of wear and tear. Unfortunately, we don't have the financial means to keep it up as a museum, but any time someone wants to see it they can do so."

Jones said appointments to tour the rooms can be made by calling the dean's office at the College of Arts and Humanities at 878-6326. The college may also look into putting up signage to make more people aware the Metcalfe Rooms are there, he said.