As the local concert scene continues to grow and morph, it’s become increasingly easy to forget about our old friend, the dearly departed Buffalo Memorial Auditorium. The Aud, which closed its doors in 1996 and was demolished in 2009, was a preeminent concert facility during the golden age of the fully produced, hyper-amplified rock concert.

Jeff Miers remembers the old Memorial Auditorium in a series of posts proving the Aud wasn't just a hockey arena – it was an electric church. Here are some of the top concerts the Aud hosted in the '80s and '90s.

Background: Springsteen’s shows at the Aud – first, as part of the “River” tour, and a two-night stand during the “Born in the USA” tour, when he was arguably the biggest artist in the world – are routinely referred to by area Boss-aholics as the best of the best.

Bill Gilligan: “For the '84 show, I literally had the worst seats in the house – last row of the oranges, in the section farthest from the stage. Didn’t matter. It’s the best rock show I've ever seen – and I've seen a lot of them.” 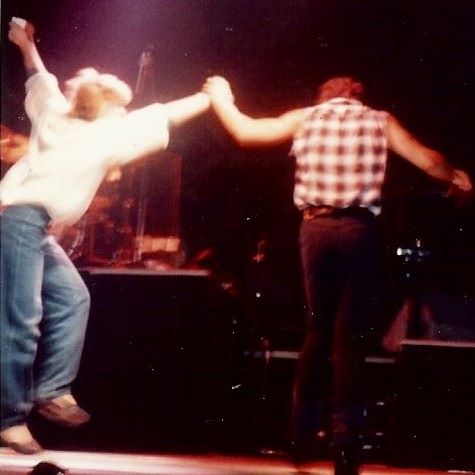 Bruce Springsteen brings a fan on stage to dance at the Aud in 1984. (Photo courtesy of Thomas Hennegahn)

Thomas Henneghan: “At Springsteen (in 1980), the local police were dancing in the aisles. We got out of the Aud well past midnight. For the September ’84 show, I had front row seats. Bruce pulled my girlfriend at the time up onto the stage and danced with her during ‘Dancing in the Dark. ’ ”

Jim Burns: “I was at the (1980) Springsteen show. At that time, I was working at a factory on the East Side of Buffalo. I had gone to McDonald’s for lunch that day – the one on Main Street, downtown – Bruce was sitting in McDonald’s eating lunch by himself. I nodded hello to him. I didn’t want the other people bugging him because he had no security around him.”

Vinny LoTempio, high school teacher: “Next to Queen in 1978, Springsteen ’84 was the best show I ever saw at the Aud. Three hours and 45 minutes long. Last 45 minutes, during the encore, all the house lights in the Aud were on, and we were in the oranges. With all the dancing and jumping you could actually feel and see across the Aud a ripple kind of effect going through the upper deck. For a minute, I thought we were in trouble. But in true rocker fan fashion, we forgot about it and just kept jumping around.”

Steve Fleck: “My favorite show was Bruce (in 1980). I slept out on Delaware Avenue for four nights, waiting for the Central Tickets outlet to open. Paid for 12 tickets and went home to find out the agent gave me 13! A baker’s dozen! The show was simply amazing and very long! I saw grown men crying during ‘Independence Day.’ " 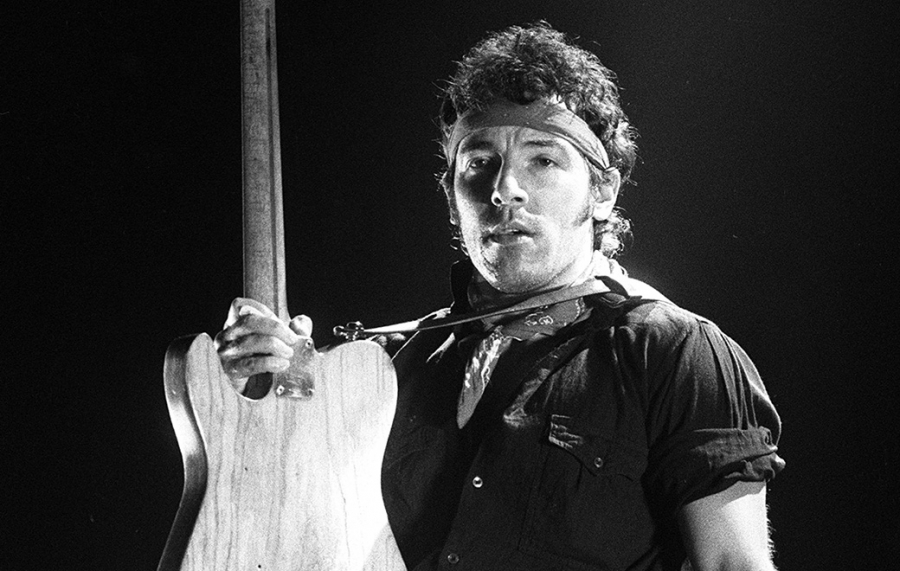 Bruce Springsteen at the Aud in 1984. (Bill Wippert/Buffalo News archives)

Background: Though its early career shows at the legendary Century Theatre on Main Street, in April and December 1974, when singer Peter Gabriel was still fronting the band – form the core of the Genesis-Buffalo love affair, the British progressive outfit did make it to the Aud for four shows between 1978 and 1983. Many who were there recall these concerts as pivotal in the growth of their musical imaginations.

Daniel Riker: "My 17-year-old uncle had an extra ticket to Genesis (in December 1983) and he and his friend brought me, 14, to the show. My dad had the 'Duke' and 'Abacab' albums, but I hadn't spent much time listening to the band. The defining moment occurred during 'The Carpet Crawlers,' when every single person in the Aud sang along with the band. Never in my life had I experienced anything so powerful. Fifteen thousand people singing in unison. Mind-blowing stuff. I still don’t have the words to convey the feelings I had at that moment. A few weeks later, Santa left 'The Lamb Lies Down of Broadway' and 'Selling England by the Pound' under the Christmas tree, and I’ve never looked back. ... I’ve formed incredible friendships with progressive rock fans across the globe. I still am amazed that one brief moment in time 36 years ago in the Buffalo Memorial Auditorium changed so much more than just my musical tastes."

Background: Prince owned Buffalo for two nights in December 1984, as he took over the Aud with his game-changing, sexually charged and, for so many concertgoers, impossible to forget performances, as part of the “Purple Rain” tour.

Jeff Simon, The Buffalo News: “I reviewed Prince. Took my daughter and two of her girlfriends with me. I paid for them. Imagine the acute pain of a 13-year-old girl with her buddies going to see Prince with her dad! While they're all responding to Prince, the omni-sexual rock star, I'm impressed as hell by how bloody wonderful a guitar player he was. You got that on record and in the movie ‘Purple Rain,’ but not a fraction of the way you got it hearing him live.”

Marla Harris, singer: “That was the one. Round, purple velvet rotating bed on stage. That’s all that needs to be said. ... Stellar show!”

Ryan Gellman: “The ‘Purple Rain’ show was a highlight, although I remember people streaming out during ‘Darling Nikki,’ as Prince writhed around in a bathtub that rose up from under the stage, with the house lights on. Buffalo was not yet fully ready for Prince, at that time.”

Erin K. O'Brien: “The No. 1 show – and always will be, no matter how many shows I see in my life – was Prince on the ‘Purple Rain' tour, with Sheila E opening. A religious experience.”

Background: When U2 arrived at the Aud, the band was riding high on an album that many music lovers of my generation considered our era’s equivalent of a Beatles album – the soulful, nigh-on-spiritual “The Joshua Tree.” Though suffering from a cold and a broken arm, singer Bono gave the Buffalo audience an evening it would never forget.

Doug Sitler: “I've attended 500-plus big shows, and the October 1987 U2 concert is still the best concert I've ever seen. I've never experienced a show where the band and audience were both so electric. Even during the set break before U2 took the stage, the crowd was singing every song playing over the PA system as they eagerly awaited the band. ... Of course, no one could forget them playing ‘40’ at the end, and the crowd walking out of the arena singing the chorus of the song. Ten minutes after the show ended, you could still hear people singing it blocks away in downtown Buffalo."

Kevin Telaak: “The ‘Joshua Tree’ tour at the Aud is one I’ll remember forever. Bono’s voice was in shreds. The band, and equally as much the crowd, helped him sing through the entire set. Bono made an effort to thank the crowd and proclaimed it his favorite U2 audience ever.”

Background: The Grateful Dead played the Aud four times (Sept. 26, 1973; May 9, 1977; Nov. 9, 1979; and Sept. 26, 1981) before moving out to Rich Stadium in the later '80s, as demand began to exceed supply. Recordings of all four of those shows have long been revered as top-shelf Dead shows among "tape-traders," particularly the '77 show, with its opening shot of "Help on the Way/Slipknot/Franklin's Tower" offering 25 minutes of peak-period Dead. Interestingly, Buffalo Deadheads unanimously point to the sole Aud performance by the Jerry Garcia Band as perhaps eclipsing Garcia's Buffalo performances with the Dead. Across town on this November 1993 evening, another legendary show was going down – Nirvana was playing what would prove to be its only Buffalo show, at UB's Alumni Arena.

Jason Stewart: "We decided to try the Garcia show first and see if anyone down there had tickets to get rid of. We thought that if we didn’t find any, we could just go to Nirvana instead. We ended up getting lucky and scoring floor seats. We were so excited that, without thinking, we went into the Aud almost three hours early. We were just about the only ones in the building. Who came out early to check his guitar but the man himself, Jerry. It felt like he was playing just for us for about 20 minutes. When he was finished, we yelled and went nuts and he waved to us with a smile on his face. Once the show started, we ended up sneaking down to the floor and ended up about 10 rows in front of Jerry. They played an amazing set that night – 'Cats Under the Stars,' 'Deal,' 'Reuben and Cherise,' along with many great covers. The whole time I was thinking to myself that about eight hours before one of the greatest nights of my life, I had no idea it was going to happen and I’m sure it wouldn’t have been nearly as epic if we decided to go to Nirvana instead. I am fortunate enough to have seen 23 Grateful Dead shows with Jerry, but this was my only Jerry Garcia Band show, and it’s in my top five shows of all time."

[Past & Pints Series: Music history of The Aud panel discussion to be held April 26]