As the local concert scene continues to grow and morph, it’s become increasingly easy to forget about our old friend, the dearly departed Buffalo Memorial Auditorium. The Aud, which closed its doors in 1996 and was demolished in 2009, was a preeminent concert facility during the golden age of the fully produced, hyper-amplified rock concert.

Jeff Miers remembers the old Memorial Auditorium in a series of posts proving the Aud wasn't just a hockey arena – it was an electric church. Here are some of the top concerts the Aud hosted in the '70s.

Background: The British progressive legends played the Aud six times, all during the years that earned the band its status as one of the most imaginative groups of the 1970s. Buffalo was a major market for the progressive rock boom of that era, and many a young mind was was tickled by a Tull show at the Aud.

Rick Battaglia: "Jethro Tull in 1970 was, I believe, the first concert in the Aud after they raised the roof, added the orange seats and hung sound-absorbing acoustic cylinders from the roof to keep the arena echoes in check. I attended with (guitarist) George Puleo. We were both 13 at the time. The two of us came back to see Tull again in 1973. I think we had third- or fourth-row center. The show was prior to the release of 'A Passion Play' by a few weeks. The start of the show was masterful – a photo of a ballerina projected, a throbbing heartbeat sound, slow at first, with a pulsating red light on the projection screen. The heartbeat speeds up as the ballerina slowly moves a finger, then a hand, then slowly stands and starts running, jumping through a mirror, and as she does, Tull suddenly appears on stage and starts into 'A Passion Play.' Just incredible. They played the full album." 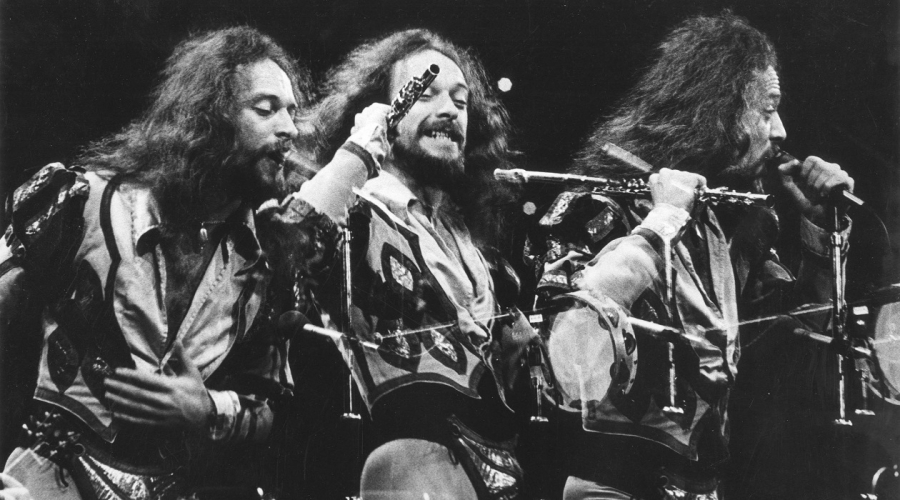 Ian Anderson of Jethro Tull at the Aud. (Mickey Osterreicher/Special to The News)

Background: Perhaps the most influential rock band of the 1970s performed at the Aud twice, and was scheduled to return for a third time when drummer John Bonham died on the eve of the band’s 1980 tour. These shows were the most-cited in the fan survey I conducted.

John “J.P.” Piccillo, 97 Rock DJ: “They were touring their newest album – the fourth album, with ‘Stairway to Heaven’ on it, which had come out in November 1971, so we had a few years to get familiar with the new stuff. We spent $4.50 a ticket to sit in the red seats. They opened with ‘Immigrant Song.’ I couldn't believe Jimmy Page was right there. They were having a good night. ‘Pagey’ was smiling, Robert Plant sounded great, and man, were they loud! It was brilliant.”

Jeff Criden, former Warner Brothers Records rep: “Led Zeppelin (in 1973) was unforgettable. I remember how loud they were and how much passion they had. They were the biggest band in the world then, touring behind their great ‘Houses of the Holy’ album. My 17-year-old self was so excited to see the mighty Zep. I had seen them four years earlier at Kleinhans Music Hall, right after the second album came out. They were much more confident at the Aud in '73.”

Pauline Digati-Tripodi, who later formed legendary Buffalo new wave/ska outfit Pauline & the Perils: “I was at the ’73 Zeppelin show. It was my first concert ever. They played ‘Houses of the Holy,’ among other things. Robert Plant was still able to hit the high notes and he sure did. ‘No Quarter’ in particular was super mystical, and the combination of dry ice and weed smoke made the entire place fill with visible white air. I was 14."

Background: Pink Floyd’s “Dark Side of the Moon” tour has ascended into the area of myth by this point. It’s hard to believe this show took place a stone’s throw from my office window. Did fans at the Aud sense at the time they were seeing a show that would be viewed as a significant historical moment?

John “J.P.” Piccillo, 97 Rock DJ: “We were there to witness Buffalo's first and only ‘quadraphonic' surround-sound concert. This new album, ‘The Dark Side of the Moon,’ sounded like nothing I'd ever heard before. We sat up in the blue seats directly across from the stage. I had seen a few shows up to that point, but this was a bit deeper. It was a real listening concert, with the sound circling the Aud making it an even more intense experience. ‘Obscured by Clouds’ blew my 16-year-old mind.  Then they played ‘Dark Side’ in its entirety. I remember that they didn’t talk to the crowd much. Although I didn't witness when it happened, I learned later, that yes, someone did fall from the upper deck of the Aud that night.”

Mark Yetto: “I was there, and it was one of my first concerts, at the age of 15. Very memorable! Not long ago, I found a recording of the show. I’ve always remembered the way they opened – the lights rising up, the fog, the way they exploded into the opening song, ‘Obscured by Clouds.’  If you listen to the first track on the recording, at 1:47 in, you can hear the crowd go nuts when the lights came up. A very memorable adrenaline rush.”

Background: All told, Zappa played the Aud four times. His final show in the building was memorialized with the official album release, “Buffalo.”

Tom Fenton, musician: “(The November 1974 concert) coincided with my first serious – as in, closings and cancellations – Buffalo snowstorm. The concert was one of the only things not cancelled that day. So, a group of us, with no car, made our way to the Aud from the UB Amherst campus. Only about 3,000 showed up – the most intimate of the many Frank shows I saw. ... Zappa’s band, with Napoleon Murphy Brock, George Duke, Ruth Underwood et al., was awesome. I remember Zappa saying they’d love to play longer, but they were really concerned about everyone getting home safe.”

Killissa Cissoko: "Zappa 1980. I wore my poncho. A real poncho. When Zappa sang 'Cosmik Debris' and asked, 'Is that a real poncho or is that a Sears poncho?' I jumped up and screamed like some kind of crazed hockey fan. I was the only one doing that at the moment. I didn't care. I was in high school at a Frank Zappa concert!"

Background: On Dec. 3, 1979, prior to the Who's show at Riverfront Coliseum in Cincinnati, 11 concertgoers were trampled to death before they made it through the doors, which remained locked several hours after the advertised opening time for general admission ticket holders. The band was not informed of the deaths until after their performance that evening. The next day's Buffalo show went ahead as scheduled. "We lost a lot of family last night," singer Roger Daltrey told the assembled at the Aud. "This show's for them." 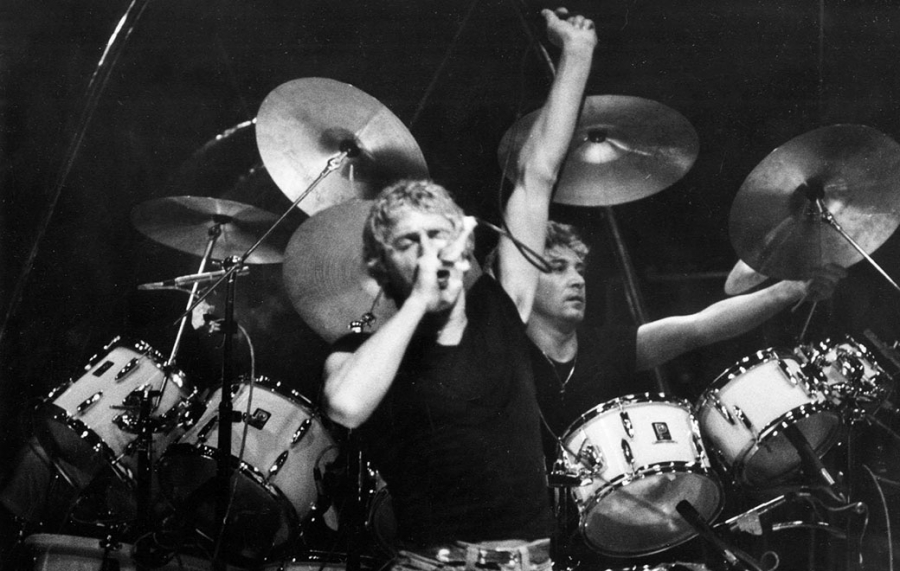 John “J.P.” Piccillo, 97 Rock DJ: "When news came about the tragic events of the night before in Cincinnati, we wondered if they would carry on. You just knew this was going to be one of the most emotional shows this city has ever been witness to. It was emotional, angry, joyous, loud, intense. It was the Who at their best. After three hours of this, both the band and the audience were worn out. After the show, we timidly walked backstage in the event they were up to seeing anyone. Me and my friends just hung out, talked about what we'd just experienced. There were 50 or so reporters from various news outlets around the world who wanted some time with the band. After 20 minutes or so, out of the dressing room comes Pete Townshend. Looks to his left, sees the reporters, looks to his right, sees a group of kids in wheelchairs and opts to hang with them. He sits cross-legged in the semicircle of wheelchairs, and a young man with what I can only explain as a microphone attached to his chair says softly to Townshend, 'Pete, we're so sorry to hear what happened, we know you don't have much time, but we just want to thank you and the band for all the years, and would like you to know how much you mean to us.' To this day, I can still hear Pete say, 'I have all the time in the world for you, mate.' "

40 years ago, The Who show went on in Buffalo after Cincinnati tragedy. Pete Townshend still regrets it.

[Past & Pints Series: Music history of The Aud panel discussion to be held April 26]