Michelle Cloen doesn’t mind the 40-mile round-trip drive to work – especially on days licensed massage therapist Theresa Gantz stops by to address the aches and pains of her and her co-workers.

“This was a big factor of why I said yes to the job,” Cloen, of West Seneca, cracked during her latest turn in the massage chair at Pine Pharmaceuticals in the Town of Tonawanda.

Eighty employees at the 25,000-square-foot plant combine and ship medications for patients who need drug compounds that often are administered through bags, injections and syringes.

Every week, a dozen of those workers stop for a 20-minute massage.

“Most of us spend most of our day at our jobs and you don't want to hate to come to work,” co-owner Alfonse J. Muto said. “It's important to have an atmosphere that's inviting and this is part of that.” 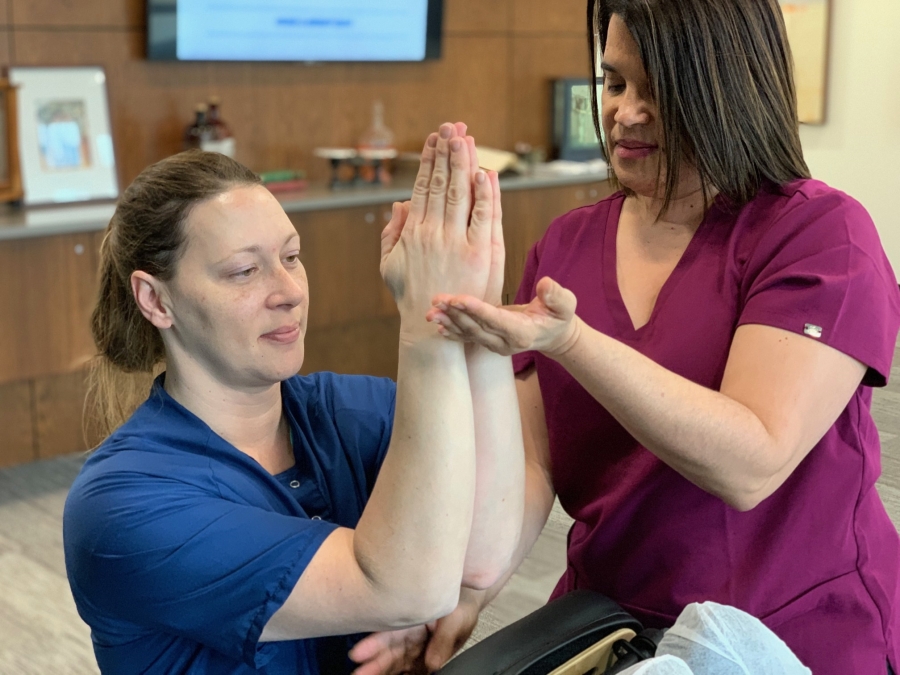 The technique has the potential to revolutionize treatment for musculoskeletal pain, Gantz said.

“It deals with the most primal reflexes throughout the whole body,” she said. “You know when the doctor hits your knee, and your leg pops up? It’s intrinsic, you’re born with it.”

The technique uses a series of taps and flicks on trigger points. It is used by thousands of pain-relief professionals around the world, including doctors, physical therapists, chiropractors, athletic trainers and massage therapists, Gantz said.

“Probably the longest technique takes 12 seconds,” she said, “so it's quite a bit different than a traditional massage. It’s very different but people love it.”

The rest of the time is spent with traditional massage. Gantz stretches and kneads muscles, joints and tissue in mostly the neck, arms, shoulders and back.

“We're manufacturing,” Muto said. “There's monotony. Repetitive motion is a concern. This goes a long way for employee health but also for their well-being and their mindset. They really look forward to their appointment. It puts their mind in a better place.”

Pine five years ago became the first company to bring in Gantz. It hasn’t had a worker’s compensation case since, Muto said, though there is no way of knowing how much the employee perk contributed.

A workplace massage generally costs a bit more to defray travel expenses, Gantz said. Discounts can be offered when considering the number of employees scheduled.

Cloen is a finisher, inspecting and bagging syringes and other finished products before they head to shipping.

“I didn't want her to stop,” she after Gantz finished. “We never do.”