Garrett Leather's products end up in luxurious settings, from private jets and automobiles, to hotels and even the White House.

Everything traces back to a modest-looking plant in Cheektowaga, where the family-owned business moved a few years ago to accommodate its growth. Max Brown, the president, is carrying on the tradition that his father, Cameron, started when he founded the business in 1988.

Garrett Leather generates annual sales of $20 million and has 60 employees. The business has blossomed from its humble origins, inside Cameron Brown's attic. Garrett takes its name from the old English word for attic.

Max Brown said his father had been working at a leather company "that was really at the forefront of the idea that upholstery leather would be purchased by a designer or an upholsterer and shipped to a furniture manufacturer."

"Before that, you had eight or 10 options when you were buying a sofa," Brown said. "The idea of having hundreds and hundreds of options of beautiful Italian leather was brand-new."

Garrett doesn't tan the hides at its Cheektowaga plant. Instead, the company imports hides, mainly from Northern Italy, as well as some from Germany and Brazil. The company has worked with some of the same families in Italy for years, and Garrett representatives visit that country each year. 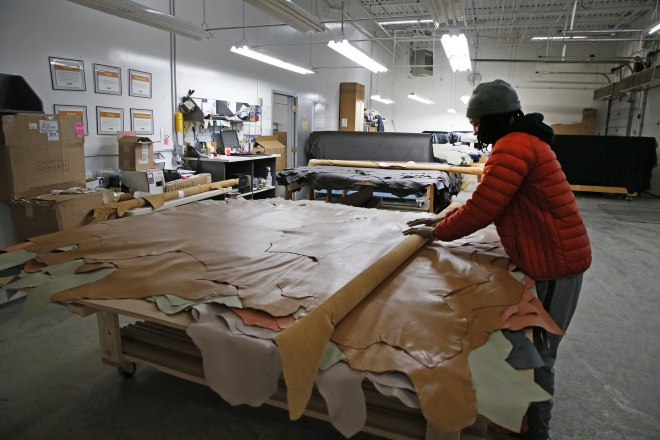 About 45% of Garrett's business comes from the private aviation market. Manufacturers like Gulfstream, Cessna, Learjet and Falconjet use Garrett's products inside their aircraft.

Some of Garrett's products are in the Roosevelt Room of the White House, on furniture supplied to the president's house by another local company, Kittinger.

Garrett is aiming to boost its sales on different fronts.

In one section of Garrett's Cheektowaga operations, employees cut, label and pack sample kits of leather products for interior designers and upholsterers. The company sends out 40 kits a day to clients.

"It's a huge expense to us, but it's the industry standard," Brown said. "They need to see a sample of the exact thing they're going to get before they can recommend it to their design project."

Exports account for only 10% of Garrett's business, but the company sees opportunity to increase that part of the business. Each year, Garrett representatives attend a trade show in Switzerland geared toward the private aviation market. In June, Garrett for the first time will attend a similar show in Shanghai, hoping to tap into aircraft-related sales opportunities in Asia.

Garrett has developed a sales force around the country. Their job is to meet with architects and interior designers, show them Garrett samples and, ideally, get the company's products included on projects.

Once Garrett receives the hides at its Cheektowaga plant, the company inspects them and drapes them over "horses" to prevent wrinkling. Some customers want full hides shipped to them; others need the leather cut to a certain size or shape. The needs vary by customer.

"A client may order one hide to redo a living room chair, 10 to redo a classic Mustang, or 100 of them to do chairs for an entire hotel," Brown said. Before the leather is shipped out, Garrett does a quality check to ensure there is plenty of product for the customer to work with.

As Garrett has grown over the years, so has its manufacturing needs.

Back in 1998, Garrett bought and moved into the former Mentholatum building on Niagara Street. Garrett in 2016 relocated to a plant on Boxwood Lane in Cheektowaga, where the company could operate on one floor instead of on five floors, and with more space. Ciminelli Real Estate Corp. bought and converted Garrett's former home into an apartment building called the Mentholatum.

"We actually have a guarantee for 270 of our colors to be in stock and to ship within two business days, or else we pay the client's shipping costs," Brown said. "We have maybe 10 failures a year. It's been a very good program." 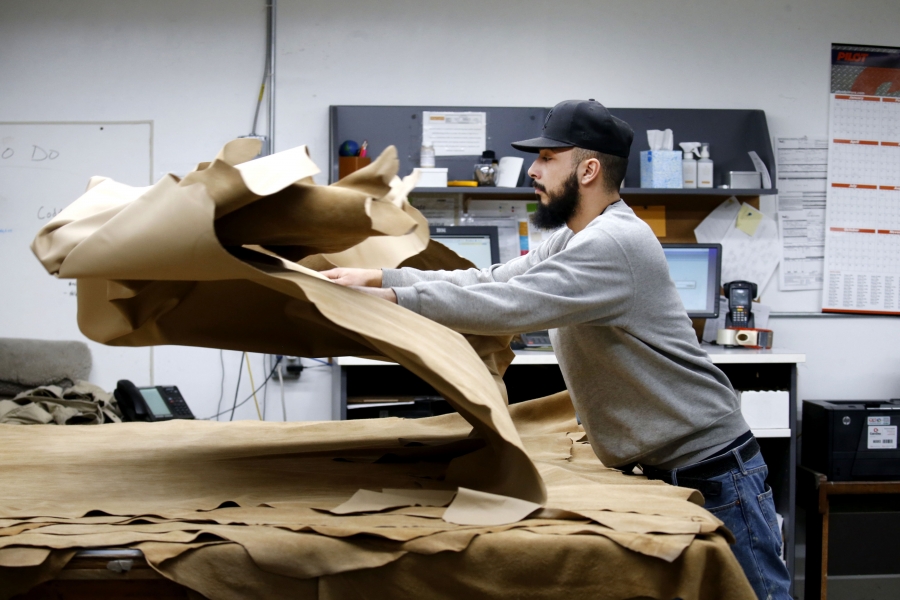 Shipping specialist Tyler Salerno flips and inspects the hides that were specifically ordered to be the surface for seating on a private jet. (Robert Kirkham/Buffalo News)