The lessons you learn for Valentine's Day do not always happen overnight, or in a year, or over many decades. They can simmer and emerge when you least expect to find them, sometimes even as you step into your 60s, and maybe the only hope we have for knowledge in this life is to realize you can never know enough about a story.

So it is with the corner of Albany Avenue and Swan Street, and what it is still teaching me about commitment.

That Dunkirk crossroads, when I was a child, served as a classroom in business, trust and enterprise. It was maybe a quarter-mile east of the steel plant, just beyond the open strip where metal towers carried away the power lines, near a field where generations of kids wore paths through the tall grass.

A city neighborhood, pushing west, rolled up to Swan, a half-block past where my parents rented our house. I used to walk back and forth all the time to a vacant lot where we played pickup baseball, hardly noticing a tiny woman with white hair who was often in the yard, tending to the garden outside her home.

One day, when I was around 12, she walked to the edge of the lawn – clearly nervous about taking such a leap of faith with a young stranger – and asked: “Excuse me. Would you be interested in some lawn work?”

I was in. Like any kid, I could always use a couple of dollars in my pocket, even if I was not prepared for my new boss, whose name was Gladys Mahaney. I doubt she weighed 100 pounds, but she had rigorous standards regarding the way she wanted the grass cut. She taught me the proper method for washing a window - wipe it off dry before you even think about applying water - and with those rules, as the years went past, came some revelations.

In summer, I mowed. In autumn, I raked. In winter, I shoveled. Before long, bit by bit, as I kept showing up, she was telling me pieces of her tale. She had no children, and it turned out she had contracted tuberculosis as a young woman. She was dating her husband-to-be at the time, and the disease put her in a sanitarium and nearly claimed her life.

Her fiancé, a guy named Bill, never stopped coming to see her, and he was waiting when she woke after the surgery that took one of her lungs. The doctors told her then that she probably would not have children, a prediction that turned out to be true, leading to the point she made over a glass of lemonade on a long ago summer day:

They were in their 20s, yet Bill never thought twice. He was there to stay. They were married and found their joy in each other, until eventually she was widowed and left with ample time to think about Bill, whose photo was everywhere around the house. It was during those years that she told me their history, maybe hoping I would take something out of it when big decisions came my way, though it took a while for me to fully understand.

Today, married for almost 37 years, I realize it was only one of the lasting gifts for Valentine's Day that I gained from that corner.

I was out mowing one evening at Mrs. Mahaney’s when a guy walked over from across the street, a slender retiree I had sometimes seen working in his yard who had always seemed to me to be utterly independent – a gray-haired guy as tough as steel, typically in a flannel shirt. His name was Henderson, and he was deep into retirement.

He told me he had always mowed the grass at his own house, before he said – in an admission that clearly galled him – the doctors insisted it was getting to be too much.

Sure, I told him before he had to ask, and now I had two houses on the corner. His yard was bigger and trickier than Mrs. Mahaney’s, but he paid well and at first did not have much to say. After a while, before I left, he would talk for a few minutes. Before long I was also shoveling for him in the winter, and he offered no demand beyond an expectation:

Shoveling a driveway meant cutting the edges and leaving room to get in and out of the car. In all things, if you were going to do the job, do it well.

It was the same ethic, I learned, that he brought to everything, including marriage. His wife, he told me quietly, had been struggling with illness, and his focus had turned into doing whatever he could for her, a major reason he now needed a hand around the yard. I remember him at the door, speaking with intensity of how she was doing, leaving me to contemplate the notion of how he saw them both as one.

Through Mr. Henderson, I picked up one more house. He mentioned one day that the Naetzkers, neighbors across the street, could also use a little help. So I stopped at the door and immediately recognized Mrs. Naetzker – her name was Hazel, which somehow fit her perfectly – who shared a sense of warmth I still remember even as I write these words.

She was familiar to many kids around Dunkirk. Her husband, Ray, was one of the brothers who ran Naetzker’s, a landmark newsstand in Dunkirk where many of us bought our comic books. Ray was a civic institution, a guy who often wore a white shirt behind a counter where cigars were kept in boxes, under glass.

Mrs. Naetzker radiated kindness. I recall, once I was finished with a job, how she would ask about anything and everything in my life, how school was going and what book I was reading and how she noticed just how much I liked to ride my bike.

Her husband, much quieter in all of this, was usually knocking around nearby, listening from the living room. What I could tell, with some kid's instinct, was that the two of them were intensely close.

I grew older, went to college and eventually left town. All those families are long gone from that corner, while my own parents died in the 1980s and my siblings moved away. Still, I drove by those yards recently when I was back in town to do my job, studying the lawns I cut so long ago, considering a piece of news I learned for the first time only in the last year or two. 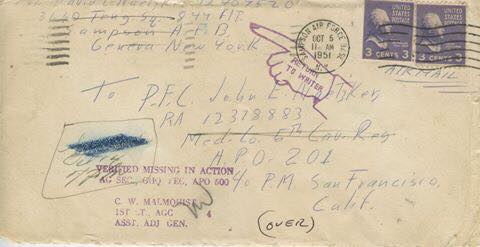 A letter to Private John Naetzker, returned after he went missing in Korea. (Photo courtesy of Nathan Naeztker)

The Naetzkers, I discovered, had a son named John. He went to fight in the Korean War and lost his life. They sent him home for burial at Willowbrook Park Cemetery, not far from where he played childhood football with his friends, maybe a block from where I would mow his parents' lawn years later.

Mrs. Naetzker carried that impossible loss with her until the day she died, choosing to be the kind of person to lift everyone around her, including a kid she barely knew who cleared snow from her driveway.

After a half-century, on Valentine's Day, I hope now I see their point.

Sean Kirst is a columnist with The Buffalo News who is interesting in hearing your own childhood examples of commitment. Email him at skirst@buffnews.com, leave a message after this piece or read more of his work in this archive.