A new development in East Aurora is proving that once a bank, always a bank.

And maybe a little bit more.

The Bank at 649 Main St., the village's first bank when it opened in 1923, is returning to grandeur after a $1 million restoration by East Aurora developer Todd Stine, who will transform the bank’s four vaults, mezzanine and signature skylight into an event center/wedding reception venue complete with bed and breakfast lodging in rooms named after notorious bank robbers.

“It is one of our grander buildings. It epitomizes the excess of the 1920s – bigger, grander, an architectural design to impress,” said Robert Lowell Goller, Aurora Town historian and East Aurora village historian.

Originally called Bank of East Aurora and the next-door neighbor the Blazing Star Masonic Lodge, it helped anchor a new wave of showy buildings that marched onto Main in the early 1900s.

Stine is bringing back the original terra cotta tile flooring and restoring the skylight and crown moldings. He is cutting small holes in certain areas of the floor and embedding coins from around the world.

“The whole place had the character removed from it, but we had the original 1923 plans along with the 1960 plans used to modernize it,” he said.

The night deposit box at the bank’s entrance will be used as a drop box for guests to use for wedding cards. The walk-in vault on the ground floor with an 18-inch wide armored door will become a staging area to present the bride. 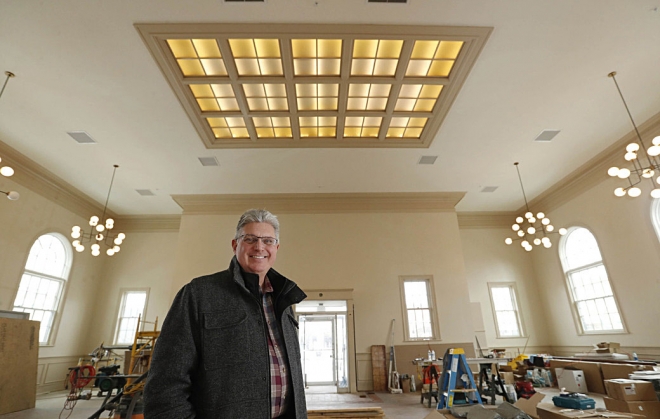 Developer Todd Stine stands under the restored skylight in the the main room of his new event venue in East Aurora. The Bank pays homage to the original 1923 Bank of East Aurora and will include lodging. (Sharon Cantillon/Buffalo News)

“We wanted to give people the impression they are in a working vault," Stine said.

Stine, 59, moved to East Aurora 11 years ago. He was born and raised in Newell, W.Va. and moved to Dallas-Fort Worth, where he operated a tech firm as a young adult. He and his wife have one son. They already own and operate a small B&B called Carriage House at Rushing Waters, also in East Aurora.

Stine, who is semi-retired, sold his Texas tech firm three years ago. This is his first commercial development. It is expected to be open for business on May 1.

Stine learned the aesthetic value of restoring old structures firsthand, making his way to East Aurora after a couple of residential restorations in New Jersey including 1903 house in Lambertville and a 1780, 1850 and 1950 home in Stockton owned by playwright JP Miller.

Stine purchased the East Aurora property for $700,000 from former Moog executive Jay K. Hennig in 2017. It sat for some time before Stine decided on a game plan to develop the 9,163-square-foot, two-story building with a brick facade, columned entry, rooftop balcony and full basement.

He plans to utilize every inch of the structure, even placing a lounge on the roof to “serve as a way for people to get out and hang out on a summer day,” he said.

The 3,500-square-foot area called Beneath the Bank will hold five guest rooms and five public restrooms. The rooms will be outfitted with art deco-inspired décor and named after Prohibition-era bank robbers: John Dillinger, "Pretty Boy" Floyd, "Slick Willie" Sutton, Frank "Jelly" Nash, and Bonnie and Clyde. Two additional rooms, including the bridal suite, will be on the ground floor.

“It’s kind of a touchy thing. If you do much research on bank robbers in 1923, you’ll find they’re not the friendliest people. They were really gruesome people,” said Stine. “Naming a room after them is really just another way to tie into the banking theme.”

Banking touches may be found throughout, such as penny-tile flooring in the vaults, a "bullet-riddled" door and a chalkboard bank directory to personalize events.

One thing the event center will not have is an elevator. Although the original plan called for one, Stine received a variance because the cost of installing one was more than 20% of the total project.

The repurposing of vintage banks is happening more often in communities looking to honor the past while building a future. Spot Coffee on East Quaker Street in Orchard Park was originally First Bank of Orchard Park. The structure was built in 1916 has become a community gathering place.

“When First Niagara and KeyBank merged, this bank branch was closed,” said Goller, the historian. “People were speculating what it could be used for. It definitely represents the 1920s in East Aurora."