Architects hired by Erie County to help select a site for a new Buffalo Niagara Convention Center have zeroed in on a block of Delaware Avenue just north of Statler City.

"It is a big project," said County Executive Mark Poloncarz, who called the recommendation "the most exciting, transformational vision for Buffalo."

After an analysis of three site options, Atlanta-based Tvsdesign recommended building a new convention center on a city block bound by Delaware Avenue and Franklin, Mohawk and Huron streets.

The consultant rejected two other proposed sites: a block of land near KeyBank Center and a proposal to expand the convention center to the Statler City building.

"I’m so excited about this," said Patrick Kaler, president and CEO of Visit Buffalo Niagara. "To me, it checks everything off the wish list we have on a convention center."

How the county would pay for such a project remains a big question. County officials say they first had to zero in on what should be built and where. The next step will be preparing borrowing options and a proposal for state funding. 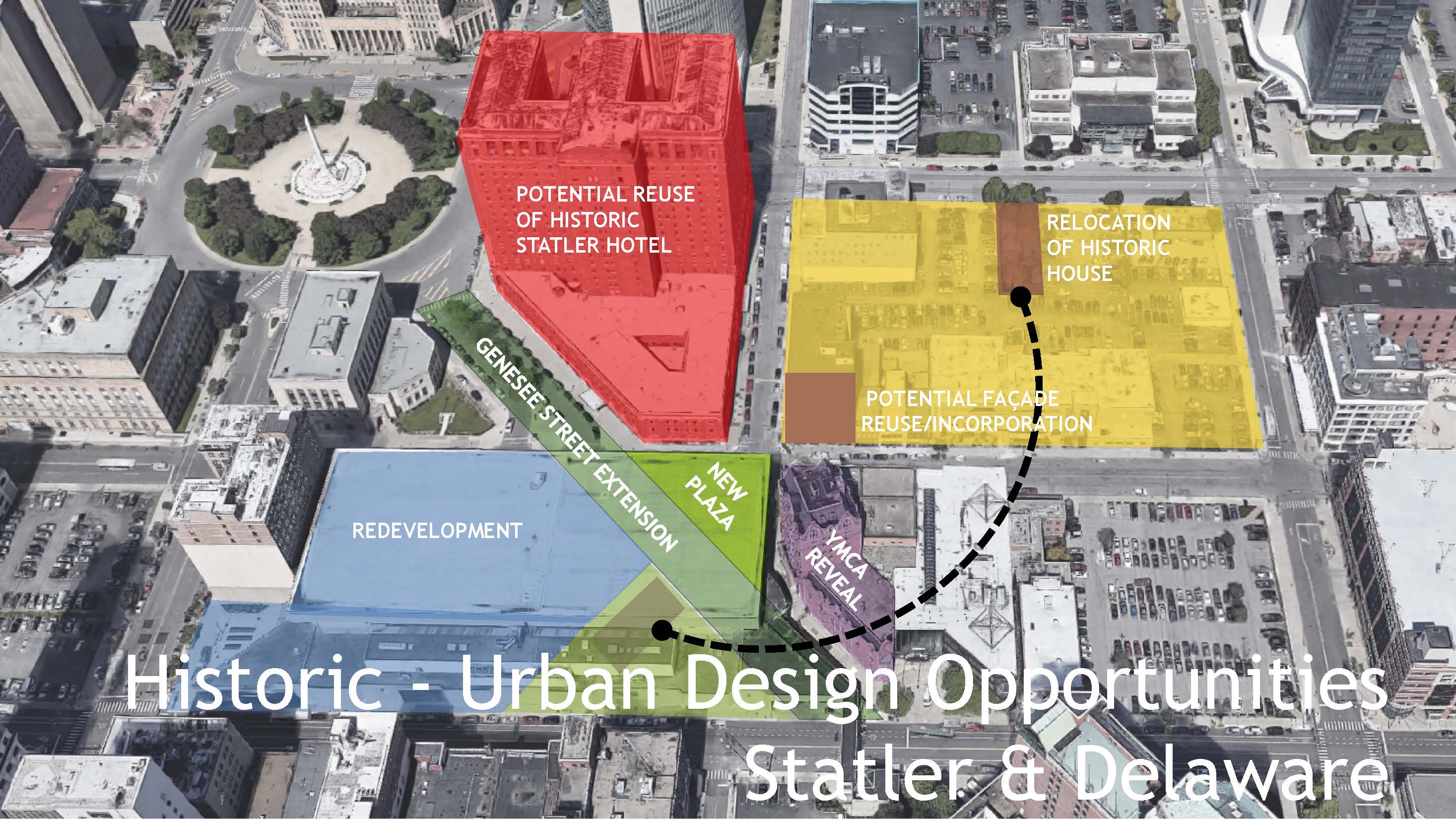 The proposed site of a new Buffalo Niagara Convention Center is shown in yellow. (Image courtesy of Erie County/Tvsdesign)

Tvsdesign recommended the site to the county after studying three site proposals first discussed in 2018: the Delaware Avenue site that originally incorporated a bridge through the Statler and to the existing convention center; the HSBC site near the downtown arena and Canalside; and a proposal by the late Mark Croce, which would have incorporated the rear portion of his Statler City building into a consolidated expansion of the existing center.

After an analysis of all three site options, two of which were recommended by HVS Consulting in 2018, Tvsdesign recommended an alternative version of the Delaware Avenue site. The site would encompass one city block but would not be connected to the existing convention center. 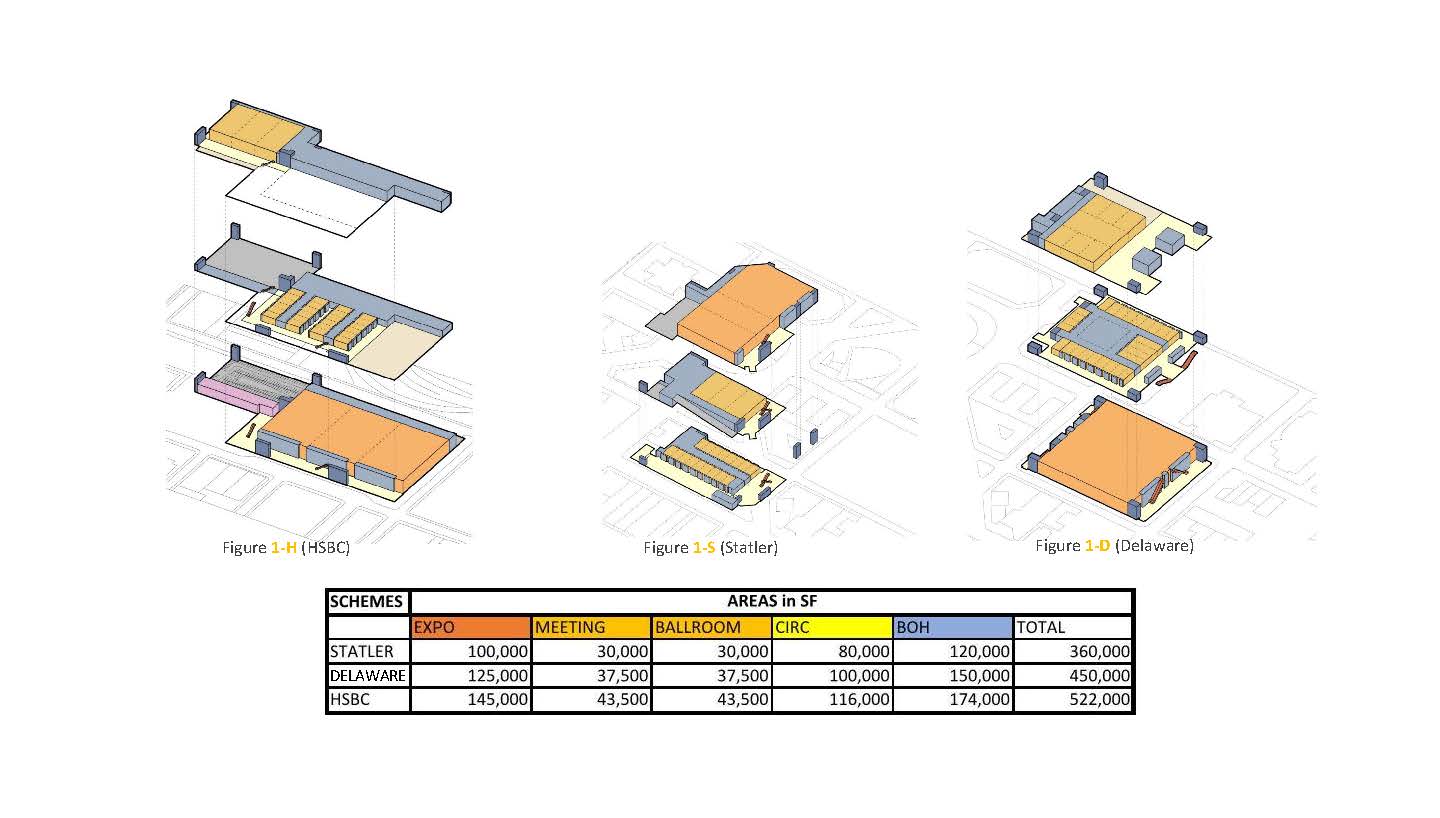 A comparison of the three sites considered by Tvsdesign. (Image courtesy of Erie County)

Assuming funding could be secured over the next two years, construction could begin in 2023 and probably take three years to complete, said county and Tvsdesign officials.

But a long road ahead remains for this proposal. Until funding is secured, he said, the county is unlikely to pursue another design study that would provide more detail on what a future convention center would look like.

Several business leaders reacted positively but cautiously to the convention center recommendation, while political leaders and others expressed opinions ranging from supportive to strongly opposed.

"From what we were able to see initially we felt pretty good about," said Buffalo Mayor Byron Brown.

“It is long since past time to address our convention center," said Keith Belanger, chairman of the Buffalo Place board and an M&T Bank executive. "We need a box that is competitive with our peer cities.”

Paul Snyder, whose Snyder Corp. owns the Hyatt Regency Buffalo, said he loves the site concept. The hotel derives significant business from conventions and meetings. But he's also seen half-dozen convention center proposals come and go over the past 36 years that the Hyatt has been open, “all of which came to no avail because the state opted not to support the project.”

The shortcomings of the existing, bunkerlike convention center have been long known. HVS consultants described the existing center as "functionally obsolete."

"This is a great place to go if you’re a prison," Poloncarz said.

Critics, however, question whether a bigger and better convention center is worth the burden to taxpayers.

Mark Hamister, whose Hamister Group owns the Hilton Garden Inn at Lafayette Square, likes the site concept but questioned if the cost of the project can be justified, given the decline in overall convention business nationally, especially in the northern Mid-Atlantic and Midwest regions. He expressed skepticism that Buffalo can support a new facility and demand with its current infrastructure, and whether the state and county can afford the $442 million cost along with any potential spending on a new Buffalo Bills stadium.

Bruce Fisher, a SUNY Buffalo State economics professor, said the idea of a new convention center has been studied before and found to be an economic dud. It's foolish for midsize cities to attempt to draw major conventions from out of the area when trends don't support that, he said.

"It's a crazy, bad idea," said Fisher, who oversaw an impact study on a new convention center when he was a deputy county executive during the Giambra administration. 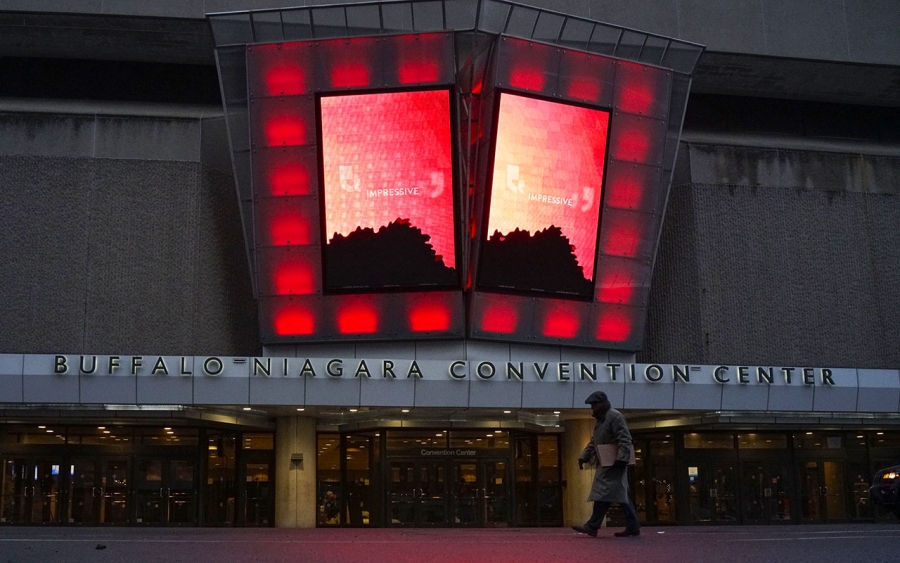 Both sides note that the existing, concrete meeting facility, built in 1978, still does plenty of business, enjoys a high occupancy rate and strong economic impact numbers.

But tourism officials say Buffalo loses a lot of lucrative business. With more exhibit space and modern features, they say, the Buffalo Niagara Convention Center would be able to compete for hundreds more events each year.

Tvsdesign was hired to give county officials the additional information needed for the county to begin the work of getting outside funding commitments for the new center.

Deputy County Executive Maria Whyte said it is too soon to say but that bed tax, parking revenue and state assistance would relieve the local burden.

“The vast majority of the bond would be repaid by the visitor, not by the local taxpayer,” she said. “We will not be going over the property tax cap to pay for something like this.”

Problems at other sites

HVS Consulting originally identified two site options in 2018, neither of which Tvsdesign recommended as originally proposed.

• Option 1: Expand the Buffalo Niagara Convention Center between Franklin Street and Delaware Avenue. This option called for renovating the existing convention center and using the Statler building as a connector to a new facility on the Delaware Avenue block that Tvsdesign now recommends as a stand-alone convention center site. The option called for sky bridges to connect the parcels.

• Option 2: Build one large and contiguous convention center at the HSBC site between Washington Street and Michigan Avenue. This option called for constructing a convention center from scratch near Canalside on land currently used as paved parking by HSBC and The Buffalo News near KeyBank Center.

The original consultants expected Option 2 to be the significantly cheaper option since the HSBC site is a blank slate with no existing on-site development.

But the analysis by Tvsdesign estimated the the HSBC/Canalside location would cost $164.7 million more than the Delaware Avenue site. They cited several reasons for the increased cost, including that it would be a bigger project and that the site lacks the infrastructure and utilities that already exist at the Delaware site. It also has higher environmental costs due to troublesome soil conditions and old underground waterways that are currently covered but would need to be rerouted, said Tvsdesign Principal Robert J. Svedberg.

"Surprisingly, the Delaware site was by far the best value," he said. 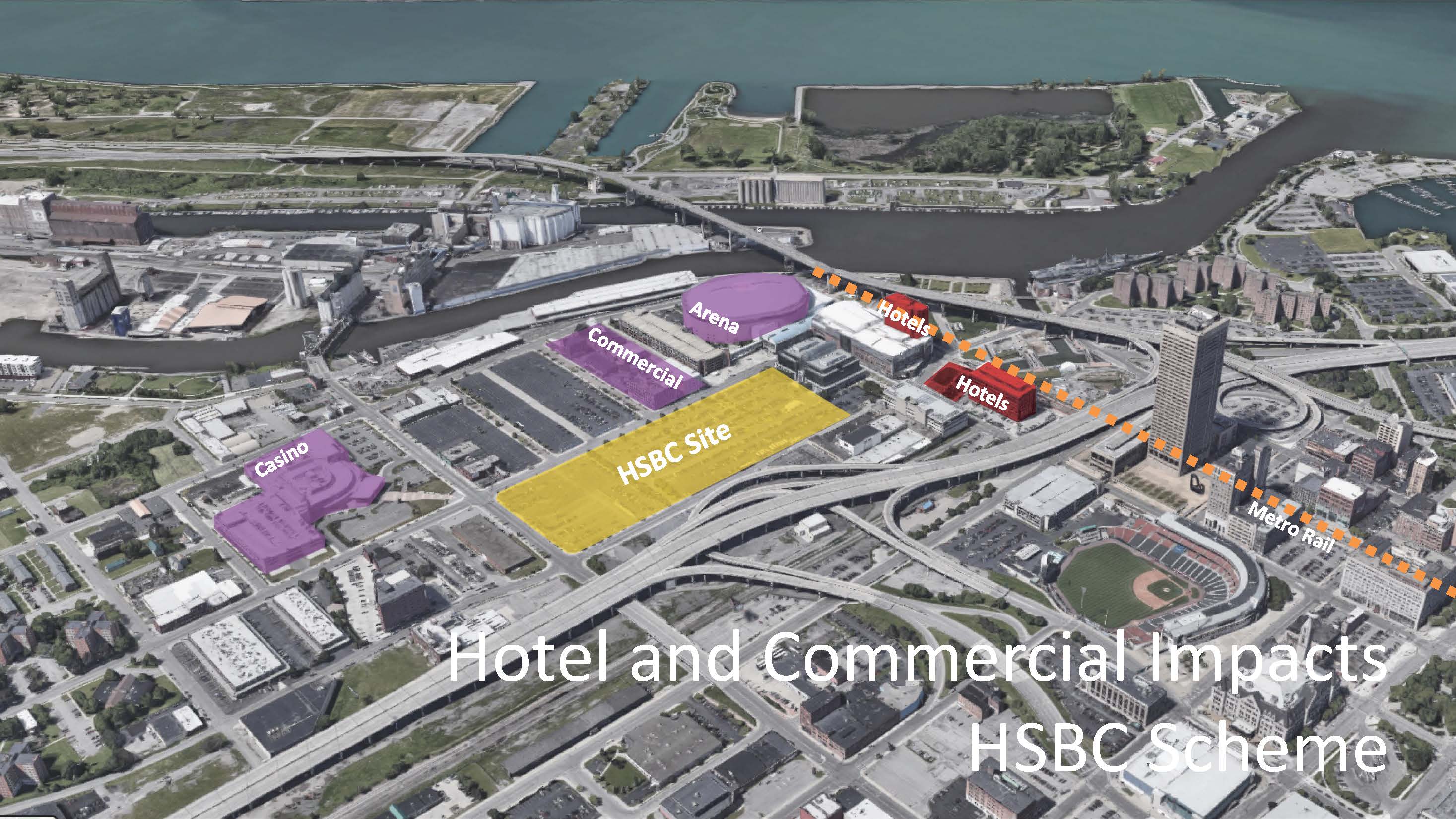 A proposal to construct a new convention center near KeyBank Center was the most expensive. (Image courtesy of Erie County)

Option 1, which Tvsdesign loosely based its recommendation on, presented major design problems. It required the exhibition hall to be located on the second floor, instead of at ground level where trucks would have easiest access to moving material in and out, Svedberg said.

Also, the addition of two sky bridges connecting three buildings would create a disjointed flow. And because the old convention center is too outdated to be renovated in a useful way, it would need to be torn down and rebuilt, Svedberg said. That would require the city to shut down all convention center business for several years until the new buildings could be constructed.

So Tvsdesign focused on the Delaware Avenue block. With a reconfigured layout, the consultant estimated the county could construct a three-level building that would open up more space in the one-block area than originally estimated.

It would also comply with the Buffalo Green Code.

Exhibition hall space could be returned to the ground level, Svedberg said. The existing convention center could continue to do business until the opening of the new convention center. While the exhibit hall space would be smaller than originally conceived by HVS Consulting, Svedberg said the trends regarding the mix between exhibit and meeting spaces has shifted and that a smaller exhibition hall footprint would not be a problem.

Finally, Tvsdesign was asked to consider a proposal by the late Mark Croce, who owned Statler City, to add a level that would extend the convention center over Franklin Street and into the rear of the Statler building. After its analysis, the consulting firm determined that such a design would be structurally difficult, cover a street that the design team would prefer to keep open, and still fall short of the minimum recommended square footage for a new convention center.

Public comment on the project proposal can be offered here until March 14.