Let’s all try to remain civil, even though these number-crunching blowhards keep begging for the abuse.

Even though their analytics-based criticisms of Josh Allen border on disrespecting your family.

Even though these clowns wouldn’t know a real leader if George Washington himself stepped into the huddle. They’d be too busy whining about the way he cut down some cherry tree.

OK, OK, no more insults. Besides, they say it’s not personal.

“It’s not that I hate him as a person. I have no idea what he’s like as a person,” said Aaron Schatz, the head of Football Outsiders and an NFL analyst for ESPN, when asked to defend his criticisms of Allen. “He certainly seems like a hard worker. There’s never been any stories that he’s not. I just don’t think he’s ever going to have the accuracy to be a quality starting NFL quarterback.”

Son of a biscuit.

The man just won 10 games and reached the playoffs in his first full season as a starter. He led game-winning drives in the fourth quarter of five of them.

Sure, he makes mistakes. But he’s only 23. He has plenty of time to improve, and he must improve. Even he admits that. But he was a high first-round draft pick for a reason.

Can’t they see he has a cannon for an arm? He nearly threw the ball out of the stadium.

He’s always one of the fastest and most athletic players on the field.

Remember when he jumped over that linebacker in that blowout upset victory against the Vikings? 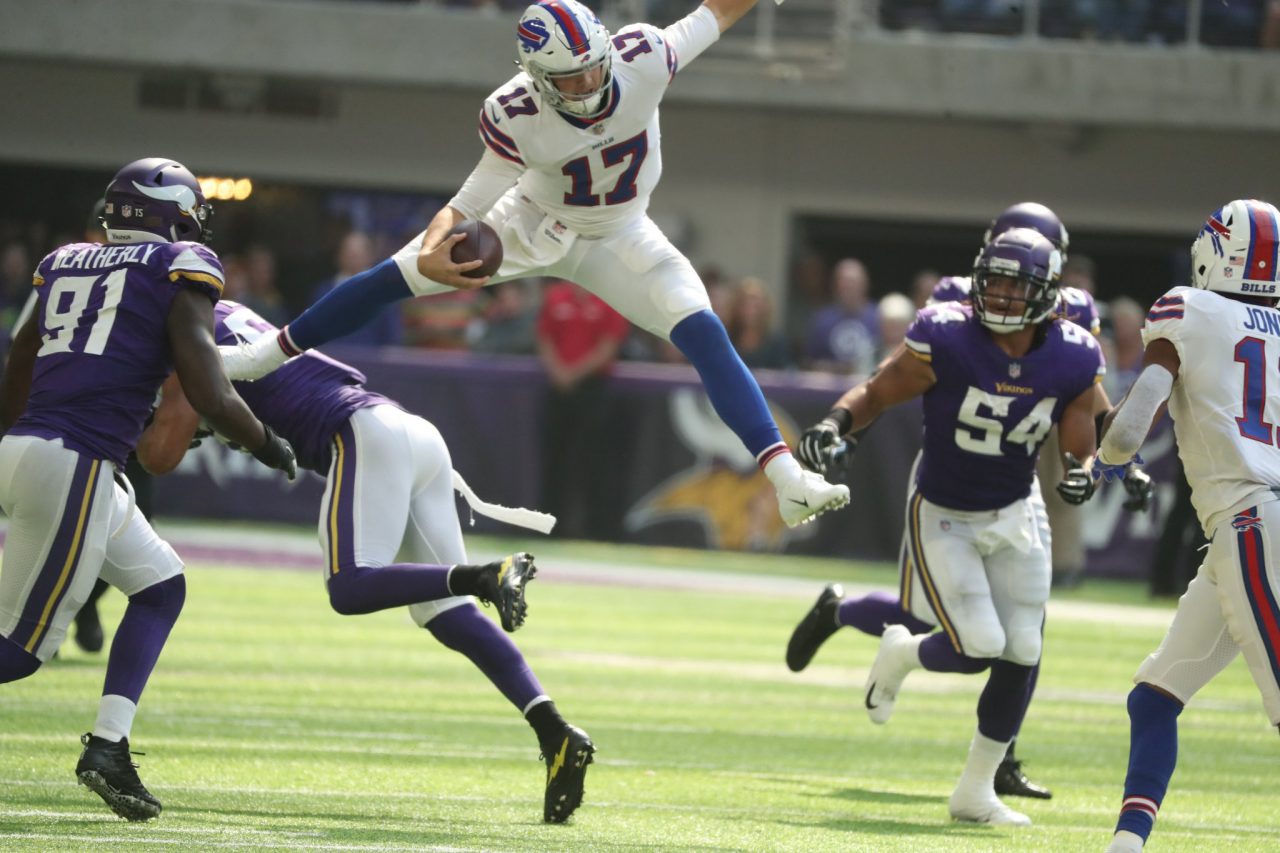 His teammates love him. And so do the fans. He gets this town.

And these nerds have the temerity to question his ability? Based on spreadsheets? And doesn’t Schatz live in New England?

It’s no wonder legions of Bills fans rise up to defend Allen on social media.

“When someone says something disparaging about the team or a player on the team, that to a lot of fans is like insulting their mother,” said Del Reid, one of the founding fathers of #BillsMafia. “So they’re going to come at you. And I don’t condone anyone who crosses a line and is just completely out of line to another human being, if they get into personal attacks or anything like that. But a lot of fans feel like by insulting Josh Allen, ‘Hey, that’s my team’s quarterback. You don’t insult my team’s quarterback. You don’t insult my mother. You don’t talk that way about my sister. It’s one thing if I say something about my brother, but you better not say a word or I’m there to defend him.’ ”

That guy from Ireland, Sam Monson, is clearly biased.

(The Buffalo News, like many media outlets, often cites PFF grades and analytics, and the company counts all 32 NFL teams as clients.)

Lead analyst? Does he even know the difference between football and fútbol?

Does he even watch these games?

He’s always trolling Bills Mafia. And then he has the nerve to block you on Twitter?!

“I think they’re definitely one of the more aggressive fan bases out there,” Monson said, “but I think there’s a lot of them. … I’ve found Panthers fans that are some of the most aggressive and easily triggerable. Obviously, Bears fans have gotten [upset] because of all the stuff we’ve said about Mitch Trubisky over the years. Giants fans think we hate them because we don’t think that Daniel Jones is a particularly good prospect. It’s all directly connected to whether you say anything bad about a player that they have all this hope tied up in.

“I actually started keeping a little chart this year of all the 32 NFL teams and putting a little check mark up next to them if I manage to [upset] one of their fan bases on social media and see if I can work my way through the entire league, just over the course of analyzing the NFL season.”

Bills fans rate among the touchiest, he said. But many say his takes make no sense.

Baker Mayfield took HUGE step back this year. All his negatives were magnified, all his positives became less frequent.

He was a shell of the potential we saw as a rookie.

He was still better than Josh Allen

"Baker Mayfield took HUGE step back this year," Monson tweeted this week. "All his negatives were magnified, all his positives became less frequent.

"He was a shell of the potential we saw as a rookie.

"He was still better than Josh Allen."

He can’t be serious.

Can’t he see Allen was surrounded by less talent than the Browns’ quarterback, who had Odell Beckham Jr. and Jarvis Landry and Nick Chubb and Kareem Hunt? 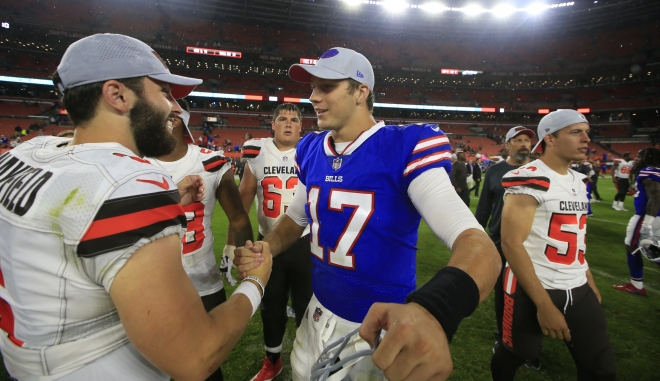 “I've never really taken much issue with the criticisms when they're warranted!” Leslie Wille, a co-founder of #BillsMafia and the nonprofit Buffalo FAMbase, wrote to The News in a direct message on Twitter.

She’s attempted to promote kindness and civility when it comes to the “onslaught of personal insults” surrounding political discourse, among other disagreements on social media.

“If [Allen] has a bad game, and then you see an analyst say, he had a bad day... Am I jumping down their throat about it? Absolutely not,” Wille wrote. “You can be supportive of the team and the players and still acknowledge when things might go off track a bit. Does that make sense?”

Monson said his point of view makes perfect sense, that PFF tracks every snap of every player in every game and issues grades accordingly and dispassionately.

He said he puts less stock in turnovers than “turnover-worthy” plays, explaining that a pass bouncing off a receiver’s hands and into the waiting arms of a defensive back doesn’t reflect as poorly on a quarterback as an off-target pass that a linebacker dropped.

Allen ranked among the worst players in the NFL in this category last season.

“You get people who object to that as a concept, because it didn’t actually happen,” Monson said. “Well, it didn’t, but if you factor in all those kind of things, you can actually predict what’s going to happen better, and therefore you get a better picture of how these guys are actually playing. If you just ignore it and you live with the chance results that skew the picture, you just end up in a different spot, in a wrong spot, in terms of understanding how good these players are or not.”

Of course, PFF is the same outlet that didn’t rank All-Pro cornerback Tre’Davious White among its top 101 NFL players. The site acknowledged that White was its "most controversial omission." The reasoning, according to PFF: White ranked 26th in yards surrendered per snap and 39 other corners allowed catches at a lower rate in coverage.

“PFF is lower on Josh Allen than Bills fans obviously are, so any time we bring up anything that makes reference to that, it’s going to set all of Bills Mafia going insane,” Monson said. “And once a couple of these things happen, it starts to snowball. So now it’s, ‘Oh, PFF hates Tre’Davious White and Josh Allen.’ And every time you post anything, it’s just, ‘Well, you guys are just trolling Bills fans,’ and the whole thing spirals.”

Of course, he knows when he’s poking the bear.

Benjamin Solak, a senior analyst for the Draft Network, said this clash between Allen’s fans and the analytics community was inevitable, and it has nothing to do with the Bills or Buffalo.

“I think the issue is exacerbated right now because Josh Allen was a huge hot button issue for the draft Twitter community,” Solak said, “and then whatever team he went to, Buffalo or otherwise, was going to have a lot of people fall in love with him, a lot of people start defending him, and they were going to go right up against the same people who when Josh Allen was in Wyoming, wrote about Josh Allen never being a good pro. No matter what, that was going to happen.”

But Schatz said there’s “something different” about the way that Buffalo fans have reacted to criticism of Allen compared to the fans of other teams that were “really defense-focused and had a below-average quarterback.”

He cited the Jaguars with Blake Bortles and the Bears with Trubisky, saying that each fan base came to terms with their quarterback’s limitations.

“He’s actually been better in the NFL than I expected,” Schatz said of Allen, which Football Outsiders once described as a “parody of an NFL quarterback.”

“He came out this year around what we would consider replacement level, like a typical backup level, which is honestly better than I thought he would be. And he’s a little better than that, if you include his rushing value. But I just don’t think he’s ever going to be an above-average NFL starting quarterback.

“Buffalo fans have a really hard time with that idea.”

The "Bills Mafia" moniker traces its origins to 2010, when a handful of Bills fans used Twitter to troll and were blocked by Adam Schefter, after the ESPN reporter criticized Stevie Johnson for dropping a potential game-winning touchdown pass in overtime against the Steelers.

The idea of “Buffalo against the world” is ingrained.

“But I think when you swing too far to that end of the spectrum, I think you end up looking foolish, because all the stats in the world, all the data in the world, I don’t think can quantify adrenaline and the grittiness that a player might have in the midst of a professional football game. That’s something you can’t really put a number on. Football and sports in general aren’t played in a test tube.”

And whether Allen is a franchise quarterback won’t be decided on Twitter.