Sal Buscaglia will turn 66 on Valentine’s Day, but the retired coach has another reason to celebrate.

Thursday’s celebration at Mercy Hospital of Buffalo was as much a tribute to the medical care given Buscaglia as it was his way of thanking everyone responsible for saving his life.

Buscaglia, a Greater Buffalo Sports Hall of Fame member and longtime coach at the University at Buffalo and Hilbert College, suffered a “widowmaker,” a massive heart attack that blocked his heart’s main artery. He was in a coma for six days.

Buscaglia had spent part of the afternoon at a reception for the 2019 inductees to the Greater Buffalo Sports Hall of Fame. The veteran coach knew some of the inductees, including Dorothy Jones, a McKinley High School star who went on to Louisville for college and who he coached in the Empire State Games.

"I wanted to congratulate her,” Buscaglia said. 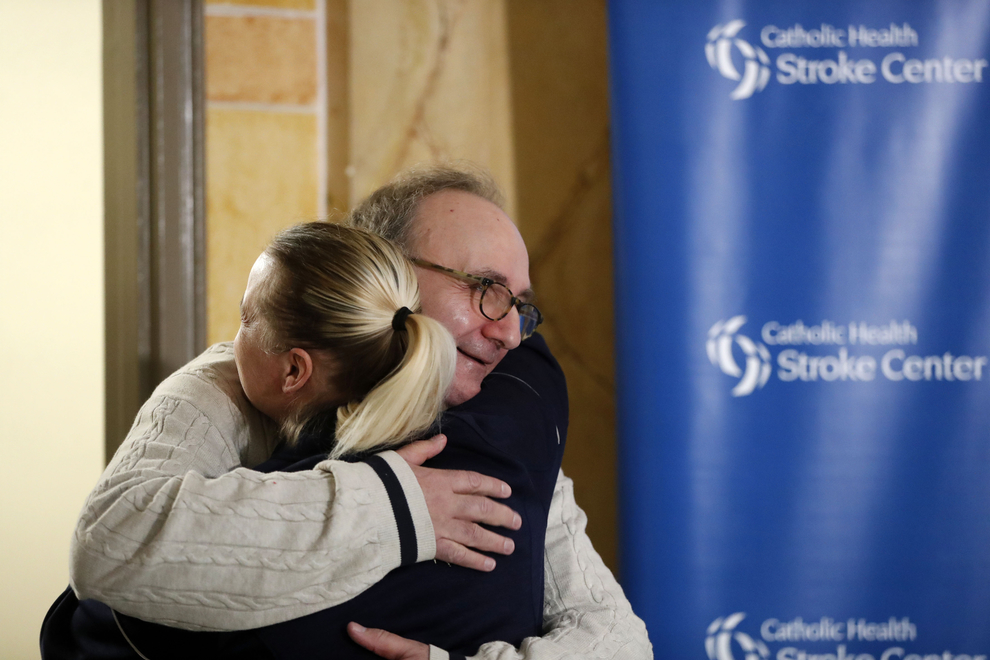 Buscaglia has no memory of attending the event or the events that transpired after, but he called his wife on the way home and told her he wasn’t feeling well, she later told him. The two were on their way for help when his heart stopped.

Firefighters discovered the car at the corner of Girdle and Rice roads in Elma early in the evening on June 4, 2019, recalled Ryan Nolan, chief of the Jamison Road Volunteer Fire Co. “My brother pulled him out of the car, and I started CPR on the side of the road,” Nolan said.

Buscaglia would later admit that he was a playbook example of poor health.

“I was an active coach, worked 16-, 18-hour days, seven days a week. When you’re a college coach, that’s what you do. The lifestyle is hectic. I was very passionate. Winning is a very important part of keeping your job,” he said.

He coached most of his 39 years in Division I women’s basketball. He started at Hilbert, went on to the University at Buffalo and Manhattan College before retiring from Robert Morris University in Pittsburgh. Wherever he was, Buscaglia capped his workday in the much same unhealthy way, he recalled: with fast food, high in fat and low in anything healthy.

"That’s the type of lifestyle I followed as a coach. I never had a clue that it could kill me," he said.

A healthier and grateful Buscaglia has learned a lot from his near-death experience. Foremost is that if not for the skill of first responders, doctors and nurses, he would not be around to celebrate Valentine's Day, his birthday or anything.

"People say I was lucky," he said. "I consider myself blessed."