A couple more quick hits from winter will be arriving after the dinner hour and into Thursday. From the pattern we’ve been seeing in this unusual winter, the hits have all been quick and mostly widespread snow rather than numerous narrow bands of lake-effect snow. Tonight’s snow should hold off until the evening commute has wound down, as depicted in this high-resolution model.

By around 9 p.m., steadier snow will be pushing northward through the Southern Tier. Come midnight, the steady snow will have moved up to the Niagara Frontier. A few patches of dark blue indicate some brief periods of heavy snowfall rates.

There is some relatively good news for the start of the morning commute. Coverage of the snow will be diminishing, and the rate of snowfall will be light at around 6 a.m. There also will be insufficient wind for any real blowing snow.

Overnight snow accumulations should be in the range of 2 to 4 inches. Presumably, the plows and salters will have been out there by then, making for a slow but manageable, slippery commute.

The overnight European/ECMWF is in good agreement with lighter snow for the morning commute, and with steadier, heavier snow toward midnight tonight. ECMWF amounts are nearly identical to the high-res model above.

The light snow will continue to diminish into the early afternoon. But a cold front and a disturbance will bring a little burst of briefly heavier snow later in the day, during the evening commute. Both the high-res National Weather Service model and the less-detailed ECMWF have the timing on this secondary burst as very similar. Although it won’t be very windy, this narrow band may take on a squally character late on Thursday afternoon as it drops to the south across the region. This burst will be the outer marker for the frigid air mass, and temps will be falling later tomorrow.

Snow totals by later Thursday evening look to be in the range of 4 to 6 inches with a few locally higher amounts possible on the hills. As temperatures take a dive, the late afternoon snow will be lower density and fluffier, which is good news for skiers: 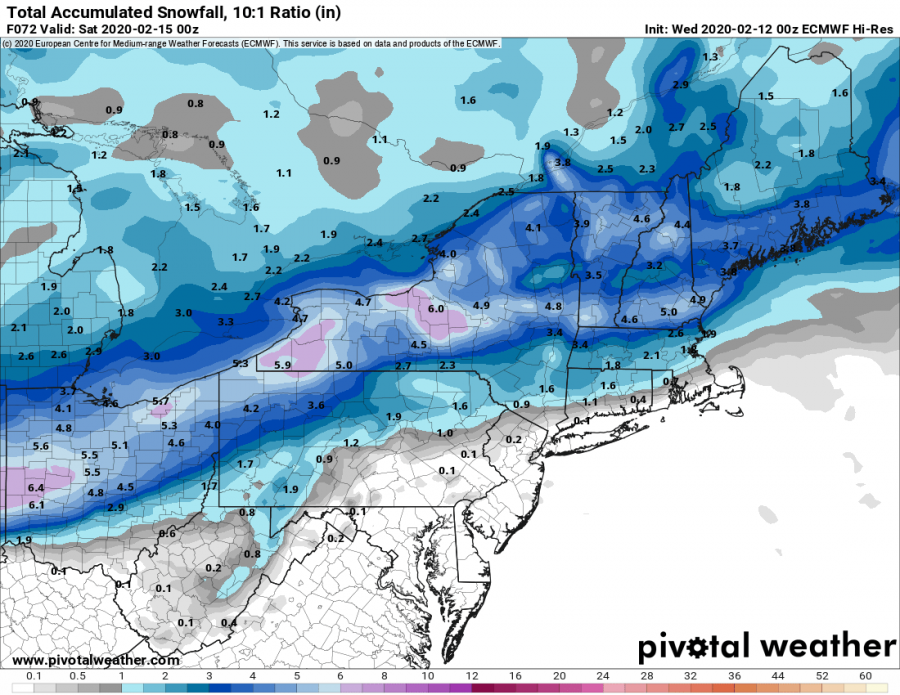 Friday morning lows will be in the single digits. With the lake wide open, you might assume there’s some big lake-effect potential in the offing. However, models show lower levels of the atmosphere will lack sufficient moisture to make much lake snow.

The winds will be more southwesterly toward and into Saturday, so we’ll have to monitor lake snow potential. By Saturday, the temperatures aloft will be warming so that, too, should reduce lake snow potential. We should edge back up to near the low 30s on Saturday, though the breeze will pick up and put quite a bite in the air. There may be a few snow showers or even mixed showers both days this weekend.

As for the longer term pattern this month, there are no signs of a fundamental, lasting pattern change to an extended wintry period. My friend and colleague, Eric Fisher of WBZ in Boston, posted the pessimistic (for winter lovers) surface temperature pattern for the remainder of the month in the ECMWF  ensemble:

Will still sneak in some snow and chill for but all intents and purposes it looks dead. pic.twitter.com/Fj8VLGDTPB

Fisher noted the extraordinarily warm phases for three key oscillations that play a large part in winter weather over eastern North America, including the North American Oscillation/NAO and the Arctic Oscillation/AO. Simply put, you can still get snow and brief cold with these phases, but you can’t get a lasting wintry pattern change. Long range specialist Judah Cohen also pointed out the projected strength and far north location for the polar vortex in the American/GFS ensemble. As I’ve written several times, we know a strong polar vortex that spends most of its time closer to the North Pole keeps the polar air mostly bottled up at the high latitudes.

The coming snow will be more than a minor nuisance, but it bears no resemblance to a knockout punch.