The curtain rises on director Timothy Sheader’s “Jesus Christ Superstar,” Andrew Lloyd Webber and Tim Rice’s rock-gospel musical, as if for an opera.

Dark shadows, immense set pieces, a foreboding stirring of strings. An actor signals for the troops to gather. A youthful, physically fit, diverse ensemble rushes down the aisles and onto the stage for the calling. We are about to witness a moment.

This is the first of many tableaus Sheader sets before us in the 90 minutes (without intermission) that follow. A slideshow of reimagined biblical scenes – millennial Jesus in the neo-industrial age.

It’s not what you might expect from the “Jesus Christ Superstars” of eras past, on stage or screen. This 50th anniversary tour, which opened Tuesday at Shea’s Buffalo Theatre and runs through Sunday, is gorgeous to watch. If it were permissible to post to Instagram from your seat, you would have a field day. Thank goodness that’s not an option. 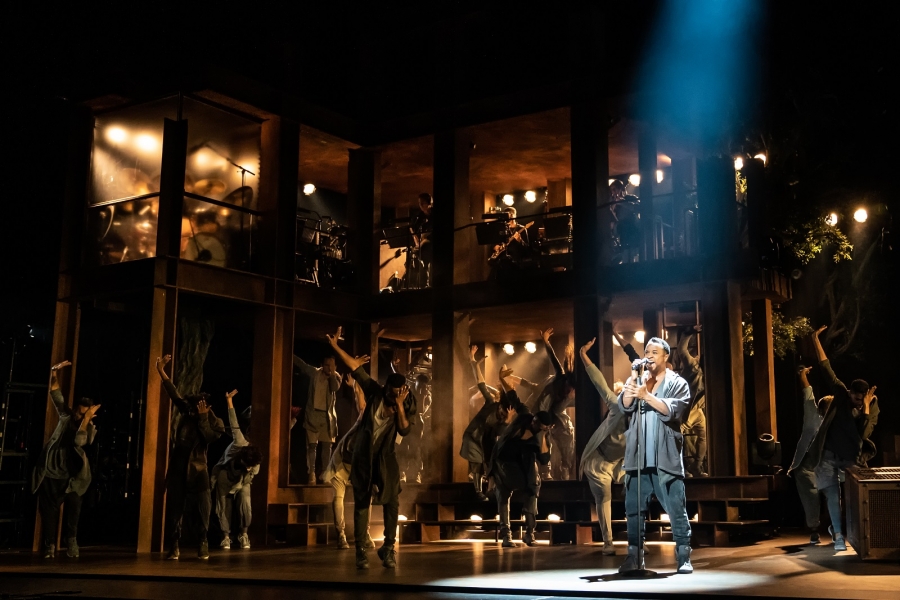 There is much to interpret in this, a gospel-inspired retelling of Jesus Christ’s last days as told from Judas’ perspective. In lieu of a more explanatory libretto (and left with Tim Rice’s simplistic lyrics, written in the infancy of his career), we are open to view and process this tale in our own way, like we often do with Shakespeare.

It is one of Webber’s best scores, and one of an early string of shows that catapulted him and Rice to theatrical fame. If “Joseph and the Amazing Technicolor Dreamcoat” is a juice box, “Jesus Christ Superstar” is a long glug of wine. (“Evita,” a stiff drink.)

There are plenty of political interpretations to be made from the piece overall (which we won’t get into here), but you can start to find a perspective in designer Tom Scutt’s impressive, probing set. A three-level structure of thick metal girders and architectural framework, torn apart by a large fallen cross. Is it being built, or has it been neglected to death? It might represent our institutions, our democracy, our exploded structures that shield us from the world.

Behind this, elegant trees have sprouted through the carnage, a sign of hope and rebirth. It looks like a production at the famed Delacorte Theatre in New York’s Central Park, where nature winds its way onto the stage with poetic inevitability. That dance of darkness needing light. 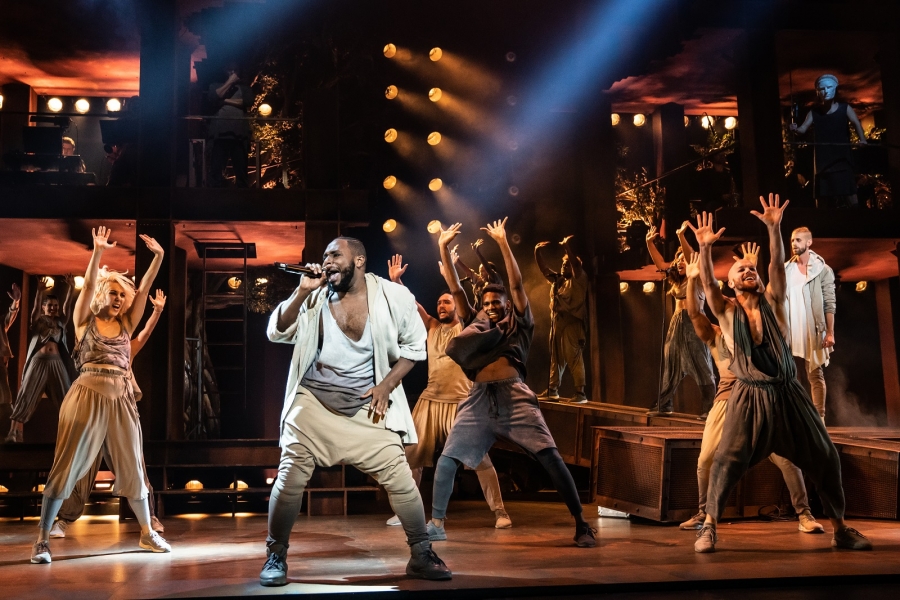 Drew McOnie’s choreography in the 50th anniversary version of "Jesus Christ Superstar" could stand alone as a dance piece. (Photo by Matthew Murphy)

Drew McOnie’s glorious choreography infuses even more life into this wreckage. Using a contemporary blend of jazz and modern dance, he fills the stage with something untouchable, an internal monologue or emotional question. When a group of backup singers gathers around Jenna Rubaii as she performs Mary Magdalene's iconic “Everything’s Alright” number, they do so with romance, like a scoop of moon. Luscious ideas everywhere. The production’s physical staging could proudly stand alone as a dance piece.

But the heart of the show – Aaron LaVigne as Jesus and James Delisco Beeks as Judas  – felt lacking the same drive. Even if their voices were well-positioned for a guitar-rock score, they lacked the theatrical projection required to fill an auditorium (of Shea's massive size, no less) with body, timbre or heft. Their movements were at times so awkwardly minimal that I wondered where else they wished to be.

Yes, the sound mix left nearly everyone’s vocal with a thin, hollow whisper, something that’s out of the performers’ control. But even in Shader’s stark, still-life staging, they felt lifeless, emotionally immobile – as if there to perform the songs and not the roles.

Rubaii better accesses her resources as an earthy, understanding Mary Magdalene's; her “I Don’t Know How to Love Him” was moving. Alvin Crawford provides a deep-voiced anchor as Caiaphas, and Tommy Sherlock’s Pilate is riddled with conflict.

A production worth your time, certainly, but perhaps a lackluster way to celebrate 50 years of such an iconic piece of theater.