It's been a mild winter, by most accounts. Chautauqua Lake is frozen, but the ice is not too thick. And in Mayville, that could mean no ice castle for this weekend's President Day Weekend Winter Festival.

But instead of letting it go, organizers looked to the sky, and then to the parking lots.

And they made the castle out of snow.

The lake was not cooperating by making a lot of ice. It is covered now, but the ice was about 5 inches thick, which is not thick enough to cut slabs for the ice castle, said Nick Andriaccio, who has been volunteering on the castles for years.

But about 120 inches of snow have fallen in Mayville so far this year, according to the village website.

While the festival started in 1987 in homage to the ice industry, when there's snow, make snow castles.

"We didn't think we would be able to do anything," said Jacquelyn Sasso of the Chautauqua County Chamber of Commerce, which sponsors the winter festival. The festival committee had been meeting weekly since October. 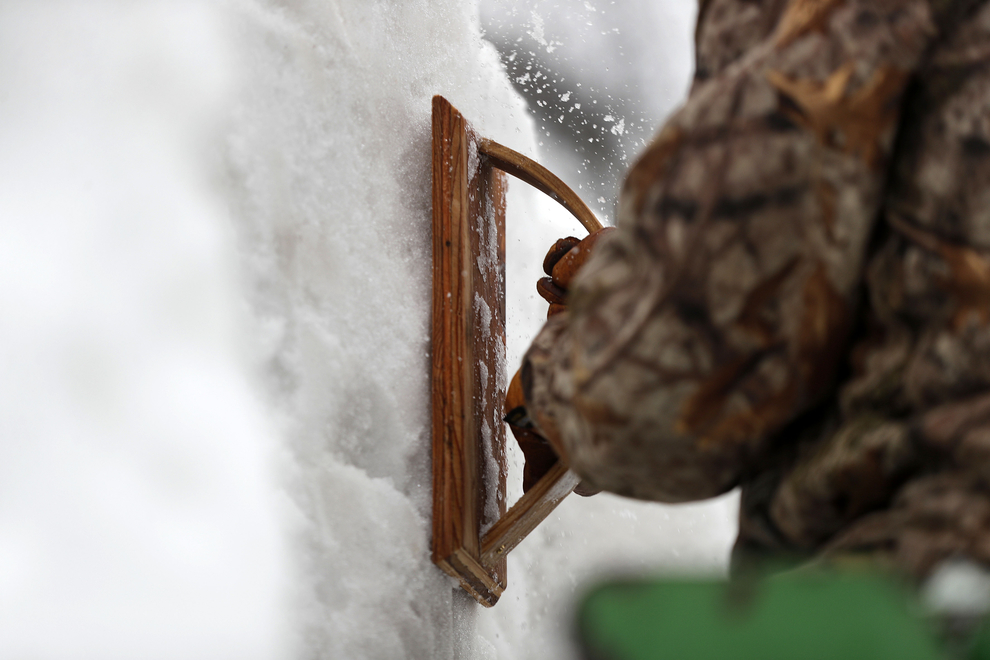 Nick Andriaccio uses a homemade tool to give the castle a stone look as volunteers construct the ice castle for this weekend's annual winter festival in Mayville. (Mark Mulville/Buffalo News)

"It didn't look good, with the mild winter," Andriaccio said. "About eight weeks ago we had our first snowstorm."

So he asked Mayville Public Works Superintendent John Buxton if he could obtain virgin snow, without road salt or sand in it. Crews ended up piling up 15 to 20 dump truck loads of snow taken from parking lots and trucked to Lakeside Park where the festival is held.

"We let it sit for three to four weeks," Andriaccio said.

In the meantime, he searched snow castles on the internet, and how to form ice cubes with plastic totes. Then he got the crew together, about 10 volunteer castle builders he calls the ice men.

"It's pretty impressive. It's actually bigger, "Andriaccio said. "It's probably one of the biggest we've had."

The volunteers, with help from students from Erie 2-Chautauqua-Cattaraugus BOCES and Chautauqua Lake Central School District, got to work. "Construction" started Feb. 2, carving the castle from the hill of snow. Students filled the totes with snow and water to make giant ice cubes to place on top of the walls. Shovels, chainsaws and some handmade tools helped form the snow. 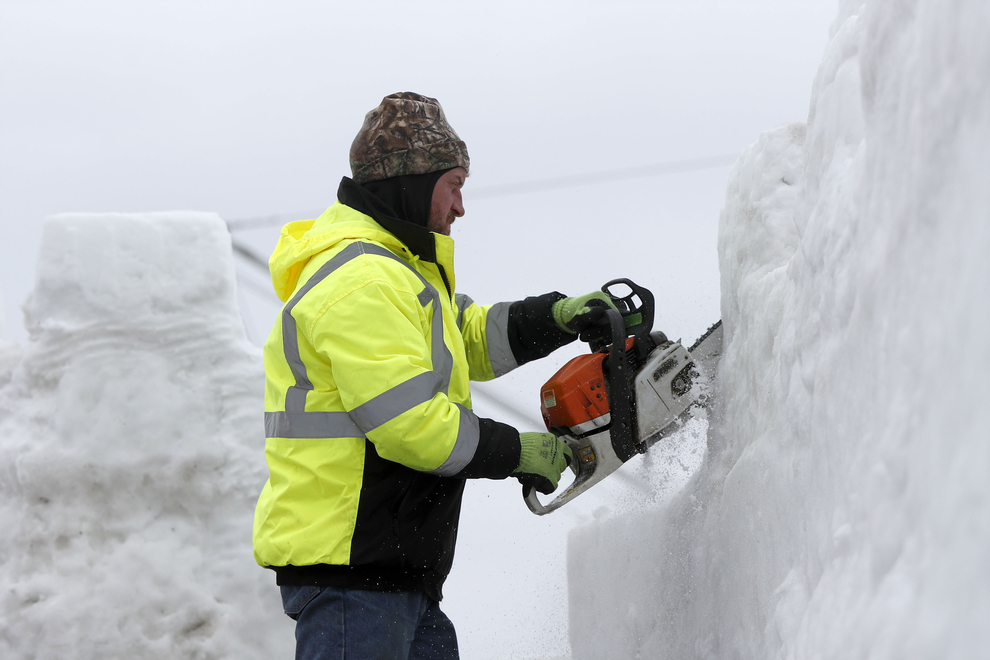 Crist Detweiler cuts into the side of the snow/ice castle. (Mark Mulville/Buffalo News)

Local merchants have chipped in, and restaurants took turns supplying lunch to volunteers.

Carving the snow has proved less taxing than sawing 4-foot-long blocks of ice from the lake, floating them to shore and using a crane to lift them onto the castle.

There were a few years when the weather would not cooperate, and there was no ice castle, and one year where it collapsed during a thaw a few days before the festival.

But this year proved "if we have the snow it will always happen," Andriaccio said.

The festival opens at 6 p.m. Friday with the lighting of the castle at Lakeside Park on Route 394, followed by the crowning of the festival king and queen and a "Queen of Hearts Ball" inside the heated beer tent. Events continue Saturday and Sunday, including the annual polar plunge at noon Saturday and 5K race at 10 a.m. Sunday. Food trucks are among the additions to this year's festival.