It’s a free fishing weekend in New York on Saturday and Sunday. Take advantage of it and go fishing with a friend.

For the tributary action, the warmup has put fish on the beds, and we are getting the drop backs starting to push down, according Danny Colville with Colville Outfitters in Hamburg. He reports that some fresh fish are coming in smaller pods. For drop backs, Colville likes using small jigs or minnow patterns. For fresher fish, BnR soft beads in the "lucky" color in 8-, 9- and 10-millimeter sizes have been the ticket. He also likes a 3.5-inch worm on a jig head because they mimic so many different things and make steelhead bite out of hunger or aggression. Let the fish spawn and focus on the deeper spots where you can't see them. They will be much better bites, according to Colville.

Lower river action was excellent this week as conditions were near perfect if you were fishing from a boat. Capt. Chris Cinelli of Grand Island reported excellent water as he guided Gary Laidman of South Wales and Bob McNamara of Allegany to hefty catches of steelhead using a mix of Kwikfish and pink egg sacs fished off 3-way rigs. A few brown trout and lake trout are hanging around, as well as some walleye. Downriver, the brown trout and lake trout were cooperating a bit more and MagLips were added to the list of available lures. Minnows were used to hit trout and walleye. A fair number of bonus king salmon were being caught as anglers drifted off the mouth of the river near the green buoy marker. Shore anglers didn’t fair as well. Mike Rzucidlo of Niagara Falls reported a 3-for-3 day on steelhead in the gorge by tossing a favorite No. 4 spinner. Fishing from shore is tough without boots. Be careful walking the gorge along the shoreline. Ice grippers are important. The NRAA steelhead contest is Feb. 22. 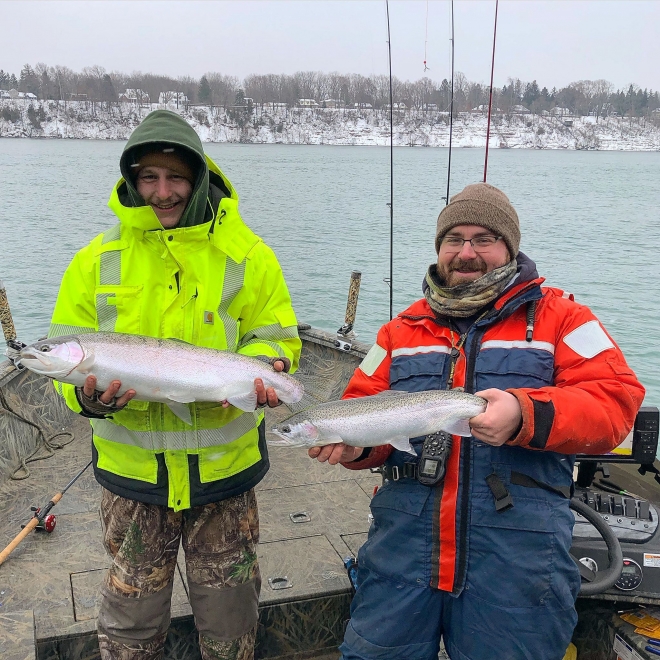 Flows in the Oak Orchard River are nice but a little on the clear side, according to Ron Bierstine with Oak Orchard Tackle. Flows are medium or a bit better with 2-3 feet of visibility. Anglers at the Waterport dam are reporting a mixed bag of browns or steelhead. Downstream, slow, flat water has given up a few Atlantics for fly anglers. Other smaller streams report a mix of ice or slush in drifts. A serious cold snap is forecast for the end of the week, which should bring down levels but add ice in some spots. Burt Dam and Eighteen Mile Creek were tough fishing on Tuesday.

Gary Metz Jr. reports fishing has been good through the ice. Big fat northern pike are a hot catch, but panfish action has been a bit slow. However, they are slowly starting to turn on, just in time for the sixth annual Conesus Lake Frostbite Ice Fishing Derby on Feb. 15-16. Bass are big and are being caught regularly. Ice is 5- to 6-inches thick on the North End and it should get better with the cold snap coming. As far as the ice derby this weekend, it always promises to be a lot of fun. Weigh-ins will take place at the Conesus Lake Sportsmen’s Club in Lakeville. Proceeds will benefit Honor Flight Rochester and the Meyers Memorial Fund. For complete information, contact Metz at 585-414-5586.

Whitefish action has been heating up on the hard waters of Lake Simcoe, where ice thickness varies from 6 inches to well over a foot, according to Wil Wegman, our roving Canadian ice wizard. (Check with local hut operators or bait shops for the latest details.) Many successful anglers have reported their best catches between 25-40 feet of water, much shallower than was customary five years ago. Bottom bouncing baits like the Bad Boyz, Meegs and Blue Fox Foxee Jigging Minnow tipped with a small crappie tube or plastic grub have been key as long as the angler knows to minimize action on these baits with very slight lift/pause movements that keep one end of the bait in contact with the bottom. When he fishes open ice with these, Wegman prefers a medium light action HT Big Eye Pro Touch that’s 42 inches long. The super-sized, no-ice-up guides were especially welcomed Saturday when he fished open ice in -4-degree weather. When fishing in one of his smaller HT portables, he goes with a shorter 27-inch outfit with slightly smaller guides like the Polar Fire Select SX Ice rods in Medium Action. For all his New York friends who come to Simcoe for the perch, give yourself an added thrill and try to catch a couple (limit is two) of the lake’s 4- to 5-pound (several over 7 this year) whitefish. Lake trout has held its own the past week and several of the 10- to 13-pounders caught were taken from some of the same shallow waters as the whitefish. Limit is two with a full sport license. Whatever species you bring home, be sure to leave the skin on for ID and don’t pack or freeze them so they can’t be counted by conservation officers or by guards when you cross the border.