Parminder Devsi was astonished last October when not one, but two Uber drivers recognized him after his Seattle startup won $500,000 in the state's 43North business plan competition.

"You have thousands of people show up," Devsi said recently about the event at Shea's Performing Arts Center. "It's like a rock star concert for geeks."

Devsi and six other prize winners from the competition are now getting the celebrity treatment from 43North, as they move into the organization's new home on the 24th floor of Seneca One tower. As the founders work on developing their businesses, 43North hopes they will have such a good experience in Buffalo that they will choose to stay beyond their one-year obligation, creating jobs and investing in their operations.

Their arrival is part of the rebirth of Seneca One tower, which owner Douglas Jemal is redeveloping. M&T Bank is renovating 11 floors inside the tower, plus two at the plaza level, for its new "tech hub," and expects to have 1,000 employees working there by midyear. The bank is eager to see more tenants like 43North – which relocated from the Buffalo Niagara Medical Campus – fill up floors at Seneca One and create a downtown tech community.

Devsi's company, Robodub, is developing drones capable of carrying multiple payloads, in harsh conditions. Devsi sees potential with government resupply missions, hospitals and the construction industry. "It's still early," he said. "This is at an advanced prototype level."

But Devsi is bursting with ideas for making connections with places like the University at Buffalo and Moog Inc. And he is eager to learn from other startups. Devsi relished the opportunity to talk to officials from ACV Auctions, a past 43North champion that has surpassed $1 billion in valuation, becoming Buffalo's first "unicorn."

"They were so humble and grounded, and they were able to tell us, 'Hey, I made a mistake like this, don't do this,'" Devsi said. "Typically that's my favorite question when I meet successful founders. I ask them, what are the top three mistakes they did? If I talk to 10 founders, I know at least 30 ways not to make the same mistake."

The 43North business plan competition, funded by state money, aims to boost the region's startup community. The newest class of companies consists of one $1 million grand prize winner, plus six runners-up who won $500,000 each. (A seventh $500,000 winner was unable to relocate here and forfeited her prize money.) 43North gets a 5% equity stake in their operations.

The seven prize winners – six of whom are from out of town – have formed connections with each other and have made contacts in the local business and academic worlds, thanks to introductions by 43North. 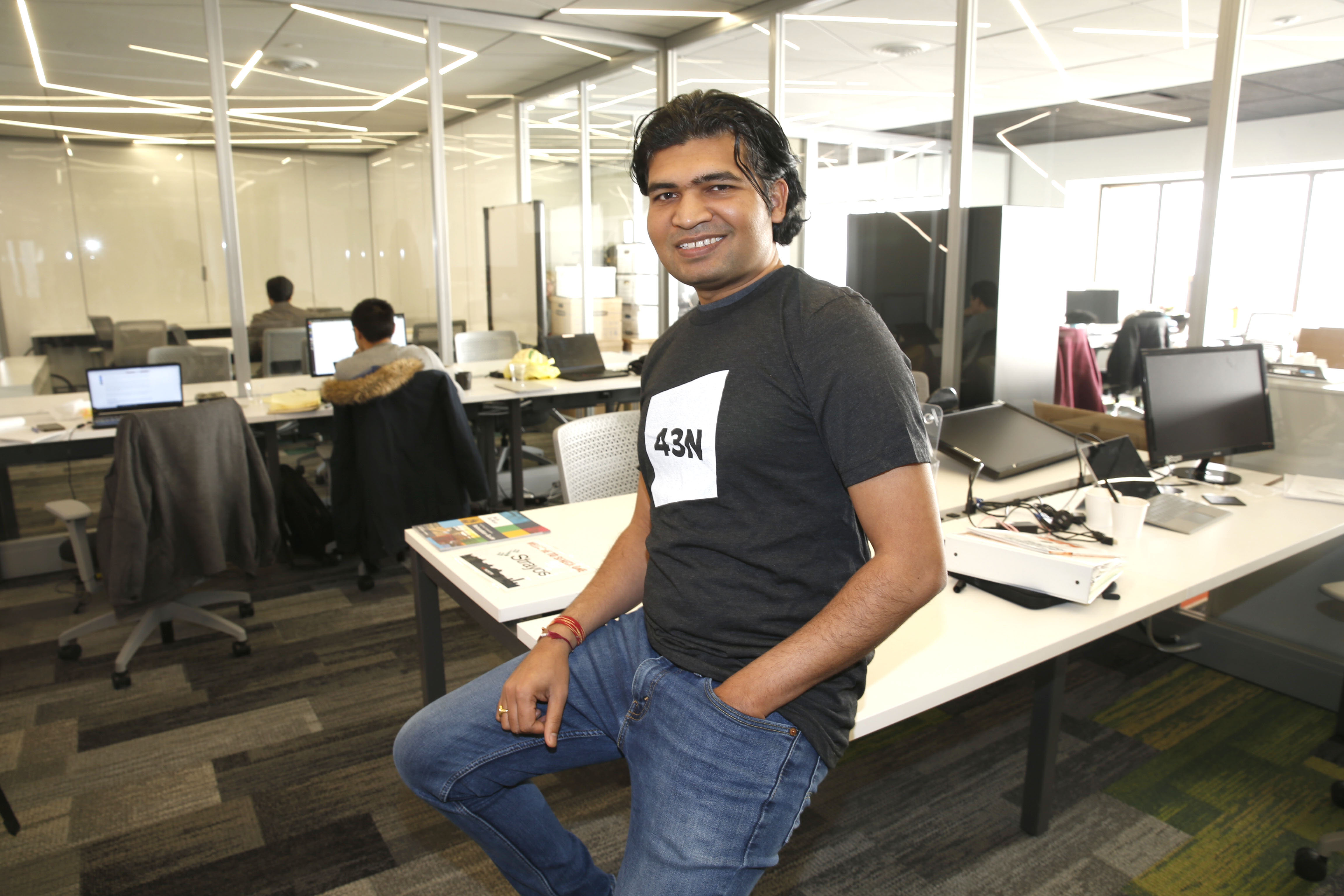 Ravi Sahu, founder and CEO of Strayos, and winner of the $1 million grand prize last October. His company's technology is akin to an under-the-ground version of Google Maps, serving the mining and construction industries with the help of drones and computer analysis. (Robert Kirkham/Buffalo News)

Ravi Sahu, the founder of Strayos, won the $1 million grand prize. He has relocated his family, his Great Dane and his company from St. Louis, Mo. The company's technology is akin to an under-the-ground version of Google Maps, serving the mining and construction industries with the help of drones and computer analysis.

Winning the competition remains a thrilling memory for Sahu. It took him about a week to comprehend that he had really claimed the grand prize. The day after his victory, he shipped a copy of a newspaper with a story about his victory to his parents in India. Sharing the moment with his family was meaningful to him.

"Startups are hard always, and parents, they always want you to do well," Sahu said. "This type of experience when it really happens, it gives the entire family confidence that what we are building, the mission we have, that we can really go forward with it."

David Aronson, the founder and CEO of Peanut Butter, came here from Chicago. His business helps client companies offer student loan assistance as a benefit. The idea is to give his clients a way to attract and keep workers in a tight job market.

Since the competition, Aronson has been adding staff, cultivating clients and tending to the administrative duties of moving. Aronson said winning $500,000 that night was another "vote of confidence" in his company, and created additional recognition for Peanut Butter, including with local businesses. And now he finds himself surrounded by other startups. 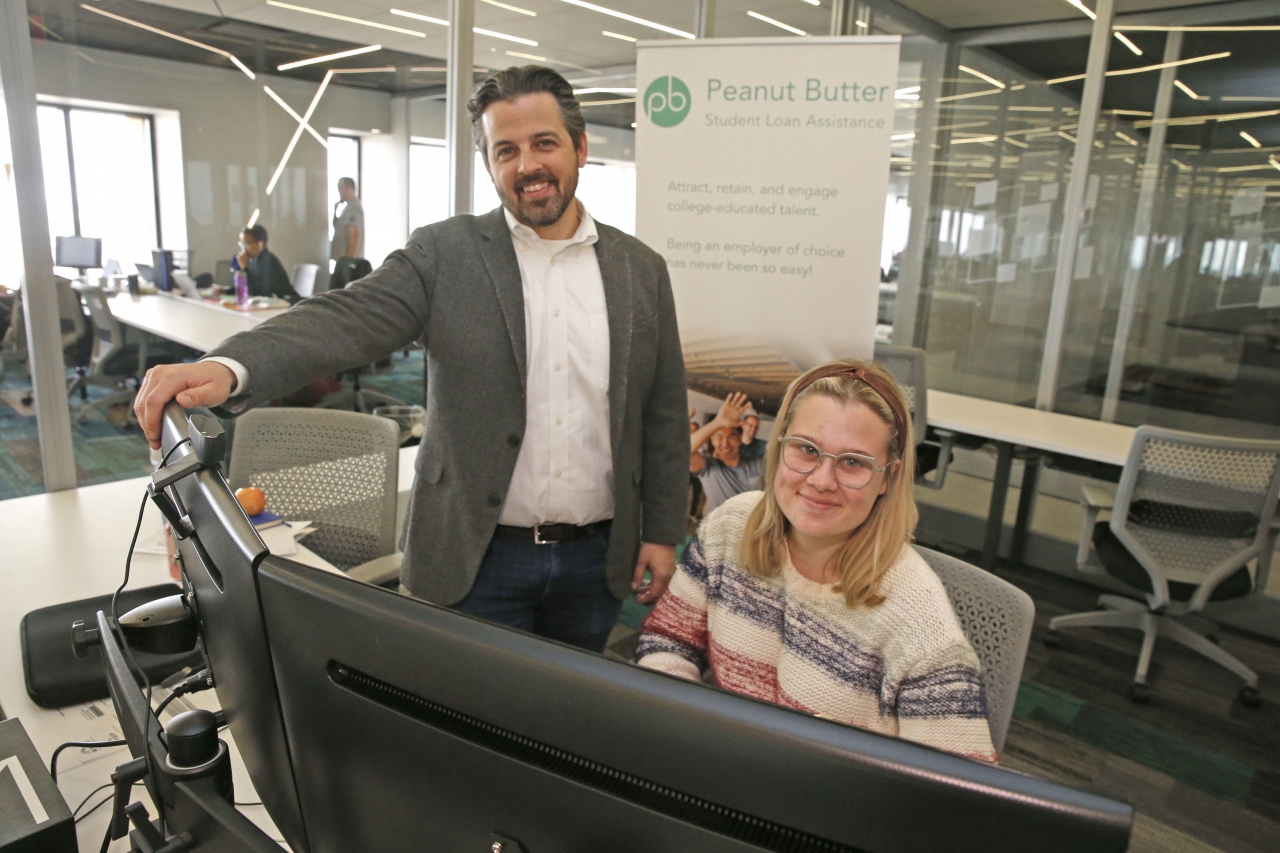 "I feel like I already have six other friends in the founders, people who I can trust, people who have already offered to help, whether that's with introductions to new clients or prospective team members, advice on this, that or the other thing," Aronson said. "It's great to have an extended advisory team, essentially."

While the new prize winners have just arrived, 43North's staff has kept them busy. The founders' first week here was a whirlwind, consisting of a dinner, meetings with mentors, and a visit from UB and Invest Buffalo Niagara officials, capped off by a group tour of the city's "hidden gems," said Colleen E. Heidinger, 43North's president.

"We warn them it's going to be a lot, both socially and programming wise," Heidinger said. "But it's just good for them to know right off the bat who's here to help them, in what capacity."