They may not be packing the seats at KeyBank Center, but Buffalo Sabres fans are still sitting in front of their TV sets watching the struggling team at a decent rate.

Over the first 50 games this season, the Sabres have averaged a 7.05 rating on MSG.

And despite all the outsized attention that disgruntled fans writing songs and staging protests have received over the last few weeks, the ratings haven’t tanked, either.

The 12 games televised since Jan. 1 have averaged a 5.7 rating, with the average brought down by four afternoon games that generally get lower ratings.

To put those ratings in perspective, most prime-time network programs don’t get live ratings as high as Sabres games in Western New York.

Of course, there has been a big drop from the early season surge when the team got off to such a hot start. The team’s hot October led to an average of a 7.6 rating on MSG over the first nine games. 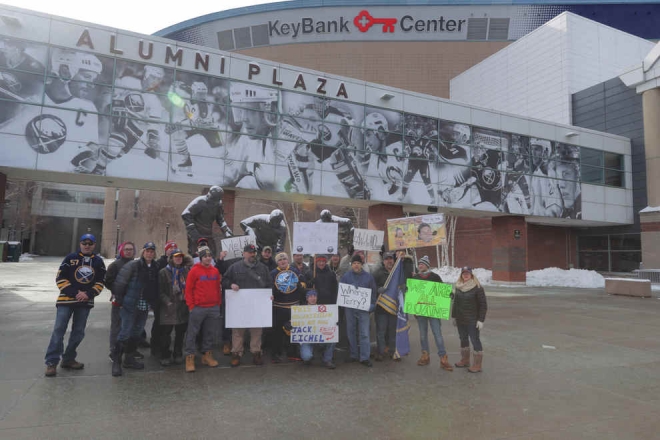 While organizer Peter Tripi predicted hundreds of disgruntled fans at Saturday's protest of the Sabres' losing record, just over two dozen showed up at Alumni Plaza outside of KeyBank Center. (John Hickey/Buffalo News)

But a rating decline was inevitable as the team struggled and is likely to continue as fans have lost any hope the Sabres will make the playoffs for the first time with superstar Jack Eichel.

Even with the declining ratings, the Buffalo market appears to be the No. 1 TV market in the country for their home team’s games. Buffalo usually battles Pittsburgh for that honor. According to statistics from Home Team Sports, an arm of Fox Sports Media Group, Pittsburgh is averaging a 5.54 rating this season.

It is unlikely the Sabres will approach the final season average of an 8.1 rating in the 2018-19 season.

Despite fan anger and frustration, the team should end the season with a rating much higher than the 4.8 it averaged in the 2017-18 season.

The fan disappointment is understandable. When a friend called me last week with an offer for a ticket to the game against Detroit, I asked him how much he would pay me to go. (I went to the game in which the Sabres lost in a shootout to the worst team in the league.)

Still, the TV coverage of fan frustration and disappointment has been a little over-the-top.

A local singer who wrote a novelty song “Hey Jason Botterill” – to the tune of "Hey There Delilah," the 2006 hit from the Plain White T's – that asked the Sabres general manager to make a trade received considerable TV attention. That included an in-studio interview on WGRZ-TV.

As another season slips away, Sabres fans unleash their anger

It would have been nice if anyone interviewing her would have asked just exactly which Sabre with an affordable contract is playing well enough to be sought by another team.

The coverage of a Sabres fan protest over the weekend the day after the team defeated the host New York Rangers was even more laughable, with people reportedly chanting, “Terry Must Go.”

You can make the argument that owners Terry and Kim Pegula saved the Sabres in the smallest American TV market in the NHL and the Buffalo Bills in one of the smallest TV markets in the NFL.

If he “goes,” heaven help both teams.

Some Buffalo sports fans don’t realize how fortunate they are to have two professional sports teams in a market this small. In the days before the media was affected and distracted by social networks, a protest attracting a couple of dozen people as the one last weekend did would either be ignored or get a brief mention.

There were almost as many reporters and photojournalists there as protesters.

The guy orchestrating the protest was all over TV, telling people fans wanted to hear from Pegula.

It is a reasonable request, even if it is hard to know what the owner can say to stop the songs and protests.