Almost every level of government – federal, state, county and city – plunged headlong Monday into the escalating dispute between Washington and Albany over the Trump administration's new prohibition against New Yorkers renewing or enrolling in its trusted traveler program.

Minutes after U.S. Attorney James P. Kennedy Jr. asserted at a Peace Bridge news conference that customs and immigration officers at the border, as well as the public, are threatened by New York blocking the officers' access to state Department of Motor Vehicles records, Gov. Andrew M. Cuomo filed suit against the Trump administration.

Cuomo defended the state’s Green Light Law that allows undocumented immigrants to obtain driver’s licenses and announced litigation against the U.S. Department of Homeland Security, Customs and Border Protection, and the two agencies’ acting leaders. He argued the Trump administration's change to the trusted traveler program is arbitrary, poses a threat to the state’s safety and economy, harms hundreds of thousands of residents and interferes with New York’s rights as a sovereign state.

“We will not compromise our values nor back down when the federal government continues to unfairly and illegally target New York,” Cuomo said Monday. “There are more than a dozen states – including red states – with similar laws, but President Trump and his enablers are once again taking their aim at New York’s economy in a way that not only inconveniences travelers, but also creates very real security issues.”

He also said he spoke to Trump over the weekend to request a face-to-face meeting on the subject.

But he now feels compelled to note that because the Green Light Law blocks Homeland Security officers from viewing state driving records, it puts the national security, border officers and the public at significant risk.

“This is not about politics,” he said. “It’s about public safety. It’s about national security.”

“Where the actions of state lawmakers impede the ability to do our job, that’s where I get involved,” he added. “I have an obligation to speak out.” 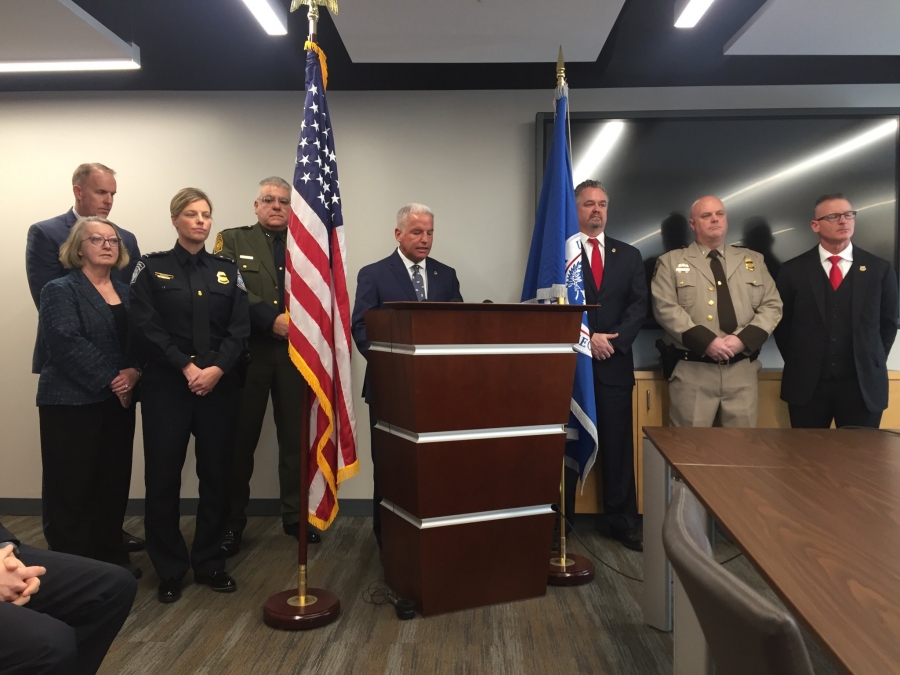 Others across New York State were also weighing in on the controversy:

• Three other U.S. attorneys in New York, who like Kennedy work for the Trump administration, joined him in demanding changes in the Green Light Law and outlining the host of problems it causes.

“Customs and Border Protection officers working today at New York’s 13 ports of entry ... are unable even to check the registration or the driver’s license status of individuals presenting themselves for admission into our country,” they said. “Border Patrol agents, who secure the border between the ports of entry, likewise can no longer check vehicle or driver’s license information. Forcing officers who serve as our nation’s frontline defense against dangerous criminals entering the country to make these important determinations in the dark dramatically diminishes the safety of all.”

• Erie County Executive Mark C. Poloncarz, a Democrat, assailed the federal government’s new regulations, targeting Rep. Tom Reed of Corning, who is emerging more and more in recent weeks as a GOP spokesman in New York and a potential gubernatorial challenger to Cuomo in 2022.

“Currying favor with an increasingly unsteady, hostile and out-of-touch White House at the expense of New Yorkers is wrong and harms the public,” Poloncarz said. “The congressman needs to reverse his course, advocate for the people of New York, and tell DHS to stop the ban now.”

• During a Cheektowaga appearance, Sen. Charles E. Schumer labeled the Trump administration’s actions punitive, noting that New Yorkers who were vetted to apply for or renew NEXUS cards that allow them to expedite international crossings, are also affected.

“I’ve worked very hard to allow NEXUS to be used when cars and trucks cross over the border,” he said. “First I support the lawsuit that the state is doing, but second I am looking for every federal way to undo it. This is punitive, it is aimed at New York, and it should go fast, because it hurts our economy, and it will hurt hundreds of thousands of people across upstate New York.”

• In Albany, Buffalo Mayor Byron W. Brown devoted part of his testimony before Legislature committees assembling the new state budget to raise his own alarms.

“This policy will have lasting and catastrophic fiscal implications for our residents and businesses, and if this decision is not reversed we will certainly see an immediate impact on the city’s economy,” he said.

• Niagara County Clerk Joseph Jastrzemski urged people to get passports instead of relying on their New York State driver’s license to meet a federal requirement that travelers 18 years and older on domestic flights have REAL ID-compliant documents beginning Oct. 1. He warned of the federal government’s potential problems with New York licenses because of the Green Light Law.

“As we have now seen, the federal government does not trust documentation coming out of New York State because of Gov. Cuomo’s failed Green Light legislation that gave illegal immigrants driver’s licenses,” said the Republican county clerk, a critic of the new driver’s license law.

• Democratic Assemblywoman Monica P. Wallace of Lancaster, who voted against the Green Light Law, said any law that prohibits law enforcement agencies from cooperating with one another is flawed at the outset, and urged state and federal authorities to work together to find a solution.

“All options must be discussed, including repealing the Green Light Law or amending it to restore law enforcement access to DMV records,” she said.

But most of Monday’s developments boiled down to the arguments presented by Kennedy and his team versus the lawsuit backed by Cuomo and filed by State Attorney General Letitia James.

Kennedy said he was stepping into the political firestorm because the Green Light Law “specifically and purposely blocks the DHS mission,” outlining all the information in DMV records that law enforcement at the border cannot obtain. It ranges from obtaining vehicle registration information, to establishing probable cause for search warrants, to determining whether to admit drivers entering the country.

“This poses a grave risk to the safety of our officers ... and the public,” Kennedy said.

The state’s counterpunch included the suit filed by James, who as attorney general will now pursue Albany’s case in court.

“The Trump administration’s new policy not only negatively impacts travelers, workers, commerce, and our economy, but it jeopardizes public safety,” she said. “No one should ever use our nation’s security as a political weapon, let alone the commander in chief.”