In multiple ways, the timing last week for a conversation with Pete Chaston was, well, absolutely golden. Friday's snow day for Buffalo schoolchildren was a flashback to what impressed Chaston about this region almost 40 years ago, until the former Rochester meteorologist and big snow enthusiast left to forecast weather in Kansas City.

His football loyalties gradually shifted from the Bills toward his adopted Chiefs. Chaston spoke with joy of that city's Super Bowl championship before he focused on the purpose of my call, which involved some wintry turbulence around an upstate legend he helped create.

Chaston, in the late 1970s, was godfather of the Golden Snowball, a symbol of large city snowfall supremacy earned last winter by Buffalo, with 118.8 inches of snow. Yet the trophy has yet to arrive at City Hall, where Mayor Byron Brown is not sure it is something to embrace.

"That's no competition to me, and that's nothing really to be celebrated," Brown said to Stephen T. Watson of The Buffalo News.

Told of that reluctance, Chaston and others who helped create the award want the mayor to know why they did it in the first place.

It is a compliment, not a booby prize.

"I can't believe they aren't making a bigger deal of it," said David Sage, now-retired lead meteorologist at the National Weather Service in  Buffalo who was part of how it happened.

Even so, there is an amiable solution involving you, an utterly unofficial and spontaneous way – because nothing about this tale has anything remotely approaching rules – for readers to nominate a suitable recipient of that trophy in the City of Good Neighbors.

Send along word if you know someone who is especially selfless and devoted in the snow.

The last few days are a reminder of how Buffalo, only a year ago, was getting hammered by snow. By last April, when it finally stopped snowing, the National Weather Service had measured almost 10 feet for the season at Buffalo Niagara International Airport. 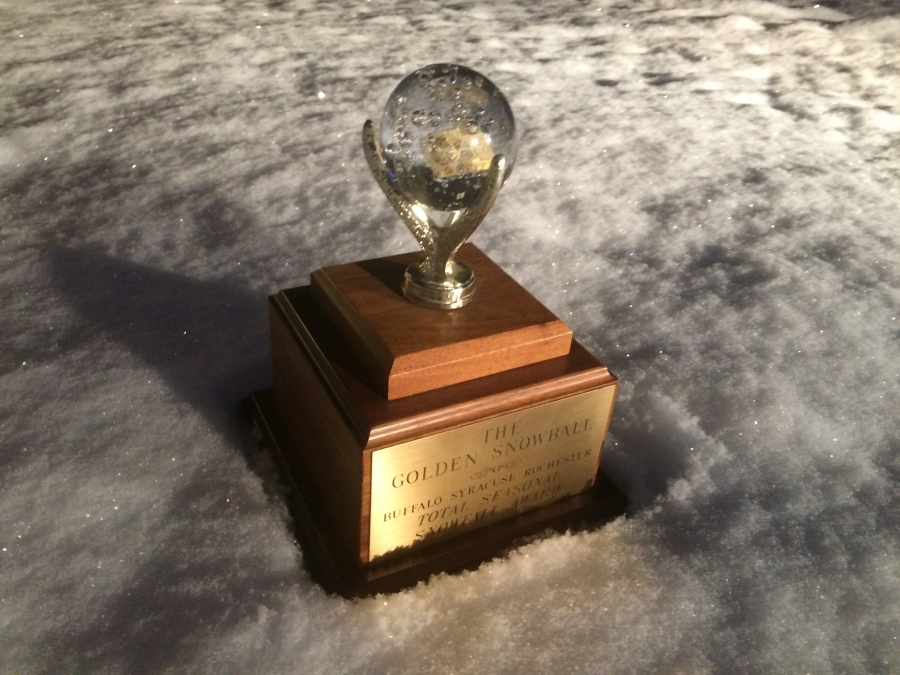 The Golden Snowball: In one place or another, it belongs in Buffalo. (Sean Kirst/Buffalo News)

The city ended up as the snowiest metropolitan area with a population of 100,000 or more in New York, a position far more typically occupied by Syracuse. Pat DeCoursey, oracle of the Golden Snowball and the guy who keeps track of such things, also determined that Buffalo was the snowiest big city in the nation.

In the end, Buffalo could claim the statewide trophy for the first time since 2002. The problem is, based on longtime whimsical fascination with the award – Sage first told me about it almost 20 years ago – I can testify the whole stop-and-start-again chronology involves absolutely zero rules or structure. To paraphrase the Joker, the Golden Snowball – famous enough to be mentioned on "Saturday Night Live" and the Weather Channel – was never meant to be so serious.

The original award, created by Chaston and Sage and some of their colleagues, was a foam ball spray-painted gold and stuck atop an old Little League trophy, then delivered annually by a caravan of meteorologists to the mayor of the state's snowiest big city.

The 'Golden Snowball' is rightfully Buffalo's. So why does Syracuse have it?

That lasted all of a few years, before the makeshift Golden Snowball mysteriously vanished. Two decades later, after I wrote a piece about it, Roseanne Anthony and her A1 Trophy Shop of Syracuse donated a genuine trophy topped by a gold-flecked snowball that is on permanent loan to Syracuse City Hall.

While Anthony wants that trophy to remain where it is, she is offering to make a new version for Buffalo. Yet the mayor's office here, not so sure about the value of that snow king reputation, quietly turned it down more than once in recent months. In full disclosure, the first offer on behalf of Syracuse Mayor Ben Walsh was made by my son Liam, a city planner.

Brown elaborated a few weeks ago on his reluctance, after members of the Western New York chapter of the American Meteorological Society wondered in a Buffalo News letter to the editor why the Golden Snowball had yet to arrive in tribute to last year's memorable winter.

The mayor told Watson that he was unaware of the tradition, and he saw little benefit in celebrating that status as snowiest big city.

"Simply to be trading a trophy back and forth that we have nothing to do with – Mother Nature decides who gets the most snowfall – my response was I wasn't really interested in that," Brown said.

Still, here is where all the circles comes together: The mayor said he would much rather see an upstate competition for acts of compassion in big snow.

In that way, accidentally or not, he embraced a central element of the original purpose. 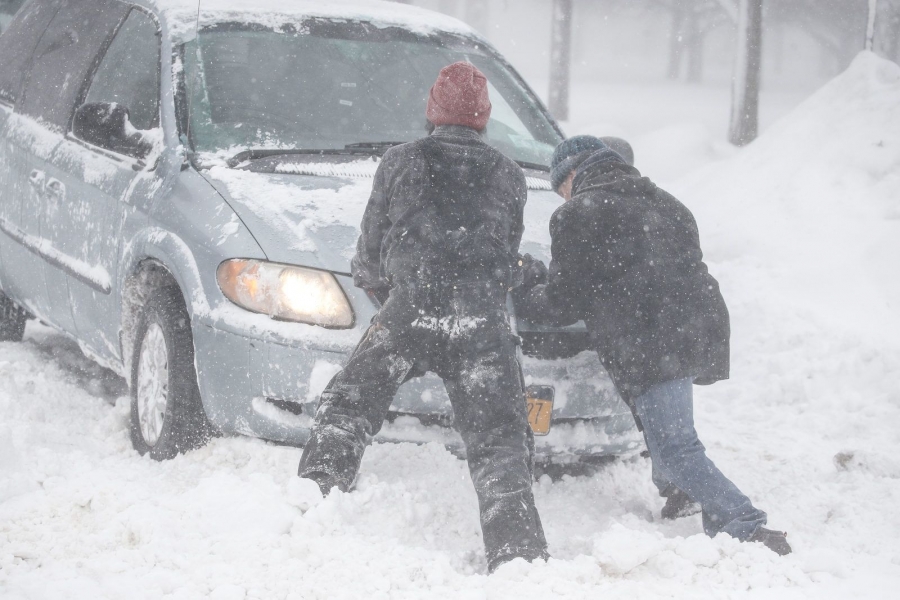 As Chaston and Sage recall, the entire goal was providing a gentle way to change perceptions. In 1977 and ’78, Buffalo endured consecutive winters involving more than 350 inches of snowfall. Internationally, the city was associated with wire service photos of buried cars, savage winds and overwhelmed pedestrians.

The Golden Snowball was meant to be a counterweight, a symbol of joyous resilience. It was emblematic of plow drivers who handle the snowiest big city streets in the nation, of residents who look out for their most vulnerable neighbors, of communities that collectively deal with snowstorms that might buckle other places. 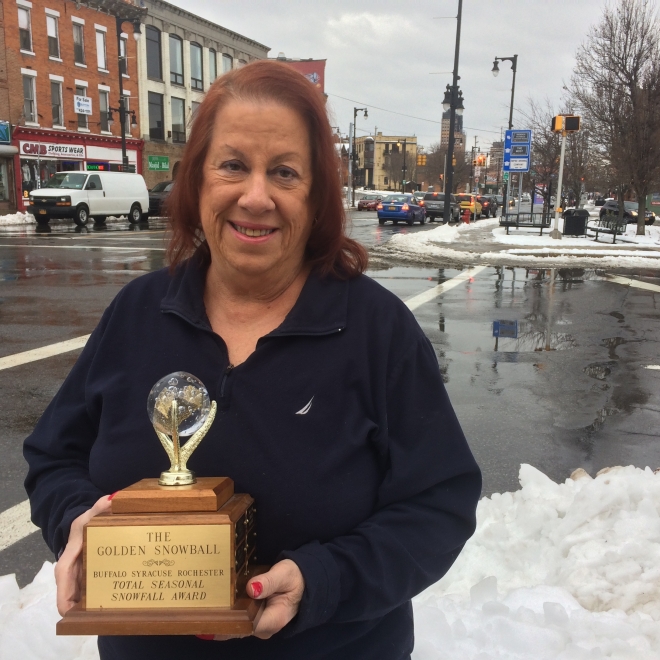 Roseanne Anthony: The creator of the "new" Golden Snowball is making a new one, for Buffalo. (Sean Kirst/Buffalo News)

"The whole idea was that snow had many facets, and to see the positive in it," said Chaston, whose mission was bringing together the Thruway cities in communal hardiness, not driving them apart. Most important, the inspiration was Buffalo's record-shattering snow – 199.4 inches in 1976-77 alone – which makes it seem as if we ought to embrace with humor this rare chance for the Golden Snowball to come home.

I suspect there are plenty of everyday people on the Niagara Frontier who would be honored to have the trophy, exactly the kind of folks to whom the mayor referred. So to make that happen in a completely unstructured way – keeping with the spirit of the thing – here is a request:

If you live in greater Buffalo, you undoubtedly know someone who copes with winter in selfless fashion, the kind of person you always wish you had a way to thank.

Golden Snowball is symbol of upstate winters. So where is it?

Here you go. Send us those names. It could be a neighbor who routinely clears sidewalks for others on the street, or a volunteer teaching children to skate who might otherwise not have a chance, or a supermarket worker who goes out of the way to helps shoppers in storm-swept parking lots. It could be a stalwart crossing guard or plow driver or anyone else who always helps those who need it most, amid the snow.

From those submissions, we will find a way to come up with one especially uplifting choice as a trophy recipient while using our website to share the names of all the nominees. Anthony will craft her new trophy to honor the approach. And in keeping with the spirit and history of the whole thing, we will figure out the rest by the seat of our pants, as it goes along.

The deadline for entries is Feb. 22, and you can email your suggestions to skirst@buffnews.com or write to me in care of The Buffalo News, One News Plaza, Buffalo, NY 14240.

The reality is that Buffalo will always be among the nation’s snowiest large cities – as of this writing, even in this relatively mild winter, Rochester is first, Syracuse second and we are fifth – leaving Chaston and Sage to realize one truth from the start.

The golden part is as much about the people as the snow.

Sean Kirst is a columnist with The Buffalo News. You can read more of his work in this archive.