U.S. Attorney James P. Kennedy Jr. blasted New York State on Monday for refusing to share Department of Motor Vehicles records with federal immigration and customs officers, saying it puts at risk the nation's security and the lives of federal agents at the border.

Kennedy and other federal law enforcement officials criticized the state for withholding DMV records on driver's licenses and vehicle registrations, just days after the Trump administration announced it would no longer allow New Yorkers to enroll in trusted traveler programs like NEXUS and Global Entry because of the state's Green Light Law.

It “jeopardizes the safety of all inhabitants of our great country,” Kennedy said at a news conference near the Peace Bridge in Buffalo. 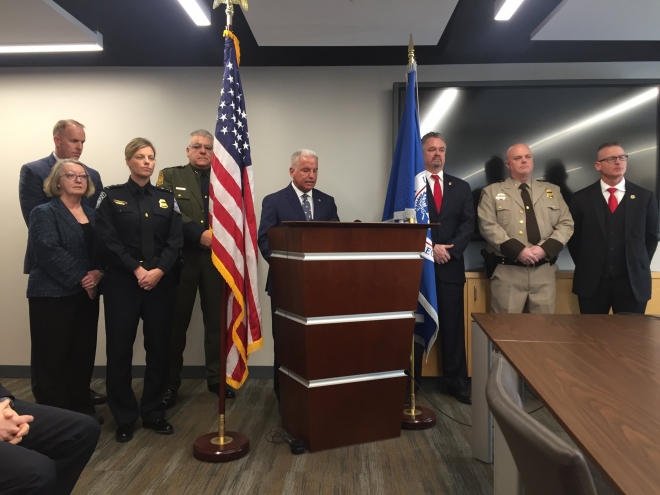 U.S. Attorney James P. Kennedy Jr. criticized New York's Green Light Law, saying it is putting federal law enforcement officers and the public at risk because New York State will no longer share DMV records with Customs and Border Patrol. He was joined by customs and immigration officials at a news conference at the Peace Bridge on Monday, Feb. 10, 2020.

Kennedy said he normally doesn't comment on the actions of New York State government, but now feels compelled to because the law's inherent dangers to law enforcement and even the public.

"This is not about politics," he said. "It's about public safety. It's about national security."

"Where the actions of state lawmakers impede the ability to do our job, that's where I get involved. I have an obligation to speak out."

An array of customs and immigration officials joined Kennedy at the news conference, and they outlined the impediments that their agents now face because they are denied access to DMV records.

Even normal license plate scans at the border that determine whether a New York driver is wanted on a warrant or driving a stolen vehicle are now off limits because of the Green Light Law, they complained.