The dinner table in the Ianello house is an instruction zone for basketball. After Clarence High School's games, Denise Dove Ianello and her oldest son, Zach, go over what Zach did right and what he did wrong in each game, and where he can improve.

Zach’s father, Rob, exits to the living room with their two younger children, Ashley and Courtney. But he can hear each exchange between Denise and Zach, a junior forward/guard with the Red Devils.

Sometimes, Zach doesn’t necessarily agree with what his mother tells him, yet he won’t argue. Denise is the basketball expert in the Ianello family. She’s in her second season as assistant coach on the Clarence boys basketball team, but according to Rob, her husband of 22 years, she’s also the best coach in the family.

Clarence’s players know Denise Dove Ianello as Zach’s mom, but they also know Ianello – known to many as “DDI” – as a coach who brings a robust basketball resume to her role with the Red Devils.

She was a three-year starter at point guard at Northern Illinois and a two-time all-state selection at Robbinsdale Armstrong High School in Plymouth, Minn., where she was an honorable mention USA Today All-American and Parade Magazine All-American.

The Ianello family moved to Western New York in June 2015. Rob Ianello joined Lance Leipold's football coaching staff at the University at Buffalo as associate head coach, wide receivers coach and recruiting coordinator in January, but the children finished school in Kansas, where Rob had coached before he was hired at UB.

Clarence coach Doug Ratka approached Ianello in the fall of 2018 about coaching at Clarence, yet she took time to contemplate the decision. She didn’t anticipate that he’d ask her to join the coaching staff in a volunteer capacity, just to talk basketball strategy like they usually did.

“I didn’t want to step on toes, in a tighter community,” Ianello said. “We took our time with the decision and eventually, after a couple practices, we got acclimated. And Doug and I are on the same wavelength. We have the same way of thinking, whether it’s offenses or defenses, game situations, practice.”

Having Mom coach one of his teams is nothing new to Zach Ianello. His mother began coaching his teams when he was in kindergarten. He traveled with the women’s basketball team at Wisconsin, on bus trips and plane trips. But in his own basketball games and practices, Zach had to separate “coach” from “mom.” He wondered how it would work out at Clarence, but was surprised by the easy transition. He even calls her “coach.” 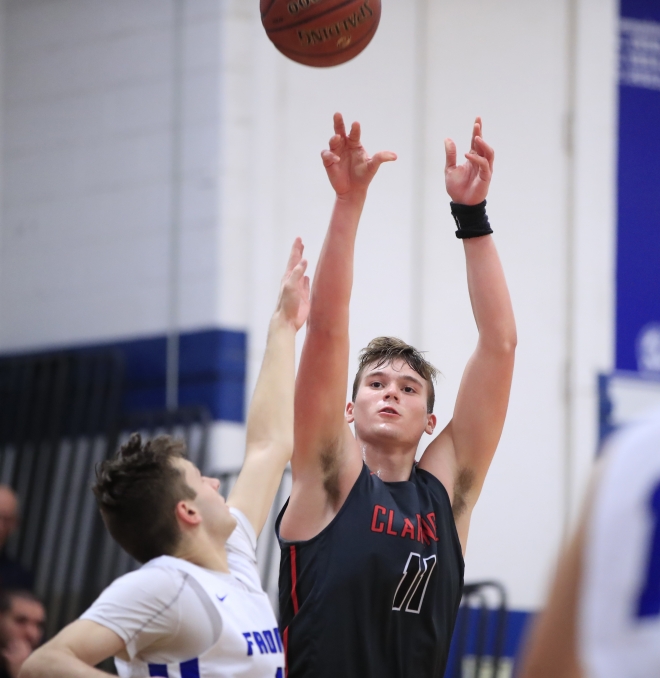 “We knew, step on the lines of the court, and it changes," Zach said. “I never call her ‘mom’ but when we go home and stop to get something to eat, she’s my mom. We balance that out really well.”

Basketball is going through a movement of sorts. There are 12 assistant coaches in the NBA who are women, including Becky Hammon with the San Antonio Spurs, Kara Lawson with the Boston Celtics and Lindsay Gottlieb with the Cleveland Cavaliers.

But in the lower levels of the sport, it is unique. In Western New York, it’s a rarity. Ratka believes Ianello and Grace Licata at Starpoint are the lone women on high school boys basketball coaching staffs.

“It’s really unique,” Zach said. “I’ve seen it on maybe one AAU team, but besides that, you don’t really see it that much, anywhere. But she carries the confidence, she has the highest confidence you can have. She doesn’t really think about it, and she doesn’t think about that she’s the only woman coaching in the gym. She thinks she’s the best coach in the gym. She sees through all of that.”

There were a few initial questions about Ianello’s arrival in the program. But once she started coaching, her methods were a display of her basketball credentials.

“As she starts to work with kids, our players understand that her knowledge is really vast, and she’s someone you listen to, because she understands the game,” Ratka said. “She will help your game. She will help our team.”

Several coaches from other schools saw the petite, fiery blond woman on the Clarence bench and did some research on the new assistant.

“They’d say to me, ‘I looked up her background. It’s pretty impressive,’ ” Ratka said.

Denise and her husband, Rob, met when they were coaches at the University of Arizona in 1994. Rob was a football recruiting coordinator at Arizona.

Denise was an assistant with the Wildcats’ women’s basketball team, but when they first met, Rob had no idea that his future wife had some serious game. 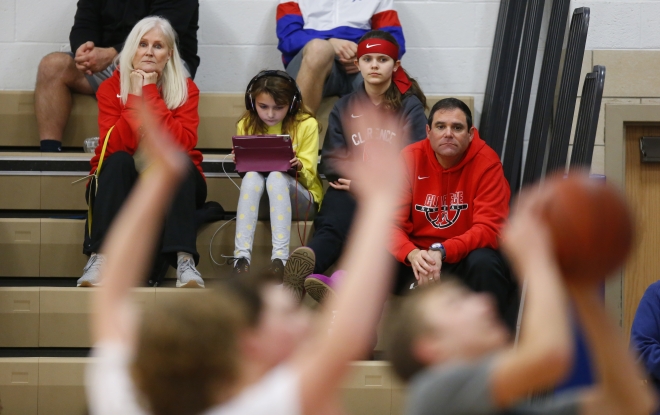 Denise regularly played noon basketball at the the McKale Center on the Arizona campus in Tucson. One afternoon, former Arizona football coach Dick Tomey insisted that Denise play a game of one-on-one. She initially declined, but Rob remembers how Tomey tossed a basketball at her, challenging her to square off against him.

The Ianellos married in 1998 and Denise coached at the college level until 2005, when Rob joined the football coaching staff at Notre Dame and they decided to have more children. Basketball remained in the picture, though.

When Rob was a recruiting coordinator and wide receivers coach at Notre Dame, Denise broke down film and wrote scouting reports on opponents for Irish women’s basketball coach Muffet McGraw, and attended as many basketball practices and games in South Bend as she could.

She has coached her children’s basketball teams in Ohio and Kansas, and when they moved to Buffalo at the start of 2015. Rob was the head football coach at Akron in 2010 and '11 and the wide receivers coach and recruiting coordinator at Kansas in 2012 and '13.

“She didn’t give up her passion for the game, and I love that about her,” Rob said. “For her to be involved in basketball with our children, and for the kids to get the experience she has? Fifteen years of coaching, her playing experience, sometimes they don’t know how good they have it.” 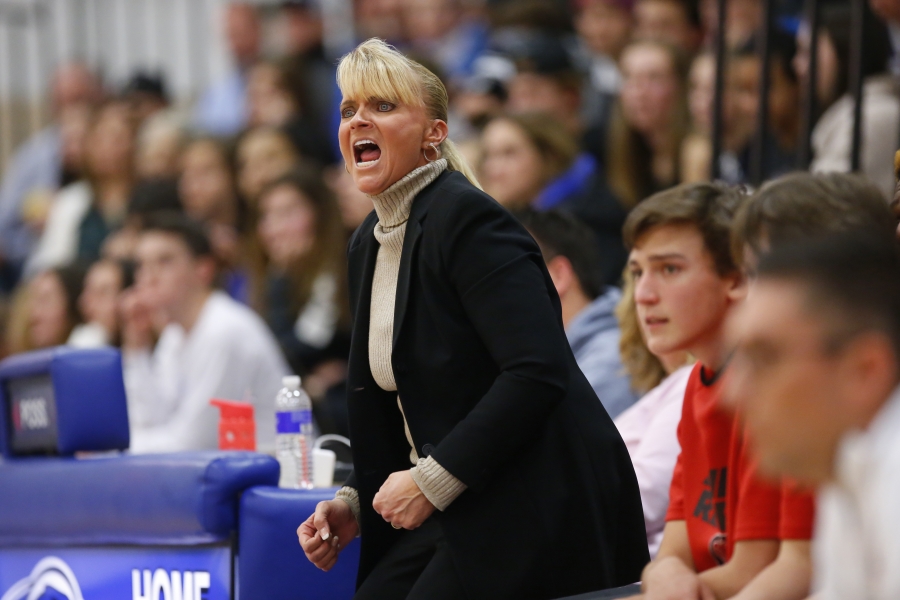 At Clarence, Ratka typically hands over the first 15 minutes of practice to Ianello, who leads the team through dribbling and shooting drills. In the pre-practice basketball huddle, she addresses the players in tactical basketball terms, explaining sets and breaking down plays.

She also demands the same level of intensity that she projects. At one point, during a recent pass-and-shoot drill, she asks a player, “Why are we walking?”

Just before the start of a practice in mid-January, as Ianello led the team through the start of practice, Ratka held a sheet of paper with itemized notes written in black ink. It was a list of Ianello’s observations from the previous night’s game.

“The day of a game, she also sends out a huge scouting report and it’s really detailed, and very thorough,” Ratka said. “A friend of mine who we coach against, at the end of the year, was playing an opponent and he was curious about our scouting report on them. I asked DDI if I could send it to him.

“I sent it to him and he responded, 'My scouting report is so inadequate!’ ”

Rob said Denise will spend five hours a day in their home in Clarence, breaking down game film on Hudl, a popular video-sharing website for high school sports. She prepares a meticulous report for Ratka and for the players on what went right, what went wrong and what the Red Devils need to correct as they prepare for the next game.

Clarence’s players, too, notice how Denise pays attention to the small details and brings a different perspective.

“She brings so much energy to the court and she has a lot of tenacity when she coaches,” said J.D. Brooks, a junior center for the Red Devils. “To find out what she’s accomplished, it’s amazing. At first, it’s weird to know that Miss Ianello has done all this stuff with her life and she’s helping us now. For her, to do all these great things and then have her help our basketball team, it’s an awesome thing.”

She gave Peyton Metzger, a senior forward, one specific piece of advice.

“Confidence,” Metzger said. “Really be confident in what you’re doing, no matter where you’re doing it.”

Brooks said that after the students attend basketball games, many of them swarm to the players the next school day and ask about Ianello. There’s a level of respect among the Red Devils for Ianello’s knowledge, her basketball resume and the energy she brings to the program.

“They want to know who she is, and about her background,” Brooks said. “The parents, too. They’re curious. They all say, ‘What’s it like having her there, on the bench?’ They always ask, ‘Is she the parent of anyone on the team?’ They always see her, screaming on the bench and they ask, ‘Do you like her?’

Most importantly, Zach has learned why his mother’s perspective and her voice are valuable to the Red Devils, and in basketball.

“It really shows it doesn’t matter where you’re come from, your race, your gender,” Zach said. “You can do anything you want. My mom lives and breathes basketball. I joke with her that she is never going to retire, because she loves the game so much. It motivates me because seeing her, I feel that I can do anything.”