A new and useful Winter Storm Severity Index (WSSI) is in the works. Before I get to that, we have some wintry weather to talk about later this week, with the coldest air mass of the winter on the way. This sharp hit will be fairly brief, as has been the case all winter long — so far. But you will take notice of the thermal impact, if nothing else.

On Thursday, a well-organized area of low pressure will be nearby, bringing two cold fronts across our region:

High temperature readings by Friday will be struggling to reach the low teens. So far, we’ve had no days with a high below 20. By Saturday we should already be heading up to near average, around 32:

It is highly speculative to get into potential snow accumulations so far in advance. But, for what it’s worth, the Sunday overnight European/ECMWF model brings snow in Wednesday night into Thursday. That scenario would mean the steady snow wouldn’t arrive until after the Wednesday afternoon commute, and the biggest impact would be during the Thursday morning commute, with snow diminishing to snow showers for the afternoon and evening. Current indications point to just enough wind for fairly minor blowing snow, as per last Friday. But the ECMWF does suggest moderate to marginally heavy accumulations, with the heavier snow to the south. Again, this is quite PRELIMINARY.

I will update this early forecast in the comments section below the article as necessary.

Back to the Winter Storm Severity Index, which has nothing to do with naming winter storms. (I never participated in that Weather Channel exercise, which continues.) The WSSI is a still-experimental program to assign numerical categories on storm impact ranging from limited to the rare extreme. This is something akin to the wind categories with hurricanes and for tornado damage. The index is currently supervised at National Weather Service headquarters, at its Weather Prediction Center in Maryland. The National Weather Service is having 116 NWS local forecast offices internally work with and fine-tune this communication tool. In this image, you’ll see the Monday-Wednesday expected impacts for our part of the country. As the week progresses, the impact will increase for the Tuesday-Thursday and Wednesday-Friday periods due to the Thursday storm system:

Zoomed in, this is the broad index: 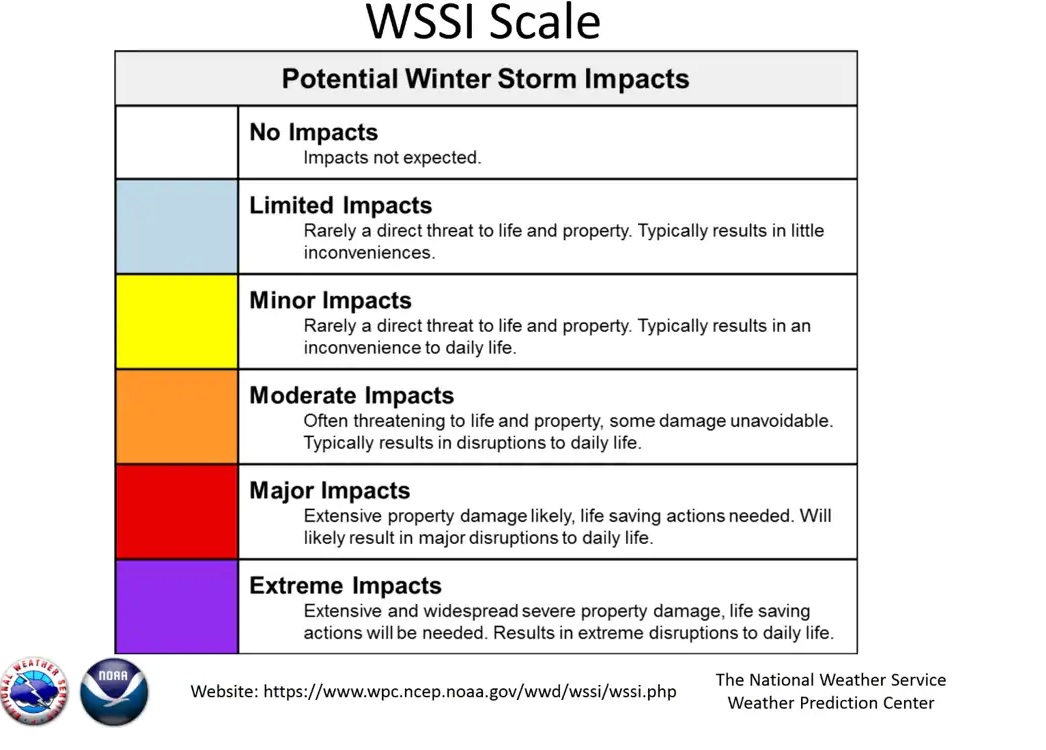 The WSSI is a tool which offers improved perspective to the public, emergency managers, and private sector forecasters. It’s not designed to project precise snow accumulations, which will almost never be as precise as some people expect. It’s designed to reach more forecast users with threat analysis. Local NWS offices will take into account the history of impacts and local climatology for their forecast area. For example, due to the tremendous traffic density, it takes far less snow to have a disruptive or paralyzing impact on Washington, D.C., than it does for Buffalo. The D.C.-Baltimore office is fully aware of that, and will factor such elements into their WSSI. Buffalo’s office will do the same for our WSSI.

Other storm elements will also be blended into these coming WSSIs. Strong winds and blowing snow can multiply storm impact many times over a calmer storm. The record 82” of snow which fell during Christmas week 2001 was accompanied by far less blowing snow (and, therefore, was not a blizzard) than the Blizzards of ’85 and, of course, ’77. Timing, day of the week, precipitation type changes from freezing rain to snow or vice versa, and ice accumulation are all elements NWS forecasters will have to consider.

The WSSI will not be a panacea, but it will provide a very valuable numerical heads-up to forecast users. By itself, it’s not designed to make school closing decisions for school superintendents. However, if a superintendent sees 3/moderate impact, that’s a real heads-up to pay close attention to the forecast. And if a less common 4/major or rare 5/extreme classification is used, THEN the decision should be much more obvious to administrators, highway departments, the transportation sector and businesses. Impact forecasting is not new, and is already factored in by both the NWS and private sector meteorologists like me in wording our forecasts and discussions. I wrote about impact forecasting more than 2 years ago.

Making impact forecasting more accessible and somewhat easier to consider is the goal behind the WSSI. I’ll give one last hint about this upcoming Wednesday night-Thursday system. It’s early, but I’m confident if WSSIs were being issued, we’re not heading into a 4 or a 5 this week.