It was a secret to all but a few people with long memories in the Town of Amherst.

In 1964, crews working to build a new roadway on the University at Buffalo’s Main Street campus dug up several graves. What was all but forgotten was where the remains were unceremoniously reburied.

In two locations on and near Amherst’s Audubon Golf Course.

Now, the town is figuring out what to do to give the dead a proper final resting place.

"This is what it is. We have what we have. Now, what do we do, and how do we do it in the right way?" Amherst Supervisor Brian J. Kulpa said.

Working with Forest Lawn, town officials think they have the answer: The town would leave the burial sites untouched and incorporate them into a proposed Amherst memory garden covering the eastern section of the golf course on both sides of Ellicott Creek. It's envisioned as a modern cemetery for cremated remains only – no traditional burials – with botanical-garden landscaping, winding paths and GPS technology.

It reflects Forest Lawn's founding philosophy, said President Joseph P. Dispenza, "that as long as the dead are surrounded by the living, we can ensure they will never be forgotten."

The Town of Amherst's Audubon Golf Course finishes with an 18th hole that runs west along Maple Road toward the course's clubhouse. It's a gently curving par 4 lined with trees that ends at a green guarded by two sand traps.

But few people knew what was underground until recently.

Hundreds of human remains are buried in an area near the tee boxes that extends toward the fairway. The bone fragments and other materials were reburied at the 18th hole and another site just north of the 14th green in 1964, shortly after they were discovered by contractors working at the University at Buffalo's Main Street campus.

The university has exhumed the remains of hundreds of former almshouse residents during construction work dating back to the 1930s – a regular occurrence in Buffalo and other old Northeastern cities. 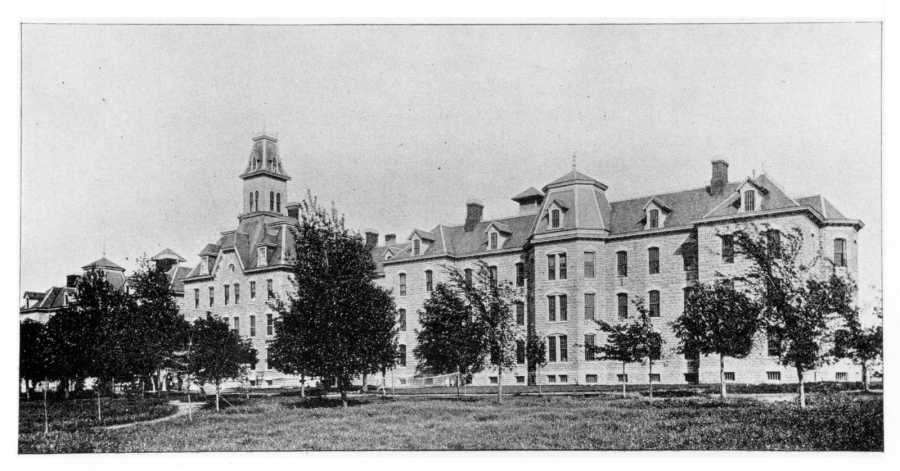 The Erie County almshouse, or poorhouse, operated on Main Street near Bailey Avenue from the 1850s to 1909, when the then-private University of Buffalo bought the property.

Records show at least 11,000 people died at the almshouse during its years of operation, and thousands of bodies that weren't claimed by a relative were buried at a cemetery there.

This potter's field roughly occupied a 2-acre section along Bailey Avenue at Michael Road, just south of what is now a campus child care center and across from Grover Cleveland Golf Course.

As construction has taken place on the site, crews have discovered bone fragments, bits of clothing and pieces of wood coffins buried in the ground on at least 44 occasions, according to a 2012 UB report.

UB isn't alone. For example, a mass grave was discovered in 1924 at Delaware and Hertel avenues, where thousands of remains had been moved in the 1890s from the former High Street Cemetery at the current City Honors School. Those remains were reburied at Forest Lawn.

And about 300 unidentified War of 1812 soldiers who died of disease and exposure in the middle of what is now the Delaware Park golf course were buried there in a mass grave, with only a plaque on a small boulder now marking the city's Tomb of the Unknowns.

"This is not an uncommon occurrence in the cities of the East Coast," Dispenza said.

What's considered an acceptable way to handle these remains has evolved over time.

When crews in 2008 and again in 2012 recovered the remains of 372 people from the UB South Campus burial site, the remains were carefully exhumed and analyzed in a process overseen by UB anthropologists.

The university in 2017 reburied them at Assumption Cemetery on Grand Island, where it held a memorial service to honor the almshouse dead.

In 1964, crews constructing Clement Road, just to the east of Bailey Avenue on the almshouse cemetery site, discovered human bones inside three graves about 4 feet deep, according to news reports. This brought work to a halt until school officials, with the blessing of the Erie County medical examiner, could determine what to do with the remains.

The situation was largely forgotten until, in 2012, UB attempted to pin down precisely where the remains were taken all those years ago. 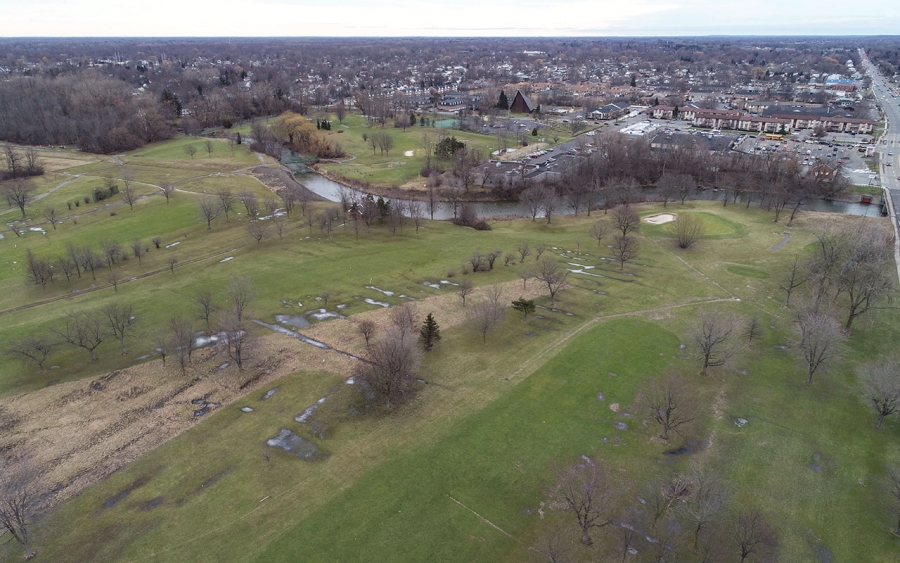 UB was already working closely with Forest Lawn to figure out how best to process the most recently discovered remains and sought the organization's help with the 1964 reburial. They reached out to James Eisenmann, a retired UB public safety officer and former member of the university's grounds crew who said he witnessed the reburial of remains.

The university determined Eisenmann likely was referring to the 170 remains discovered in 1964 during the excavation for Clement Road.

UB and Forest Lawn officials accompanied Eisenmann in July 2012 to Audubon Golf Course, which was briefly owned by the university in the early 1960s before it was sold back to the town.

There, Eisenmann pointed out the two likely reburial sites "with a high degree of confidence," according to a confidential fact sheet prepared for a 2013 joint UB-Forest Lawn meeting on the issue.

The document states that about 500 cubic yards of material – including crushed bones mixed with earth and fragments of wooden coffins – were taken from the South Campus and bulldozed into a common grave near the present-day 18th tee at Audubon.

This wasn't done with malice, Dispenza said, but it reflects the mores of the past.

The second possible location is just north of the 14th green and the Ellicott Creek trailway, off North Forest Road. A map prepared by Forest Lawn and UB puts it somewhere along a tree-lined berm just south of a home on North Forest owned by Ross Winston.

He was surprised to learn last week from a News reporter of the possibility that remains are buried on the edge of his sprawling backyard.

"That's something you would never consider when you're buying a home: Are there bodies buried there?" Winston said.

Audubon Golf Course has remained in use for decades since the reburials, though the course has struggled financially at times. Town officials today are weighing options that include closing it or shrinking its footprint.

At the same time that UB brought in Forest Lawn to help it deal with the South Campus remains, the owners of the Westwood Country Club in Amherst proposed swapping the former country club with the town's golf course.

Mensch Capital Partners' ambitious plans for Audubon included, coincidentally, a 40-acre cemetery and gardens, even though it doesn't appear the partners knew about the almshouse remains on the site.

This deal fell apart, but by 2019 the concept of a land swap was revived by Westwood owners Mensch Capital Partners and Amherst officials.

By then, Dispenza said, he thought it was time to tell Kulpa and town officials what was under the ground there.

Amherst is – unwittingly – "basically operating a cemetery," Kulpa said, but that's not a role it wants to have.

The town, working with Forest Lawn, came up with a concept that would leave the remains undisturbed while transforming that entire section of the golf course into a modern, park-like cemetery. Kulpa said it's meant to be both a final resting place and a space for the living, similar to the connection between Delaware Park and Forest Lawn.

This memory garden would receive cremated remains only, not bodies in caskets, and it would not have headstones or bronze markers.

Instead, the names of the deceased would be carved into granite curbs and relatives would use smartphones and GPS technology to find where their loved ones are buried.

Winding paths and extensive plantings of flowers, shrubs and other flora would encourage year-round use of the cemetery.

"Amherst needs a park. It has many parks, but it doesn't have a gardens," Dispenza said.

Amherst would transfer the land to Forest Lawn, which would work with the town and developers to build the memory garden in phases once the state's Division of Cemeteries designates the property as a cemetery.

Dispenza said he hopes the first phase could be done within 24 months, but it's not clear how much the work would cost or where the money would come from.

The memory garden would cover 30 acres on both sides of Ellicott Creek on the eastern end of the course, north of Maple Road and west of North Forest Road. That's roughly the 14th, 15th, 16th, 17th and 18th holes.

It would be a key part of the town's proposed Amherst Central Park in the area between Sheridan Drive and the UB North Campus.

"It would be a beautiful cemetery," said Judith Ferraro, a leading community activist and advocate for preserving green space in Amherst. "Well, you know, people need to see exactly what this is and how it fits into the grand scheme" of the Central Park development.

The town also is considering turning an adjoining section of the golf course – centered on the current Audubon clubhouse, parking lot and driving range – into a three-hole mini course surrounding a high-tech driving range, Kulpa said. If this or the garden is built, Audubon would no longer function as an 18-hole course.

"Let's find a good way to move forward," he said.