From Ange Coniglio's earliest West Side memories, Canada never felt like another country.

Born in 1936, he grew up at West Avenue and Breckenridge Street, his front door a few minutes away from the Niagara River and the childhood pull of all the mysteries on the other side. He was only 7 when his dad was killed by a hit-and-run driver at West Ferry and Niagara streets.

Coniglio's mother, Rosa Alessi Coniglio, was a Sicilian immigrant left to raise nine children by herself. For the kids, amid the Great Depression, struggle created independence. Before long, Coniglio was taking boyhood walks across the Peace Bridge with his buddies to go swimming in Fort Erie. In a way, the periphery of those walks in the 1940s helped set the lasting boundaries of his life.

“One time,” he said, “we walked to Crystal Beach.”

Almost 80 years later, that is still where Coniglio and his wife, Angela, spend half the year. Thursday, he reacted with startled frustration when he learned the federal Department of Homeland Security will no longer approve "trusted traveler" status for New Yorkers in such programs as NEXUS, which make it easier and quicker for returning Americans on crowded international bridges.

To Coniglio, like many in Buffalo, the Peace Bridge is personal.

“This is just a disaster,” he said, echoing bridge administrators and other regional officials. "I hope we can do something to work it out."

In Crystal Beach, the Coniglios settle into a cottage built long ago for workers at the now-shuttered amusement park the couple loved. In the winter they live in Eggertsville, looking forward to the spring day when they can return.

Before this week's furor, people would ask if bridge slowdowns made all the back-and-forth feel like a nightmare, and Coniglio's response was always "absolutely not."

That was mainly due to his NEXUS card.

“If I’m over there and I need something from Home Depot, guess what?” Coniglio said. “I get in the car and I go. It’s no different, no longer, than if you live in Lancaster and you need something in Hamburg or Orchard Park.”

He has no doubt the federal crackdown will dramatically change such casual routines. He and Angela are both a few months away from needing to renew their cards, and the Trump administration has already said New York residents will be ineligible when they reapply. Gov. Andrew Cuomo responded Friday by promising to challenge the ruling in court.

The argument boils down to this: Under New York’s new Green Light Law, which allows undocumented immigrants to obtain a driver’s license, the state prevents federal access to Department of Motor Vehicle records. Homeland Security officials say the law blocks them from viewing critical DMV information that has directly helped in apprehending suspects at the border involved with serious crime.

In response, many officials – including Buffalo Mayor Byron Brown – contend that rigorous standards for applicants undercut federal arguments of any risk. The action, Cuomo argues, is political payback for the law itself.

Coniglio tries to stay away from the fury of the larger debate, choosing to serve more as a voice of everyday Buffalo logic. To receive a NEXUS card, Coniglio said, you need to provide full access to such personal documents as a passport and a birth certificate, and then sit down for one-on-one interviews with customs officers. He said it is hard to imagine that someone without documents would risk that process.

He is especially perplexed by one point, both for himself and tens of thousands of New Yorkers in the same predicament: If he submitted all his paperwork and was deemed safe for years – knowledge certainly preserved in a database – he cannot fathom why he would suddenly be unsafe at 83.

"There is no valid answer," he said, "to how rescinding the NEXUS card of someone who has already been prescreened makes our state or nation more secure." 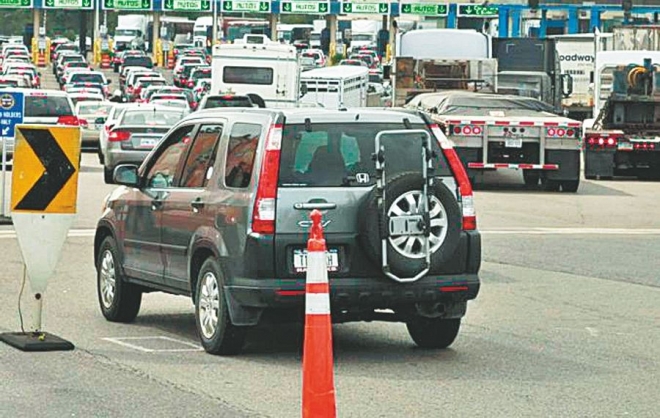 Hard day at the Peace Bridge: Fear that restrictions on trusted travelers will cause a leap in these backups. (John Hickey/News file photo)

He sighed, noting that his wife was out bowling. “I hope she had a good day,” he said, because he already had a pretty good notion of how she would react to the news.

They met when they were children, a few years after Coniglio’s dad died at the intersection where the son always honks his horn in tribute, even now. Coniglio and his wife-to-be lived a few houses apart, and they were friends long before that bond blossomed into lifetime romance.

Angela would stop by his house to pick him up for school in the morning, and Coniglio would hear his Sicilian-born mother, a little peeved at this neighborhood girl who was looking for her son, say in the English she was still learning to speak:

Telling that story, Coniglio laughed long and hard. As they prepare to celebrate Valentine’s Day next week, he and Angela — a couple that has traveled back and forth to Canada too many times to count – have been married for 59 years.

As a kid, in the same way as countless children on the West Side, Coniglio would pay a nickel to cross the Peace Bridge by foot and swim at a spot known as the “Baby Hole.” Later, as a member of the Tau Zeta Tau fraternity at Lafayette High School, he and teenage buddies whom he still often meets for breakfast used to rent a Canadian cottage “to drink beer and chase girls and shoot the breeze.”

At the University at Buffalo, his study of civil engineering made him the first of his siblings to earn a diploma, even while "my mother always asked why I didn't just get a good job at Chevy, like my brothers.”

Coniglio became a scholar on Sicilian heritage, as well as a passionate historian of the Buffalo Bills and the old American Football League. At home, he and his wife raised two children, whom they named – what else? – Angelo and Angela.

Almost every weekend, the little family drove back and forth to Crystal Beach. For a time, they shared a summer place owned by another couple with the same two names, meaning there were three Angelos and three Angelas in the house. Five voices would answer if someone called out "Ange!"

The brilliance of those memories now helps to sustain him. The Coniglios would endure the loss of both their children. Their son, who suffered severe spinal cord injuries in a 1984 hockey accident, died in 2015 from related complications. Their daughter – “a wonderful athlete, brilliant, a beautiful person,” Ange said – took her own life in 1996.

Coniglio remembers how his mother, alone in a new city, responded to her husband's death. She kept loving, kept going and never forgot how to laugh, something Coniglio does often and with passion. He has dozens of nieces and nephews, and he makes sure he knows each of them – and each of their many children and grandchildren – by name. He has learned how the presence of family and friends serves as both faith and medicine. 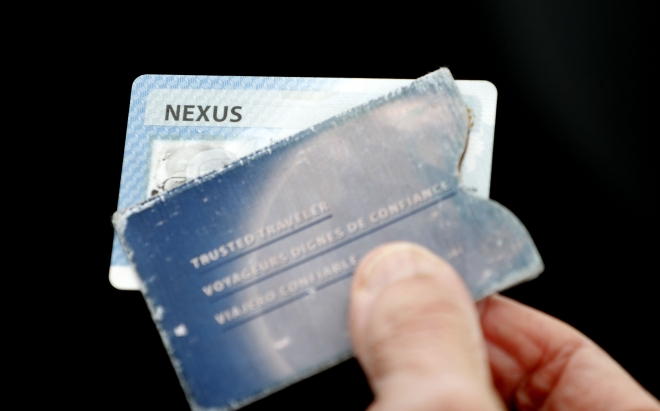 In Buffalo, like so many others, he hardly sections out his life by borders. Canada equates to home, a place of peace and solace. The Coniglios live in their cottage until cold weather sends them back to this side, and even in winter they might cross over three or four times a week.

“I tell people we’ve got the greatest beach in North America, and when they say that’s ‘Canada, not Buffalo,’ I say they don’t understand,” Coniglio said. “That beach, even now, it’s the favorite part of my life.”

Getting there without NEXUS looms in his 80s as an unexpected obstacle. Beyond the arguments at the core of the dispute, Coniglio interprets it as another part of a political dynamic in which two halves of this nation always seem to be going for each other’s throats.

“I know with this, one side will blame Trump and one side will blame Cuomo,” he said. “Me, I don’t care who you blame. I’m just saying that to tell someone who’s had a privilege for years and years that all of a sudden they can’t have it anymore, it’s just ridiculous. It doesn’t make any sense at all.”

And Ange Coniglio, seeing no other choice, simply laughed.